The Raspberry Pi is an absolutely incredible little computing machine. Powered by Linux, if there’s an idea that you can think of, chances are, you’ll be able to use a Raspberry Pi to get it done. But there will be times when you need to find the best Raspberry Pi cases, especially if you don’t want to use the ones included with the best Raspberry Pi kits. We’ve rounded up some of our favorites, but really, there are so many great options at your disposal.

The Raspberry Pi 4 is the newest standalone board to be released, making it the obvious first choice for everyone. But once you’ve acquired the board, you might want to start looking at some different cases, and thankfully, there are plenty of options to choose from. Ranging from just having a basic case or using one that provides the ability to add an NVME M.2 SSD to your Pi, there’s something here for everyone.

If you’re not looking for a bunch of extra frills with a case, like being able to add an SSD or anything else, then the Flirc Raspberry Pi 4 Case is the way to go. The case is made from aluminum and features a built-in heat sink. Plus, there’s an additional thermal pad included to help keep your Pi 4 cool. 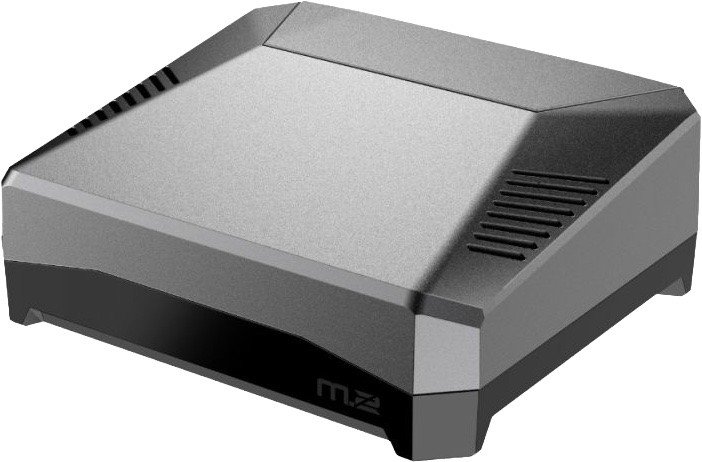 Argon makes some of the most sleek-designed cases for the Raspberry Pi, but the Argon ONE case takes things one step further. With this case, you can add an M.2 NVME SSD to your Pi, providing extremely fast storage speeds that a microSD card can’t match. There are even multiple power management options and an IR scanner built-in. 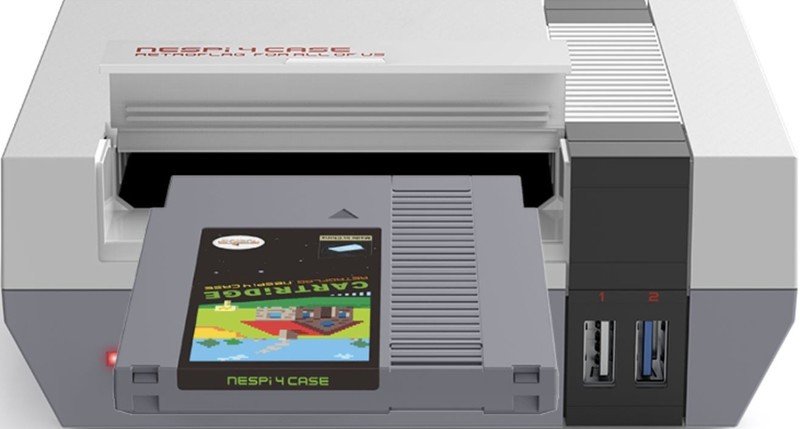 It was only a matter of time, but we’ve made it to the first retro-gaming case from Retroflag. As the name suggests, the NESPi 4 case is only compatible with the Raspberry Pi 4. But that removable cartridge to give you all of the NES vibes? It doubles as a standard SSD case that plugs directly into your Pi for faster and more reliable storage. 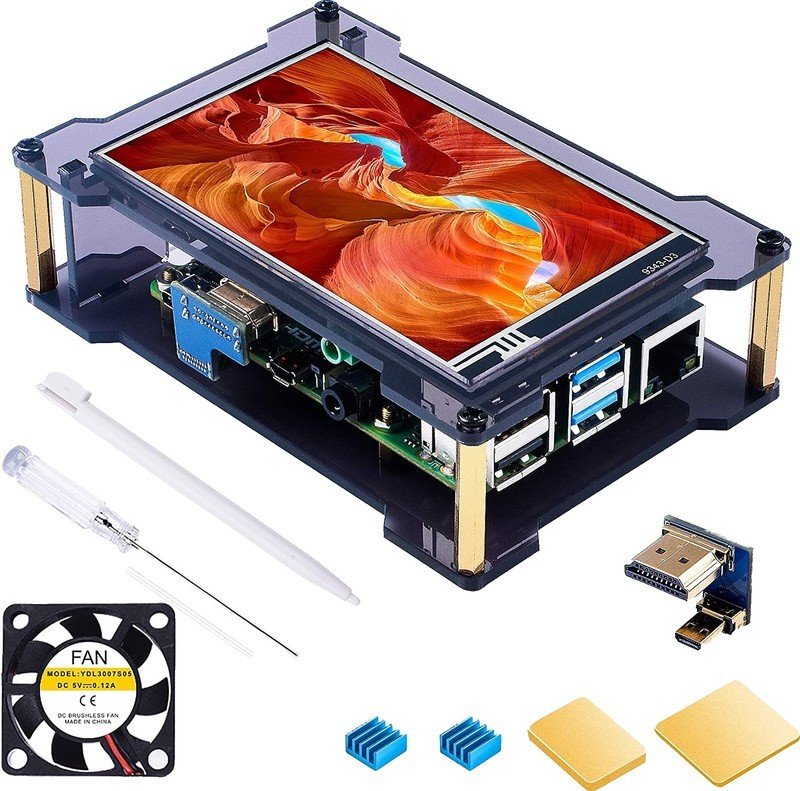 What’s the point of having a computer the size of a credit card if you aren’t going to take it with you? With the Miuzei Touchscreen Case, you can do just that, and you’ll be able to use the included stylus to interact with your Raspberry Pi interface. The 4-inch display can put out a resolution of 800×480 while also supporting refresh rates up to 60fps. 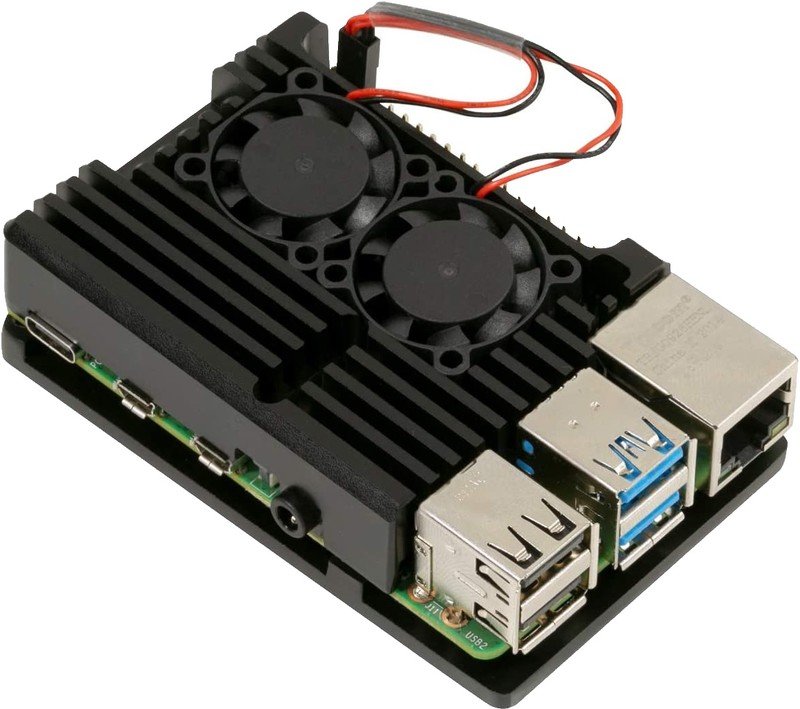 If you’re worried about heat dissipation and keeping your Raspberry Pi 4 cool and protected, the UCTRONICS Armor Case is intriguing. The case is made from an aluminum alloy while featuring heatsink “pillars,” built-in and designed to dissipate heat faster than normal. Plus, UCTRONICS includes two fans that quickly plug into your Pi board to help with the cooling process. 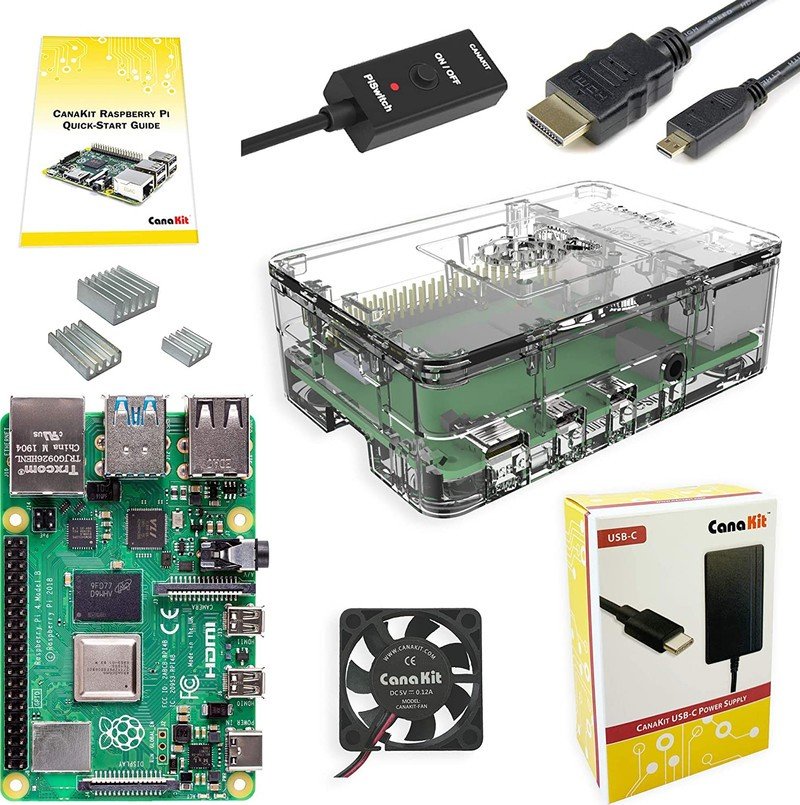 So you don’t have a Raspberry Pi yet, and you don’t know where to start, but you know that you need everything. There are some really great Raspberry Pi kits out there, including this one from Canakit. In the box, you’ll get a Raspberry Pi 4, heat sinks, a fan, microSD card, power supply, micro HDMI cable, and a basic matte black case. It really has everything you’ll need to get up and running without trying to find the “right” parts.

The Raspberry Pi 3B+ continues to be one of the most popular boards, despite being released a few years ago and superseded by the Pi 4. However, if you already have a Pi 3B+ and want to upgrade to a newer case, we’ve got you covered with some pretty great options. 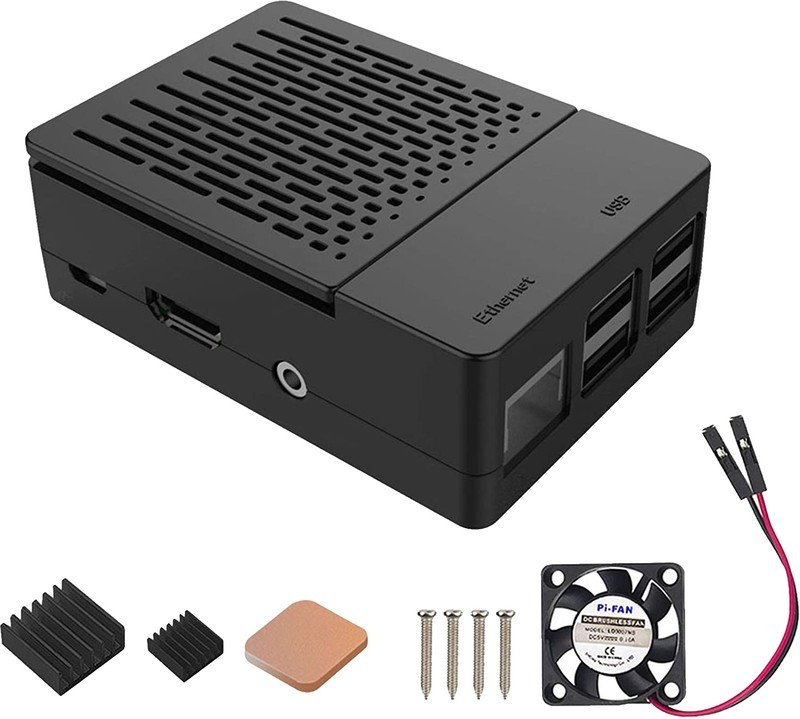 Although it’s not the latest version, the Pi 3 B+ is still extremely popular. For those who already own or will get the Pi 3B+, this ABS Case from iUniker is great. The company includes a thermal pad, two heat sinks, and a 30mm Quiet Cooling Fan, giving you everything you need to pop in the Raspberry Pi and get going. 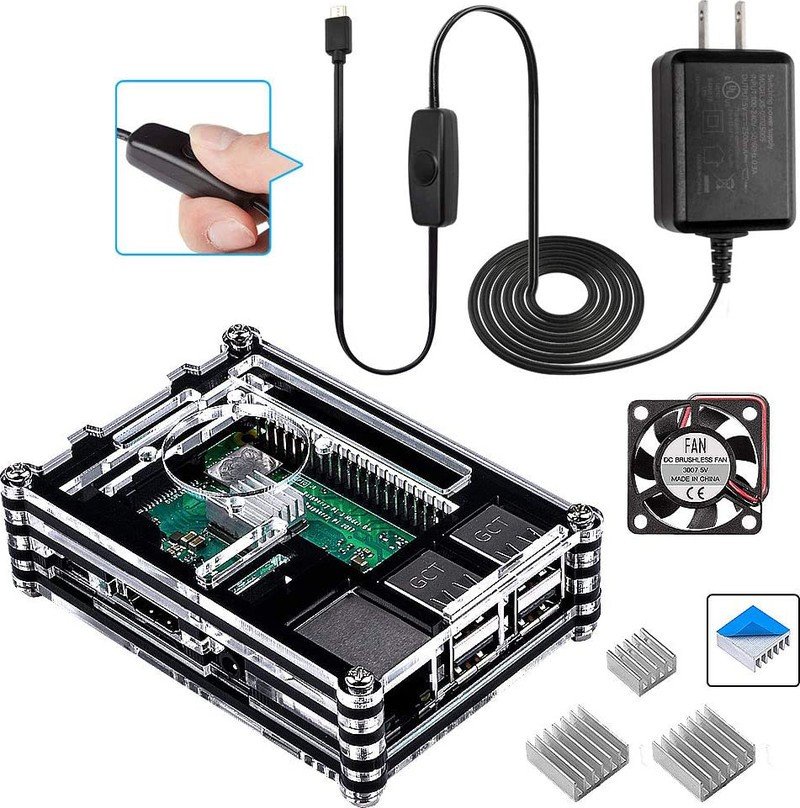 One of the awesome things about Raspberry Pi cases is the ability to have a clear view of the Pi itself, along with the IO and circuit board. This case from Smraza fits the bill with its clear design, showing off everything on your board, while including a few heat sinks and a power supply with a long cable.

Before there was a Flirc Raspberry Pi 4 case, the company released a similar option for the Pi 3B. The case is made from aluminum and sports a built-in heat sink to go along with the included thermal pad. If you’re looking for a case with a minimal footprint and design, this is the way to go. 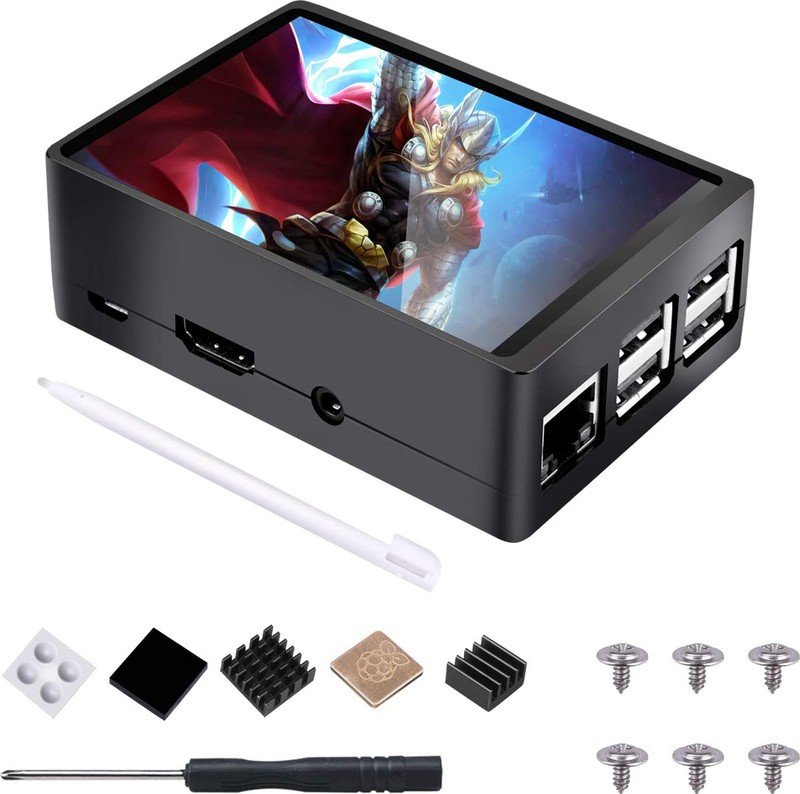 The STARTO TFT Case may not look all that different from other options until you look at the top. With this case, you’ll get a 3.5-inch touchscreen display, along with an included stylus so you can always have a display plugged into your Pi. 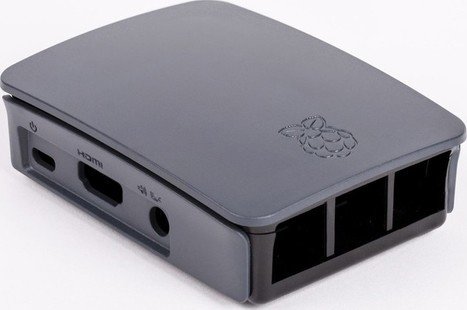 Raspberry Pi makes some cases of its own to pair with the various Raspberry Pi models available. You won’t find any case fans or anything else here, but you will be provided with an easy-to-install solution, along with plenty of access for your various ports. 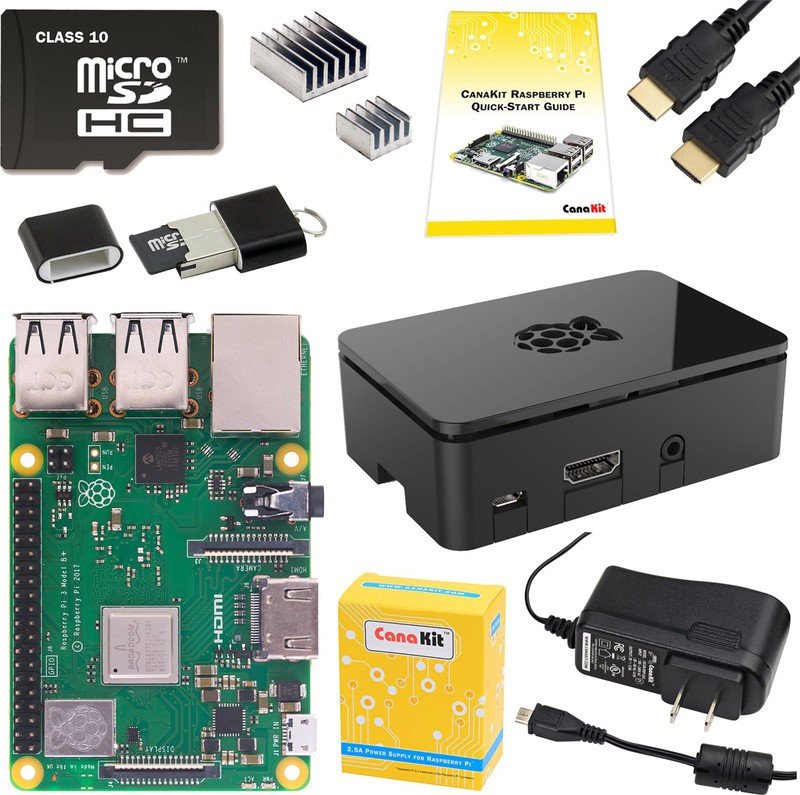 The Raspberry Pi Zero and Pi Zero W are the smallest Pi boards available. This makes these boards perfect for those projects that you don’t need physical access to, but it also means that they are a bit more susceptible to accidental damage. To ensure that doesn’t happen to your Pi Zero, grab one of these cases. 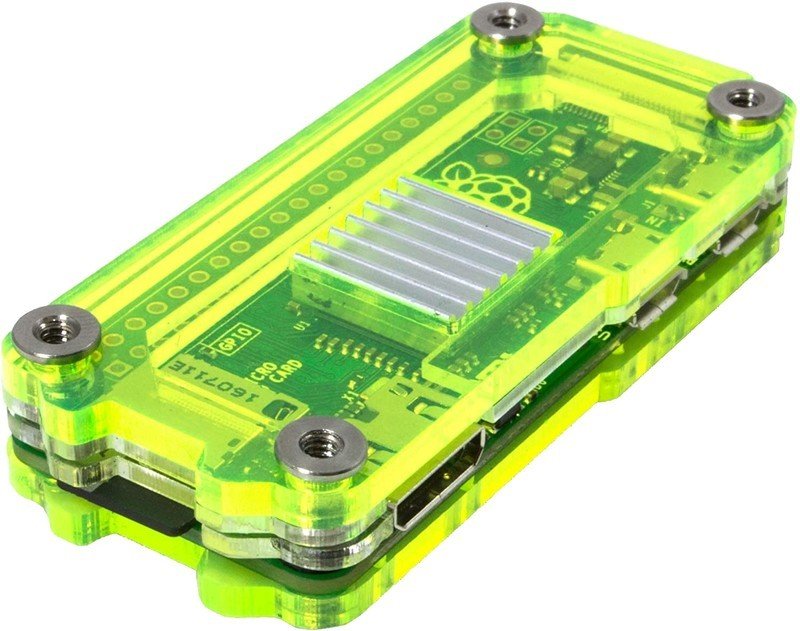 The Raspberry Pi Zero is the smallest fully-functional Pi that you can get, which means that you’re going to want to get a case to keep it protected. The Zebra Zero case is made from plastic and stainless steel, including a heatsink that fits perfectly. 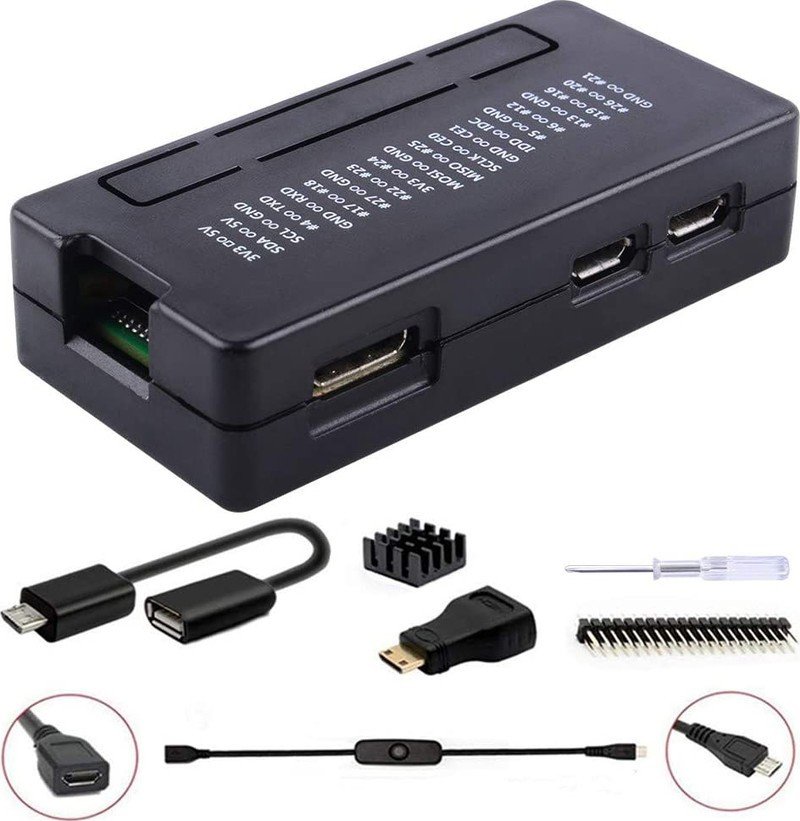 Most starter kits include the Raspberry Pi that you might want, but this Starter Kit from GeeekPi assumes you already have the board. Along with the included case, you’ll get a heat sink, GPIO header, HDMI adapter, power switch cable, and an OTG cable. Just throw in your Pi Zero or Zero W, and you’ll be ready to go. 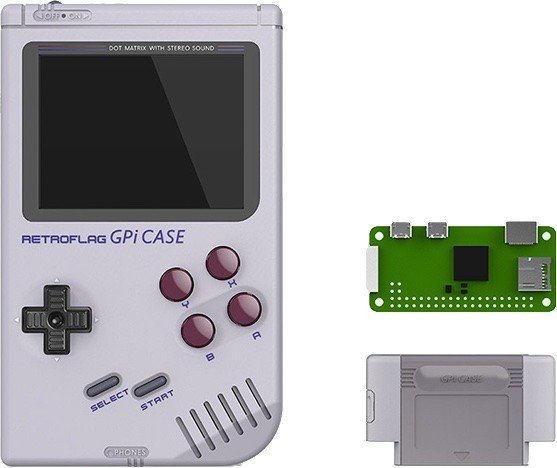 It’s cool and all to whip out that old GameBoy and use it while you’re out and about, but it can be a pain having to change out the game cartridges all the time. With the Retroflag GPi case, you won’t have to worry about that anymore. Now, you can have access to all of your games, from wherever you are, all while making use of the power of a Raspberry Pi.

There aren’t too many differences between the different Raspberry Pi boards, but there are enough to warrant different cases to be available. However, some companies have provided all-in-one solutions that allow you to use practically any Raspberry Pi board that has been released, and we’ve rounded up some of our favorites. 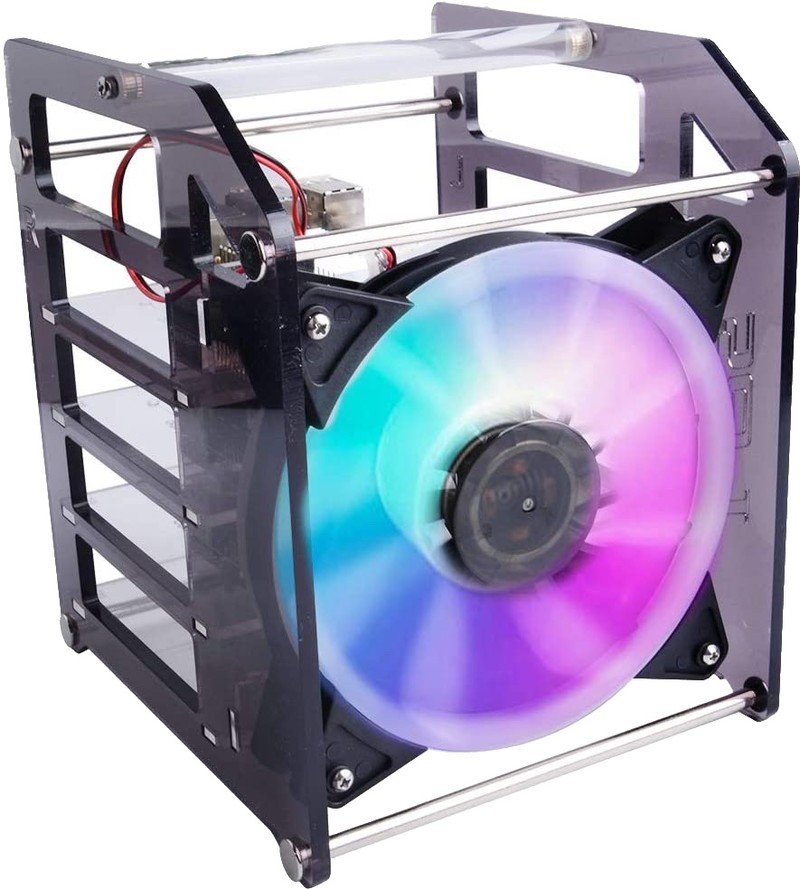 If you want to pair a few Raspberry Pi’s together, but don’t want four different cases, then GeeekPi has you covered with this new Cluster Case. On the front, you’ll find a sizable 120mm fan with RGB LEDs, which is sure to keep all four of the Pi’s cool. Plus, this case works with just about every iteration of the Raspberry Pi, save for the Zero W or Pico. 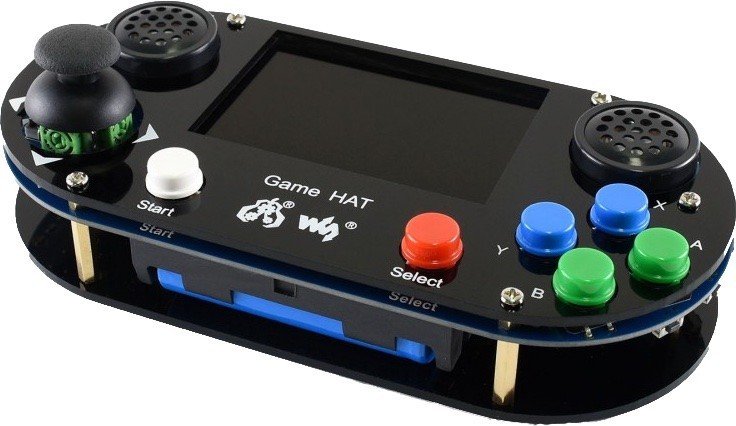 Rounding out the bunch is a unique portable controller case for the Raspberry Pi. Where the Waveshare Game HAT excels is that it’s compatible with most Raspberry Pi models, instead of being limited to only working with one or two. As you would expect, you put everything together from scratch, except for the built-in 480 x 320 display.

It’s already awesome to create a retro console with the Raspberry Pi, but with the Genesis Retro Brick Case from Retro Power, you can build the case too. Essentially, this is a Lego kit for Raspberry Pi, with 336 bricks to assemble while sporting a removable cartridge. Best of all, this case is compatible with every board ranging from the Pi 2B and the newest 4B board.

Get the best Raspberry Pi cases for your needs

If you’re looking for a no-nonsense and no-frills case that looks sleek, then the Flirc Raspberry Pi 4 case is the way to go. This case is made from aluminum and includes a built-in heat sink, while providing quick and easy access to the GPIO and other available connectors. Plus, there’s a non-slip bottom, so you won’t have to worry about your Raspberry Pi 4 accidentally falling off the desk or table.

Turning to those who use the Raspberry Pi 3B+, this may not be the newest Raspberry Pi model available, but it still works quite well. In that event, you’re going to want a case that works just as well as the Pi that it’s protecting, and that’s where the iUniker ABS case comes in. You’ll be equipped with a solid and sturdy case, featuring a rather large cutout at the top to accommodate the included 30mm Quiet Cooling Fan. And that top part of the case is easily removable if you need to get to the GPIO or one of the other connectors on your board.