MediaTek’s first foray into a proper flagship chipset in years comes in the form of the MediaTek Dimensity 9000. It’s a 4nm chipset manufactured by TSMC and packs a serious punch, featuring’s Arm’s most powerful Cortex-X2 core, an 18-bit image signal processor, Bluetooth 5.3 support, and much more. While we hadn’t heard what devices would run it yet, it’s now been confirmed that the Dimensity 9000 will debut in the OPPO Find X5 series. 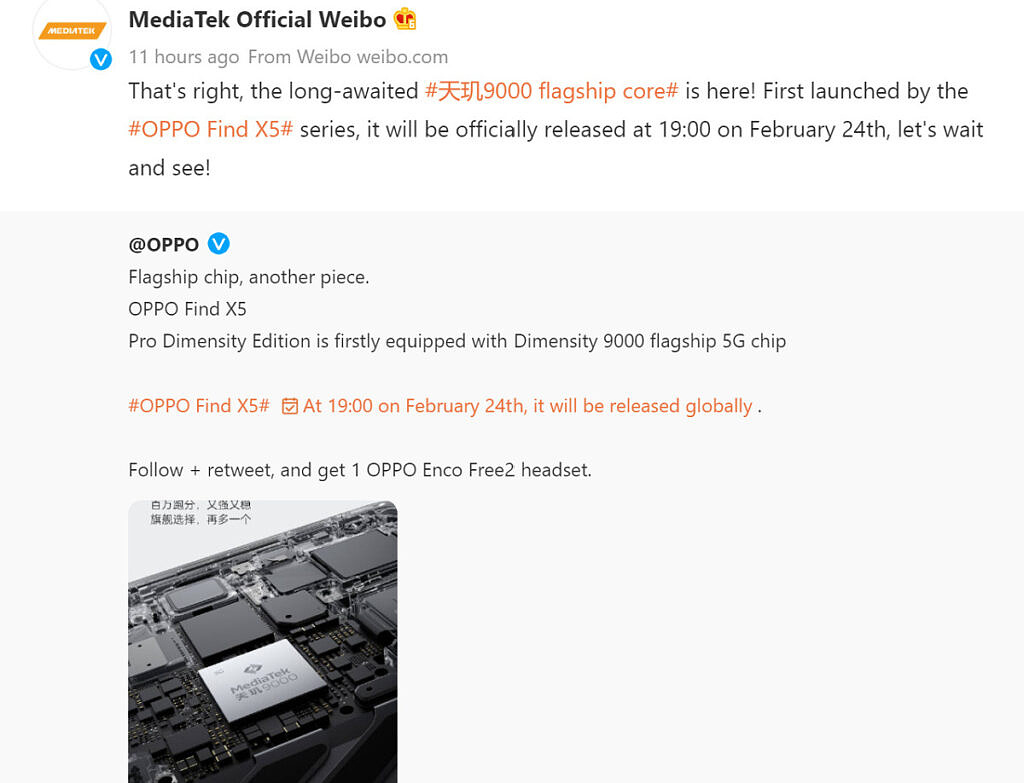 As posted on the official MediaTek Weibo account, the Taiwanese chipset company will debut the Dimensity 9000 in an OPPO Find X5 series device. While it may be a mistranslation (as the above image is machine translated by GizmoChina), it appears that there may be a specific Pro variant that packs this particular chip. That would make sense, as the Dimensity 9000 is actually supposed to be a Qualcomm Snapdragon 8 Gen 1 competitor.

Previous leaks are at odds with this confirmation from MediaTek, which would lead me to suspect that the Dimensity 9000 edition of the device may be a limited or later launch. From those leaks, we’ve heard that the phone will have a large QHD+ AMOLED LTPO display with an in-screen fingerprint sensor and a refresh rate of 120Hz, a 5,000mAh battery, and 80W wired fast charging support. There’s 12GB of RAM and 256GB of UFS 3.1 storage — the only model expected to be available in Europe.

OPPO also announced that it has partnered with Hasselblad, just like OnePlus. The cameras are expected to consist of two 50MP Sony IMX766 sensors (primary and ultra-wide) and a 13MP telephoto camera with 5x optical zoom. The device will also feature OPPO’s new MariSilicon X chip, which features a combination of an advanced NPU, ISP, and multi-tier memory architecture on one chip.

The company has announced that it will be showcasing new products at the upcoming Mobile World Congress trade show in Barcelona. We expect to see the new Find X5 series devices at the event, and potentially with a Dimensity 9000-powered device in tow, too.