MediaTek on Monday unveiled the M80, the company’s first modem with 5G mmWave support. The M80 is the direct successor to last year’s Helio M70 modem and will go head-to-head against Qualcomm’s X60 modem. The Helio M70 was the company’s first 5G modem, but it lacked support for mmWave bands. The M80 addresses this as it combines both mmWave and sub-6GHz on a single chip.

Similar to its predecessor, the M80 will be an integrated modem, meaning it will exist side-by-side alongside other components such as CPU, GPU, and ISP on the same die. The MediaTek M80 supports both non-standalone and standalone 5G modes with maximum theoretical download and upload speeds of 7.67Gbps and 3.67Gbps respectively. For reference, Qualcomm’s Snapdragon X60 is capable of reaching 7.5Gbps in downlink and 3Gbps in the uplink, while Samsung’s integrated 5G modem on the Exynos 2100 can hit 7.35Gbps in downlink and 3.67Gbps in the uplink.

“As 5G rollouts accelerate, mmWave is becoming increasingly important, especially in the U.S., MediaTek’s new 5G modem integrates support for both sub-6 GHz and mmWave networks to address this opportunity and give device makers more flexibility” 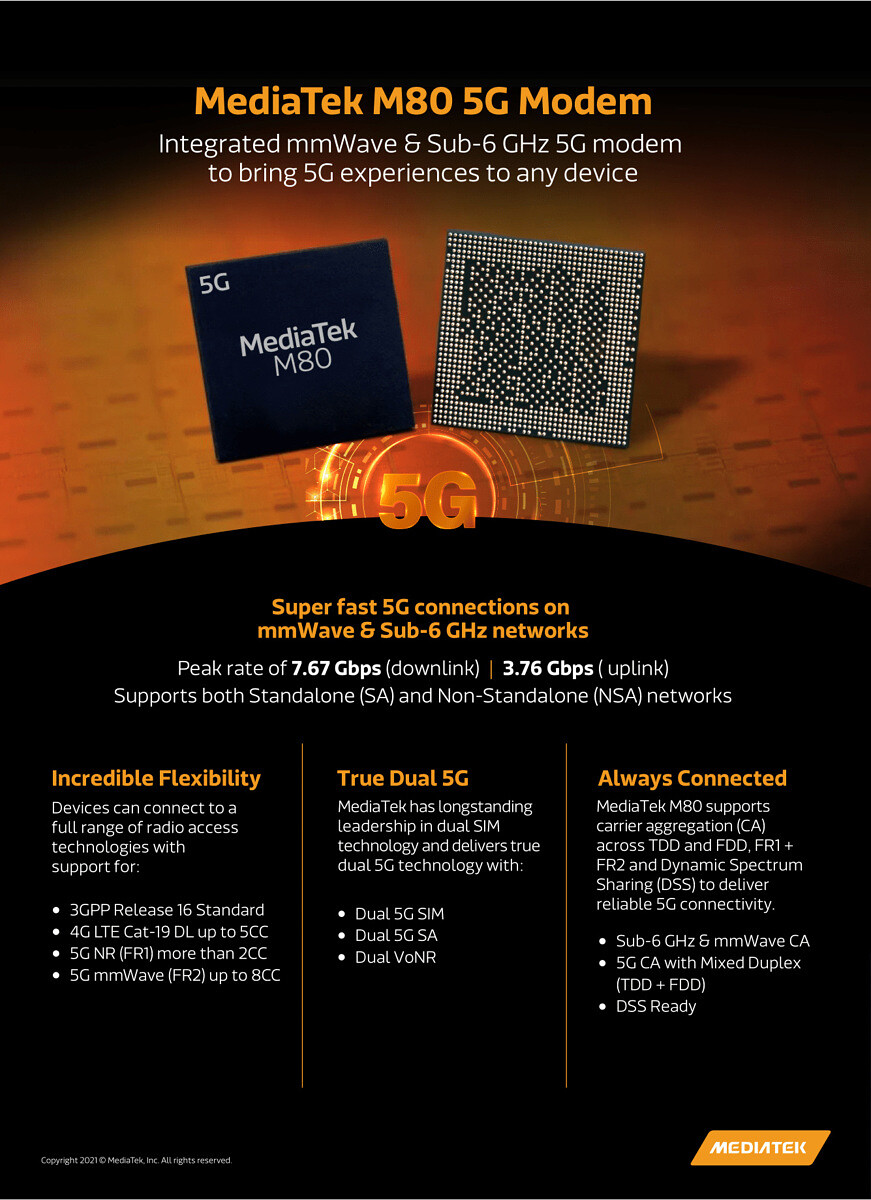 Other important aspects of the M80 modem include carrier aggregation (CA) across mmWave and sub-6GHz 5G bands and support for Dynamic Spectrum Sharing (DSS). Dynamic Spectrum Sharing is a technology that allows carriers to operate 4G LTE and 5G NR simultaneously on the same network band without having to reserve a chunk of spectrum for either 4G or 5G.

The MediaTek M80 will be sampled to customers later in 2021, so don’t expect a commercial device with this new modem to launch anytime soon. Similarly, details about which MediaTek SoC the new modem will debut on also remain unknown at this point.