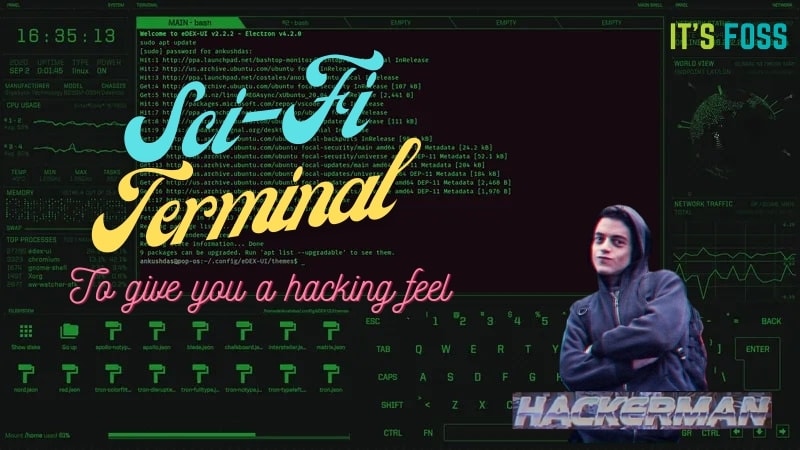 Brief: eDEX-UI is a cool sci-fi inspired terminal emulator that looks cool with a bunch of options like system monitoring. Here, we take a quick look at what it offers.

You probably already know plenty of fun Linux commands. You know what else can be fun when it comes to Linux command line? The terminal itself.

Yes, the terminal emulator (commonly known as terminal) can be pretty amusing as well. Remember the Cool Retro Term terminal that gives you a vintage terminal of 80s and early 90s?

How about an eye candy terminal that is heavily inspired from the TRON Legacy movie effects?

In this article, let’s take a look at an amazing cross-platform terminal emulator that can keep you drooling over your terminal!

eDEX-UI is an open-source cross-platform terminal emulator that presents you with a Sci-Fi inspired look along with useful some features as well.

It was originally inspired from the DEX UI project. It is also worth noting that eDEX-UI is no longer maintained but it hasn’t been completely abandoned. You can learn more about the current status of the project here.

Even though eDEX-UI is more about the looks and the futuristic theme for a terminal, it could double up as a system monitoring tool for Linux in the future if the development resumes or if someone else forks it. How? Because it shows system stats in the sidebar while you work in the terminal.

Let’s take a look at what else it offers and how to get it installed on your computer.

eDEX-UI is essentially a terminal emulator. You can use it like your regular terminal for running commands and whatever else you do in the terminal.

It runs in full screen with sidebars and bottom panels to monitor system and networks stats. There is also a virtual keyboard for touch devices.

I made a short video and I suggest watching this video to see this cool terminal emulator in action. Play the video with sound for the complete effect (trust me on this).

eDEX-UI has a directory viewer on the left bottom side.

A few hours after our coverage, eDEX put up a notice that the project is not actively maintained but it is not abandoned yet. More details can be found here.

As mentioned, it supports all the major platforms that includes Windows, macOS, and of course, Linux.

To install it on any Linux distribution, you can either grab the AppImage file from its GitHub releases section or find it in one of the available repositories that include AUR as well.

In case you didn’t know, I’d recommend going through our guide on using AppImage in Linux.

You can visit the project on its GitHub page and if you like it, feel free to star their repository.

I liked this terminal emulator because of the sci-fi inspired look. However, I found it pretty heavy on the system resources. I didn’t check the CPU temperature on my Linux system but the CPU consumption was surely high.

So, you might have to take care about that if you need it running it in the background or in a separate workspace (like I do). Apart from that, it’s an impressive tool with useful options like directory viewer and system resource monitoring.

By the way, if you just want to entertain guests and children with a hacking simulation, try Hollywood tool.

What do you think about eDEX-UI? Is it something you would like to give a try or is too kiddish/overwhelming for you?