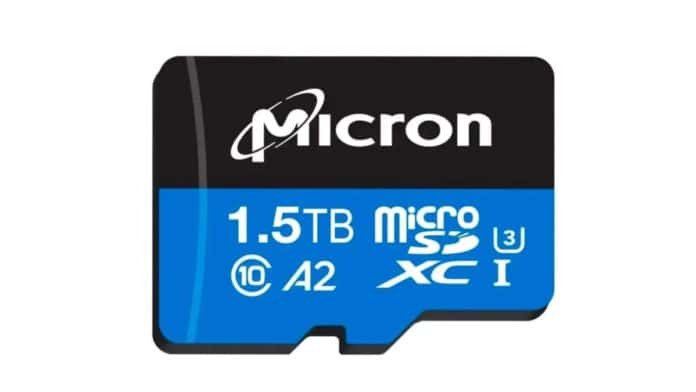 Micron Technology, Inc. on Tuesday announced the world’s highest-capacity microSD card with an extraordinary density of 1.5 terabytes (TB) at the Embedded World 2022 conference in Nuremberg, Germany.

Micron’s new i400 is the world’s first microSD card to use 176-layer 3D NAND storage technology with a focus on performance and endurance. It is specifically designed for edge storage applications with a focus on handling tasks like continuous high-quality video recording and multiple AI (artificial intelligence) capture events concurrently.

The U.S. semiconductor giant says the video security market is estimated to be worth $83 billion by 2030. Applications such as fleet dash cameras, smart home security, police body cameras and AI-enabled cameras in factories, and cloud-based video security as a service, or VSaaS, all need storage capable of handling media-rich data.

As the world’s highest-capacity microSD card, Micron’s i400 is preferably suited for video storage at the edge and hybrid VSaaS deployments. According to Micron, the 1.5TB microSD card can store up to four months or 120 days of video security media locally, enabling users to optimize what data is stored in the cloud.

Further, the high capacity of the world’s first microSD card eliminates the need to continuously upload data to the cloud for primary storage, a process that consumes network bandwidth and operational expenses, Micron said. Treating the i400 microSD card as primary storage to the edge enables real-time AI analytics and faster decision-making within smart cameras.

Moving further, Micron’s new i400 microSD card comes with five years of high-quality continuous 24×7 recording, the ability to concurrently handle 4K video recording, and up to eight AI events per second, such as object detection and classification like a license plate or facial recognition, and two million hours for mean time to failure (MTTF) rating.

Additionally, the company says that the cards are 5-proof protection encompassing water, shock, x-ray, magnet, and impact, and able to function at temperatures as low as -25 degrees Celsius or as high as 85 degrees Celsius (-13 to 185 degrees Fahrenheit). It also complies with SD3.0 and UHS-1 standards, as well as U3, Class 10, and A2 application performance.

“Micron’s newest high-performance, ruggedized solutions — our i400 microSD card for video security and automotive ASIL-D-qualified LPDDR5 — will unlock new value for businesses and drive the rapid innovation needed at the intelligent edge.”

Micron’s new i400 cards are now sampling to customers, including Verkada, a cloud-managed enterprise building-security provider. The card will be available in 64GB, 128GB, 256GB, 512GB, 1TB and 1.5TB versions. However, there is no information from the company on when the cards will go on sale, nor there are any details about pricing yet.