Last year, Microsoft announced it was working on a unified OneNote app for Windows, which would come in the form of a redesign of the classic OneNote app, superseding OneNote for Windows 10. While we still don’t know when the transition will be completed, Microsoft today announced that it will soon be rolling out major changes to the classic OneNote app, including a new design and new features to make the app more useful and modern.

For starters, there’s the visual refresh, which we already kind of knew about. In addition to the new ribbon, you’ll see that the navigation panes all have a refreshed visual design with more rounded corners, new icons, and other smaller tweaks. Microsoft is also bringing the Mica effect to the OneNote app in Windows 11, making it so that your desktop background shines through certain parts of the app window. There are also some more functional tweaks to the way the app looks, such as new unread indicators for pages with unread changes.

The new app will also have the option for a simplified ribbon, which compresses the available options so it’s more similar to the way OneNote For Windows 10 worked. This leaves more space for your notebooks, and it also makes the experience less complex if you only use a smaller set of tools.

Microsoft is also bringing over other features from the OneNote for Windows 10 app, like the ability to convert ink to shapes or text automatically. This is one of the few changes that’s already available, and it makes it so that when you draw a line or shape, OneNote can automatically render it with a cleaner look. It also does the same for text, so it’s easier to read.

There’s also the ruler, so you can more easily draw straight lines. Other features including a pencil and ink replay will also be coming over soon. For laptops that have dockable pens, there’s also a new pen focus view, which removes distracting elements of the UI so you can focus on drawing. 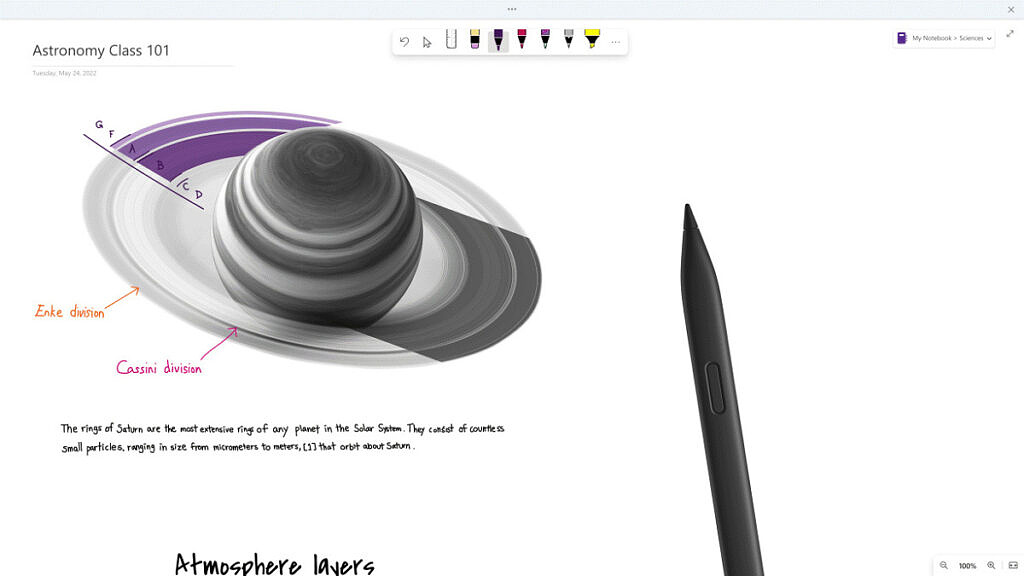 Something else that will be available is transcription and ink. With this feature, OneNote can record sound while you take notes, so if you’re in a class, you can jot down notes in the way that’s most convenient to you, and then see it later with the whole context of the class, making it easier to read and understand the notes.

It will also soon be possible to dictate text into OneNote so you can speak to write your notes. Dictation will also support the same features it does in other Office apps, so you can ask it to delete what you wrote last, for example. Microsoft is also making it easier to add pictures using your PC’s webcam directly in OneNote, so you can quickly scan an article or something else you’re reading, and if you’re an Office Insider, this is something you can try right now.

Finally, there’s the ability to sort your pages using a few different sorting methods – another one of the features that’s already available to everyone – and a new share experience that makes it easier to copy a link to the current notebook, send it to someone else, or manage who has access to it. This share experience is now available to Office Insiders.

Aside from the changes that are specifically mentioned as already being available, all of these are coming soon. It’s still unclear when we can expect them to arrive, but hopefully it won’t be much longer.