Last year Microsoft announced that it was increasing the number of emojis available to use as Reactions in Microsoft Teams.

The update would expand available reactions by allowing users to pick from >800 Teams emojis to express themselves the way they want when applying reaction to chat messages. 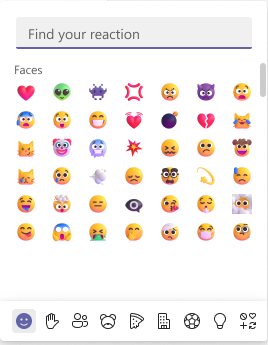 Use the search box to find/filter emojis.

The update was supposed to begin rolling out in mid-January and Microsoft expected to complete the rollout by late January for Standard users and reach DOD users by March 2022.

The update will be available for Teams desktop apps (Windows and Mac), Teams mobile (Android and iOS), and Teams on the web.