Microsoft has announced that it’s rolling out a couple of major new features for its Edge browser, including integration with Microsoft Editor, which was announced a few months ago. Additionally, there’s a new web select feature that makes it easy to copy content you find on the web, including tables.

Microsoft Editor integration is about what you’d expect. Editor is Microsoft’s rival to Grammarly, and just like its competitor, it’s usually a browser extension you can install. It provides the user with grammar and punctuation corrections and suggestions to make the text easier to read. Now, that functionality is built right into the Edge browser, so you don’t have to go through the trouble of installing the extension.

Editor in Microsoft Edge is available in more than 20 languages, but it will only apply to the main language used by your browser. In addition to grammar corrections, Microsoft says it will soon start rolling out text predictions in English, Spanish, French, Italian, and Portuguese, promising to make it even faster to write what you want to say.

The other new feature is an interesting one, and it’s something Microsoft announced two years ago. It’s called web select, though it was called smart copy when it was first announced. Essentially, this feature makes it easier to select formatted content on the web, such as tables, images, and text. You can quickly select entire paragraphs in their original formatting or copy only the cells you want to copy in a table, for example. You can then paste the content with its original formatting in OneNote or a Word document, for example. 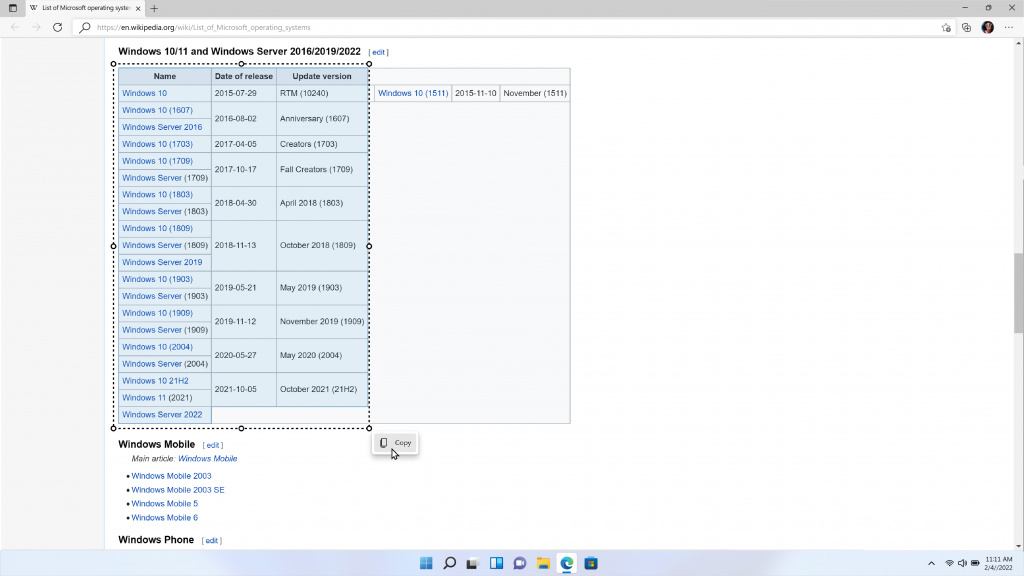 Selecting cells in a table on Wikipedia

Web select/smart copy first started being tested all the way back in November 2020, so it’s taken a long time to roll out to the general public. This isn’t to be confused with web capture, which lets you take screenshots of webpages and annotate them directly before sharing or saving them. That feature has been around for much longer, and it’s also slightly less impressive since it’s only a screenshot of the page.

If you want to try out these features, make sure you’re running the latest version of Edge by going to the three-dot menu in the top right corner and choosing Help & feedback -> About Microsoft Edge. These changes may take some time to show up for you, but rest assured they’re rolling out now.