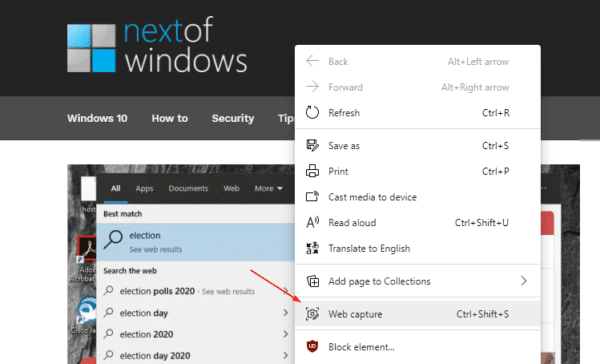 When it comes to saving web pages for keeping records purpose, there aren’t many good options. The first option people always do is to print, whether to a physical printer or to a PDF printer to save the result in PDF format. But the result always varies, depend on how well the webpage is coded for printing.

Some people also use Save As feature to save the entire page as an HTML file. That doesn’t go well either. If you save as simple HTML format, it saves a bunch of unrelated files as well, such as CSS style sheet, javascript file, small image files, etc. Even though you can save either page in one single file format as .mhtml, opening it becomes an issue as well because it always opens in Internet Explorer by default.

The best option is to save the entire page in one single image, like taking a screenshot of the entire desktop. But there is no such thing out of the box for both Chrome and Microsoft Edge, as of now.

However, Microsoft released a preview in its Edge canary channel, now available in the Dev channel as well, that lets you capture the web page with a few simple clicks.

To start capturing, simply right-click and choose Web Capture, or if you prefer a keyboard shortcut, press Ctrl + Shift + S.

Since it supports taking the screenshot while scrolling down the page, you can pick an initial region, and scroll down the page to capture more area than what’s shown on the screen.

Or, you can drag the bottom or top line to enlarge the capture area as well if you already set the initial area.

While it already lets you to take the entire page, Microsoft suggests that they will add the Fullpage capture feature later on to simplify the process.

Note that the capture feature is only available in Edge Canary and Dve channels and not yet ready in the stable version. You will probably need version 88 of Edge to be able to use it.

Bonus tip: if you are a Chrome user, since there is no sight of seeing a similar feature coming to Chrome, you may check out GoFullPage extension to get the feature. It works great.

The post Microsoft Edge has A Web Capture Feature Now that Screenshots the Full Page appeared first on Next of Windows.