Microsoft is testing a new feature in the Microsoft Edge web browser, that is bringing a browser VPN free of charge to all users who are signed-in with a Microsoft Account.

Microsoft is not the first company that is introducing VPN capabilities in its browser. Opera launched its VPN in 2016 and has been operating it since. Mozilla has not integrated its VPN into Firefox natively, but it is operating a VPN of its own and offering better integration in the Firefox web browser.

Back in 2015, I asked whether VPNs would be the next big thing for browsers, and it appears that it is getting traction. 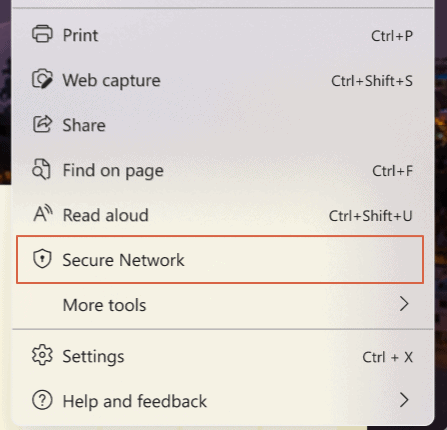 Microsoft Edge Secure Network is a free service in Microsoft Edge that is powered by Cloudflare. Users who sign-in with a Microsoft Account get 1Gb of free data that they may burn through every month.

Launched as a preview feature, Secure Network is not available to most users yet. Those who have it integrated in Edge will see a new Secure Network icon after activating Edge’s main menu.

Users may activate the Shield icon in Edge to control Secure Network in the browser once they have enabled the feature. There they find a toggle to turn the connection on or off, and the used and available quota for the active month.

Microsoft notes that Secure Network turns itself off automatically when the Edge browser is closed. Users need to enable it again in the next browsing session if they want to use its functionality.

The company highlights the following advantages of Secure Network:

As far as privacy is concerned, Microsoft notes that Cloudflare is acting as Microsoft’s data subprocessor to provide the service. Cloudflare collects “a limited amount of diagnostic and support data”, and will delete the data every 25 hours automatically according to Microsoft.

Cloudflare states in its privacy notice that it is logs the “source IP, the destination IP address [..], source port, destination port, timestamp, and access token provided by Edge”, and deletes the data automatically after 25 hours. Request data is never logged and it is not used “for any purpose other than to provide the Proxy service”.

Additional information is available on this Microsoft Support website.

Microsoft Edge Secure Network is a browser proxy that is being tested by Microsoft currently. It gives Edge users with a signed-in Microsoft Account 1GB of free proxy traffic per month, provided by Cloudflare. There is no option to add more data to the account, and it is unclear if such an option will be introduced if the feature is made available to all Edge users.

Some may find the requirement to sign-in with a Microsoft Account problematic, others may object to the selection of Cloudflare as Microsoft’s partner.