Microsoft has made some improvements to the sleeping tabs features in its Edge browser, saving even more of your PC’s resources. With version 100 of Microsoft Edge, more of your tabs can be put to sleep, plus you can now visualize the resources you’re saving by using them.

Microsoft says this results in up to 8% more tabs being put to sleep, and each sleeping tab can save up to 99% of its CPU resources and 85% of memory, which can help speed up other tasks on your PC. Many modern browsers can use a lot of system resources, especially if you tend to have a lot of tabs open, so this is a feature we’d actually like to see in more browsers.

If you want to get an idea of just how much performance you’re getting back by using sleeping tabs, Microsoft has also added a dashboard that also shows you exactly that. If you open the three-dot menu in the upper-right corner and then choose Performance, you can see what resources are being used and saved based on your currently open tabs. 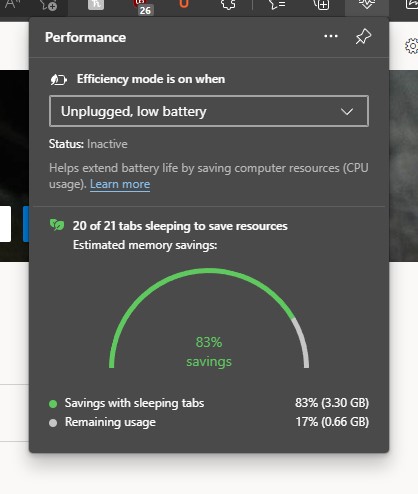 Oddly enough, this addition wasn’t mentioned in the release notes for Microsoft Edge 100, even though Microsoft says it’s rolled out the feature as part of that update. Edge version 100 also added support for opening digitally-signed PDF files, as well as the ability to open a more lightweight, read-only PDF viewer if they just want to read a document. There were also some new security improvements and the usual policy additions for IT admins.