Microsoft has announced a new feature for Office users on Mac to allow them to manage first– and third–party accounts and services in Word, Excel, PowerPoint, and OneNote. As Microsoft described in its official blog post, this is essentially the Mac version of the existing Add Storage accounts capability in Office mobile apps.

A redesign of the previous “Add a Place” experience in the Open tab, the new storage capability allows you to add a SharePoint site, a OneDrive or OneDrive for Business account, or even a third-party account like Box to Word, Excel, PowerPoint, and OneNote. Microsoft has also said that it would add new support for more third-party services to enhance the experience in the future. 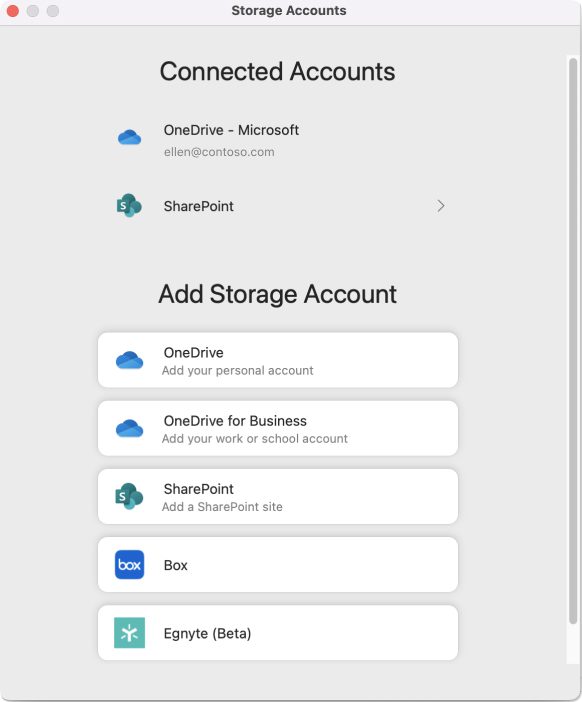 It is easy to manage your accounts in Office for Mac. You can open Word, Excel, PowerPoint, or OneNote on your Mac, and then navigate to the Open tab at the bottom of the side bar. Lastly, you need to click the Manage Storage Accounts button in the lower-left corner to launch the storage accounts experience. However, you should not be surprised if it does not work properly, as Microsoft is currently testing it with Office Insiders.

According to the official Microsoft blog post, the new storage management function for Mac is available only for Office Insiders running Current Channel (Preview) Version 16.64 (22082100) or later. As a reminder, every Office feature Microsoft tests with Insiders does not necessarily become available for the general public in the future. Also, it’s perfectly normal if you do not see the new storage management feature in Office since Microsoft is slowly rolling it out to larger numbers of Insiders.

Are you an Office Insider on Mac? If you have used the feature already, you can share your experience with it in the comments section.