Microsoft Research, working alongside Alibaba Group and Carnegie Mellon University, has published a paper proposing a Fully Transparent Incentive System for Anti-Piracy Campaigns. The system is known as Argus, and is based upon Ethereum blockchain technology. A full paper is available via the link shared above.

Explaining reasons for the creation of Argus, the researchers highlight the value of intellectual property in the modern world, and see a weakness in current incentives to report infringers. With the legal system as it is, the IP owners want as many good faith reports as possible pointing the finger at the source of the copyright infringement. IP owners incentivise reports by offering bounties, without encouraging duplicate or false reports from people creating multiple identities. The researchers reckon that the Ethereum blockchain is the best way to carry out this operation, being “transparent, practical, and secure, while limiting abusive reports and errors”. In other words, Argus takes the piracy bounties program as offered currently by the likes of the BSA, and makes it more efficient and water-tight. 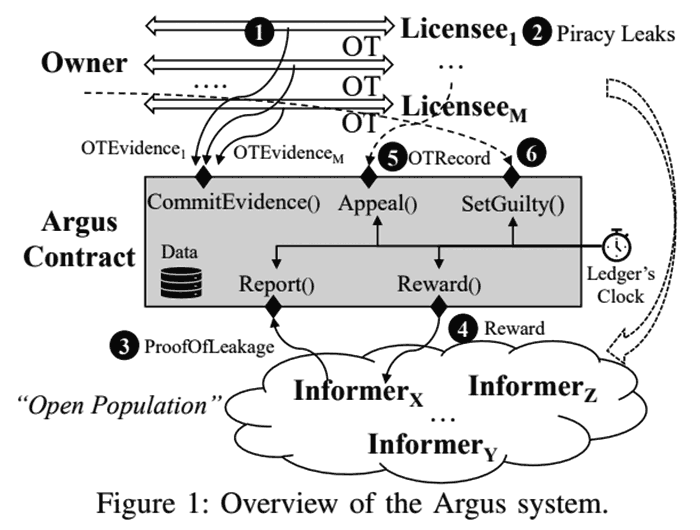 Above, you can see a flow chart of how the Argus system is proposed to work. At the start of the chain, it is important that a unique watermark and/or secret code allows for tracing back to content sources. When a pirated copy is reported by the newly incentivised population, the source becomes the ‘accused’. The source can appeal, but if that fails, it becomes ‘guilty’.

Importantly, Argus is said to be an open system with multiple safeguards built-in to prevent abuse (e.g. multiple claims or false accusations). Moreover, the researchers assert that the Ethereum blockchain use is minimised – a piracy report will take about 14 ETH-transfer transactions.

Whether the Argus system is going to be used to protect digital video, music, software or other IP in the wild remains to be seen. A possible weak point in the process is in the assumption that the watermarking technology used is tamper-free, “which isn’t always the case today,” notes TorrentFreak.

More info about the Argus anti-piracy solution will be presented at the 40th International Symposium on Reliable Distributed Systems in September. Perhaps at that time we will hear of some proposed real-world uses of Argus by Microsoft and/or partners.