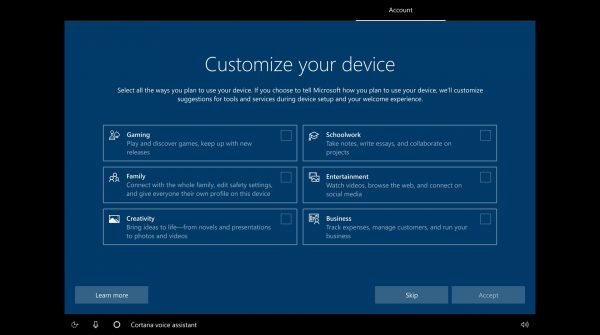 The latest Windows 10 build for Insiders in the Dev Channel introduces a couple of new features.

First up in Build 20231 is a new page in the Windows out-of-box experience (OOBE) setup which asks users what they will primarily be using Windows 10 for (Gaming, Schoolwork, Family, Entertainment, Creativity, or Business) to help ensure the OS gets set up correctly.

This is one of those features that’s only rolling out to a subset of Insiders at this point, and if you’re one of those selected, you’ll only see it if you choose to reset your PC or perform a clean install.

Elsewhere in this build, enterprise customers will now be able to modify file associations on a per-user or per-device basis. Again only a subset of Insiders will see it.

Other changes and Improvements include:

Fixes in this build include: