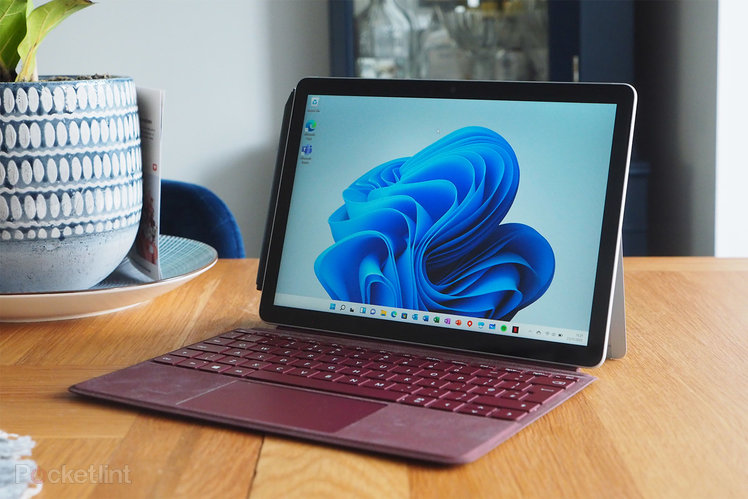 When Microsoft announced the Go 3 there was a bit of a “huh?” moment – because the third-generation tablet-meets-laptop is, more or less, a carbon copy of its Go 2 predecessor. Except it’s a touch cheaper, offers an Intel Core i3 option (not cheaper though!), and houses Windows 11 out of the box.

Which, given that the Go 3 was announced alongside some seriously impressive kit – the Surface Laptop Studio being the particular standout product – somehow makes it seem all the less impressive. Indeed, did it even really need to be released?

We’ve been using the Go 3 for a week and, while it’s still a perfectly portable Windows machine, it feels like it’s behind the times in too many areas to really win the hearts of many. Go figure.

The original Surface Go, released in 2018, was a super-portable machine – and the Go 3 is no different in that regard. It’s designed for emailing, taking notes in a meeting, watching a bit of Netflix on the commute home, that kind of stuff, rather than trying to be an all-powerful Surface product. 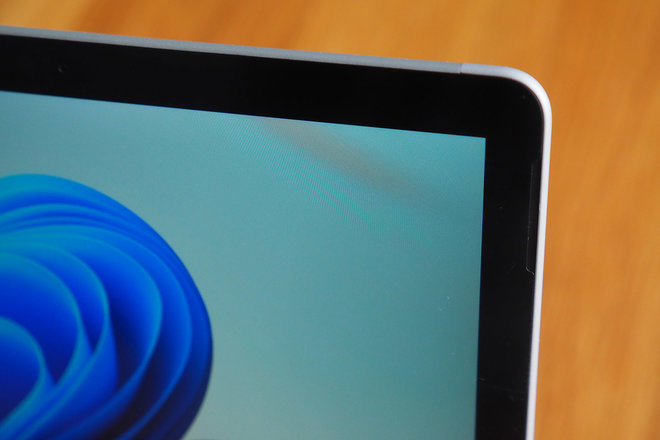 But 2018 seems like rather a long time ago now, as in those three years since the original the Go 3 hasn’t taken the opportunity to upgrade various aspects of its feature set: the ports are all the same, while the screen bezel is the same as the second-gen Go 2 model, meaning it’s pretty chunky by today’s standards.

Visually, the Go 3 has the successful hallmarks of Surface design, though, including compatibility with a Type Cover keyboard and Surface Pen stylus (these remain the same, so if you are replacing an older Go device then you needn’t repurchase a keyboard – unless you just fancy a different colour or design).

How you view the Go 3 will depend on what you want to do with it. Technically it’s a tablet that runs Windows 11 straight out of the box. You could just add the Pen and use it as a sketch pad-like tablet. Or add the keyboard and you’ve got a veritable mid-tier laptop replacement – well, almost.

Whichever of those setup options appeals the most for your needs, one of the Go 3’s best features – and the one that makes it rather versatile in its ways – is the integrated kickstand. It’s a really well designed stand that holds firm and is almost endlessly adjustable from near-upright to almost-flat by design.

Tucked behind the stand is a microSD card slot, too, so you can easily expand upon the (rather limited) on-board storage – we’d avoid the entry-level as it’s a slow 64GB storage; the 128GB SSD is much better, as it’s faster, but it’s also much pricier as a result.

Much as we’re a fan of the Surface kickstand, however, we’ve found the Surface Go 3 a bit taxing to use with its Type Cover keyboard attached. As we’ve finally been travelling again, we’ve been attempting to use the Go 3 on trains and airplanes and, well, there’s just not really enough space to use it. It’s not great to use on a lap either, as the keyboard flaps about and flexes a bit too much. Which, for us, would see us buying a dedicated laptop instead.

That said, there’s very little out there in the Windows space that’s as lightweight as the Go. The total weight – the main unit is 544g, the Type Cover is 245g, the Pen a mere 20g – is well under a kilo all in. Few out-and-out laptops can compete with that.

Part of the lightweight factor comes down to the simple fact that the Go 3 isn’t all that big. It’s the smallest Surface device in the portfolio, as it’s screen is a mere 10.5-inches on the diagonal. It’s a PixelSense display, though, called as such for its 1920 x 1280 resolution – which is better than many in this class. It’s just that those bezels are a bit chunky and doesn’t look as contemporary as we feel it could. It’s also overly keen on dimming auto-brightness to really dull levels, when that’s not always needed. 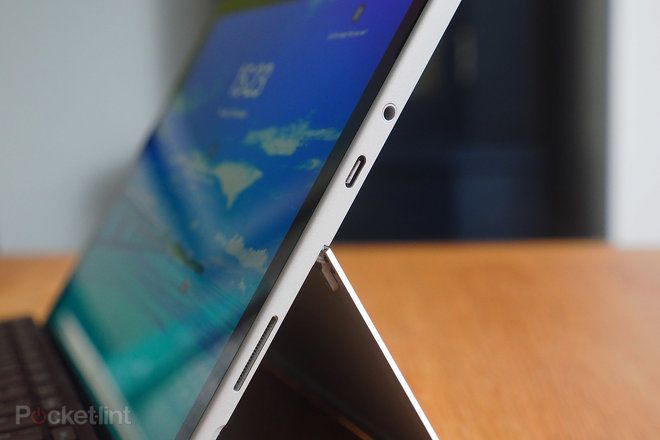 In terms of ports we’d really hoped for some progress in this department. Alas, it’s not to be. There’s a headphone jack (handy if you’re still using wired headphones), a single USB-C port (no USB-A), and Microsoft has stuck with its proprietary Surface connector for charging (we’d much rather have a secondary USB to cater for this for simplicity’s sake).

The third-gen Surface Go comes in a number of configurations: the entry offers the Intel Pentium Gold 6500Y processor and 4GB RAM; there’s a step-up model which doubles the RAM to 8GB and storage to 128GB; thereafter it’s a step-up to an Intel Core i3 processor – which is available as Wi-Fi only (the LTE mobile option seems to be dropped – it’s not on the Microsoft official site in the UK anyway). 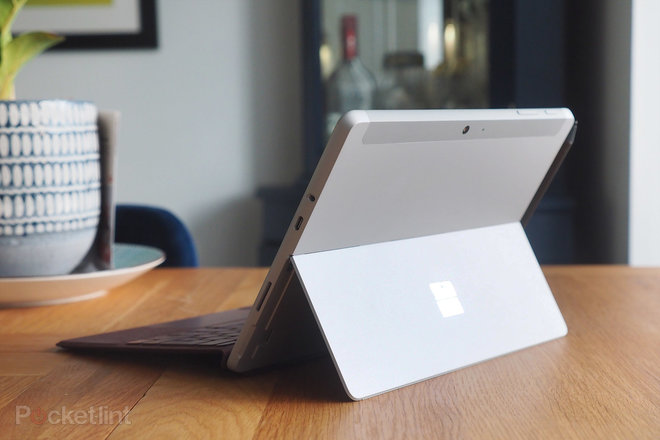 You’ll need to keep a close eye on what you choose in terms of costs. The entry model costs £369/$399/€439, which makes it a relative bargain. The Core i3 model we have on review is £569/$629/€679. Fair enough – but if you were to add the Type Cover and Pen then that price creeps up rather quickly, making the apparent price seem a little less of a steal and more in line with laptop alternatives.

Whichever model you choose, this isn’t a super-powered device by any means. The processor inside for two out of three models is clue enough of that: Pentium Gold slots in-between the super-basic Celeron line-up and the Core i series.

It’s been generally fine for us in everyday use though. But it isn’t super snappy in terms of startup and we’ve had some delays when loading various apps. This sense of ‘pending’ doesn’t make the Go 3 feel as though it earns its stripes in the Surface family really. 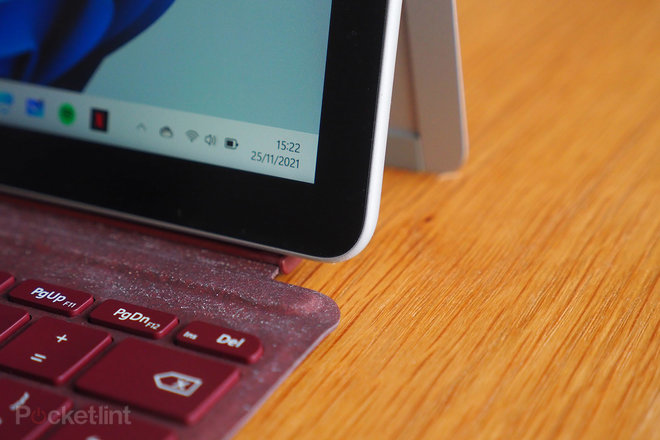 One complaint of the original Surface Go was its lacklustre battery life. We had hoped that the Go 3 would improve in this area – especially with the updated hardware running things – but, no, it’s actually gotten worse. Video tests struggled to reach five hours out of a single charge. So the seven hours of the Go 2 predecessor can’t be quite met here. It’s rather short in terms of life.

Perhaps part of that battery life comes down to the software on hand. The previous Go 2 had Windows 10 S installed, the ‘walled’ version of Windows where you couldn’t install executable files outside of the Windows Store. Thankfully Windows 11 on the Go 3 does away with such restrictions; you can download an executable of, say, Photoshop and run that – although you shouldn’t, as it just won’t run well on this machine. 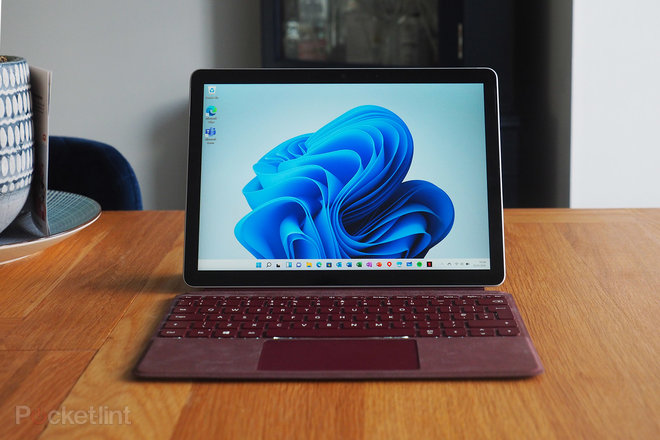 There’s some pretty good stuff in Windows 11, with a simple redesigned layout, easy access to widgets and communications apps, and there will even be Android apps coming later – but this last aspect isn’t yet realised at the time of writing.

Still, Windows 11 isn’t really enough to save the Go 3 from its lacklustre performance and battery life issues. It’s nice to see the new operating system running in full here, but you’ll likely find other implementations on higher-end devices that give it far more worth.