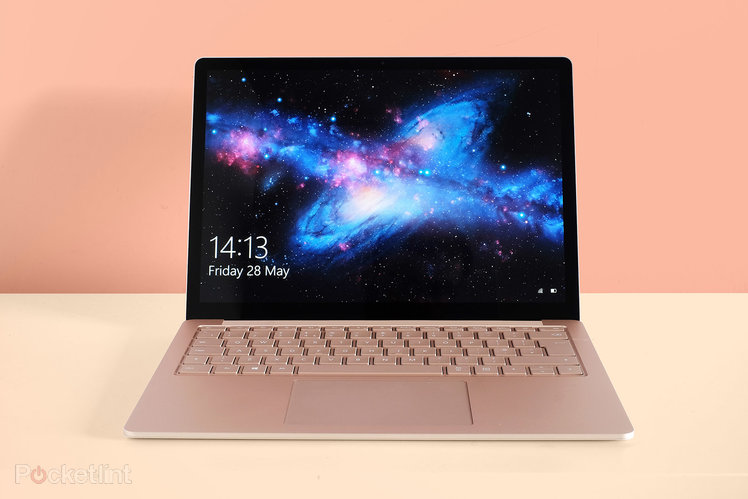 The Microsoft Surface Laptop 4 might just be the best Windows 10 laptop there is. Our job is to explain why, because the reasons aren’t going to be apparent from just looking that the thing, and eyeing-up what it offers on paper.

The keyboard, the touchpad, the hinge design, the speakers, and its general look and feel are all brilliant. Manufacturers often say their products are designed with how they are actually used in mind. But here that kind of claim seems almost 100 per cent in lock-step with the results. We say “almost” because there’s some minor shortcomings that fly in the face of perfection, but is that enough to put you off?

The Microsoft Surface Laptop 4 is quite similar to an Apple MacBook Pro, but more like one of the models from 2015 before Apple went and ruined its keyboards and started mucking about with OLED Touch Bars. 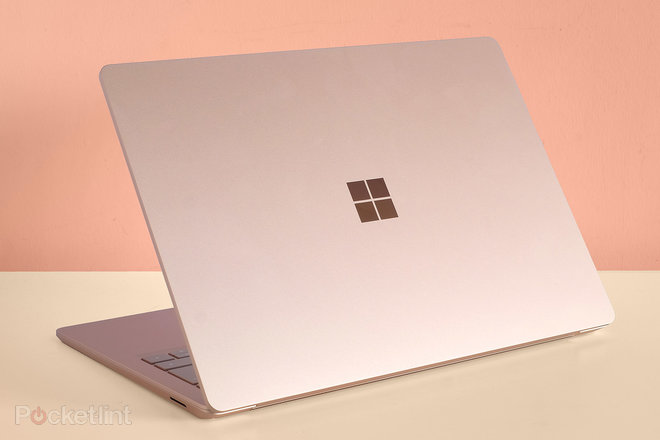 This Surface design is extremely simple and ‘pure’ looking. And Microsoft hasn’t used any weight-saving tricks that might compromise the feel of the product.

The entire shell is aluminium. Lighter magnesium alloys are very popular these days, but they simply don’t feel as good as the Surface Laptop 4’s exterior. It has a fantastic anodised finish, which you can get in a light blue, silver or black – as well as the light gold (as pictured here).

Some shades have keyboard surrounds made of Alcantara, a kind of hard-wearing synthetic felt that you’ll typically find in high-end car door surrounds. So tan keys on sandstone gold? This probably isn’t the finish we’d pick out of the four, but the combination of minimalist design and acres of aluminium is a winner.

There’s one part Microsoft needs to improve next time, and arguably should have done already: the somewhat thick screen borders date the appearance of the display part. Microsoft often shines when it’s being boring, but it also means you sometimes want to give its designers a kick up the backside. 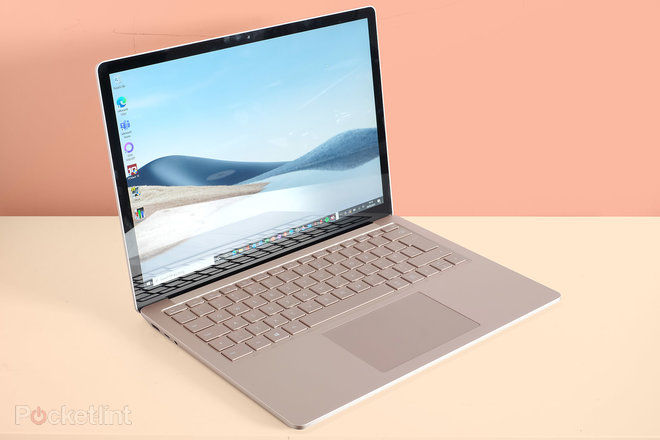 The Microsoft Surface Laptop 4’s hinge is excellent. It’s smooth, firm when set in place, and like the fanciest designs, can be lifted with a single finger from closed. However, it doesn’t tilt back that far. This is absolutely not a hybrid laptop. But then you probably don’t need a hybrid laptop anyway.

However, the Microsoft Surface Laptop 4 does have a touchscreen. And after a few years of wondering that the point of touch is in a Windows laptop, do we often find ourselves reaching for the display when flicking through websites. Who would have thought it? 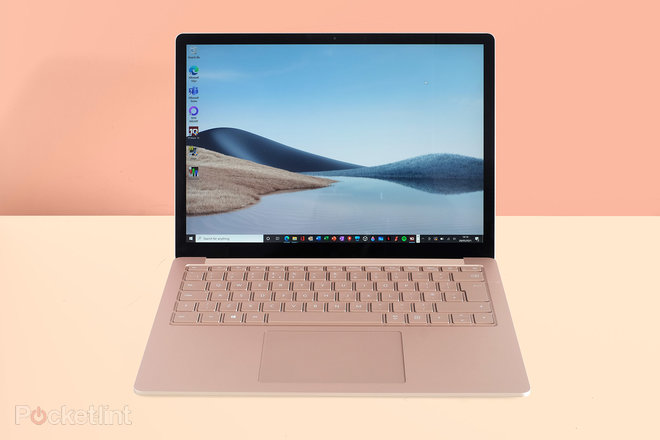 If you’ve already done a bunch of research on the Surface Laptop 4 you may have seen its screen described in various shades of “beautiful”. This is true in some senses, and it’s a particularly great display given the asking price of the entry-level laptop, but it’s not a complete masterclass in screen tech.

For example, this is not a wide gamut display. You’re not going to see the sort of ultra-deep saturation on offer in OLED laptops. It has very good “normal” colour, but doesn’t have the chops to bring out eye-popping tones.

We’re fine with that, but we do think contrast could be a little better. Blacks do look slightly lifted in a dimly-lit room if the brightness is high enough. We’ve reviewed laptops cheaper than this one in the last six months or so with up to 30 per cent higher contrast.

The Microsoft Surface Laptop 4 screen isn’t for design pros and enthusiasts who wang on about “delta E” and “Adobe RGB”. But it does still look great. 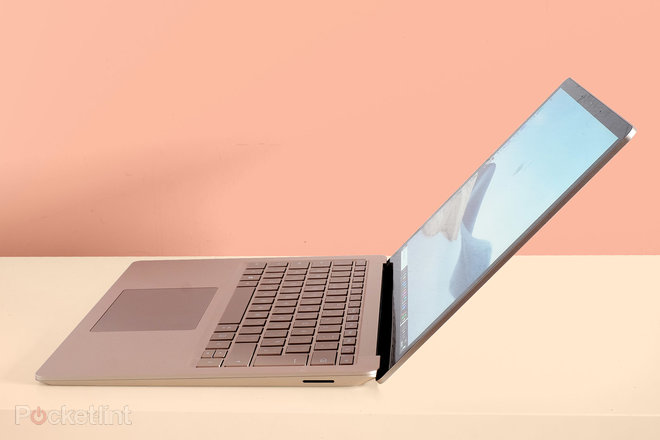 Its 2496 x 1664 resolution looks far sharper than the 1080p panels you’re likely to get from rivals at the lower end of the Surface Laptop 4’s price range. Maximum brightness is very good too. We spent a few hours working outdoors with it on a (rare) sunny London day. No problem there, although there are reflections as this is a glass display.

The other part to notice is obvious if you look at all closely: the shape. This is a 3:2 aspect screen, the best common shape for maxing out on perceived screen space without increasing a laptop’s width. It’s good for apps, fine for games, but not ideal for video.

Some have suggested the Microsoft Surface Laptop 4’s keyboard is a bit shallow or “mushy”, but we honestly don’t know where they get that from. We think it’s a pleasure to type on. It has a fast feel, but the mellow yet well-defined key actuation provides good feedback and feels great for long-form typing. 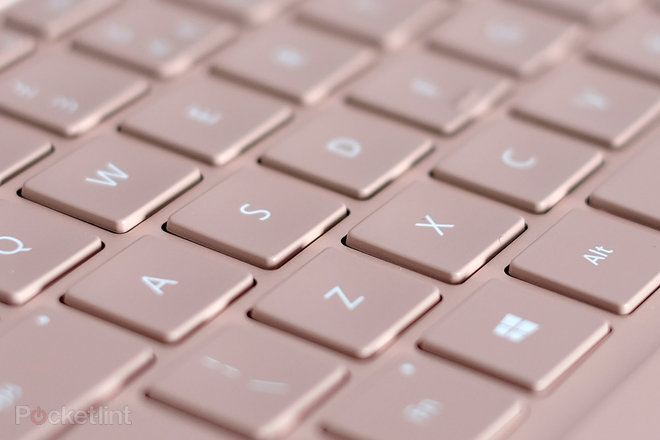 We’d still take slightly deeper action if it were offered. The keys are 1.3mm deep, slightly less than the classic 1.4mm laptop standard. The Laptop 4’s keyboard isn’t at the same level as the classic Lenovo ThinkPad design, but it’s a very good middle ground between tall depth and the trendy thin-and-clicky style.

You get a three-level backlight too, which is handy for night typing.

So the Microsoft Surface Laptop 4 keyboard gets a B+, minimum, from our score sheet. But the touchpad might just be the best you can get in any Windows laptop. It feels like velvet and depresses with a quiet ‘clonk’ that just makes just about every other touchpad designer (apart from Apple’s) seem amateurish. 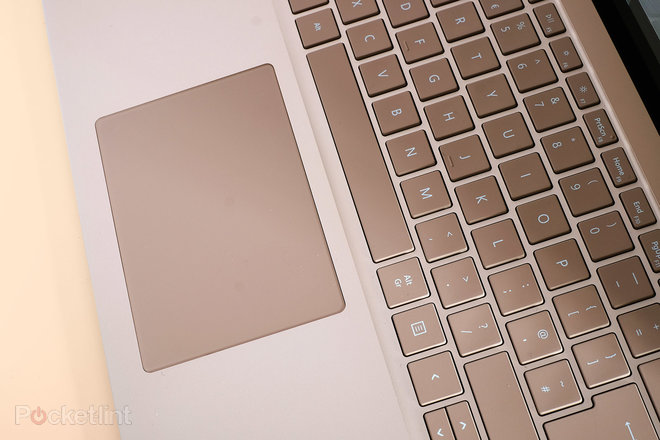 It may sound strange to get excited about a touchpad. Surely gaming performance and 5G (which the Surface Laptop 4 doesn’t have) deserve more attention? Not in our book. Microsoft pays loads of attention to the bits you’ll notice each and every time you use the laptop – and this stuff matters.

The big news for the 2021 Surface Laptop 4 is that you can get it with either an AMD Ryzen 5, an Intel Core i5 or Intel Core i7 processor. AMD Ryzen support is limited, though. At the time of writing you can only get a Ryzen in the entry-level £999 model with 8GB RAM and a 256GB SSD.

We think this is the version a lot of you should buy though. Ryzen processors are fantastic, their battery life is better than the Intel versions, and performance should be more than sufficient unless you need a laptop with at least 16GB RAM. 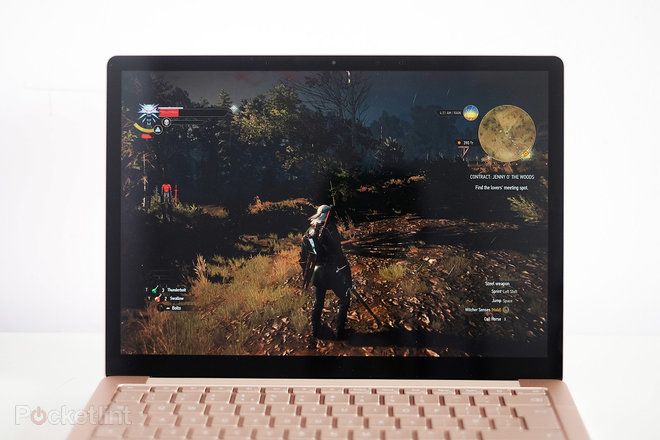 Our review Surface Laptop 4 is the step-up model. It has an 11th Gen Intel Core i5, 8GB RAM and a more capacious 512GB SSD. You pay an extra 25 per cent or more though. Is it worth it? Not unless you really need that extra storage.

Microsoft arguably charges far too much for upgrades to RAM and SSD storage. However, there’s a nice real-world benefit to jumping to Intel this year because we get Intel Xe graphics. This is pretty much Intel’s first genuinely decent integrated graphics ‘card’. We tried out The Witcher 3 on it – sure, it’s an old game, but it’s still a looker, and one that would be more-or-less a no-go with older integrated graphics chipsets. You can play it at a reasonably solid 30fps using a resolution a little below native, at 1400 x 1050 pixels.

The Microsoft Surface Laptop 4 is also very quiet under pressure. It does have a fan system, but it never makes much noise.

We also like that there are no heat outlets to block if you use the Microsoft Surface Laptop 4 on your knees or with its base sat on a carpet. Air is pulled in and pushed out of grilles just in front of the bottom of the screen, and on the back.

The Microsoft Surface Laptop 4 would need to generate a helluva lot more noise that it does to try to take on this laptop’s speakers too. As in the Surface Laptop 3, the sound comes up through the keyboard rather than using specific speaker outlets on the sides. This provides a much clearer central channel than you usually hear in a laptop. 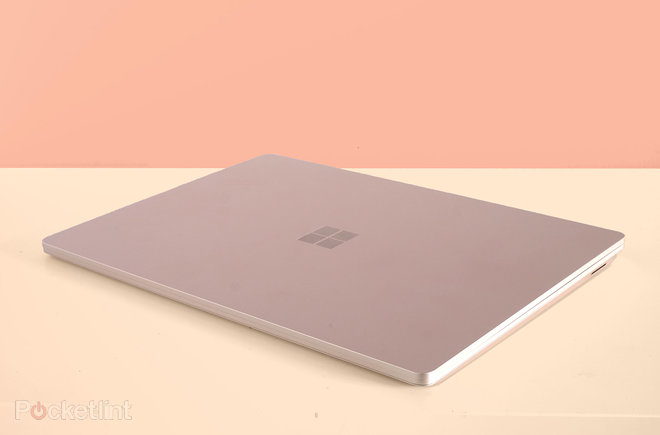 We initially thought the sound might be too anchored to the centre, but the Surface Laptop 4 also does a good job of separating out left and right panned audio. This speaker array sounds loud, beefy and confident, and it really helps to cement this Surface as a laptop you might use for everything from doing your tax returns to composing music to watching YouTube.

That said, the screen shape, at 3:2 aspect, is clearly not ideal for most forms of video. It leaves big black bars on top and bottom unless you want to crop off the sides – which is rarely a good idea.

The Microsoft Surface Laptop 4 has a 47.4Wh battery. That is a pretty uninspiring figure for a laptop that’s not hugely thin. Microsoft’s longevity claims are lofty ones too. It says Intel versions like this one can last up to 17 hours between charges. 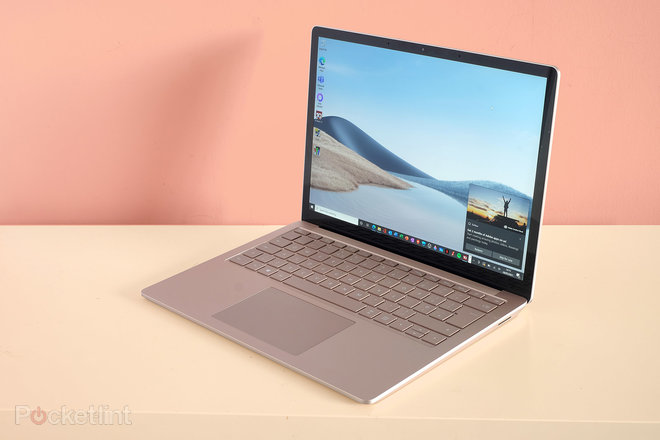 Our results were not close to that, but were still better than some of the Intel-powered laptops we’ve reviewed at around this price, and better than the Surface Laptop 3. It lasted for 10 hours 42 minutes during mixed productivity work – nothing too taxing, but not too far off the stuff many of us do day-to-day. This was at 65 per cent brightness, which is the sort of level you might use indoors.

When we also kept an eye on the Surface Laptop 4’s battery level when we worked with it outside, pushing screen brightness to the max to compete with a lot of ambient light. An hour of use, mainly just typing away in WordPad, took 16 per cent off the battery – suggesting both that it will last around six hours and 15 minutes off the charge, and that the screen is a bit of a battery hog at max brightness.

You can get longer-lasting Windows laptops, particularly if you buy a 1080p resolution one with an AMD Ryzen processor. But we’re pretty happy with the Surface’s stamina given how sharp the screen is. More pixels usually mean more power drain. The benefit of a further jump to 4K in a rival is arguably outweighed by the dip in battery life we usually see, even with laptops from this generation. 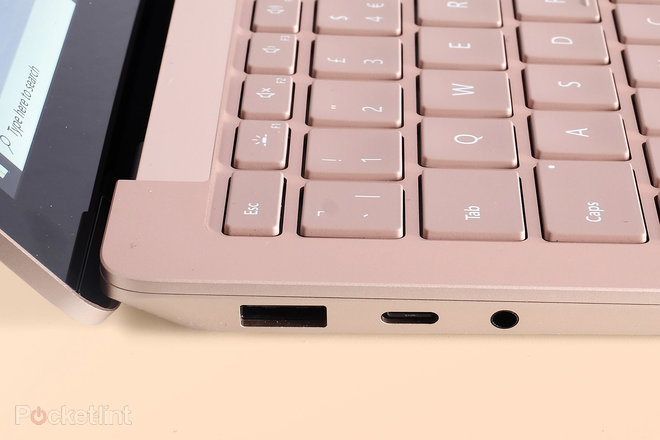 Microsoft has kept the Surface Laptop 4’s connections minimal too. You get three “normal” ones: an old-style USB (USB-A), a USB-C, and a headphone jack. The USB-C is nothing special – it doesn’t have the Thunderbolt connector support that offers ridiculous bandwidth for plugging-in stacks of monitors or ultra-fast external SSDs. It’s a USB 3.2 socket, limiting bandwidth to 10Gbps, or 1250MB/s. Still it’s not bad.

The charge input on the other side uses Microsoft’s clever magnetic connector, which is a lot like Apple’s old MagSafe style. Trip over the cable and it will fall out rather than pulling the Surface Laptop 4 off a table. This doubles as a dock connector, nudging you towards buying Microsoft’s Surface Dock if you want to plug in monitors. And we don’t really want to do that given the cost. However, for connecting a single monitor you can use a USB-C to HDMI adapter, which is problem solved.