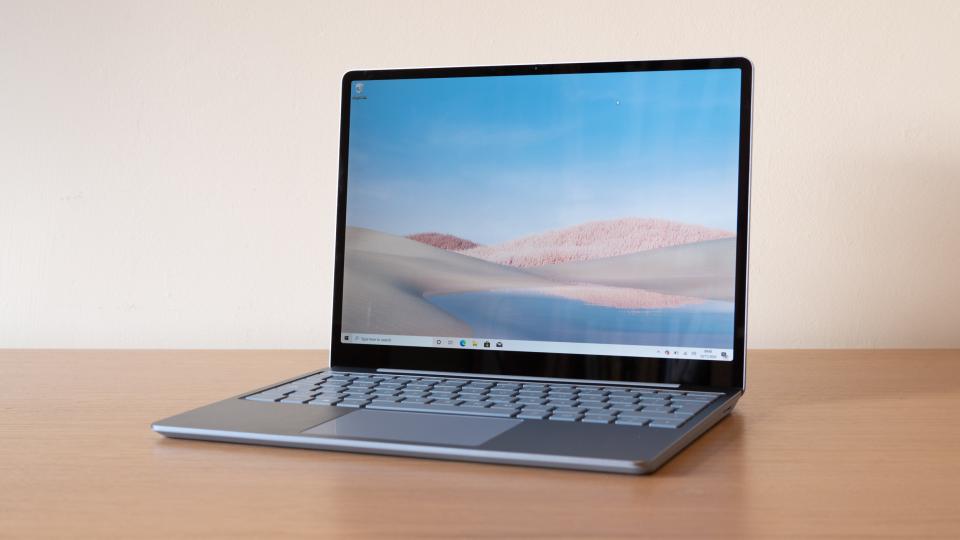 Not so long ago, I’d say if you spent £500 or so on a laptop, you’d get what you paid for: a workable machine but one that was slow and lumpen in design. In 2020 that’s beginning to change and the Microsoft Surface Laptop Go is one of a new wave of practical, attractive laptops you don’t have to spend over £1,000 to own.

With temptingly low prices and a design not too far off the premium Surface Laptop 3, the Go is a laptop that sets the standards by which all future mid-range ultraportables are set to be judged. If you have around £700 to spend on a new laptop, you’d be foolish not to add it to your shortlist.

Microsoft Surface Laptop Go review: What you need to know

With the Surface Laptop Go, Microsoft has taken the manufacturing expertise it has developed over the years from building its Surface series of devices and introduced it to a lower price point.

It has an excellent 12.4in 3:2 aspect ratio PixelSense touchscreen (the same size and shape as the display on the Surface Pro 7) and a slim, well-built body that wouldn’t be out of place in a laptop priced at £1,000 more.

Normally at this price, in order to get such a nicely-made machine you have to sacrifice something in the core specification and that is certainly the case with the cheapest version of the Surface Laptop Go since it only has 64GB of eMMC storage and 4GB of RAM. However, step up the range and the price stays reasonable and the sacrifices less extreme.

Prices for the Surface Laptop Go start at a mighty reasonable £549 but, with so little storage and RAM, you should view the most basic model as more of a cloud computing device – something more closely resembling a Chromebook than a Windows laptop. Once Windows has taken its chunk, you’ll have very little space for applications and file storage.

Our current favourite in this price bracket is the £549 Honor MagicBook 14, a superb-value Windows 10 laptop that has a more prosaic all-round build but faster performance pound-for-pound, a 256GB SSD storage as standard and 8GB of RAM. Microsoft’s own Surface Go 2 is slightly cheaper than the Laptop Go too (from £499 with the Type Cover keyboard) but it’s smaller than the Surface Laptop Go and not as powerful. 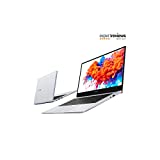 There’s always the Microsoft Surface Laptop 3, which comes with a larger 13.5in display and similar build quality but the £999 base model only comes with a starter 128GB of storage – half the amount that comes with the £899 Laptop Go.

It may also be worth considering a non-Windows machine if you’re not keen on these alternatives. The Google Pixelbook Go is a lovely laptop and has amazing battery life but it comes with a similarly underfed specification (Intel Core m3, 64GB of storage, 8GB of RAM) and starts at £80 more than the Surface Laptop Go. 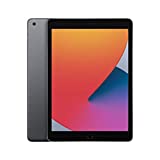 The regular Apple iPad 10.2in (2020), equipped with the Smart Keyboard Folio, makes a decent laptop replacement, too, with prices starting at £488 for the 32GB model or £588 for the 128GB iPad (both prices include the keyboard). The display is smaller at 10.2in, however, and connectivity is more limited.

The only difference is that, instead of more aluminium, the base of the laptop is finished with a soft-touch plastic, pigmented to match the colour of the keyboard.

Overall it’s smart, neat and feels sturdy enough to take the knocks of everyday abuse. It’s light and slim, too. If portability is key, it’s a very good choice: weighing 1.1kg and measuring 278 x 206 x 15.7mm when closed, you can sling it in your laptop bag and you’ll barely notice it’s there. 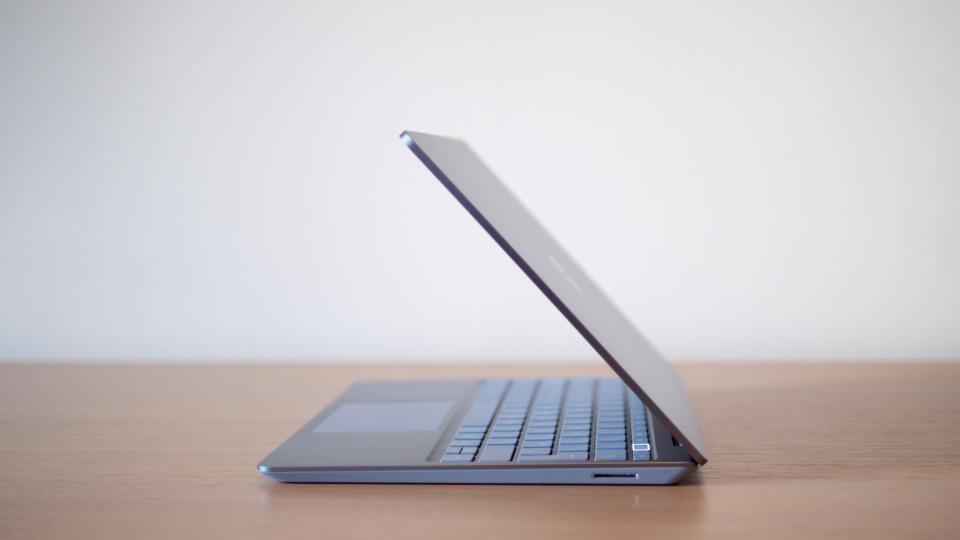 And, yet, despite the tiny size, the 12.4in display feels comfortably large enough to work on all day. That’s mainly down to its 3:2 aspect ratio, which lends the display a more spacious feel than 16:9 displays with the same diagonal measurements. Indeed, the Surface Go’s screen, although nominally smaller, is actually the same height as the Honor MagicBook 14’s 14in display.

The keyboard is a delight to type on and while I’d prefer the keys to have slightly dished surfaces instead of the dead flat ones here, there’s enough travel and feedback for frustration-free touch typing and there aren’t any major issues with the layout.

There’s a fingerprint reader embedded in the power button at the top right, just to the left of the Del key, which works well. Oddly, Microsoft omits this from the cheapest model. You also get a Windows Hello-compatible 720p webcam set into the bezel above the screen. It’s not a bad webcam but it isn’t the best I’ve used, either, and not a patch on the one you get on the Surface Go tablet. 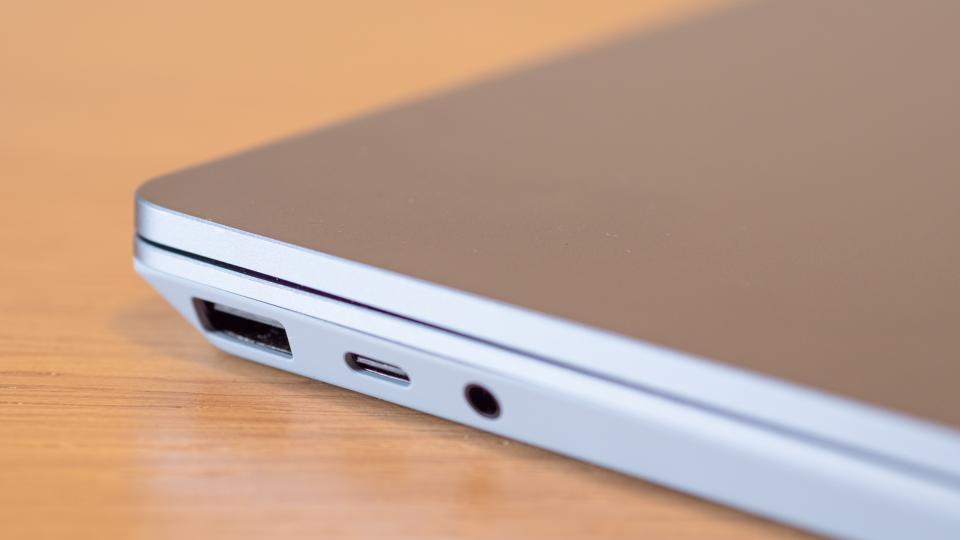 The touchpad works without issue, though, and around the edges of the laptop is a sensible selection of ports. On the left edge is a full-sized Type A USB port, a USB-C 3.2 Gen 2 port (up to 10Gbits/sec) and a 3.5mm headset jack. On the right edge, a magnetic Surface Connect port lets you hook up your charger.

Round it all off with Wi-Fi 6 connectivity, courtesy of Intel’s 160MHz AX201 chipset, and you have a thoroughly modern, well-connected laptop. There’s very little to complain about from a practical standpoint here.

Aside from feeling spacious for its size, the Microsoft Surface Laptop Go’s 12.4in PixelSense touchscreen is, technically, very good. Usually, this is an area where budget laptops cut costs – the Honor MagicBook 14’s screen is drab and uninspiring – but not here.

The resolution is 1,536 x 1,024 (148ppi) and it goes bright enough to be readable in bright conditions. Its presentation of colours is impressive, too. The display covers 91.6% of the sRGB colour gamut (out of a volume of 93.8%) and colour accuracy within sRGB is admirable at an average colour difference Delta E of 1.44. Not only that, but viewing angles are excellent and, with a contrast ratio of 1,038:1, on-screen images have plenty of dynamism. 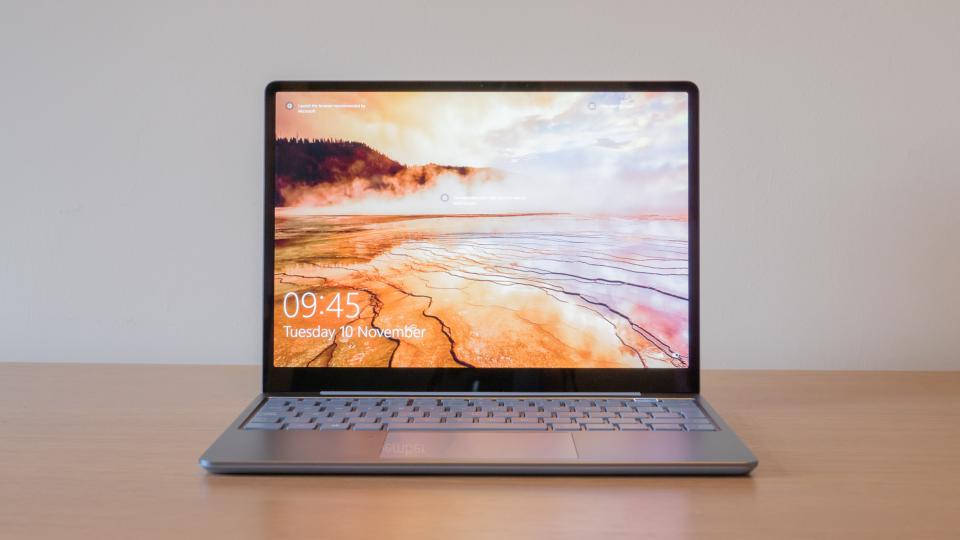 All of these factors go together to produce a display that’s marvellously easy on the eye and a significant margin superior to the Honor MagicBook 14. For reference, the Honor’s screen was only able to produce 57% of the sRGB colour gamut and looks dull as a result.

As for audio, that’s not bad, either, with the laptop’s under-keyboard speakers kicking out sound at surprisingly decent volume. They’re a touch on the tinny side, as you’d expect from any laptop speaker but perfectly listenable for podcasts, audiobooks and video calls.

All Surface Laptop Go models use the same Intel 10th-Gen Core i5-1035G1 CPU but you can expect performance to differ significantly between the bottom-end Surface Laptop Go and the two models above it. This is because the budget machine uses a 64GB eMMC drive and has only 4GB of RAM, while the others have faster SSD storage and 8GB of RAM.

Either way, you’re not looking at groundbreaking performance here, even with the speedier configuration tested for this review. While the Surface Laptop Go is quicker and more usable than most sub-£500 Windows laptops, it lags a fair bit behind the Honor MagicBook 14, which uses an AMD Ryzen 5 3500U CPU: 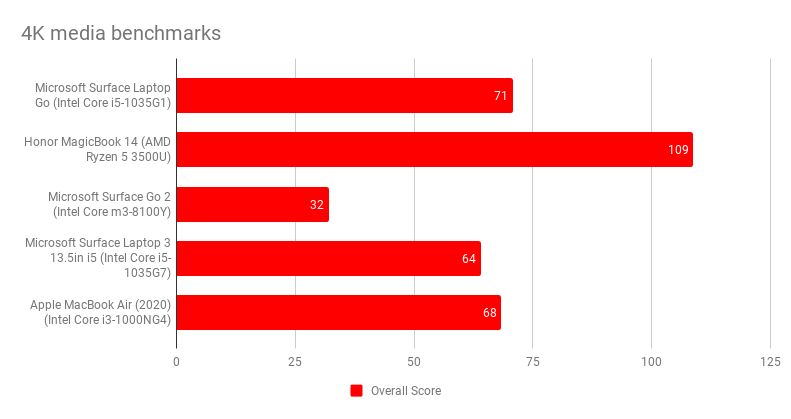 The 256GB SSD inside our review Surface Laptop Go isn’t the fastest thing, either, and again, it’s slower than the SSD in Honor – you definitely don’t want the 64GB eMMC drive in the cheaper model because it’ll be even slower than this. 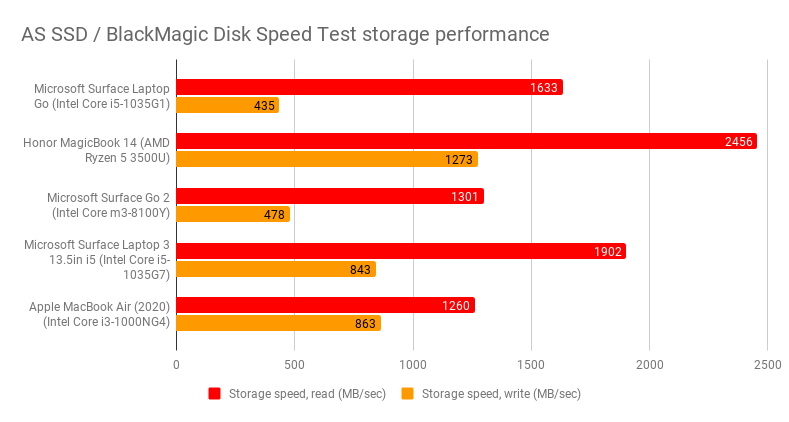 The good news is that all this means the Surface Laptop Go is a responsive, highly usable machine. It won’t stand up to heavy-duty use – high resolution video rendering and gaming are out. But it boots quickly and, for most day-to-day tasks, the level of performance on offer is perfectly decent. Indeed, the Surface Laptop Go isn’t all that much slower than the more expensive Microsoft Surface Laptop 3.

That goes for battery life as well, which is also more than acceptable at this price. It can’t beat the very best on this count – the Google Pixelbook Go is the longest-lasting budget laptop we’ve tested, lasting nearly twice as long in benchmarking. However, at 7hrs 27mins, the Surface Laptop Go’s battery life is only slightly worse than the Honor MagicBook 14 and Surface Laptop 3 and slightly better than the Surface Go 2: 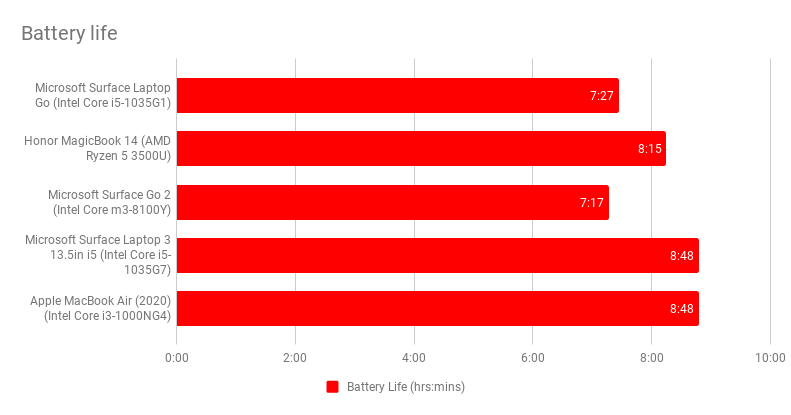 Taken in totality, there are quite a few compromises being made by Microsoft, particularly in the cheapest £549 model. This is a laptop you should only consider if you’re prepared to treat it like a Chromebook – to access cloud-based apps and mainly store files online.

For these reasons, I’d still recommend the Honor MagicBook 14 over and above the Surface Laptop Go for those seeking a top-quality laptop at a bargain price. The MagicBook is a faster, more practical laptop than the £549 Surface Laptop Go and only a little less portable.

There are, however, two sides to this particular debate and the more expensive Surface Laptop Go models make a lot more sense, in particular the top-end £899 configuration.

At this price, the Surface Laptop Go’s all-round quality brings it into contact with laptops such as the Apple MacBook Air, Samsung Galaxy Book Ion and Microsoft’s own Surface Laptop 3 – and it more than holds its own. 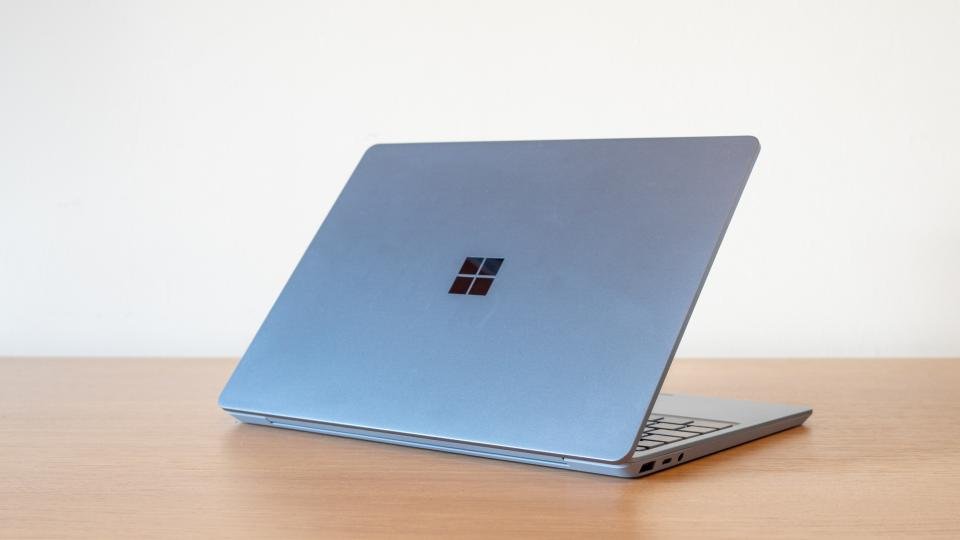