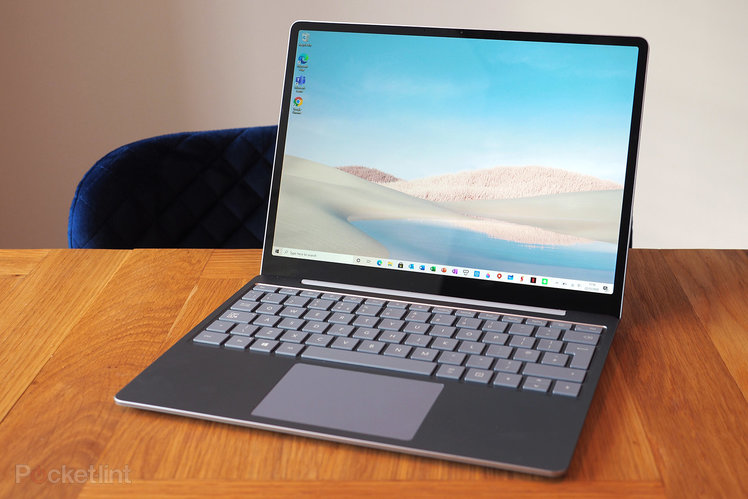 The Microsoft Surface Laptop has, through all three of its release iterations, proven to be our favourite premium Windows laptop time and again – winning the Pocket-lint Awards in its category in both 2019 and 2020.

So when Microsoft decided to bring out a more affordable version, called the Surface Laptop Go, it did make us wonder what would have to give to cut the price without cutting into a premier experience. So here’s how it all stacks up.

Upon pulling the Surface Laptop Go from its box it looks a far cry from its budget status, aping many of the premium design traits that you’ll find in the Surface Laptop proper. The use of cool-to-touch metal on the lid and frame being standout, while the finish options – there’s three, this one in the photos is Ice Blue – look great. 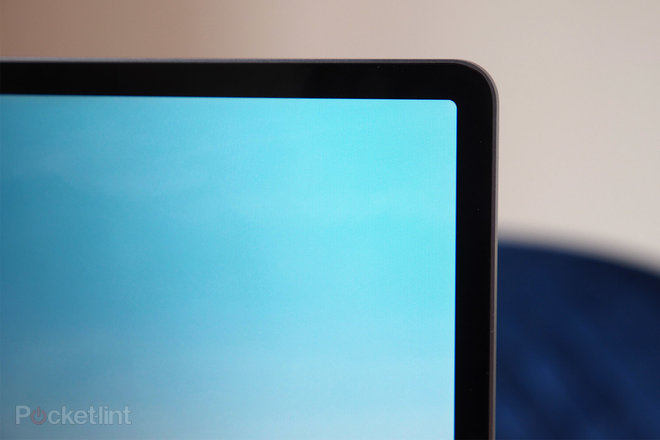 The Go is small and lightweight, yet it’s got a fairly large screen on account of the 3:2 aspect ratio – making the 12.4-inch panel more like an A4 sheet of paper than the more elongated screens that are so typical in laptops.

The screen is plenty bright, too, while its resolution – at 1536 by 1024 – is pretty sharp considering it’s less than Full HD in overall pixel count. That’s not a big problem, it just means you’ll find sharper panels elsewhere in the market. It’s befitting of its budget status, really, which is the whole point of the Go model. 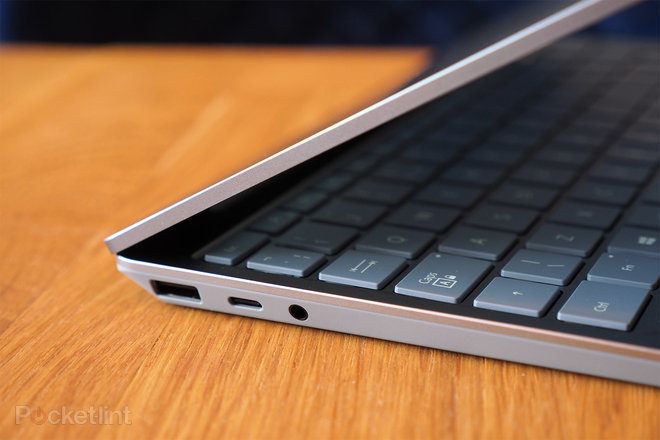 Ports aren’t especially plentiful: there’s a USB-C and a full-size USB-A port, but other than the 3.5mm headphones jack that’s your lot. Thankfully power is handled by Microsoft’s Surface Connect rather than using up the USB-C port, although we would prefer this proprietary format to be dropped in favour of more ports in the design.

When plugged in we found the Go’s first issue though: it’s noisy. The fan kicks in due to the device heating up when recharging, which is delivered in an irksome whistling fashion. It doesn’t even need to be under load for this to happen, you could have no applications open whatsoever and it’ll whistle away. 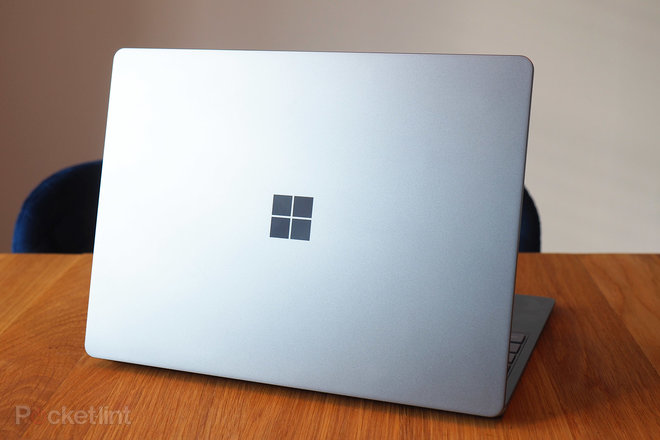 Another major point to mention is the use of Windows 10 S. This version of Windows utilises the Microsoft Store to obtain and download apps – so you’re shielded from EXE file-types and can’t download and install such a variety of apps.

However, to switch out from S to ‘normal’ Windows 10 is easy enough: you can do it for free and we suspect most will do this straight away. We certainly did. That then means the Go has no limitations in what you can obtain and run on it, whether that’s a different browser such as Chrome, or a full-fat app such as Photoshop (albeit running at Intel Core i5 levels).

Although the Go’s keyboard looks fairly squashed into its space, it’s actually a full-size one – and that makes for a decent typing experience. 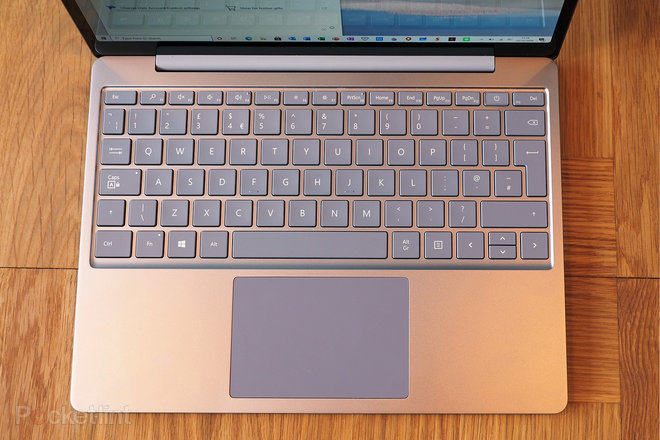 Well, it does when it’s light. Unfortunately the Go’s keyboard lacks a backlight, with only the Caps Lock key having a corner LED for any kind of illumination. It’s pretty rare that a keyboard isn’t backlit these days. But that’s another area where cost-cutting has happened, ultimately, to help keep the Go a little more budget.

The trackpad is a reasonably large scale, too, with a smooth topped finish that’s responsive to touch. It is plastic rather than glass, which gives it a slightly more ‘tacky’ feel to the fingers, but it works well enough. Some competitors are releasing laptops with even larger over-size trackpads, but there’s not much unused space in the Surface Laptop Go’s real-estate anyway, so we think it’s a sound solution as is. 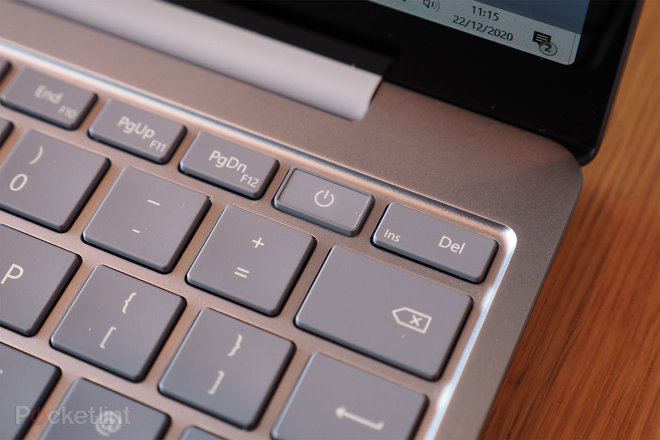 Also of note is the fingerprint scanner embedded in the power button, which makes for super-quick Windows 10 sign-in. *Caveat time though: this feature is absent from the entry-level model, so if you’re looking to the Laptop Go for its appealing price point then note that not all models offer the same by feature set.

As we detailed previously, the Surface Laptop Go ships with Windows 10 S, but you can switch this to Windows 10 instead without incurring a cost. It’s a good job, then, that there’s a proper processor under the hood, capable enough of handling tasks that may typically fall outside of the Windows 10 S remit. Want Photoshop? You got it. 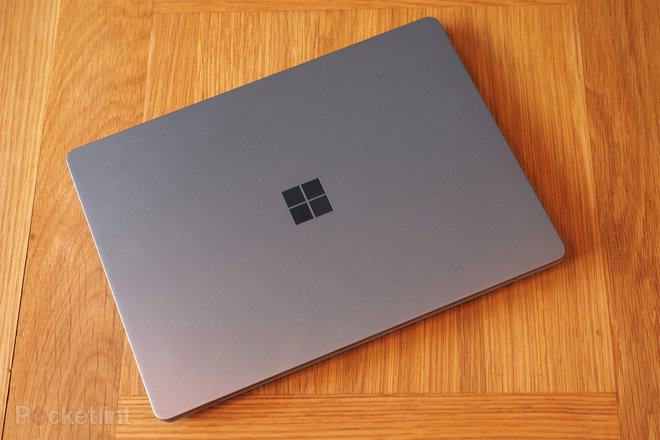 Whichever Surface Laptop Go you pick – and there are three levels – it’s the same processor, an Intel Core i5 (1035G1). It’s the storage and RAM that differ rather dramatically though: the entry-level model has 64GB and 4GB respectively, which is rather limited; the two other models up the RAM to 8GB; while the only other difference from mid- to top-level is 128GB versus 256GB storage.

If you opt for the top-end model, however, the price is significantly higher – by almost 40 per cent over the base model, and closing in on the four-figures mark. That’s rather a lot to pay for doubling the RAM and delivering a usable storage amount. The middle spec model is probably the best balanced of the lot, remaining at an attractive price point with just about enough storage on board. 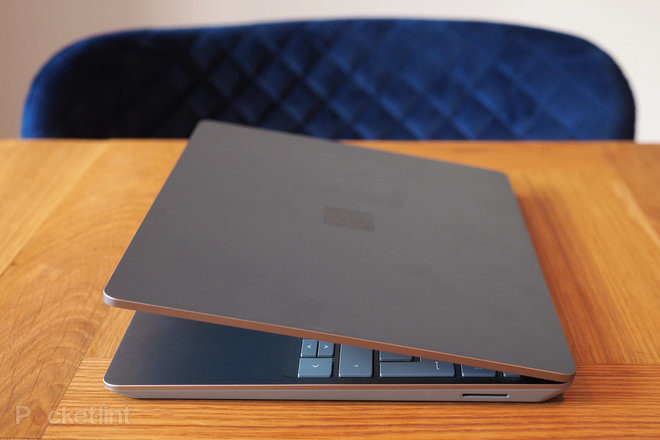 In terms of battery life the Surface Laptop Go quotes an up-to-13-hour life per charge, but that’s over-reaching compared to its real-world figure. We were able to stream a Full HD YouTube video (well, the source was Full HD, the screen downscales that given the resolution available) for just under seven hours before it was game-over time. That’s reasonable enough innings, on par with the Surface Laptop 3, and long enough to cater for a varied day of work/study/mucking about on the internet.