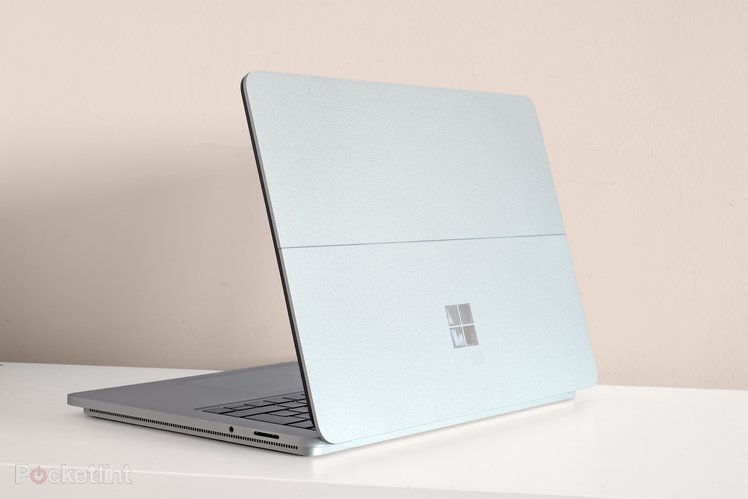 The Surface Laptop Studio sees Microsoft try to cram all the special features of the Studio 2 all-in-one PC into a laptop.

Made in part for creative types, like digital artists and designers who might otherwise use a Wacom graphics tablet or an iPad with Procreate, it also shows off some of Microsoft’s greatest hinge work yet. And while that sounds silly, it means a lot in a hybrid.

The Laptop Studio, at least on paper, then, is a corker of a laptop – one that can give even the Apple MacBook Pro a run for its money.

There’s just a question of whether it offers too much for some of the potential audience and not enough for others.

It costs a fair packet, after all – particularly for the models with dedicated GPUs. And with lesser colour coverage than the latest MacBook Pro models, and a hinge that may not actually lock at the angle you want, you should have a good think before buying.

We’ll help out where we can with the brain work in this review.

No other company seems to have put quite as much effort into getting the hybrid concept right as Microsoft. Its hinge designs are minor works of art, and the Microsoft Surface Laptop Studio features a brand new one.

It can pass as a normal performance laptop, but the display also pivots on a hinge near its centre. This lets you use the Microsoft Surface Laptop Studio in three distinct positions.

There’s the Clark Kent, normal laptop mode. You can flip the screen all the way over so it sits on top of the keyboard, producing the meatiest tablet in town. And the Superman mode sits between. A set of magnets holds the bottom of the screen so it sits just above the touchpad.

It’s all very slick, and, in each position, magnets keep the display in place firmly.

The one question: is that angle the one designers and artists actually want? The classic comfy angle sees the drawing surface raised about 15 degrees above the horizontal.

You can let the screen rest at other angles, including one better for stylus use. However, it’s then left to rely exclusively on the keyboard base for stability, and wobbles a bit under anything greater than light pressure.

For the best ergonomics with stylus use, you’d probably want to arrange the Laptop Studio with its screen flat over the keyboard and sit it on some form of sloped stand.

There’s good news. The Laptop Studio uses an unorthodox cooling system that takes all different kinds of use into account. Its hinge area and underside have nothing to do with the airflow. Instead, there are air grilles along each side, half-hidden in an indent. Blocking them accidentally just isn’t going to happen unless you do something strange. 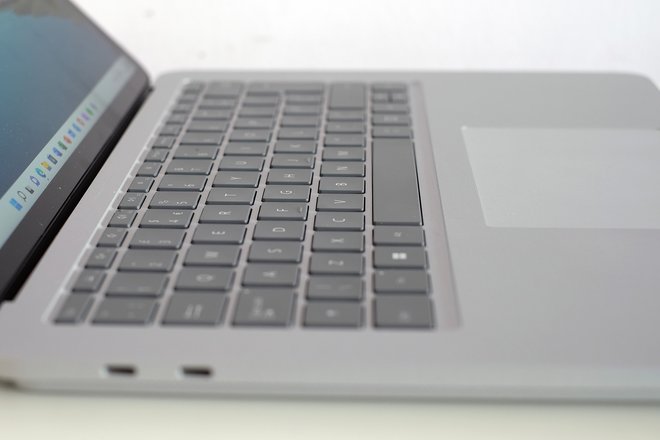 This is a totally fresh design for Microsoft, but that charming Surface series character remains. The casing is magnesium alloy, and the seam that separates the keyboard part from the base is hidden under the cooling lip so the whole thing seems like a single block of metal.

This style makes the Laptop Studio seem substantial. While it’s not intended as a straight-up portable laptop, it’s not a beast, either.

The Microsoft Surface Laptop Studio weighs 1.8kg and is 19mm thick. You wouldn’t want to carry it around all day, but its size and weight are similar to some of the trimmer gaming laptops.

It shines when moving between home and office, room to room, not necessarily when spending half the time on the road, crossing borders in aeroplanes. We’d pick something lighter for that job, like the MacBook Air.

The keyboard is great for all-day working, with the same style of high-quality keys seen in the Surface Laptop range. Given this laptop has slightly more of a ‘pro’ feel, we wish the key travel had been increased a little. The 1.3mm you get here isn’t ultra-deep, just the norm for a good slimmer, lighter laptop.

With that said, we’d be lying if we said we didn’t enjoy typing on the Surface Laptop Studio.

Microsoft also let loose with the trackpad, chucking out the great-feeling mechanical clicker of the Surface Laptops in favour of a haptic pad. This uses tech similar to Apple’s Force Touch trackpads, emulating the feel of a touchpad click.

It’s one of the best we’ve tried, and not far off Apple’s own implementation. Well done Microsoft, although we honestly think we might prefer the company’s mechanical designs. While a haptic approach offers a more consistent feel across the surface, the mellow click of the Surface Laptops feels a bit more substantial – and is a real standout among mechanical designs.

The Microsoft Surface Laptop Studio’s screen carries on the trend of the Surface laptop series by using a tall 3:2 aspect ratio panel. This shape is made for apps over media, and is great for work use.

The refresh rate matches the best MacBook models, at 120Hz, and this means you’ll see fewer cursor trails as you move around Windows. It’s great for gaming, as well, but this laptop isn’t really meant for games, even though it can be specced-up with a discrete graphics processor.

The contrast is decent for an LCD screen, but cannot touch the black depth of an OLED laptop or the MacBook Pro’s mini-LED. Brightness is well below mini-LED grade, too, at 485 nits.

However, let’s get the real context.

It’s super-bright for an IPS LCD laptop, and is more than bright enough unless you want to be mastering HDR video. Bonus brightness is always good for outdoor use, but, beyond 500 nits, you’re really going to start chewing through the battery for that improved visibility.

The Microsoft Surface Laptop Studio is fine to use outdoors, even though it has a glossy screen.

So, is this screen just flat-out worse than a MacBook Pro’s effort? In some respects it is, but it’s also totally different. You have that unusual dual hinge, a touchscreen and support for Microsoft’s Slim Pen stylus.

This is a 4,096-level pressure-sensitive pen with a little haptic motor that vibrates lightly as you draw to make it feel a bit more realistic. It also supports tilt and feels fairly natural in use.

It’s the key to the Laptop Studio’s use as a design or art laptop, and a big part of why the “Studio” name actually makes sense. But you don’t get it in the box. You have to buy it separately, and its standard price is $120 / £120 / €120. Bummer. This is a classic Microsoft move, like selling the Surface Pro 8 without its near-essential keyboard as standard.

Is the screen perfect for designers once you buy the stylus? Maybe. However, its colour reproduction isn’t as rich as, you guessed it, a MacBook Pro. Apple aims to fulfil the DCI P3 standard in its high-end gear these days, and the Surface Laptop Studio manages a little under 90%. Still great, but, if you’re a professional, you might demand full coverage.

There’s some of this same effect in the Laptop Studio’s performance. But, by our everyday standards, it’s great.

There’s also a question of whether Microsoft could have been a wee bit more generous with the specs here. While the CPUs it uses are workstation-style ones, not less punchy low voltage chipsets, the step-up i7-11800H Microsoft has ignored has double the cores of the Core i7 it chose. 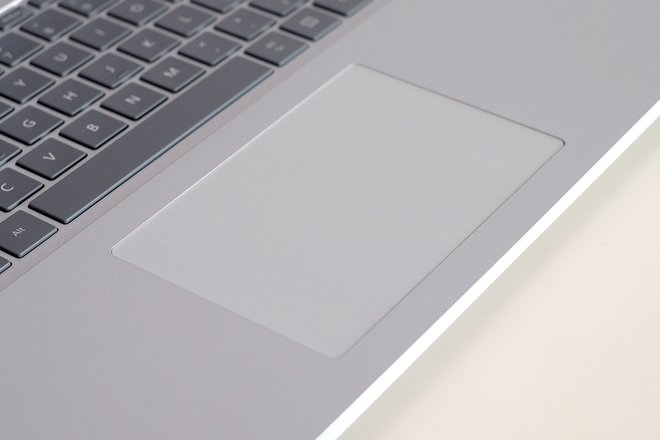 Those bonus cores would make a big difference in apps that can use a lot of hyperthreading or lots of cores, like the pro apps you’d imagine the Microsoft Surface Laptop Studio is made for.

The same applies to the Nvidia RTX 3050 Ti, the one card you can currently get in the laptop. This is a fairly low-end GPU, and there are laptops not that much bigger than the Microsoft Surface Laptop Studio that have punchier RTX 3060, 3070 and even 3080 cards.

Have a think about whether the humble RTX 3050 Ti is enough for your needs. It would be for us, but we’re not buying one to prop up a design or 3D modelling business. Still, given how much Microsoft charges for its upgrades, how much would we end up paying for an RTX 3070? It’s enough to give you the shivers.

There is another explanation: Microsoft is in love with how quiet its cooling system is, and thinks more power would ruin the equilibrium. This fan layout is neat, as we’ve already touched upon. It pulls in cool air from the back half of each side of the laptop and blasts it out nearer the front. And it’s pretty damn quiet – even if you do your best to melt the GPU for a while. There’s just a light breathy whirr. Lovely.

And if Microsoft has become team anti-noise, we can blame Apple, because its processors are so efficient the fans in laptops and Mac Mini devices basically never start spinning for many folks.

If you have a less efficient or less power-frugal processor, you need a larger battery to achieve good battery life. The Laptop Studio has a 56Wh battery, the capacity you might expect from a typical slim and light laptop.

This could end badly, right?

It doesn’t, but Microsoft’s claim of 18-hour battery life from the Core i7 version is comical, making you wonder if their typical usage involves turning the thing off and talking to colleagues half the time. We found it lasts for around nine hours when streaming YouTube video at medium brightness, and near bang on eight hours writing documents at high display brightness.

Or, you can get 76 minutes with the CPU maxed out. However, even gaming laptops with massive 99.9Wh batteries only last around 90 minutes or so when playing demanding games.

The Laptop Studio uses Microsoft’s proprietary magnetic charge cable to fill up the battery, leaving all the other ports free. You get two USB-C ports, both of which are Thunderbolt 4 connectors.

Need to plug lots of stuff in? You may need a dock, and there’s plenty of bandwidth for one. Still, for a pro laptop, these connections are really stingy. These folks need to stop following the Apple blueprint so closely, if not in every area.

The 16-inch MacBook Pro totally changed our impressions of what laptop speakers could sound like, with quality comparable to a small Bluetooth speaker. Microsoft took notice here, and has given the Laptop Studio an excellent array comprised of four speakers that provide a decent serving of bass and enough volume for listening to become borderline uncomfortable in a quiet room.