The included video editor in Windows 11, Clipchamp, is getting a long-overdue improvement following its lackluster initial launch. Microsoft is bringing support for 1080p video exports to the free tier of Clipchamp, meaning you no longer have to pay a premium for what should be a relatively basic feature.

Clipchamp is a cloud-based video editor that Microsoft acquired last year in the lead up to the release of Windows 11. Upon launch, Windows 11 came with a shortcut for a Clipchamp PWA, which had to be downloaded and installed, but Microsoft recently started preinstalling the app with the OS. That’s when some users noticed that the pricing structure seems like a rip-off, considering the free tier only allowed users to export video at a measly 480p resolution. Even the first paid tier, which cost $9 per month, would only give you 720p exports.

Now, 1080p video exports are included all the way down to the free tier. All the other perks from the paid tiers are the same, which includes unlimited cloud storage and audio stock in the Creator tier ($9/month), a brand kit in the Business tier ($19/month), and unlimited video and image stock in the Business Premium tier ($39/month). Oddly enough, Microsoft still isn’t allowing users to export video at a resolution higher than 1080p on any of the Clipchamp tiers. If you’re interested in 4K video, this is still not ideal. 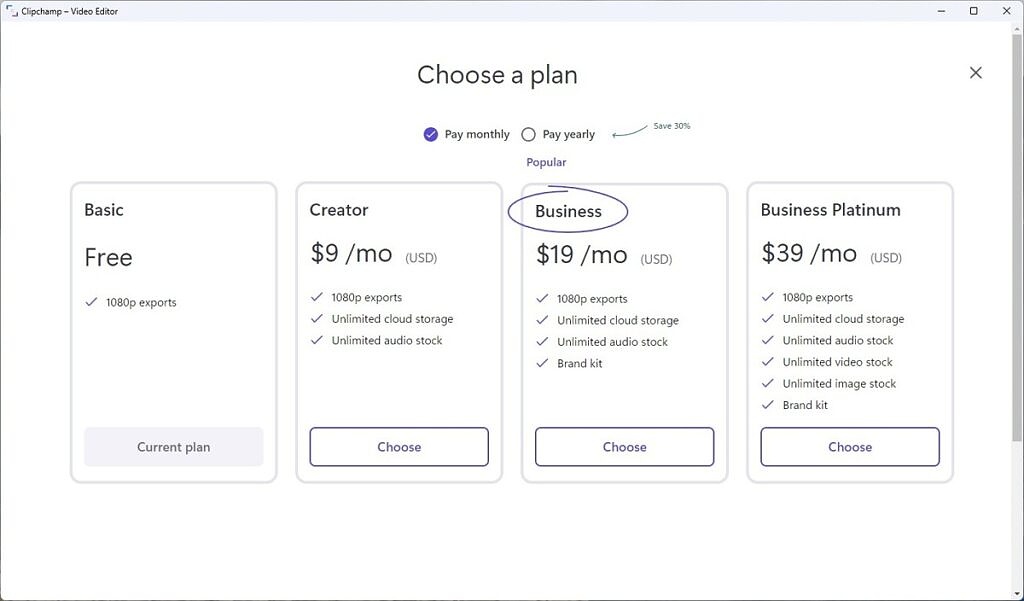 Still, this is a very necessary change, and an interesting one considering Microsft said it wasn’t going to be making changes to the pricing structure of Clipchamp. To be fair, the prices are the same as before, but the value proposition has changed significantly with 1080p video being available to everyone. It remains to be seen if new value will be added to the higher tiers or if Microsoft will just simplify the pricing structure in the future.

It would make sense for additional features to be tied to Microsoft 365, but there’s been no official indication of that happening. We’ve reached out to Microsoft about these changes and we’ll update this article if we hear back.