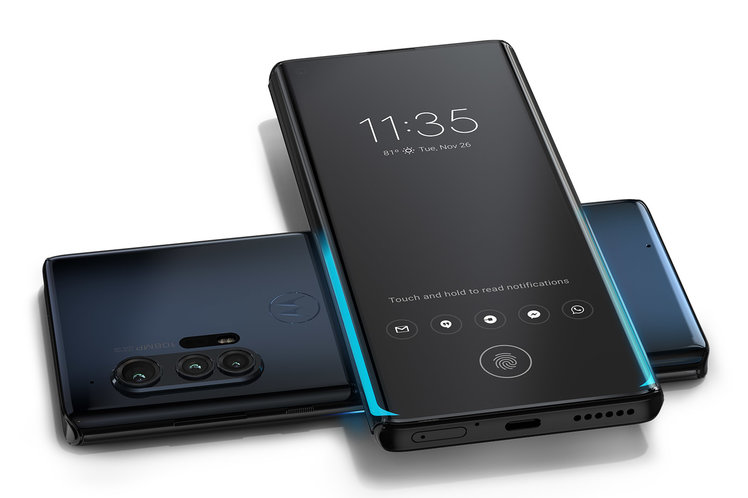 It’s been a long, long time since Motorola threw its hat into the premium flagship ring. Sure, we’ve had the Razr tickle our nostalgia, and Moto Mods got to 5G first, but it’s been years since a true top-of-the-stack Moto ruled the roost.

Well, now it’s time for Motorola to come back with its fists swinging. Say hello to the Moto Edge+. Here’s everything you need to know.

Well, the first thing to know is that there’s actually two devices: the standard Edge and the all-powerful Edge+.

That little ‘plus’ symbol of the latter is mighty important, as it means you’ll pay a lot more cash and get a bunch more features. We’ve summarised them above in at-a-glance bullet points. The main feature below will focus on the Edge+ model.

While phones aren’t as ultra-wide as they once were (phew), Motorola has sometimes persevered with very narrow displays, at a 21:9 aspect ratio. Which is exactly what you get in the Edge+. That’ll make it easy to hold in one hand, but very tall, given its 6.7-inch diagonal measure, which we’re not sure makes complete sense. 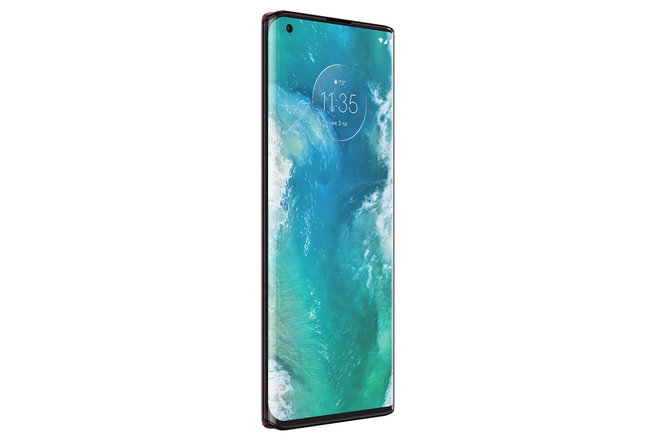 The most interesting thing about the display is what Motorola calls ‘Endless Edge’. Others would call it a Waterfall Display. Or Overflow Display. It’s where the screen curves right around the edges to give the impression of zero side bezel. The Edge+ utilises this for swipe controls, too, if you want, or you can switch it off entirely to avoid the potential of accidental touch. We like that there’s a choice.

Although Motorola hasn’t opted for the highest resolution going, we suspect this will balance well with battery life. The same can be said of refresh rate: the 90Hz panel here offers an uplift in smooth scrolling compared to many current panels, but it’s not at 120Hz like OnePlus or in 144Hz land like Red Magic. We don’t think that matters much, as most won’t see a huge benefit to apps and games.

A defining part of any phone these days is the camera. And Motorola isn’t holding back, adopting the same large-scale ultra-high-resolution sensor as per the Samsung Galaxy S20 Ultra. That’s to say: it’s 108-megapixels. Yes, one hundred and eight, which is like taking eight 4K televisions and stacking them side by side. There’s that much resolution on this much larger than usual sensor. 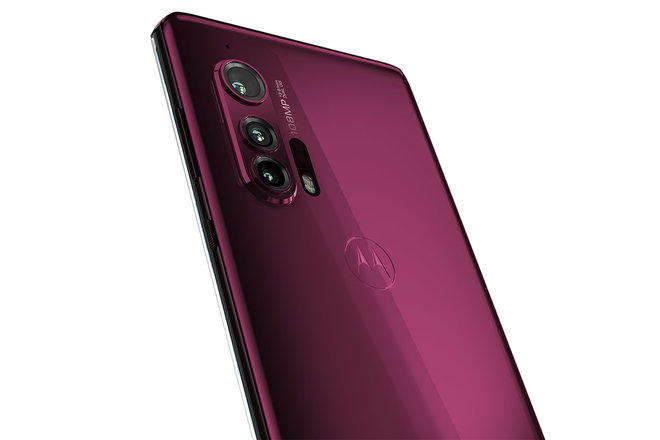 However, Motorola utilises that resolution in a variety of ways. Principally its Quad Pixel technology takes four pixels and squashes them into one, oversampling, thus delivering better quality in a still massive 27-megapixel result. Or you can activate full-res if you so wish. It also influences the zoom capability, by providing data that’s used in combination with other optics to refine results.

Because, being 2020, the Edge+ of course comes with more than just one camera. Indeed, there’s three on the rear. That massive 108MP main sensor, alongside a 3x optical zoom at 12MP, and a wide-angle and macro at 16MP. We’re glad to see a higher-resolution offering for macro at last, as Motorola’s previous 2MP implementation has been poor.

Under the hood the Moto Edge+ reads every bit the flagship, delivering a specification that hits top spot at every turn.

That means the latest Qualcomm Snapdragon processor, the 865, paired with 12GB RAM (DDR5). It means 256GB storage (with ultra-fast UFS 3.0). 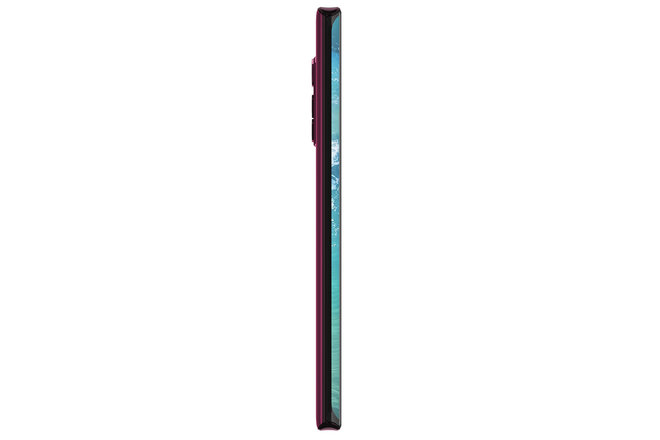 It also means Wi-Fi 6 and 5G connectivity (both mm ave and Sub-6GHz). Basically that means this is the fastest connected phone you can lay your hands on, at the time of writing. That’s boldly future-proofing, as it’s rare to find a mmwave handset – and that probably goes some way to explain the price of this device.

There’s also a huge battery under the hood, a 5,000mAh capacity cell, which we would anticipate to last well beyond one day of use – even if you’re pushing things with lots of apps. Such a battery and slimline screen ratio are the reason it’s a thicker-than-usual device, though, at 9.5mm.

Oh, and there’s a 3.5mm headphone jack. A rare thing indeed for any flagship phone these days.

On the software front, Motorola has always been good at taking Google’s Android operating system and not mucking about with it too much. As such it looks pure and clean. What Moto has consistently added to its devices, however, is a Moto app.

In the Moto Edge+ that’s slightly different: it’s the Moto app as you may know it, but accessing what Motorola calls MY UX, with the ability to hook into settings to adjust themes, styles and fonts as you wish. There are also sections for Moto Display, Moto Actions, and Moto Gametime (as first seen in the Moto G8 Power) to handle the respective always-on display, physical actions returning feature activations, and DND gaming space.

So the big question: how much will all this cost? It doesn’t come cheap. The Moto Edge+ will retail for €1199 in the USA. Other pricing is not yet known – but Motorola did confirm to us in a call that the handset will be coming to the UK and EU from June 2020 (regional prices TBC). 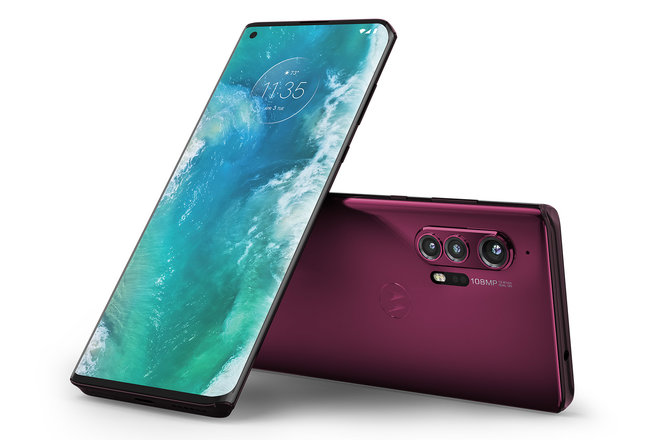 The Moto Edge (i.e. not the Plus) is a whole lot less, at £549.99/€599. You lose the 108MP camera, mmwave 5G, HDR10+ and top-spec processor, but the screen is otherwise the same type, scale and resolution – which could make it the more obvious pick for many. This handset will also arrive to the US market in June 2020 (regional price TBC).

This article was originally published 22 April 2020. It has been updated to include additional release information, pricing and regions.

Rumours: What happened prior to launch?

There were many rumours surrounding the Moto launch, which we kept on top of over a number of months. Here’s the history in the lead-up to this launch:

A full set of images was shared by Evan Blass, probably the most renowned leaker in the business, showing off the Edge+’s design.

Evan Blass has shared renders of the Moto Edge+ in two different colours, giving us a detailed look at the new phone.

07 March 2020: Details of the Moto Edge+ camera shared on Twitter

06 March 2020: These Motorola Edge+ renders show a slick flagship with a waterfall display

Motorola appears to be readying a new flagship, called Motorola Edge+, according to a recently leaked spec sheet resulting in detailed renders.

Motorola’s next phones are thought to be called the Motorola Edge+, Motorola One Mid, and Motorola Moto G8 Power Lite.