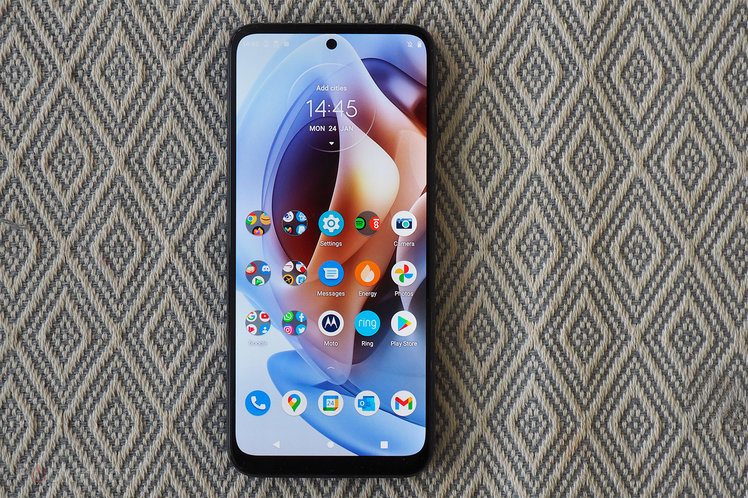 Blink and you’ll miss it: Motorola’s budget range moves fast, with numerous handsets appearing in its G series ranks. In 2021 the lower-end models were the Moto G10 and G30, but having both in existence didn’t make a massive amount of sense – and we thought the G10 was ‘no longer the default choice’ as a result.

Hence this handset, the Moto G31, which is a bit like taking those two aforementioned devices and merging them into one all-new solution, which sits beneath the G50 model (that’s reserved for those wanting 5G connectivity) in the G series line-up.

Don’t want 5G? Don’t want to pay a lot? Well then, is there any better budget Android phone out there than the Moto G31?

Step by step Motorola has improved its affordable offering over the years. The G31 looks much better than the G30 in our view. Firstly, because its colour palette is much more sensible (no ‘Pastel Sky’ here, just a simple grey or blue textured option). Secondly, because it’s updated the screen and gone with a tidier punch-hole instead of a notch (although the shiny ring around that circular opening is a little distracting). 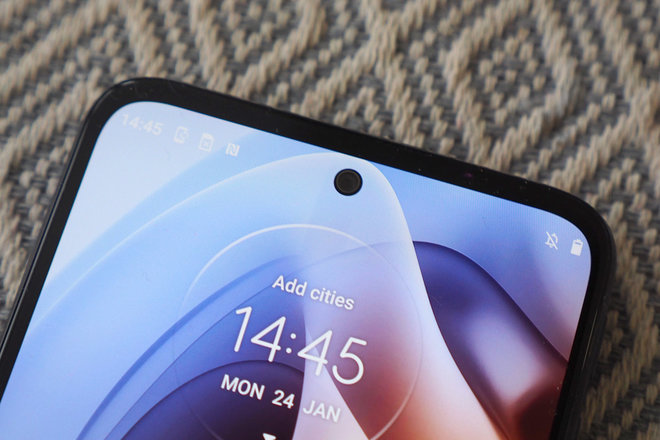 The screen is the real selling point of the G31 though. It ups the resolution compared to the older G30, which was one of our main criticisms of that device. Here, however, you get ample pixels to make content on this 6.4-inch panel pop. It’s also AMOLED, not LCD, which delivers those typical deep blacks and punchy colours with ease.

The panel isn’t the whitest or very brightest ever – side-by-side with our Moto G200 it’s clear the flagship wins in both regards, delivering a ‘cleaner’ image – but in isolation you’d never know and there’s still ample brightness from the G31 to cut through varying lighting conditions too.

What the G31’s display foregoes, however, is a faster resolution panel. That’s right, no 90Hz or greater here, so theoretically on-screen animations and in-software scrolling won’t be as smooth. Problem? Not at all. We’d take the more sensible resolution choice here all day long. As the baby in the Moto G range, the G31 makes the correct choices in terms of its screen spec allocation in our view. 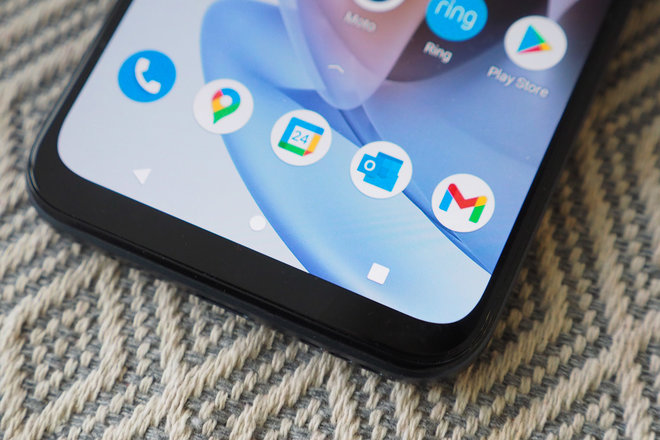 As with all Moto G series phones, however, the bezel could do with a little trimming. It’s not huge, by any means, but plenty of competitors give a more edge-to-edge visual when it comes to screens – and Motorola seems to be holding back in this department.

Elsewhere there are other positive features: a 3.5mm headphone jack sits up top if you want to use wireless headphones; a side-mounted fingerprint scanner works nice and quickly for sign-in (some won’t like its position within the power button though); while that textured design is neat and the rear camera unit not so excessive that the phone wobbles about all over the place. It’s all a simple, straightforward and effective series of spec and design choices that befit the budget.

When we first received the G31 we’d assumed it would have a Qualcomm platform inside (the G30 and G10 both did). Instead Motorola has opted for MediaTek’s Helio G85. Now, MediaTek is making waves with its new higher-end chipsets, such as the Dimensity 9000‘s potential, but there’s less fanfare around its more entry chipsets. But does that really matter? Short answer: no. 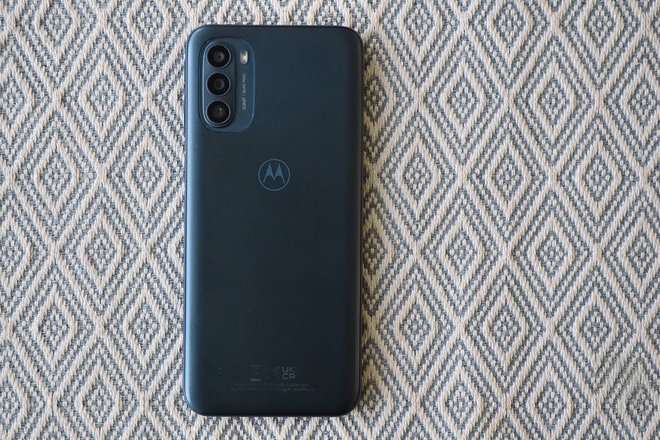 After setting up the Moto G31 it’s proven itself perfectly capable of delivering on our usual suite of apps. So whether playing a game of South Park: Phone Destroyer, streaming Spotify, or browsing multiple tabs in Google Chrome, the phone can handle such tasks.

It won’t handle them like a flagship, mind, with slightly longer app loading times – and you’ll notice the slightest of lag and minor stutter in animations from time to time. Still, the Wi-Fi speed has proven pretty good – something entry-level Moto G series models have been notoriously poor with in the past – and the experience, considering the price, is perfectly decent.

Part of this comes down to the software experience, which is based around Google’s Android 11 operating system. Motorola doesn’t really play around with it much, only adding its Moto app, which is the centre for controlling gesture inputs (flip to wake and the like), styles (to personalise), display settings (always-on, peek, etcetera), and gaming (Game Center can switch off certain notifications for particular apps while they’re open).

That all adds up to a clean software experience with no unwanted ads, pop-ups, or unwarranted software seeking your attention. It’s a big part of what Motorola gets right in all of its devices, so compared to other budget Chinese competitors – from, say, Xiaomi or Oppo – the Motorola is just more reliable and won’t fall upon notification issues or other such bugs as we’ve often found in the competition.

The G31 is also really long-lasting, thanks to a massive battery capacity. The combination of that and the not-so-taxing processor means you’ll get through a day easily. Indeed, we reckon you could stream non-stop for 16 hours and still make it to bedtime without issue. Use it on-and-off throughout the day and, well, this device is knocking on a two-day life per charge no problems. We’ve been managing a solid 24-hours-plus of use without qualms. 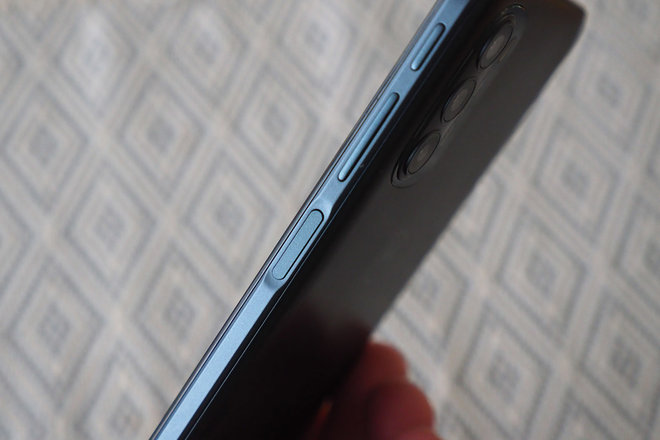 Speaking of charging, the 10W on offer here isn’t especially fast. There’s also there’s no wireless charging. But that’s reflective of its position – after all, this is the 2021-22 baby of the Moto G range. Even the step-up Moto G50 isn’t that much quicker, really, with the same battery capacity and a (50 per cent speedier) 15W charger.

The G31’s camera proposition shows some progress from Motorola. Why? Because it has a triple rear camera, not a quad rear camera like the G30 before it. Don’t follow? It’s because, frankly, manufacturers have been overselling trashy ‘cameras’ for a couple of years now, putting umpteen lenses on that you just really don’t need.

But while the G31 is a step in the right direction in that regard, it’s not totally clear of the woods. Let’s start with the bad: the 2-megapixel macro camera is borderline unusable. Based on its small-scale, soft results and total lack of autofocus possibility, we’d always refrain from using it. Only the camera app is often desperate for you to switch over it. Out advice is don’t, it’s a waste lens that shouldn’t be part of the G31’s make-up.

Things do get better though: the inclusion of a wide-angle has its uses, here the same 8-megapixel offering as found on the previous G30 model. Sadly, it’s not a particularly great rendition of what wide-angle phone camera lenses can do, so expect distortion, image noise in low-light, and limited practical application. That said, on those brighter days where you want that wider shot to cram a building into the frame, or a group shot of your mates, it’s really handy to have on hand rather than not.

The pick of the bunch, of course, is the main lens. The G31 opts for a 50-megapixel snapper, which may sound ‘worse’ than the 64-megapixel one on the older G30, but given all these ultra-resolute sensors process down to more digestible resolution results anyway, it’s a by-the-by numbers thing. Don’t obsess over the numbers, just be pleased that one out of the three lenses on the G31 can actually do its job amply.

There aren’t high-end features such as optical stabilisation (OIS), but you do get phase-detection autofocus (PDAF) which makes tap-to-focus quick, plus the app will bring up an exposure slider on screen for quick and easy adjustments if you want to make any. 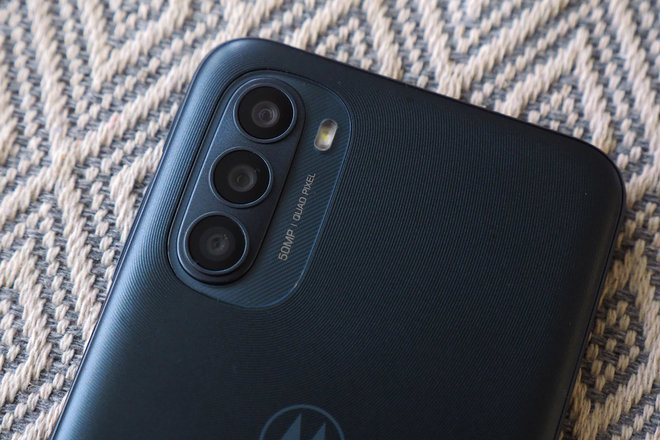 Don’t expect computational photography prowess here as you may find elsewhere – the night mode, for example, is average and nothing like, say, Google’s excellent mode on the Pixel series – but there are enough automated modes, including HDR (high dynamic range) to help the Moto’s results along. Low-light isn’t this sensor’s best friend, but it’ll just about be able to deliver shots (from the main sensor anyway) if you hold it nice and steady.