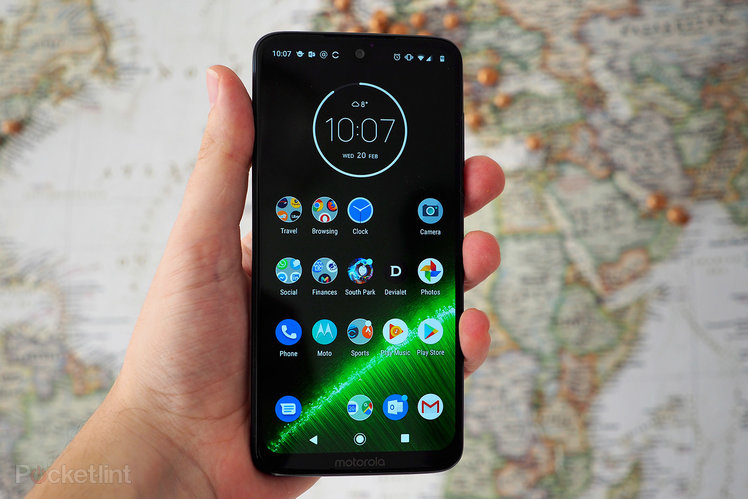 The Motorola Moto G series has long been given the accolade as king of the affordable phone. Back in 2019, however, with a lot of competition hot on its heels – yes, Honor Play, we’re looking at you – Motorola diversified the G7 range more than ever before, with no less than four handsets available (G7 Play, G7 Power, G7, G7 Plus). It’s gunning for king, queen, prince, heck, even third-removed cousin to the throne in its attempts to appeal to every possible avenue.

The Moto G7 Plus is the equal biggest of the lot – as the ‘standard’ G7 is the same size, believe it or not – with the most power on tap (yep, the ‘Power’ model mentioned above has a massive battery, it’s not got the beefiest chipset). As the number of brackets in the last two paragraphs suggests, we find the close proximity of each G series device a bit too similar to make total sense – especially when you take into account the newer G8 range.

If you’re eyeing up the G7 Plus as a bargain proposition then fair cop, it’s a decent phone. But in light of newer handsets – and not at greater expense – here’s how everything fits together for this phone. Is it still a perfect balance; the king for the everyman?

At the beginning of its life, the G series was a small, plasticky little phone. But times have changed and Motorola has evolved. Indeed, the G7 Plus doesn’t remotely resemble its years-old siblings, it’s gunning for a much higher-placed design aesthetic to keep it competitive. 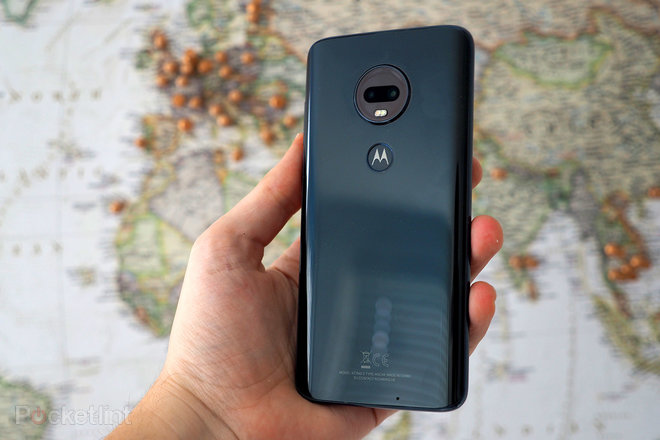 Compared to 2018’s G6 Plus – read our full review of that phone right here – the G7 Plus might look fairly similar, but all the nips and tucks that have taken place make for a very different phone. The G7 Plus has a taller screen with more visible real-estate than before, the front-facing fingerprint scanner has been ditched for the far more sensible placement on the rear (where the “M” batwings logo resides), and the ‘chin’ and ‘forehead’ bezels have shrunk significantly.

Our only real moan about the design is Motorola’s insistence to plonk its name on the front of the phone. Given the limited amount of bezel on display in the G7 Plus, that makes this logo look even more as though it’s been shoe-horned in, when it doesn’t need to be there at all. Pop it on the back, if it’s needed at all (we think the “M” batwing logo is ample, really). Thankfully, however, the Moto G8 Plus has done away with this unneeded branding. 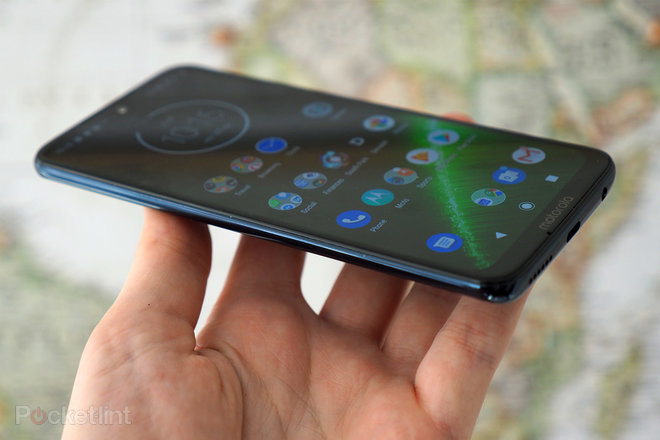 The G7 Plus retains many features: there’s a 3.5mm jack for headphones (absent in too many flagship devices these days); microSD support means you can expand the on-board storage at minimal cost, which is great for media; a USB-C port makes for fast-charging and future-proofing when it comes to connectivity; and there’s even some water-repellent coating (although it’s still not officially IP-rated like so many competitors, which is a shame).

It’s Plus by name and sorta-is-sorta-isn’t plus by nature. As we said up top, the G7 Plus has a 6.2-inch screen size – the very same as the ‘standard’ G7 – so you’re not buying this phone for larger physical size, instead for its best-in-series power and improved cameras proposition. 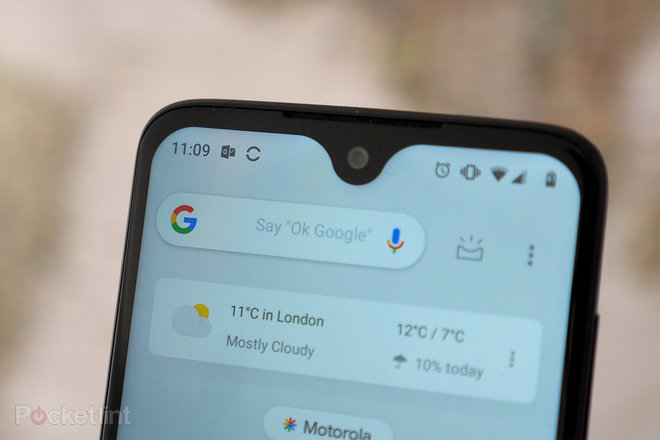 Anyway, back to the screen itself. Now, 6.2in might sound large, but the elongated aspect ratio ensures that it’s not unwieldy in the hand. Gone are the days of hard-to-handle iPhone 8 Plus-style thicknesses, which makes the G7 Plus feel perfectly at home in the hand. The newer G8 Power and G8 Plus offer screens a tiny bit larger still.

The G7 Plus was the first G-series Moto to introduce a notch. But it’s not a massive one, rather a ‘dewdrop’ or ‘teardrop’ notch, which, as its name suggests, looks like a droplet to the top of the screen. We prefer this solution to more recent punch-hole solutions too – as it rarely gets in the way of key visuals.

Resolution is an expanded Full HD. As phones go that’s perfectly fine – you won’t be squinting, you won’t be distraught at the number of pixels you can see with it crammed mere inches from your nose – and the LCD panel makes for ample colour and brightness. 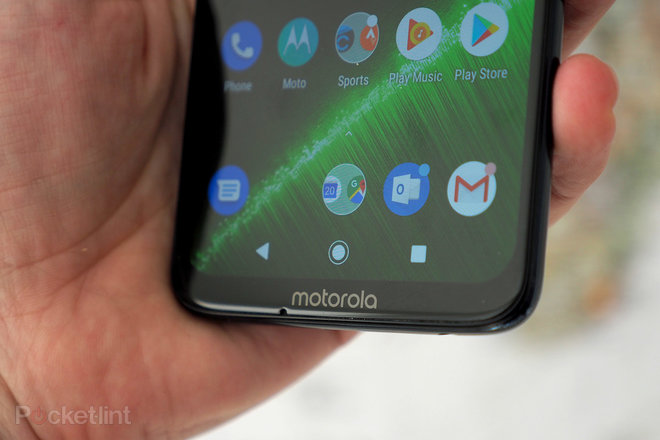 The screen’s biggest problem, however, is how that brightness is handled. By default auto-brightness is active (as it should be) and, well, it’s hypersensitive in its response to adjusting ambient light. Far too often this screen dips to being excessively dim, which needs a swipe down to manually boost it to acceptable levels. Sure, Motorola is trying to eke out the best of battery life, but we find this approach tiresome – it’s probably the biggest ‘con’ about this phone.

One of the biggest reasons this phone has ‘Plus’ in its name is down to marginally more powerful hardware than the standard G7 model. Since, with the follow-up G8 series, Motorola has done away with processor points of difference – making the G8 Plus only really stand apart based on its camera hardware.

On the one hand the G7 Plus’ middling chipset is underpowered compared to the similar-price competition, like the Honor Play. On the other it’s not a slow experience, so the choice of hardware isn’t a massive bother.

Sure, top-spec games aren’t going to run at best possible graphics and frame-rates might have to be held back, but from our playing of South Park: Phone Destroyer on a daily basis we’ve not found that to be an issue. No latency problems, no stuttering due to excess characters/sprites showing on screen, with decent sound output thanks to stereo speakers and Dolby Audio. In that regard – whether you’re working, gaming or mucking about with some other apps – the G7 Plus is a perfectly palatable phone at a great price point.

There is a point of note when it comes to battery life, though. While the RAM and storage remain the same between G6 Plus and G7 Plus, the latter model has reduced its battery capacity to 3000mAh (from 3200mAh). That might explain why the software is so keen to automatically dim the screen every chance it gets – as we said above. 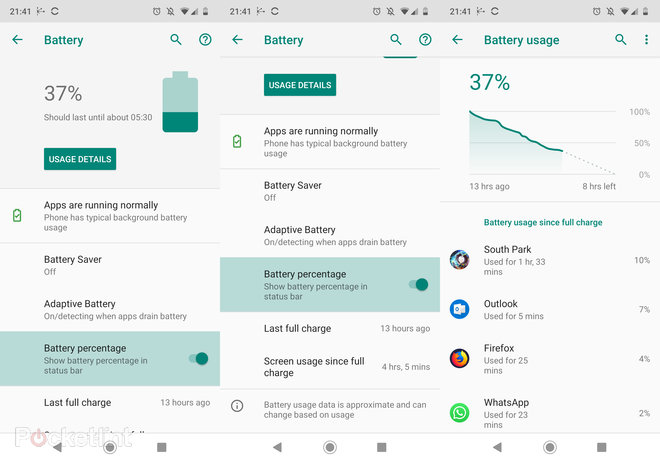 That said, that 3000mAh cell does a decent job overall, so you should get through a normal day. But if you want zero anxiety then Moto has gone in particularly hard with newer models – the G8 Power, for example, offering a battery that’s two-thirds more capacious.

If the G7 Plus’ battery does need a quick top-up then the 27W charger included in the box will juice the phone up about 30 per cent quicker than the 15W charger found in the G6 Plus’s box. Even just 15 minutes at the plug will deliver hours of additional use, if you’re in a rush to get out and about.

It’s also worth putting in a word about software. Although, thankfully, there’s nothing at all to moan about. Moto launched the G7 Plus on Google’s Android Pie (9.0) operating system, making for a clean and clutter-free experience, which updated to Android 10 in January 2020.

The only additional app you’ll find on board is the Moto one, a hub where Moto Voice, Moto Display and Moto Actions can be accessed – used to control the Google Assistant-based voice app, the ‘peek notifications’, and physical actions, respectively.

Lastly it’s onto the one area where the Plus model excels above and beyond its G7 cousins. That’s really what the “Plus” is about – not more size, not really more power, but more camera kudos for this lower price point.

The Plus is the only model in the G7 range, for example, with optical image stabilisation (OIS) on its rear camera. Which makes for a rather fine camera at this price point. The 16-megapixel sensor is paired with an f/1.7 aperture lens, which means even shooting in dim conditions isn’t a problem. You won’t find the same ultra-fast autofocus here as in, say, a Huawei Mate 20 Pro, but we’ve not found the Moto to struggle.

In good light there’s a lot of detail. A close-up shot of a cushion reveals the stitch with finery, showing that even budget phones can deliver big when it comes to quality.

If you want to get aboard the blurred-background bandwagon then the G7 Plus tailors for this with its Portrait mode too. The second rear camera, at 5-megapixels, is designated for comparison and depth data, to help produce more accurate edges when the software blurs that background. It works rather well, we’ve found, with the adjustable aperture slider making for convincing faux bokeh.

However, don’t expect total miracles in low-light situations. The G7 Plus copes well with dim interiors – in part helped along by HDR (high dynamic range) coping with highlight and shadow balance – but this is when details begin to lack somewhat. However, the stabilisation system will help you get a sharper shot – even when you’re not thinking about it. 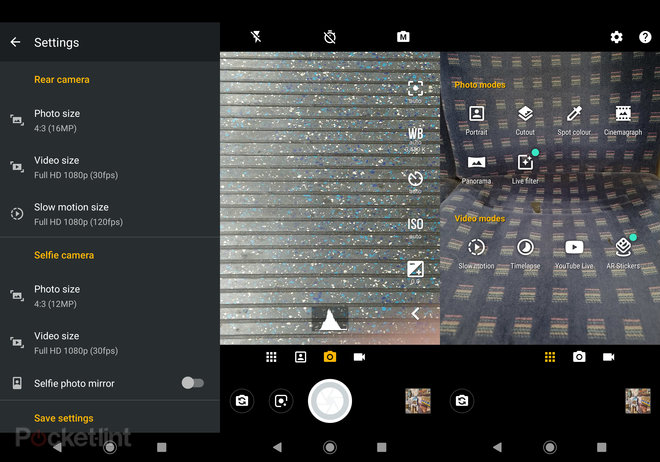 Other features include Auto Capture (to shoot when a smile is detected), Smart Composition (which auto-crops a second image based on the rule of thirds), alongside manual mode, portrait mode and spot colour – the last three of which are available on the Moto G6 Plus – as found in the mode section via a swipe from left-to-right in the camera app.

Overall the Moto G7 Plus has a capable camera that’s fitting of the price point. It’s not the best camera on the market, it doesn’t have any fancy Night mode, but throughout a variety of conditions it performs pretty well.