Lenovo’s subsidiary Motorola is set to launch its new smartphone Motorola Edge 30 Pro. According to the latest report, this upcoming smartphone’s global and Indian launch is set for February. However, its exact launch date has not been disclosed at the moment. Most of the specifications of the phone have already been revealed. The smartphone will be a rebranded version of the Motorola Edge X30 launched in China last month.

The Motorola logo is not placed in the middle of the rear panel, and unlike all other Motorola phones, it is placed at the bottom left corner of the device. An oval-shaped camera module houses three camera sensors and an LED torch. There is a punch-hole cutout at the top center of the display for the selfie camera. The power and volume buttons are on the frame’s right side.

If the rumors are believed, the Edge 30 Pro can get the same features as the Edge X30. However, a slight change can be seen in its design.

Motorola Edge 30 Pro is expected to get a 6.7-inch full-HD + POLED display with a refresh rate of 144Hz, and it will come with HDR10+ support. Qualcomm Snapdragon 8 Gen 1 processor can be found in the device. The smartphone will be equipped with up to 12GB of RAM. 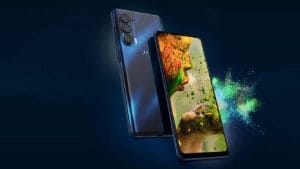 A triple rear camera setup can be given in the company’s handset. A 50MP primary camera, a 50MP ultra wide-angle sensor, and a 2MP depth sensor can be housed on the backside of the smartphone. A 60MP front camera can be found for selfies and video calling. Apart from this, a 5000mAh battery with 68W fast charging support can be found in the device.

There is no information about the phone price that will be launched in India. The company is expected to get more details about other specifications and the smartphone’s launch in the coming days.