We already love the Moto G5 Plus and Motorola has just super-sized it in the form of the special edition Moto G5s Plus. Packing a bigger display than before, as well as some refined design work and a new dual-lens camera, the G5s Plus is one of the best sub-£300 smartphones you can buy right now. Here’s why.

As much as we love the Samsung Galaxy S8 and iPhone X, these premium mobiles are really for those well-off consumers lucky enough to have buckets of disposable cash. For the rest of us, we really just need a smartphone that can cover the basics and provide a satisfying user experience.

More demanding users on a strict budget should seriously consider Motorola’s Moto G-series handsets. The Moto G5 Plus sits at the top end of the family, offering a capable camera and strong specs, as well as a streamlined Android interface - all for under £300 SIM-free.

We’re still big fans of the G5 Plus six months after its launch, as you’ll see in our long-term review. However, Motorola has just complicated matters by releasing a new special edition model of this affordable blower, known as the Moto G5s Plus. The G5s Plus doesn’t just serve up some slightly tweaked specs, compared with the original handset. Rather, you get a fresh new dual-lens camera, revamped bodywork and a bigger display for enjoying media on the move.

We’ve spent a couple of weeks with the Motorola Moto G5s Plus and here’s our in-depth review of this special edition smartphone.

You can also check out our best budget smartphones round-up, to see alternative mobiles that will suit your price limits.

We’re happy that budget smartphones these days no longer come packing cheap, plastic frames. Rather, you can expect a sturdy metal design even from very affordable handsets, including the great-value (at just £129) Moto E4.

The Moto G5 Plus offered a sleek two-tone metallic finish that proved pleasingly rugged, yet the G5s Plus goes one further with its unibody design. This seamless construction - if you don’t count the aerial banding - stretches around the edges of the handset, complete with some shiny chamfered corners to break up the matte surfacing. As far as looks go, this special edition handset is one of the more attractive affordable blowers out there.

Although the screen size has increased over the standard Moto G5 Plus, Motorola has kept the dimensions of the G5s Plus almost identical. That’s thanks to the reasonably narrow bezels above and below the display. One-handed use is still quite tricky, as this handset is rather wide. Thankfully you get some help in that department from the Moto Assistant, which we’ll touch on later.

Although this model isn’t water resistant, you can still happily use it in the rain without much worry. We’ve also found that the G5s Plus is tough enough to chuck in a bag and generally bash around, without leaving any significant marks or scuffs on the surface. We’ve treated the handset quite roughly to fully test it out and you’d have to seriously squint to make out any kind of damage.

In fact, our only real complaint about the design work is that jutting camera lens, which sticks quite far out of the Moto’s rear end. Luckily the glass cover seems to be pretty hardy as well, so far resisting any scratches.

The G5s Plus’ unibody finish is rugged as well as attractive, with some pleasing refinement compared with the original model.

The jutting camera lens really does stick out quite far, while some rivals such as the Samsung Galaxy J series offer full water resistance for a similar price.

The G5s Plus boosts the screen size up to 5.5-inches, which is certainly spacious enough to comfortably enjoy some Netflix on your commute. Despite the larger display, that Full HD resolution keeps everything nice and sharp. High-definition movies look great, although the IPS tech means you don’t get lush, vivid colour reproduction, as you do on AMOLED screens. Even Motorola’s Vibrant mode doesn’t seem to make much difference.

Still, you get a nifty night mode for evening use, which filters blue light for a more comfortable, easy-on-the-eye experience. On top brightness it’s strong enough for easy outdoors use as well, even when the sun is shining.

You get 32GB of storage packed into the Moto G5s Plus, of which roughly 10GB is already filled with the OS and other bits. That’s still plenty of room for apps and the rest, while you can shove in a microSD memory card to carry around a massive media collection.

The bigger screen is still pleasingly sharp, as well as bright enough for strong clarity in pretty much any conditions.

We’d struggle to complain about any aspects of the Moto G5s Plus’ media capabilities, to be honest. Some rivals offer more striking colour reproduction with their AMOLED panels, including once again Samsung’s Galaxy J series.

There’s absolutely no difference between the Moto G5s Plus and standard Moto G5 Plus when it comes to the user interface. Motorola has once again served up a vanilla version of Android Nougat, which should therefore receive a swift upgrade to Oreo in the very near future. No clunky overlays or unnecessary bolt-ons here.

In fact, the only serious addition to Google’s OS is the Moto Assistant, which is genuinely helpful. This offers a variety of motion-based controls that can be used to quick-load the camera, for instance, as well as shrink down your apps and desktops so they’re easier to use with one hand.

You can check out more about these software features in our Moto G Series tips and tricks guide, as well as in our hands-on video below. 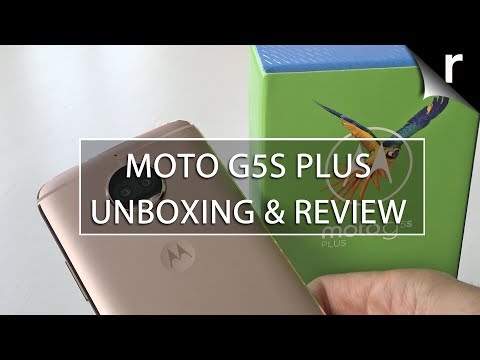 You also have a fingerprint sensor housed beneath the display, in the physical home button. This can quickly and effectively unlock the phone instead of a PIN, with up to five fingerprints recognised. You can even replace the on-screen back, home and recent apps buttons with the sensor, using an option inside of the Moto Assistant. This uses gesture recognition instead and it works well, as it does on the Huawei P10 and Honor 9 handsets.

Motorola’s lack of tinkering means you get a smooth, clutter-free user experience. We’re also expecting a timely update to Android Oreo as a result. Meanwhile, the Assistant delivers some very helpful shortcuts and features that make life that little bit easier.

Some might complain that the Moto G5s Plus doesn’t have any sexy, unique features to help set it apart from rivals.

Another area that hasn’t changed is the performance specs. You once again have a Qualcomm Snapdragon 625 chipset packed inside the Moto G5s Plus, backed by 3GB of RAM. That’s a reasonably efficient mid-tier platform, which handles the clutter-free version of Android with ease.

You’ll often have to wait a second or so while your app loads after tapping the icon, while the odd little pause crops up here and there during everyday operation. However, the phone is pleasingly stable, with no crashes or tantrums on show during our fortnight of full-time testing. You can play the latest games without a struggle too.

Once again you have a 3000mAh battery stuffed inside the G5s Plus, to match Moto’s original G5 Plus smartphone. This gives over a day of use between charges, as long as you’re not constantly streaming YouTube or blasting through demanding games. You’ll happily enjoy a full 36 hours of life in most cases, while the Turbo Charge support means you can power up quickly when the battery is drained.

Sadly the charging port isn’t the latest reversible Type-C, so you’ll have to pay attention when sticking the cable in. That also means slower data transfer when you’re hooked up to a computer.

That clean version of Android and Qualcomm’s mid-tier Snapdragon 625, combined with a generous 3GB of RAM, makes for quite smooth operation. You’ll also get solid battery life, thanks to the large cell and efficient platform.

You’ll still see the occasional little stammer or pause, while the lack of Type-C USB connectivity is a weird one.

One of the biggest differences between the Moto G5s Plus and the standard vanilla G5 Plus is the camera tech. That original 12-megapixel snapper, which was impressive for the price, has been completely gutted and replaced with a new dual-lens 13-megapixel shooter instead.

This is the first Motorola mobile to come packing a camera with two lenses, although another handset sporting similar optics - the mid-range Moto X4 - just launched over at IFA 2017. Of course, double the lenses doesn’t necessarily mean better photos and video. That’s why we’ve thoroughly tested the Moto G5s Plus’ camera and also directly compared the results with the Moto G5 Plus, to see what difference the secondary lens really makes.

Check out our full Moto G5s Plus camera review, for photo and video samples and our full analysis. We’ve also rounded up our favourite budget-friendly camera phones, which deliver great-looking photos without breaking the bank.

The G5s Plus is great for capturing everyday snaps and offers strong depth effects now with its secondary lens. You can also shoot up to 4K resolution video.

Sadly the Moto G5s Plus isn’t as strong at capturing images in low light as the original G5 Plus.

Overall, the Moto G5s Plus improves on the already-great G5 Plus, offering a lot for less than £300 here in the UK. Refined design work, a bigger display and that same vanilla Android interface makes for a strong all-rounder, while the improved selfie camera will appeal to Instagram fans. However, that dual-lens snapper on the back merely does things differently rather than boosting an already great camera.