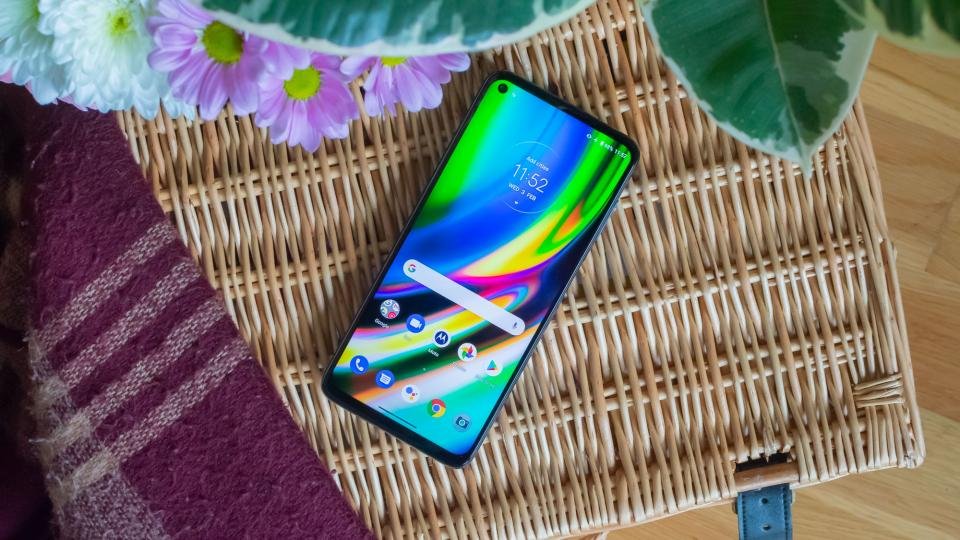 The Moto G9 Plus has a lot to live up to. Motorola’s Moto G line has a solid and well-earned reputation for being among the best smartphones you can buy on a budget. Aside from a dip with the Moto G5, the phones have been consistently great performers at appealing prices.
But the cheap phone marketplace is more competitive than ever with Chinese handsets from the likes of Xiaomi and Realme putting pressure on the old guard. Can the Moto G9 Plus match these plucky upstarts? 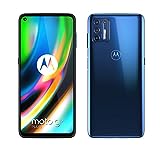 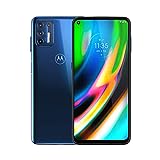 Motorola Moto G9 Plus review: What you need to know

The Moto G9 Plus is the biggest and best of the trio of G9 handsets that Motorola has treated us to this generation. First there was the Moto G9 Play – a phone that confusingly seems to be sold as the Moto G9 elsewhere in the world – and this was followed by the Moto G9 Power with its whopping 6,000mAh battery.
The Plus brings size and a bit more processing grunt to the party. It’s a 6.81in handset, powered by the octa-core, 2.2GHz Qualcomm Snapdragon 730G and 4GB RAM. Along with a generous 128GB of internal storage, the phone keeps up with the Joneses with a quadruple-camera array made up of 64MP, 8MP (wide angle), 2MP (macro) and 2MP (depth) sensors. 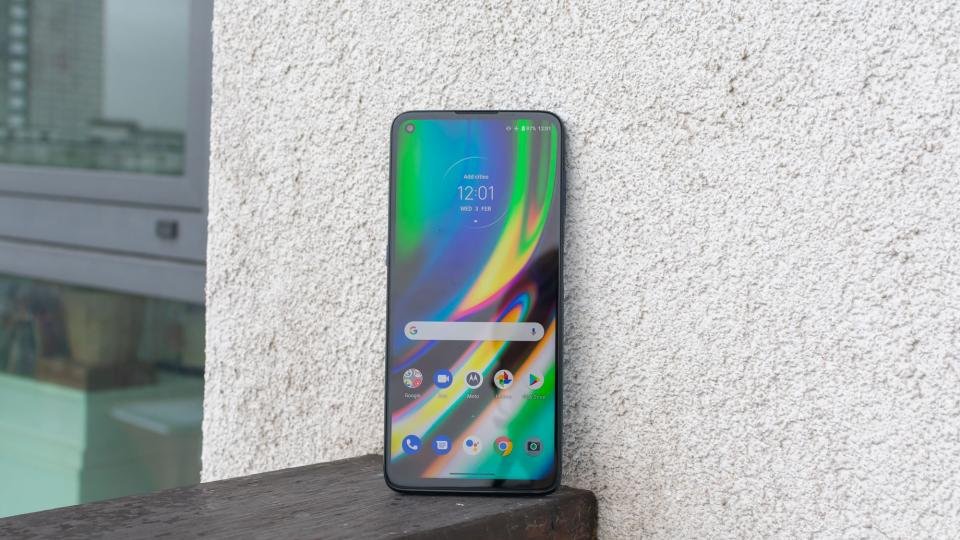 While the Moto G9 Plus launched at £260, it didn’t stay there for very long, and can now be had for around the £200 mark, which is a very competitive price. In fact, this price reduction means that it’s a substantial upgrade on both the Moto G9 Power (£180) and Moto G9 Play (£160) for not that much more cash.
Then there’s a trio of Chinese phones worth considering. The Realme 7 is a nice little performer at £169, as is the recently released Xiaomi Redmi Note 9T at £230. The real handset to beat, however, is the Xiaomi Poco X3 which performs significantly better than its rivals and packs a 120Hz screen for under £200.

The first thing you’ll notice about the Moto G9 Plus is that it lives up to the ‘Plus’ part of its name. At 6.81in across the diagonal and with a depth of 9.7mm, you certainly know that all 223g of it is in your hand at any given time. Some will find that kind of heft reassuring – others, probably a bit much.

Still, the phone’s screen makes up most of the space, with a bezel of around a millimetre thick all the way around, which doubles on the chin. Notches are avoided thanks to Motorola’s decision to combine the fingerprint reader with the side power button, and to embed the front-facing camera in a pinhole in the top left-hand corner. 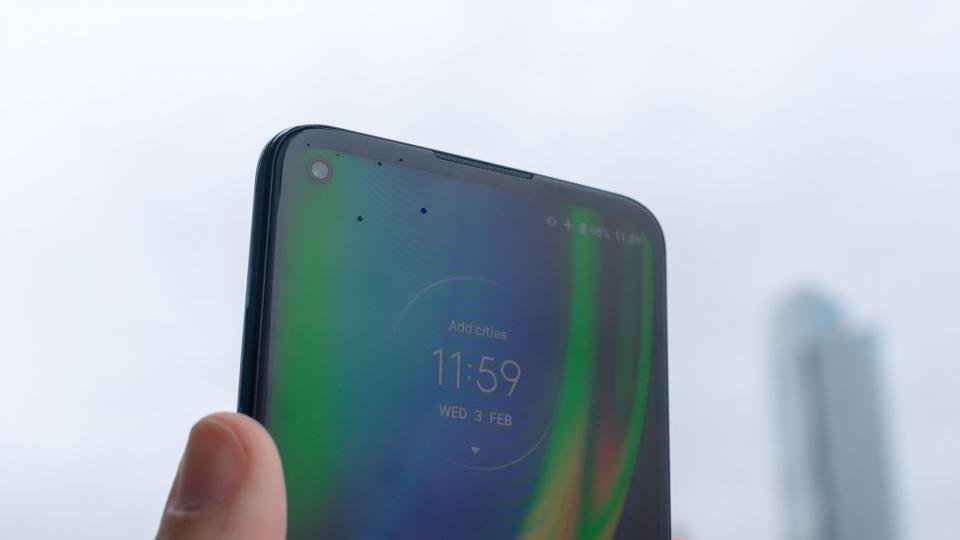 Flip it over, and it’s plastic all the way, though Motorola has gone for an extremely reflective metal look, which reminds me of the dazzling sheen of the HTC U11. In our case, this was a royal blue, but it’s also available in ‘blush gold’ if you like your phones on the shiny side. The glistening surface means that the Motorola ‘M’ logo is barely visible, but there’s no hiding the curved rectangle of the camera bump in the top left-hand corner, which houses four lenses and a flash.
There are a couple of extra design points worth highlighting, too. First off, the 3.5mm headphone jack is maintained. Secondly, the generous 128GB of internal storage can be topped up with an extra 512GB microSD card if you wish. Alternatively, you could put in a second SIM instead of the microSD card if you like – which will be handy when we’re allowed to go abroad again.

While both the cheaper Moto G9 phones have 720p screens, the Moto G9 Plus gets the Full HD+ treatment, with a resolution of 1,080 x 2,400. That, combined with the massive 6.8in screen, gives you around 386 pixels per inch.
It’s not just the resolution where the Moto G9 Plus is improved, though. It gets marginally brighter (466cd/m2 against 377cd/m2 and 425cd/m2 on the Play and Power) and also comes with far better colour accuracy. 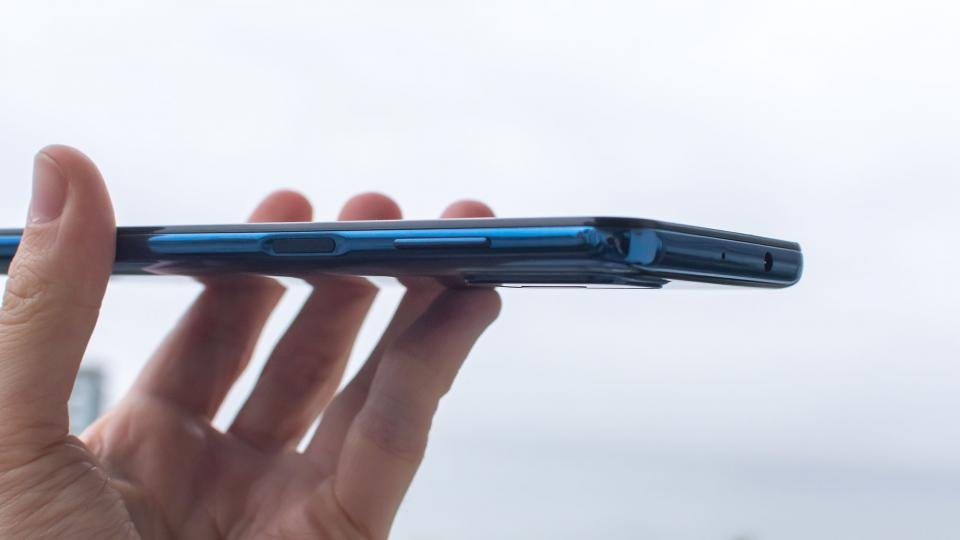 The Moto G9 Plus covers 93.6% of the sRGB spectrum from a colour gamut volume of 94.8%, making this a very fine screen indeed, and a marked improvement on the cheaper variants – even if it offers weaker contrast (just 1,244:1 compared to the others which managed around 2,000:1). Basically, this screen is up there with the best this price bracket has to offer.

The Motorola Moto G9 Plus packs an octa-core, 2.2GHz Qualcomm Snapdragon 730G, which is the same chipset inside the Google Pixel 4a (which costs £150 more). This is backed by 4GB of RAM and 128GB of storage.
In day to day use, that means you’re getting a phone that feels perfectly snappy and should be absolutely fine for most people’s needs. But it also means that it’s keeping pace with phones that cost a bit more, while giving it a little boost on the rest of the Moto G9 family.

It’s essentially the same story with graphical performance, where the Moto G9 Plus goes toe to toe with all its rivals, closing in on the superb performance of the Xiaomi Poco X3. Don’t be fooled by the red bars for the Moto G9 Power and Play, by the way – they’re close because the on-screen resolution is lower, and the fainter orange bar gives you a better measure of overall grunt. (The Xiaomi Redmi Note 9T is omitted here, as we couldn’t get GFXBench to install on it – we would assume similar performance to the Moto G9 Plus, however.)

Battery life is certainly above average as the chart below shows, but as you might expect it’s not quite as impressive as the phenomenal stamina of the Moto G9 Power with its extra 1,000mAh of battery capacity and lower resolution screen.

That said, Motorola claims that the bundled Turbo Charger will give you an extra 12 hours’ battery life with under ten minutes of charging. I did a test of this claim, and found that with ten minutes at the plug socket, the phone did indeed jump from 68% battery to 84%, which is undoubtedly impressive stuff – though whether an extra 16% battery equates to 12 hours’ usage clearly depends on what you want your phone to do in that time.

As is fashionable now (though a bit ridiculous if you stop and think about it), the Motorola Moto G9 Plus comes with four cameras on the back. That’s a 64MP (f/1.8) main camera, supported by an 8MP (f/2.2) ultra-wide lens and two 2MP (f/2.2) sensors: one for depth and another for up-close-and-personal macro photography. 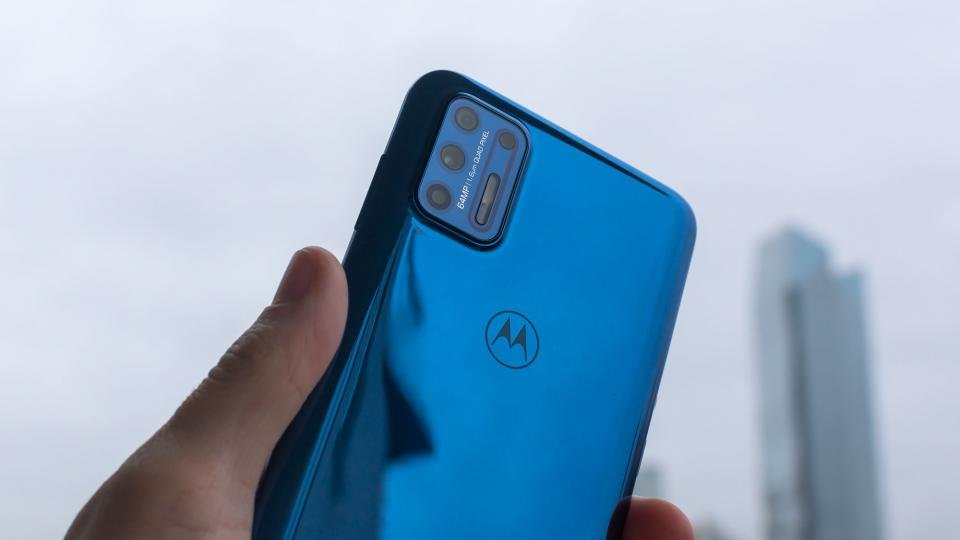 While I’m not convinced that many people will get much use out of the majority of these, I can at least report that the 64MP main camera is very good for the price. Check out the moody looking photo of the church near my house below, and you’ll see a really detailed shot, accurately reproduced with a nice colour balance.

Zoom in closer, and you realise quite what a bang-up job Motorola has done here. Even at high magnification, you can see individual tiles on the roof of the building with no blurring. Impressive stuff.

This was taken with the Moto G9 Plus’ default camera settings, which captures 16.MP images via a process called pixel binning. You can turn things up to a full 64MP shot if you like, but I personally wouldn’t bother. For me the difference is marginal, other than the fact that the shots take up around three times as much internal storage space at the higher setting.
Before shipping me the phone, Mobile Technology Editor Nathan Spendelow was able to compare the camera to the recently released Xiaomi Redmi Note 9T. Here are the results, zoomed in:

The Moto G9 Plus not only has more detail, but the colours are less murky – though I should emphasise that both are excellent images for £200 handsets.

Of course, most phone cameras can cope with bright conditions – even if this is a particularly good example – but the real test is low-light photography, where dark conditions often lead to an abundance of visual noise and pesky artifacts.

While the Moto G9 Plus isn’t completely immune to this phenomenon, it makes a good fist of it, as you can see from the sunset picture of my garden above. Zoomed in below, you’ll see a little detail lost but, again, this is very good for the price.

The front-facing camera is a 16MP f/2.0 affair, and somewhat unusually beautification effects are turned off by default. I quickly realised why this was when I enabled them and saw my face replaced by a shiny thumb with eyes and a blurry beard. Judge for yourself: default is on the left, followed by automatic beautification in the middle and manual beautification with all the settings maxed out on the right.

In terms of video, on paper the Moto G9 Plus is rather well kitted out, capable of shooting 1080p footage at up to 60fps, or 4K at a more modest 30fps. Results are extremely good: often you find that raising the frame rate or resolution kills stablisation, resulting in unusable shaky footage, but here things stay stable even if you upgrade the image to 4K.

I have virtually nothing bad at all to say about the Motorola Moto G9 Plus. Unless you’re suspicious of big handsets or really love your beautified selfies, it’s really a phone with no drawbacks for the price.

In fact, I’d go further than that – at its current price of £200 it’s a stone-cold bargain. Let’s put that into perspective: the excellent Google Pixel 4a uses the same Qualcomm Snapdragon 730G chipset that Motorola has gone for, and that phone sells for £350.

But it’s not just speed: the Moto G9 Plus has a great screen, a superb camera and pretty damned impressive battery life. It really is the complete package for anyone that wants the best they can buy for around £200. Finally, the Poco X3 NFC has a worthy challenger.