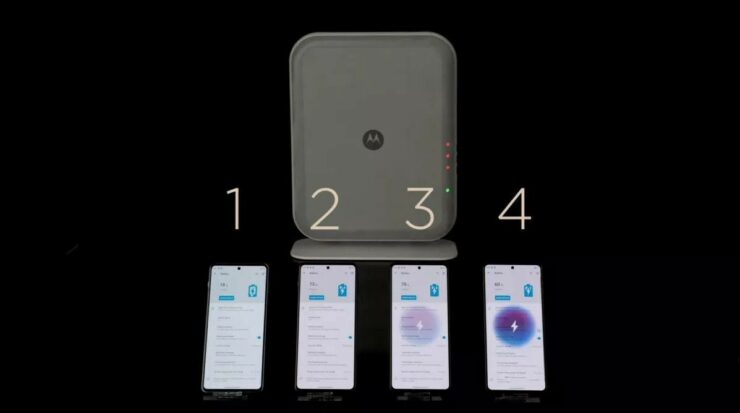 We are heading into the future, and while wireless charging has finally become normal, companies like Motorola and Xiaomi have something else on their mind. Xiaomi was the first to introduce over-the-air charging that would allow users to charge their devices over the air. Motorola was the second one to jump the bandwagon, and today, the company has finally spilled some more details about their Space Charging solution, and honestly, it is impressive.

Motorola device to post some information about the new Space Charging technology on their Weibo account. The company seems to have improved on the technology as the phone can charge up to 4 devices at once at a distance of up to 3 meters. The solution also brings a 100-degree area of coverage, according to Motorola. You can check out the official video below for a demonstration of the updated tech.

Motorola has also stated that the charging station comes with 1,600 antennas and can pass through the paper and other obstructions. The Space Charging station can also pause charging in specific areas when a human body is detected.

Currently, there is no word on maximum charging speeds, but a tip from Digital Chat Station reveals that it will top out at 5-watt speeds, which is not really good for phone shipping with 4,000 mAh and above batteries.

Whatever the case might be, slow speeds make sense if the phones will be charged in the same manner. This is a lot like wireless charging, where you just put your phone down and let it charge, but wireless chargers have become a lot faster. At the moment, a 5-watt charging speed makes sense for accessories like Bluetooth earbuds or smartwatches, but this might not be enough for smartphones.

Still, props to Motorola for doing something out of the box, and even though it will still take years for this technology to perfect, this does show a glimpse of where we are headed.