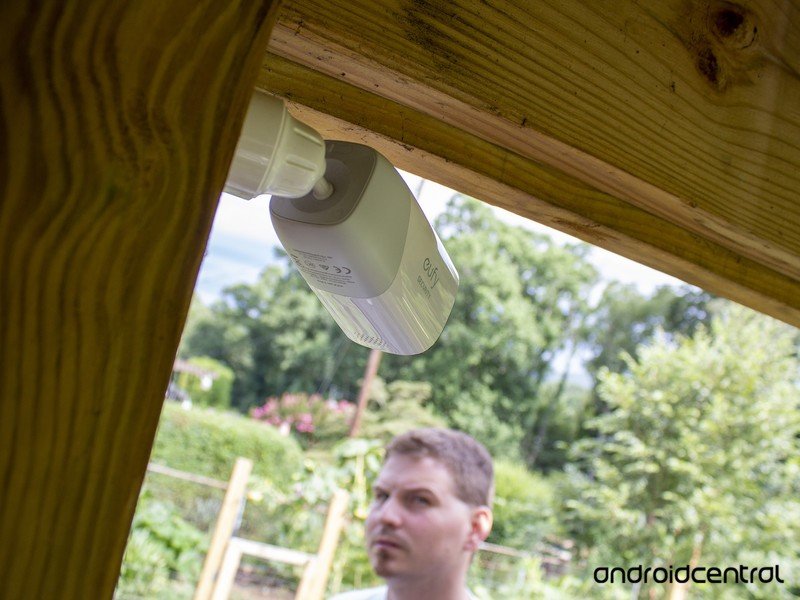 So you’re looking to pick up (or have already picked up) some of the best wireless home security cameras? That’s great! A wireless home security camera is one of the best ways to help secure your home, especially if it has 2-way audio support since you can hop on the respective app and tell those intruders to get off your lawn. But where exactly should you place one of these cameras, and what other factors should you consider? Wireless security cameras give homeowners and renters more options for mounting them since there’s no need to plug them into an outlet. Here’s a couple of ideas to help get it right.

Products used in this guide

Keep an eye on entryways 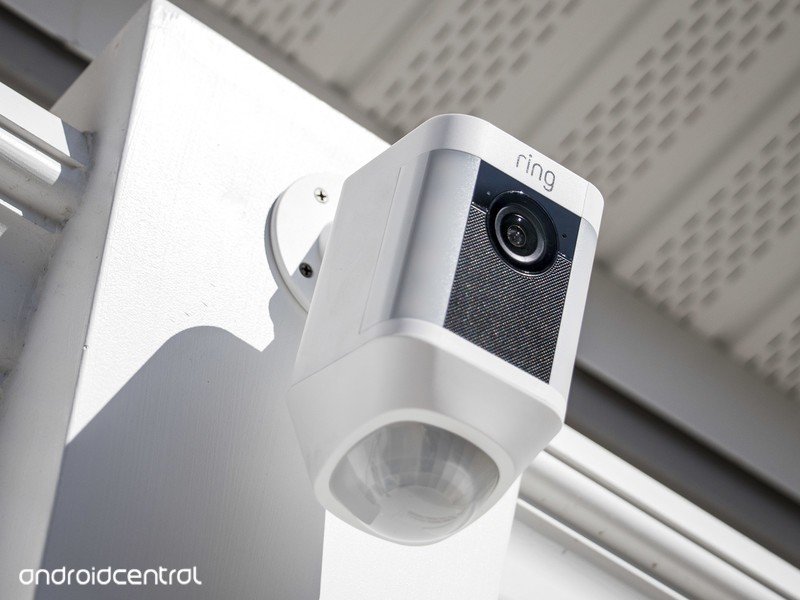 The most obvious place to mount security cameras are near the points of entry to your home. Whether this is a window or a door, it’s most important to ensure that any security camera can see the easiest place an intruder could attempt to enter your home. Normally-used areas, like the front door, are sure to be highest on the priority list since a passer-by or neighbors probably wouldn’t think much of someone calmy entering a front door.

Video doorbells like Nest Hello are perfect for this type of situation as they have the most optimal view of the front door and, typically, the entire front porch of a home. Nest Hello is a particularly impressive option as it has the ability to recognize faces — a functionality that requires a Nest Aware subscription — and notify you if an unknown visitor is at your door. 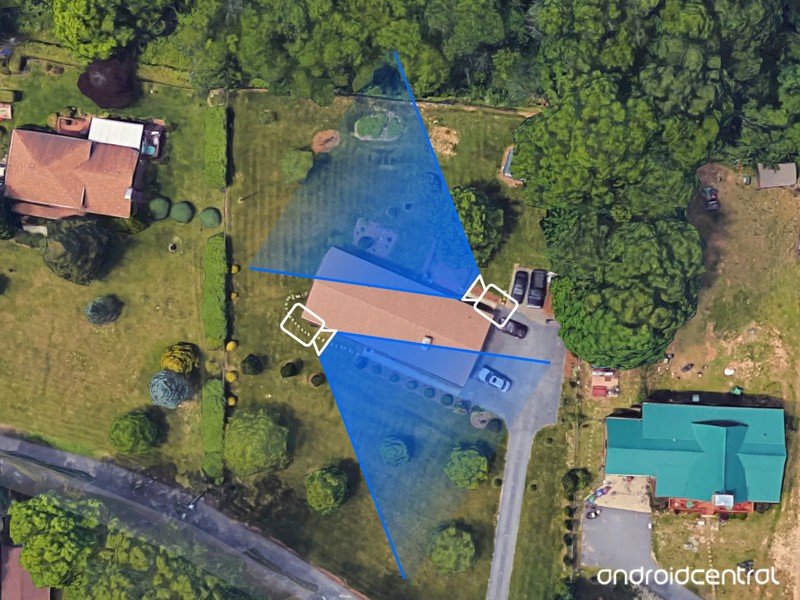 At the least, you should aim to cover two corners of your home to cover the front and back equally. In the example above, two cameras are placed on opposite corners of the house facing inward; one camera seeing part of the front yard and the walk-up to the front door of the house, while the other camera sees part of the backyard as well as the porch and rear entrance to the house. The idea is to make sure that, no matter where someone tries to enter, they’ll be walking in the viewing path of a camera.

Aside from the front door, the corners of your home are often excellent vantage points to catch anyone who shouldn’t be on your property. Cameras should be placed under the eaves of your home at the corners and pointed in a direction where it can see the entire length of the wall. This will cover any additional entryways along that wall, including windows or side doors. Try not to include too much of the house itself in the video, as you’ll primarily be concerned with people approaching your house rather than the house itself — although, it’s important to include at least part of the windows to use as proof of someone breaking in.

Identifying other areas of importance 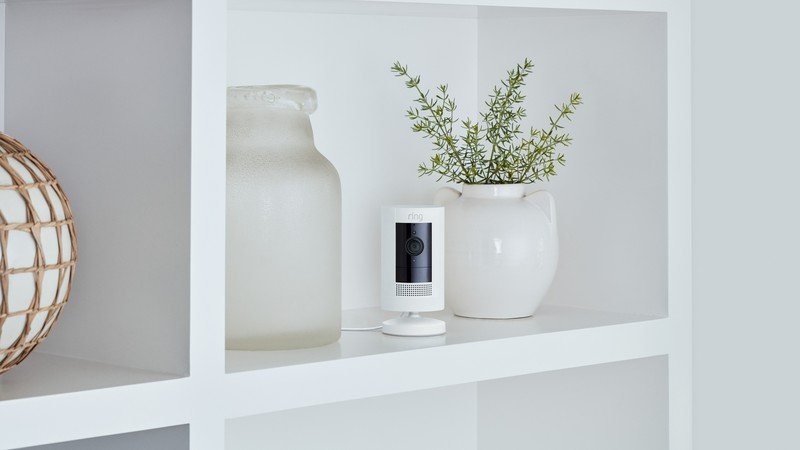 Indoor-rated cameras, like the Ring Stick Up Cam, can prove invaluable for helping to identify intruders or other unwanted guests. For these types of cameras, it’s best to point them toward any doors or easily accessible areas of your home to get a great shot of their entry. While outdoor cameras might get a good look at where the intruder came from and how they entered, an indoor camera will likely get the best view of their face.

Aside from covering your main dwelling, some folks also have a detached garage or shed where other valuables are stored. As is the case with your home, it’s important to make sure your cameras can see any entrances to a storage building. Placing a camera high under the eaves keeps it from being adversely affected by weather and, since it’s a wireless camera, keeps it out of reach of anyone trying to sabotage your surveillance system.

Always ensure that a camera can see the entrance as well as the area around it, giving the camera enough time to notify you of movement before someone can actually attempt to gain entrance to the building. Most wireless security cameras have two-way audio built right into the app, so don’t be afraid to let the person know they’re being watched and that the police are on their way! 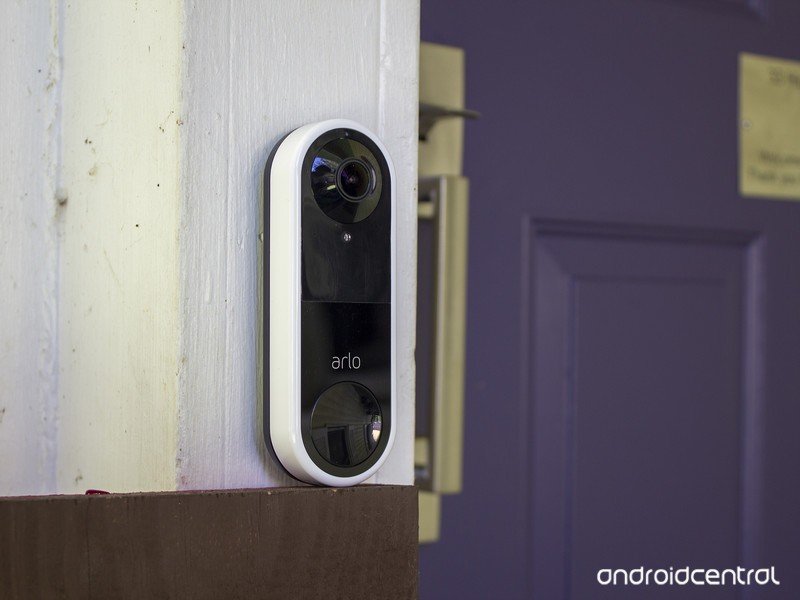 Motion alerts are the key to knowing when something might be awry at your home but, if they aren’t set up correctly, they could trigger too many false alerts and give you “boy who cried wolf” fatigue. Simply put, that means you end up ignoring motion notifications from your cameras instead of checking them. When setting up motion notifications, be sure to use motion zones to exclude areas where too much regular movement will trigger false notifications. 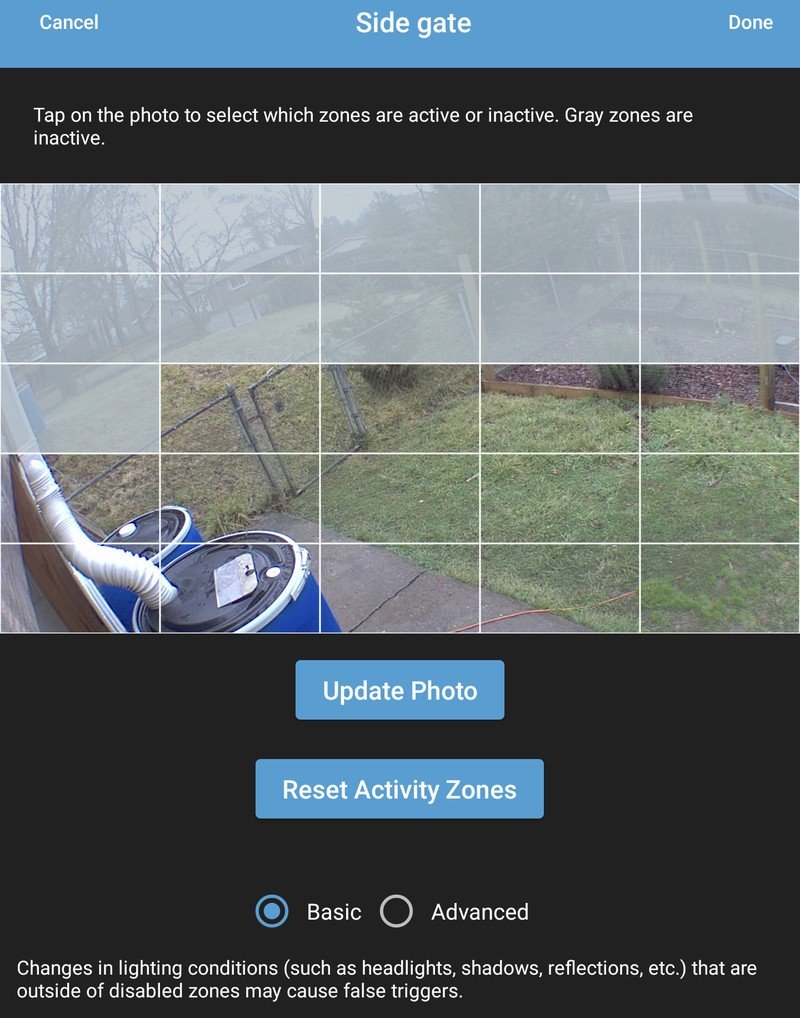 In this screenshot, for example, a Blink XT is being used to monitor the side gate to the backyard. The light gray squares have been excluded from motion alerts because they include traffic from the road as well as the movement created in areas where headlines often shine. You might also find that excluding foliage will help cut down on false notifications, as some plants wave quite a bit in the wind and will set off alerts.

Additionally, many cameras have AI-guided features like person identification, animal identification, and even package identification to help avoid false alerts. On cameras with these types of features, you may not even need to use motion zones because they can be set to send notifications only when one of these categories of objects is identified. Great examples of brands that can do this are Arlo cameras and video doorbells, and Nest cameras and video doorbells. Eufy offers person detection features without a subscription but doesn’t offer animal or package detection at all.

Be aware of weather limitations 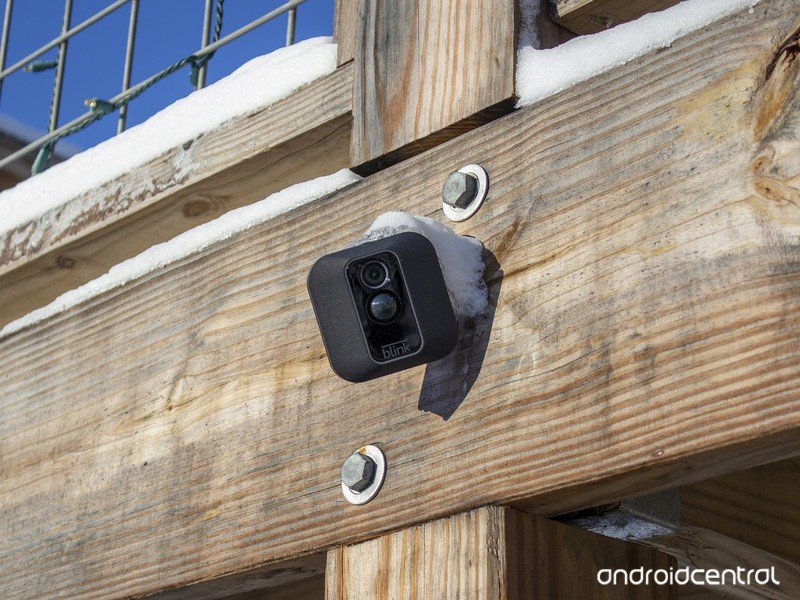 Not all wireless security cameras are created equal. Some can withstand direct sunlight in the Summer, while others are better equipped to handle pounding rain or endless snow. When comparing the Blink Outdoor vs. Ring Stick Up Cam, for instance, you’ll find that the Ring Stick up Cam can withstand one degree colder temperature and nine degrees hotter temperatures before shutting itself off automatically. Depending on where you live, that sort of difference could make or break the decision to choose any one company in particular.

In general, though, most manufacturers warn against placing cameras in a place that receives a lot of direct sunshine to keep the camera from getting too hot. If the Sun does end up warming your camera too much, it’ll end up shutting itself off to prevent damage and prove to be quite a useless security tool since it can’t see anything while off! If the best vantage point is in direct sunlight for hours, consider crafting or purchasing an overhang to keep your camera in its best working order.

I prefer to stick to the eaves of my house for proper shade, as well as underneath my deck in the backyard. Both of these places keep the camera from being directly rained or snowed on, as well as give it enough shade to stay cool on the hottest of days.

Keep track of your pets (or livestock) 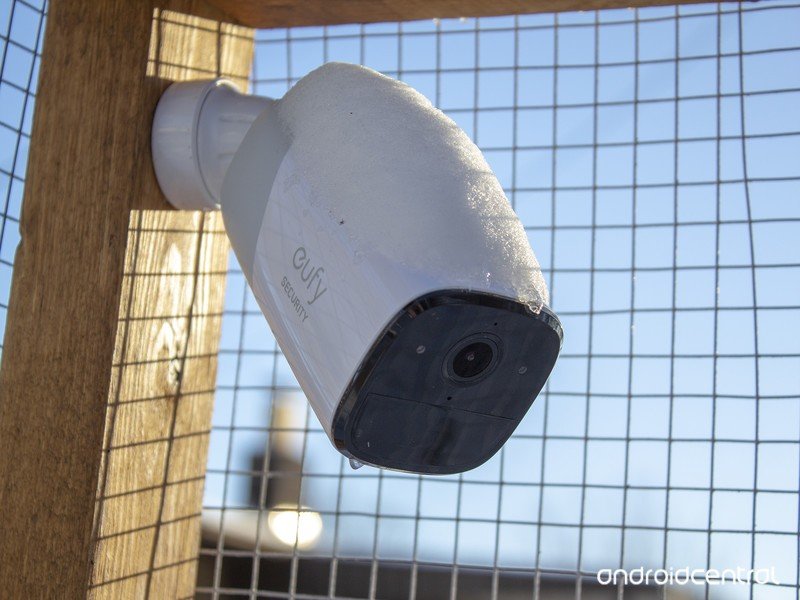 One of my favorite uses of a wireless security camera isn’t for securing my home or my belongings; it’s for making sure my outdoor animals are safe. Everything eats chicken, which makes me a rather nervous chicken daddy during the twilight hours or bear season, in particular. That’s why I have two different cameras set up in my chicken coop and in the chicken run. In the run, I’m using a EufyCam 2 Pro because of its ultra-wide-angle lens that can see everything from the corner of the structure.

Inside of the coop, I’ve placed a EufyCam 2C near the bottom because of its ability to shine a light on the situation thanks to the built-in LED spotlight. Normally, I just use the camera’s infrared vision to keep an eye on the chickens at night but, if a predator were to get in and set off the motion alerts, it can automatically shine that light on them and frighten them away. The ability to set motion zones without having a subscription is one of the things I love about EufyCams. 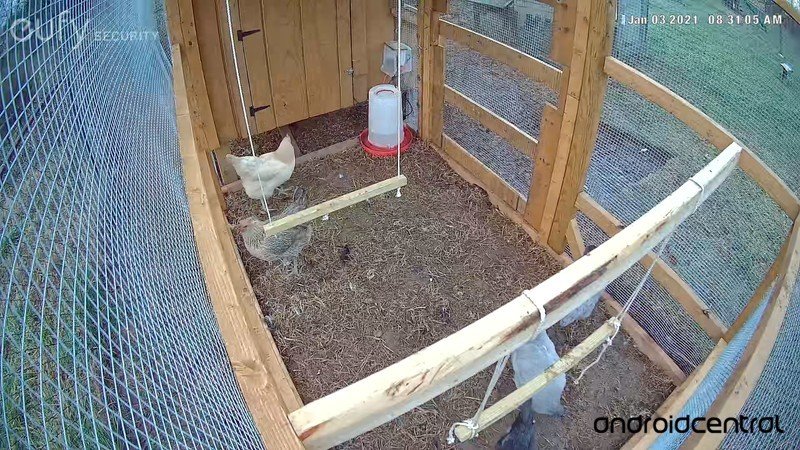 Also on the inside of the coop, situated much higher, I’ve got a Blink XT2. Why two cameras? Aside from the vertical space that’s impossible for one camera to see, I like the Blink XT2 — and, by proxy, the newer Blink Outdoor — because of the built-in thermometer that’s easily accessible from the Blink app. This tells me if it gets too cold in the coop on those mid-Winter days and if I need to turn the chicken’s heater up a notch or two.

Now, in many cases, it might not make sense to use motion alerts on these cameras. I only use motion alerts on the coop’s lower camera and have restricted motion detection to the areas where the window and door are located. The idea here is to catch a predator in the act of invasion, just as you might place a camera to view a window or door of your home. It also might make more sense to restrict movement detection for certain times of the day — since chickens are diurnal creatures, I know nothing should be scampering around in the chicken run at night!

No matter which of these great cameras you pick up, you’ll be helping to secure your home for the future and give you something that you probably didn’t have before: peace of mind.

ID the folks you see

Smarter than your average doorbell.

Google’s AI-driven Nest Hello Video Doorbell does more than just see; it actually identifies who and what it’s seeing for more accurate notifications.

Goes where you need it to

Rated for inside and out.

Ring Stick Up Cam is the company’s most versatile camera, with a convenient stand for indoors and weatherproofing for outdoors. 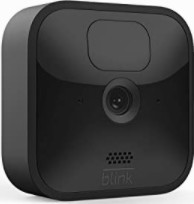 For those hard-to-reach places.

Blink Outdoor has an unbelievable 2-year battery life on 2-AA batteries, so you’ll rarely have to recharge it. 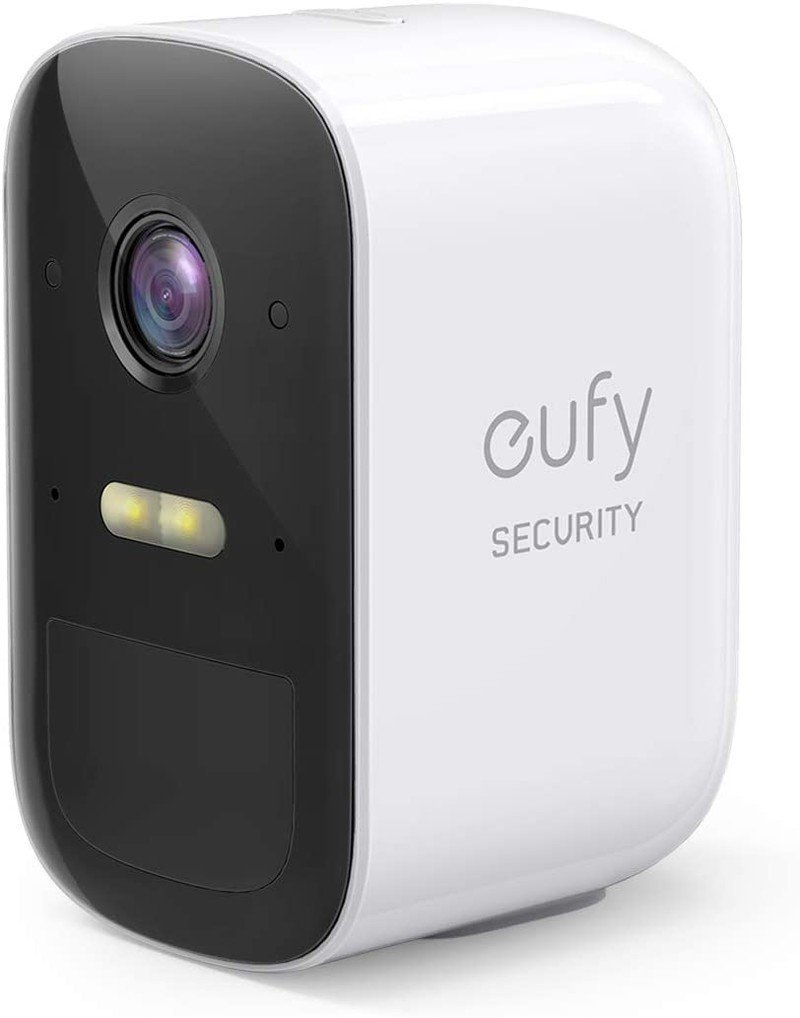 Great video without the subscription 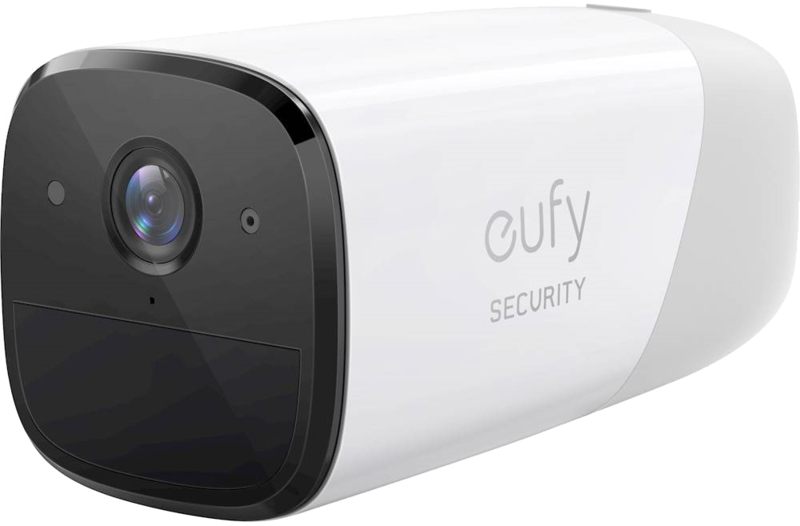 And no need for a subscription, either!