We have tested the MSI Spatium series from the M470 to the M450 – both offering price and performance geared towards the mainstream bracket. Now what we have here is the MSI Spatium M390 – a PCIe 3.0 SSD bordering in-between the lower and mainstream markets.

Disclosure: MSI sent the Spatium M390 for the purpose of this review. As usual, the company did not ask me to say anything particular about it.

The MSI Spatium M390 sports a simple color box similar to the SSDs that came before it. 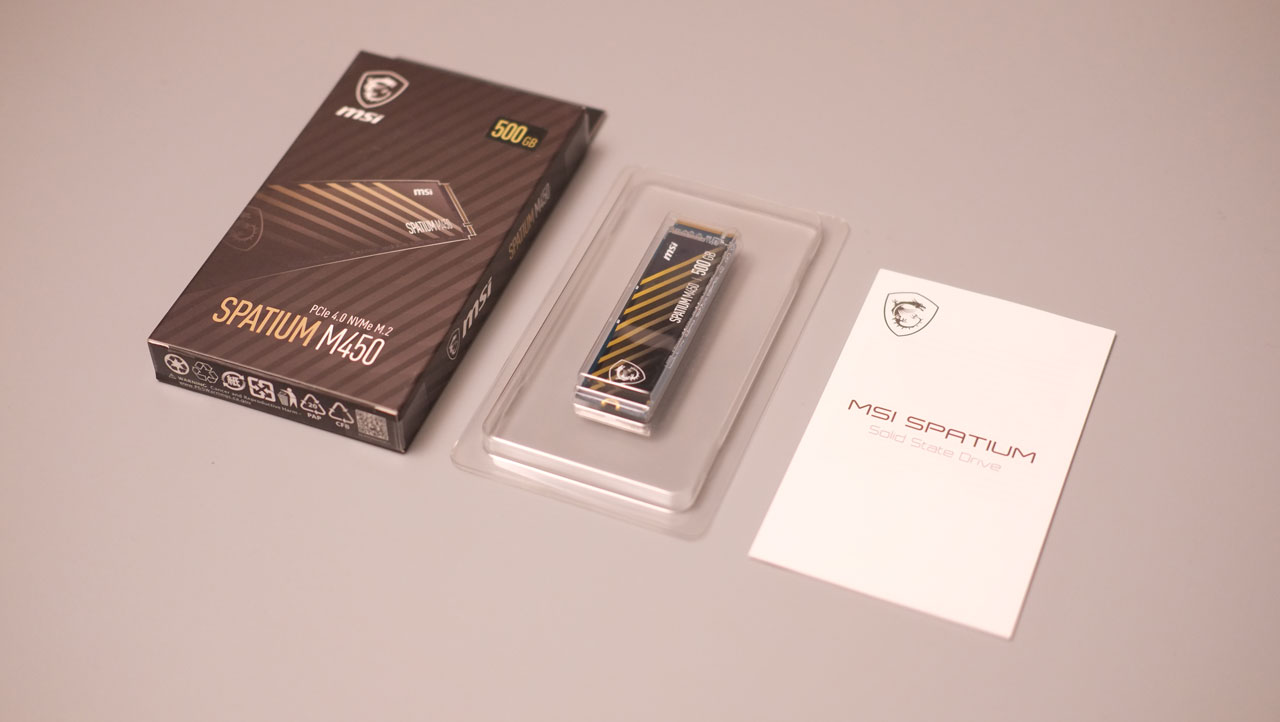 The packaging comes with the following items inside:

Nothing really changed here compared to the previous Spatium products.

The Spatium M390 isn’t much different compared to rest of the line-up. It is still a 2280 format M.2 NVMe SSD with a styling and PCB color similar to the M450. 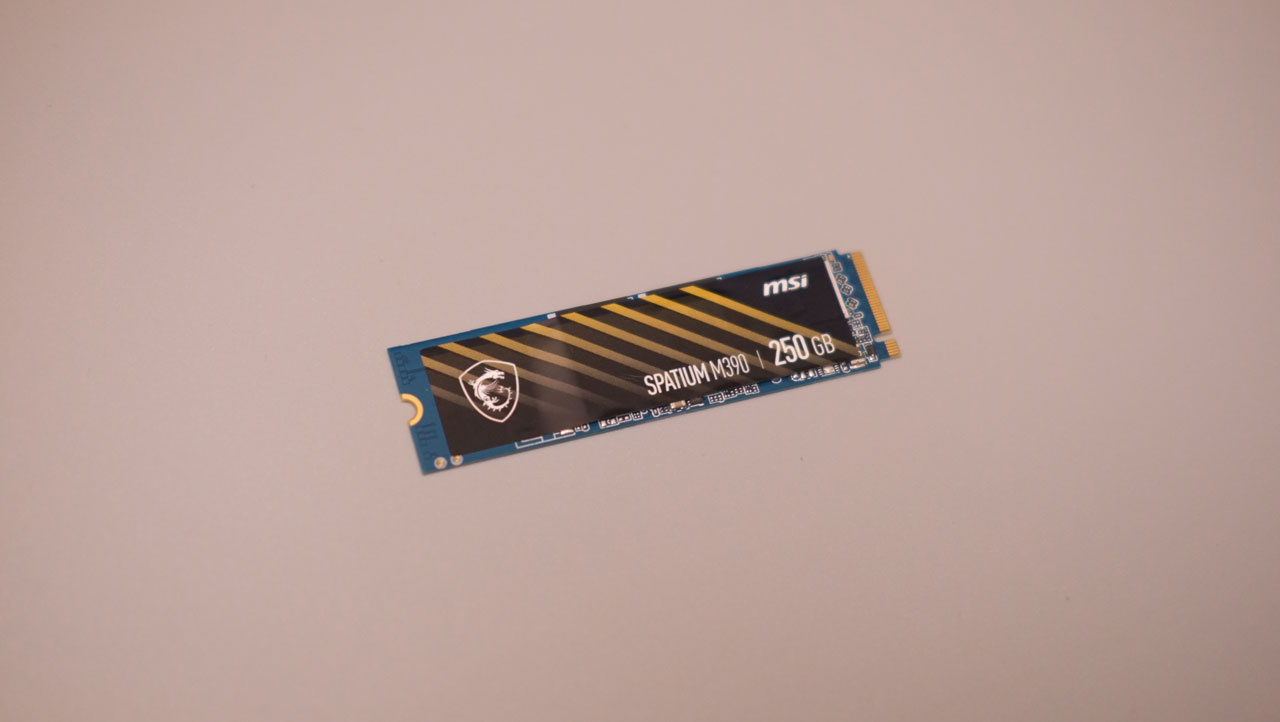 The Spatium M390 250 GB comes with a single sided module design. This should fit some really confined M.2 2280 slots such as those found on notebooks and other similar devices. Looks really similar to the Spatium M450 down to the PCB layout. 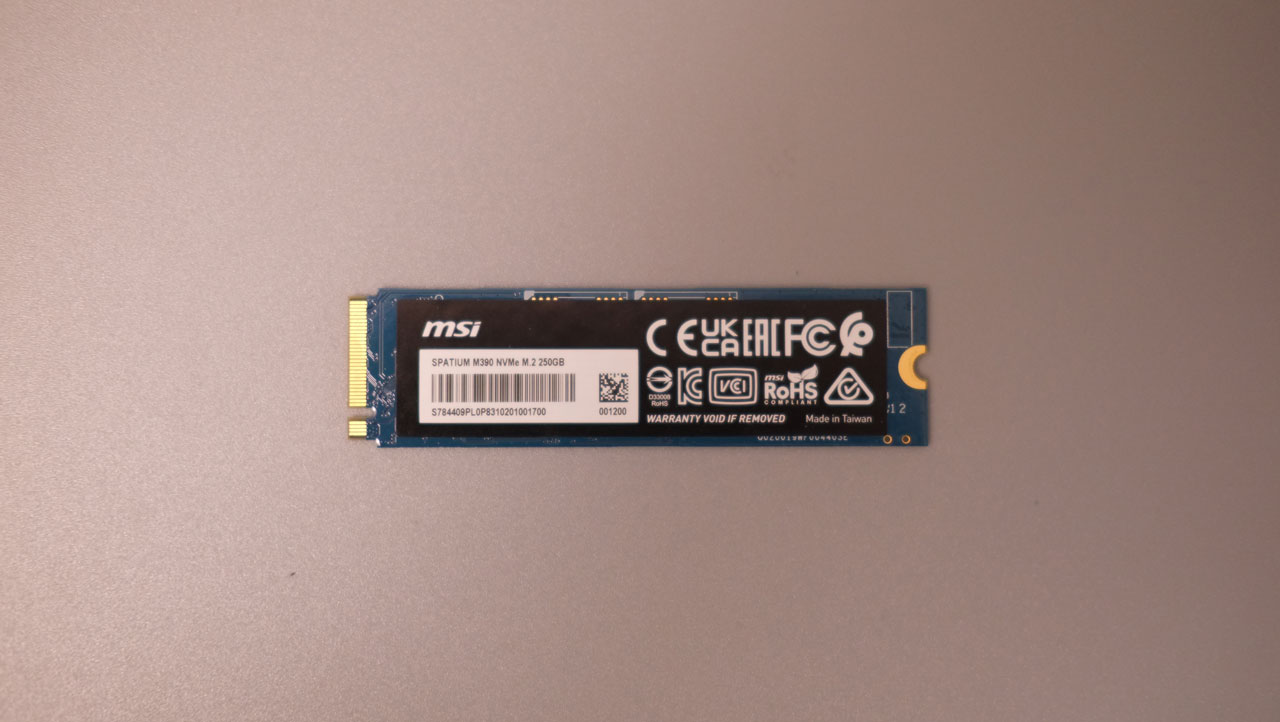 Nothing major to complain here. Let us move on to the measurements.

Our test setup relies on the measurements taken from industry standard benchmark tools and real-world applications. It is important to note that we are testing the review sample after burn-in, with at least 24-hours of uptime. This is done so to negate the FOTB (fresh out the box) state of the DUT (device under test), yielding better benchmarking consistency.

The DUT is tested with the following configuration from our test system:

Note: I tested this device with what MSI supplied but for the sake of fair comparison with the rest of the benchmarked storage devices, I retested the drive using my standard test system.

Throughput is measured in Megabytes per second (MB/s) at read and write. This is done via Crystal Disk Mark and its sequential benchmark. 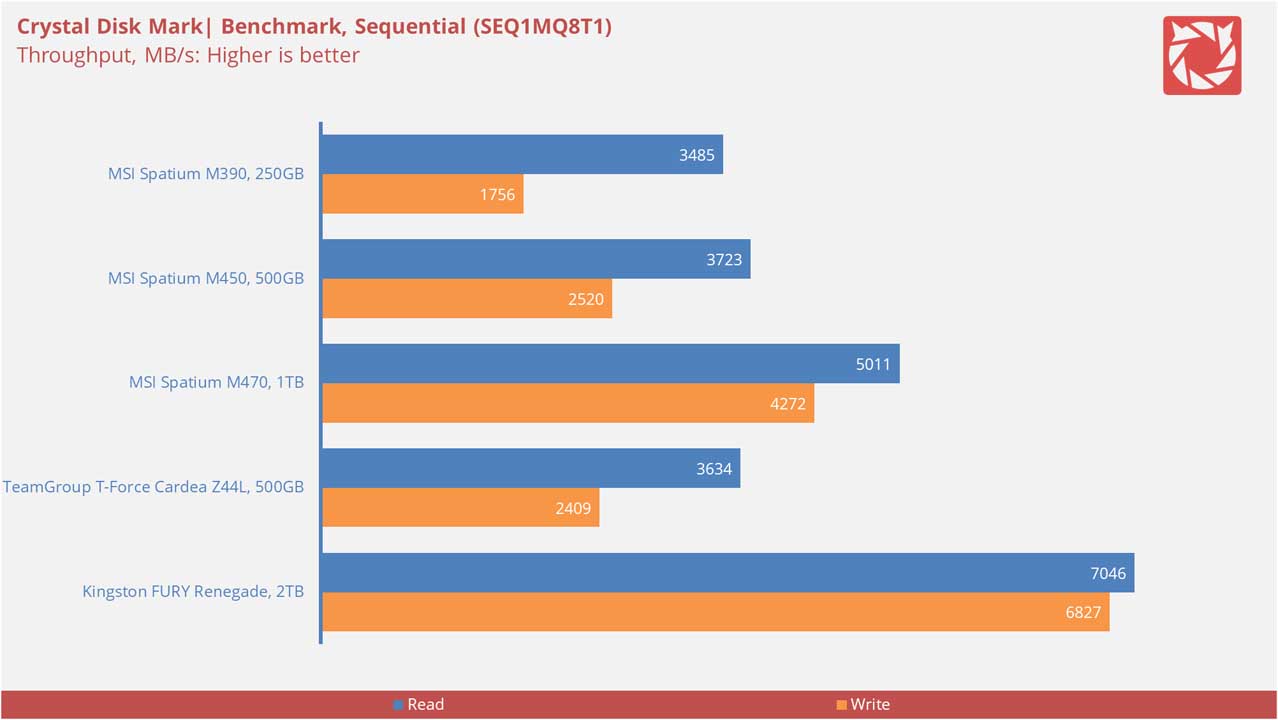 Throughput is measured in Megabytes per second (MB/s) at read and write. This is done via AS SSD and its sequential benchmark. 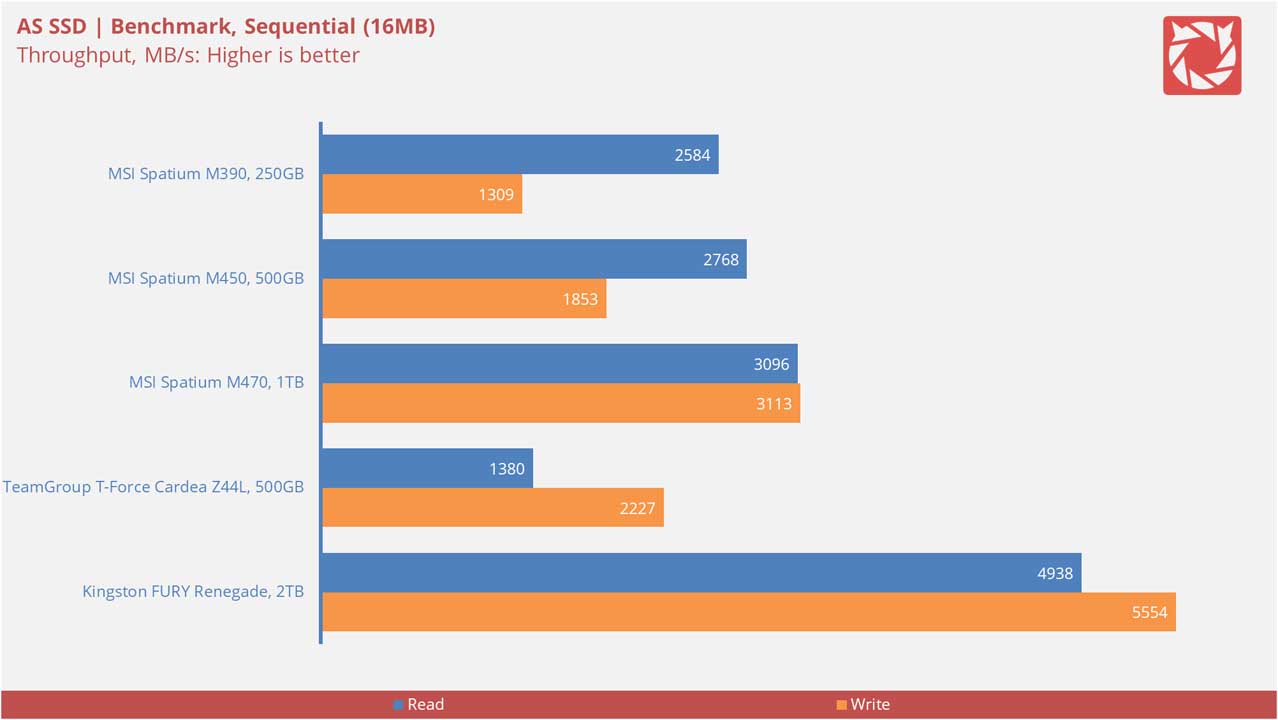 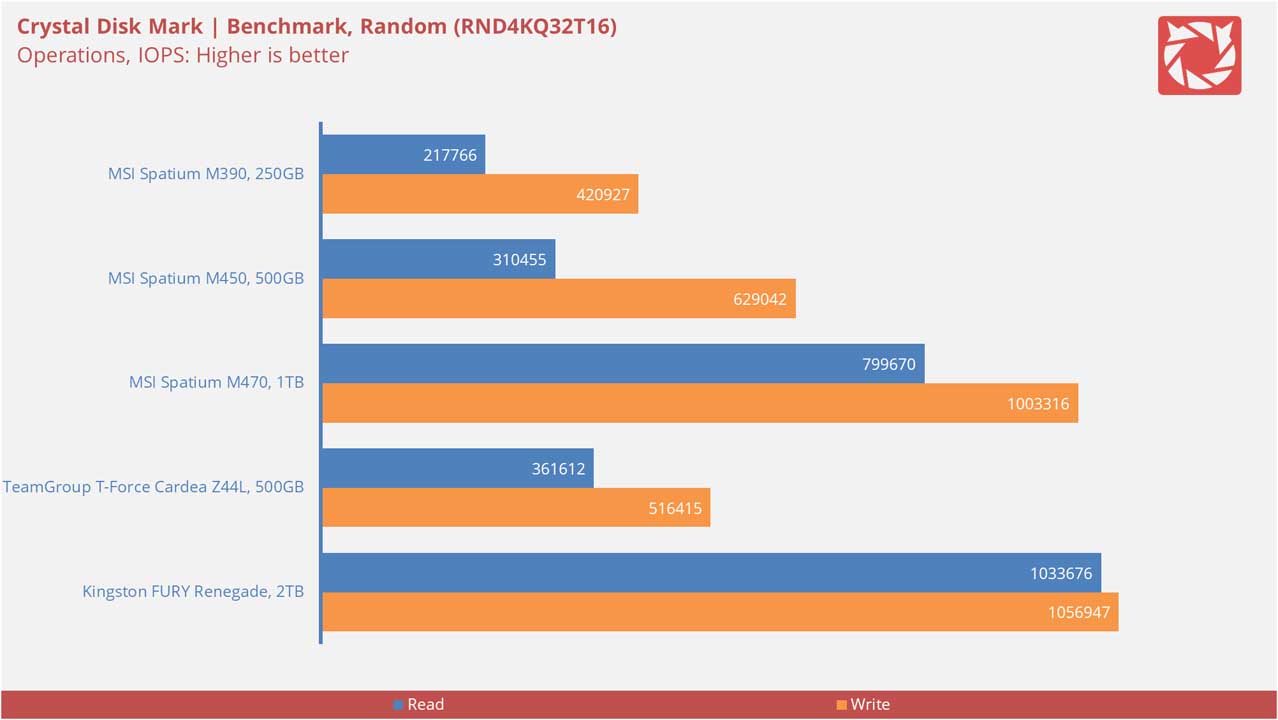 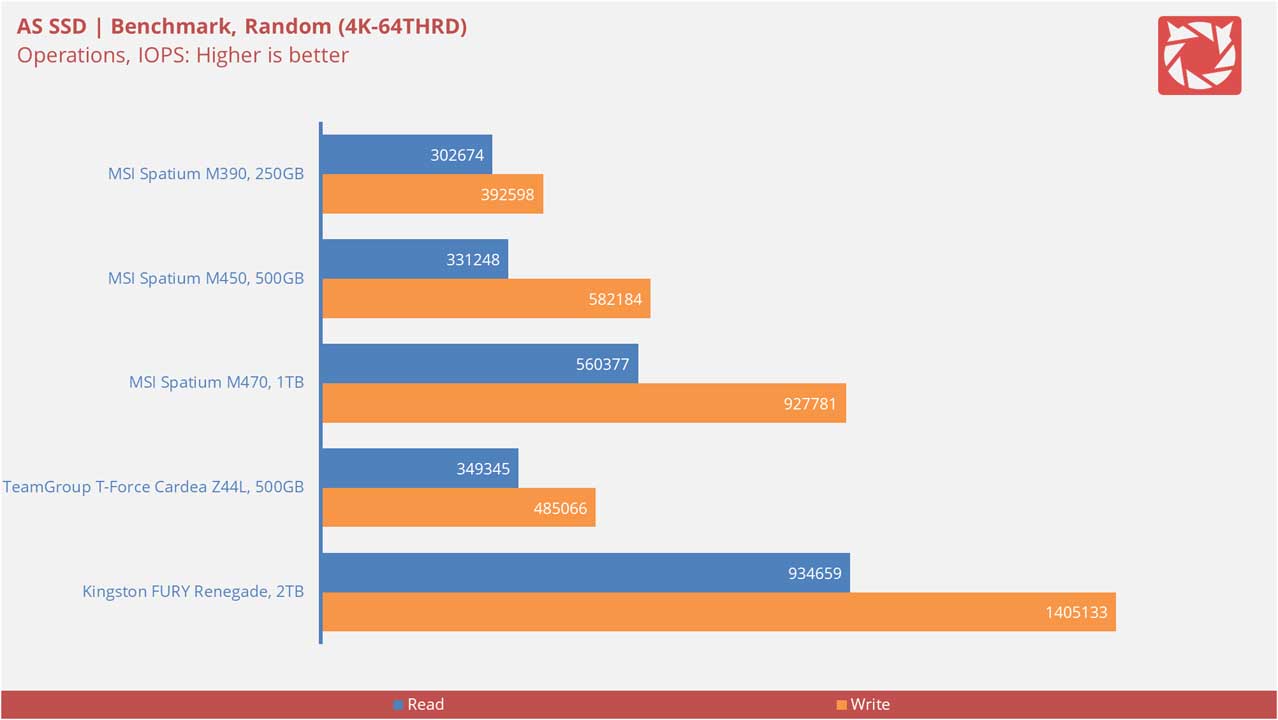 Access time is measured in Milliseconds (ms). This is done via AS SSD and its Access Time benchmark. 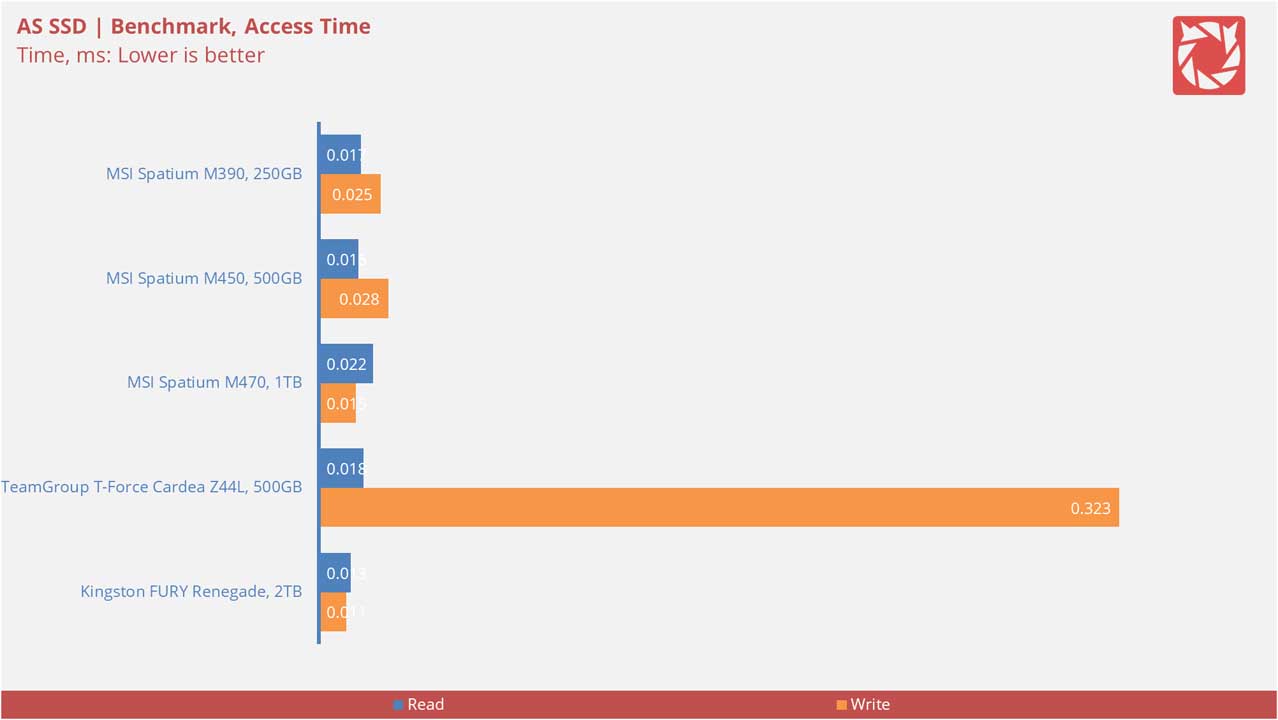 Loading time is measured in Seconds (s). This is done via Final Fantasy XIV: Endwalker and its official benchmark. 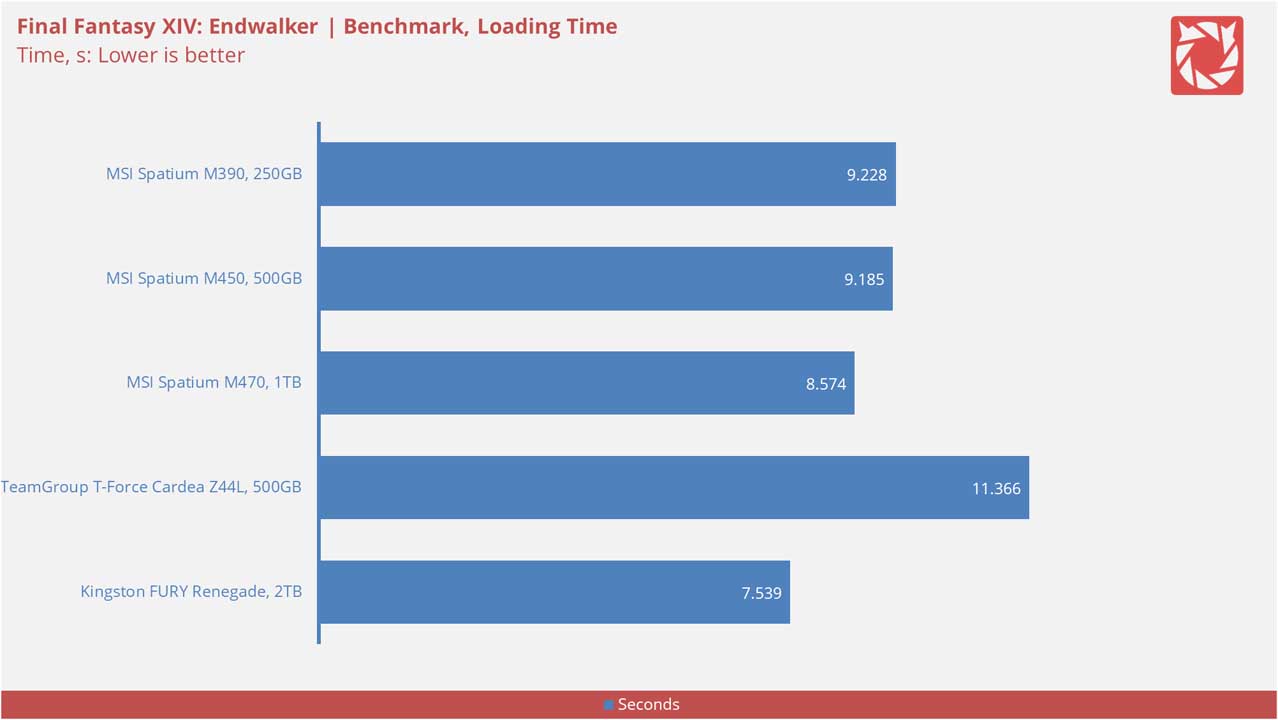 Proper performance we got here from the Spatium M390. Actually impressive considering its price.

File copy performance is measured in Seconds (s). This is done via AS SSD and its File Copy benchmark. 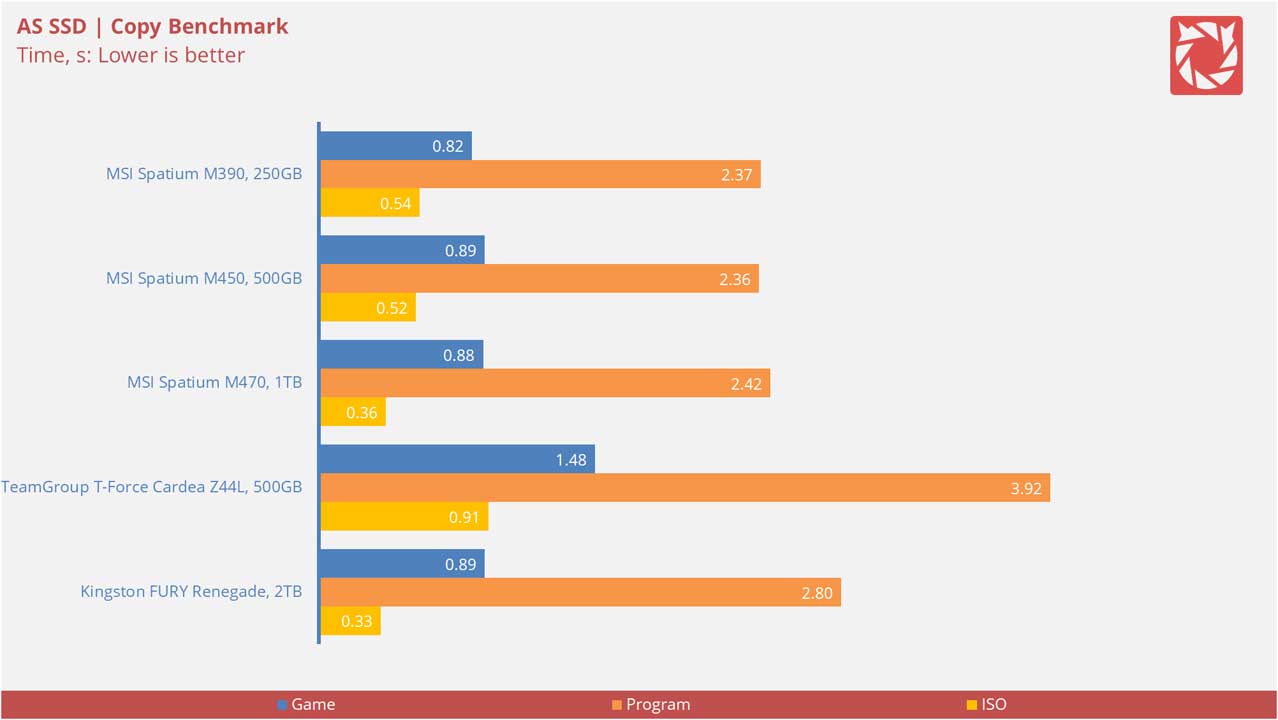 File copy performance is measured in Seconds (s). This is done via TeraCopy and 16 GB worth of files. 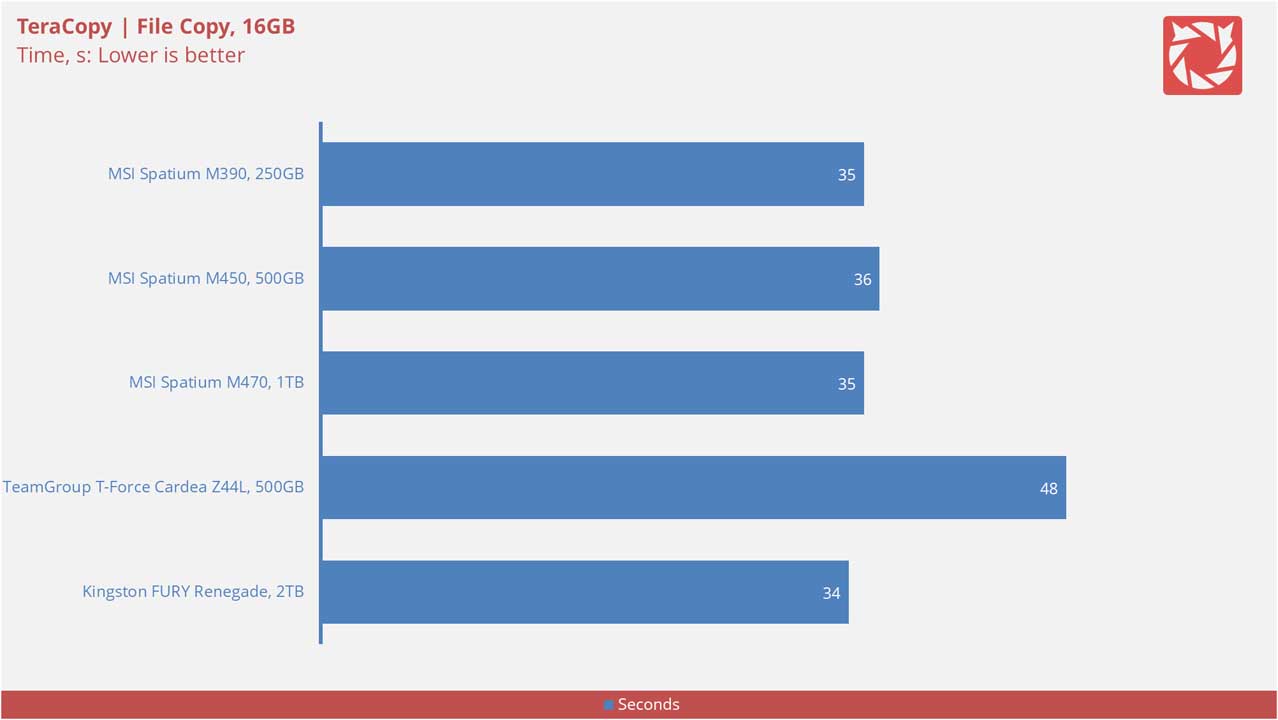 File copy performance is excellent – as is with the higher end models of the Spatium series.

Temperature is measured in degree Celcius (ºC) at system idle and load. This is done via AIDA64 Extreme and its System Stability Test. 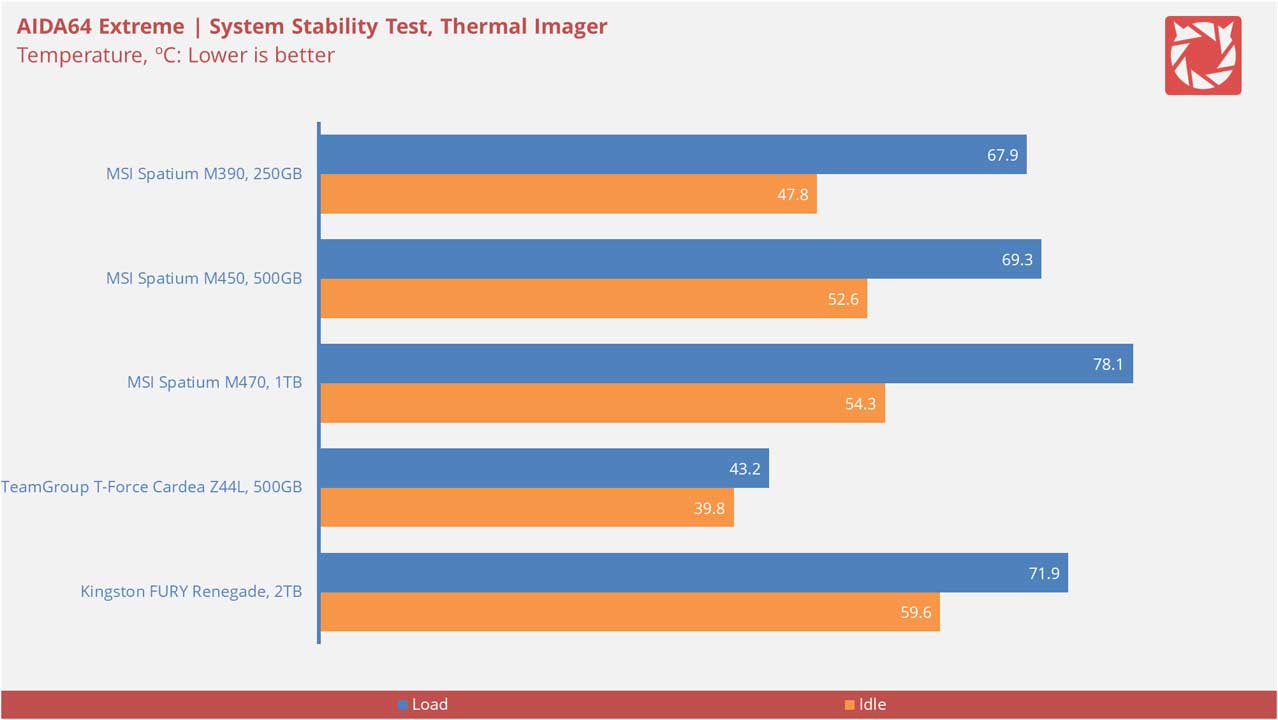 Thermal performance is actually the best among its peers. No surprise here but it could still do better at load.

Aside from its innate TRIM, SMART and MSI Command Center support – the M390 comes with a 5 year warranty. Same with the rest but it comes with lower TBW at 150 TB. Warranty will lapse once the drive went past it regardless of age. 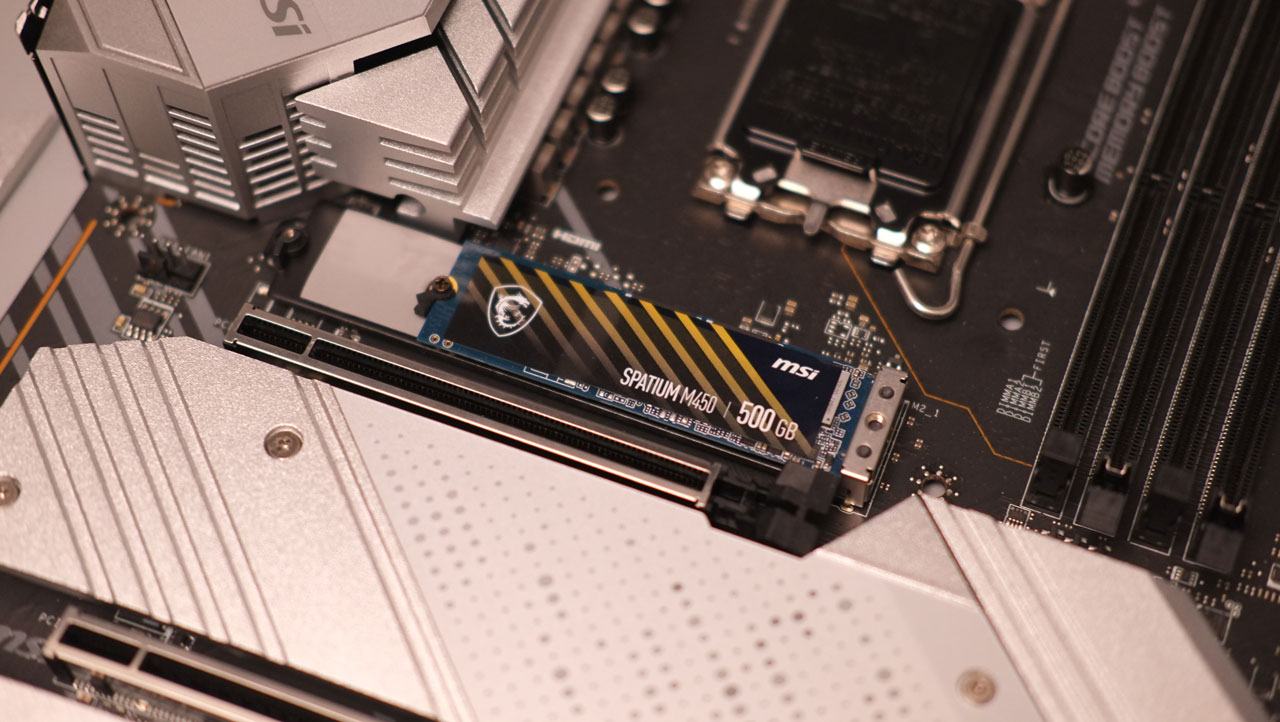 While I think a heatsink is not required for the majority of desktop setups with enough airflow to keep the heat at bay, the M390 could still use some for peace of mind.

The Spatium M390 ends our adventure with MSI’s solid state storage devices – at least for this quarter. That said, I felt like we touched the most important product segments for the budget conscious individuals looking for capable M.2 SSDs for their builds.

Performance wise, the M390 did well on most tests. Most, since load temperature is still high compared to lets say the T-Force Cardea Z44L. This requires you to invest on a cooler or have a motherboard with proper M.2 cooling solution already waiting to get used.

In closing, the MSI M390 might not be a trail blazer with its PCIe 3.0 interface but it is no slouch either. With a price point of ₱2,290 PHP, this is an excellent introduction to the world of NVMe SSDs – without breaking the bank.

In closing, the MSI M390 might not be a trail blazer with its PCIe 3.0 interface but it is no slouch either. With a price point of ₱2,290 PHP, this is an excellent introduction to the world of NVMe SSDs – without breaking the bank.