Alongside the arrival of Intel’s 10th Generation processors, motherboard developers like MSI have launched more than 40 new Z490 motherboards to accompany the new CPUs. Among these, there are some important improvements over previous Z390 motherboards. These include greater capacity CPU power delivery systems, higher memory frequency support, and high-speed connectivity including 10GbE/2.5GbE LAN, Wi-Fi 6 and I/O like Thunderbolt 3 and USB 3.2 Gen 2×2 (20Gbps).

The Intel Core i9-10900K has 10 cores, which is two more than the Intel Core i9-9900K. In addition to this, the formal TDP has increased from 95W to 125W as well. This means that the i9-10900K draws more power, and thus could be a challenge for motherboard VRMs to handle. To satisfy the demand for overclocking, motherboard designers – ourselves included – have included more powerful VRMs on their Z490 motherboards.

VRM phases on these premium motherboards range from 12 to 16 phases, and some of them offer 90A MOSFETs as well, such as our MEG series of motherboards: Z490 GODLIKE, Z490 ACE and Z490 Unify. All of them feature 16 phases of power delivery, and each of their MOSFETs are rated at 90A. If you’re looking for a motherboard that can handle overclocking the Intel Core i9-10900K, strong power delivery is definitely something you should prioritize. 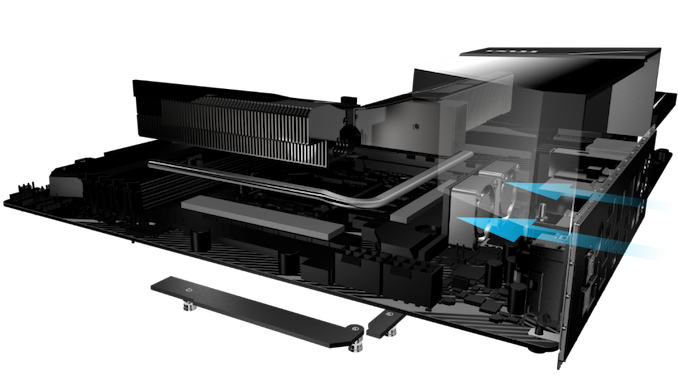 For these reasons, we suggest builders choose the motherboard with the best power delivery and the most effective active cooling systems.

Intel has introduced a new memory routing technology called “Tabbed Routing” to the Z490 platform. With this new circuit routing, cross talk noise is reduced, and as a result the signal is improved. Due to this, you can see a significant increase in memory frequency support on Z490 motherboards. It’s 200MHz-300MHz higher on average compared to older Z390 models, which is a big jump. Most Z490 motherboards support up to 4600MHz, and some can even handle 5000MHz. 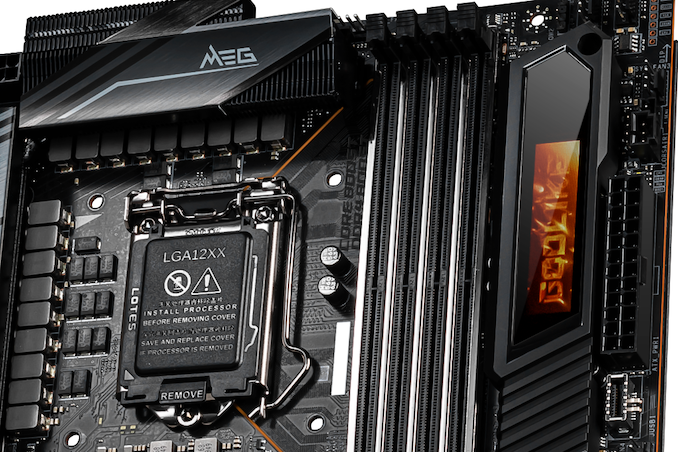 Since most PC enthusiasts are willing to pay for expensive high-frequency memory, we recommend choosing a motherboard that has top-notch memory support.

Most Z490 motherboards are PCIe Gen 4 ready, even though Intel 10th Gen CPUs and Z490 chipsets don’t support PCIe Gen 4. These motherboards have implemented PCIe Gen 4-capable circuits and components, meaning that they’ll be ready for use with future generation Intel CPUs with this technology, allowing these boards to enjoy the benefits of Gen 4 graphics cards and faster PCIe Gen 4 M.2 SSDs. 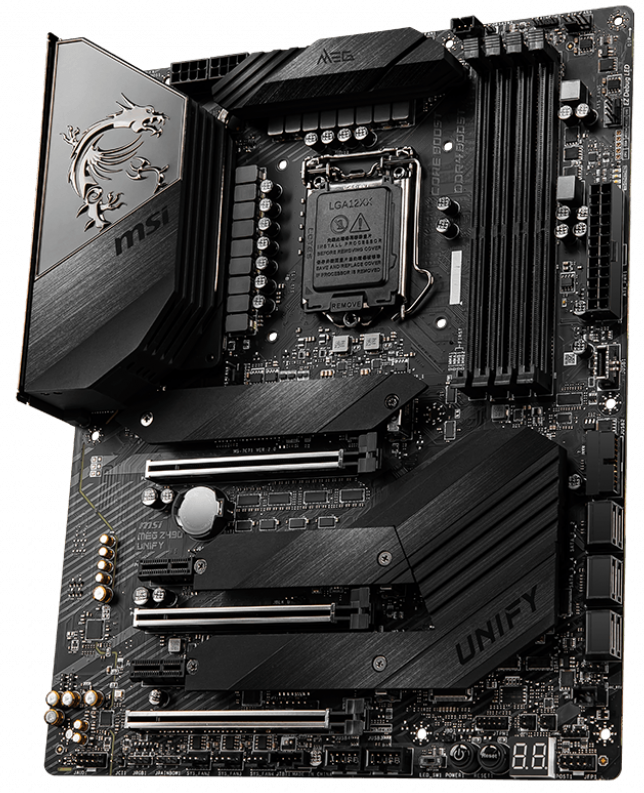 Our Z490 motherboards, as well as those from Gigabyte and ASRock, are all designed to be PCIe Gen 4-ready. ASUS didn’t mention much about this, but so far, the evidence shows that only some of ASUS’s Z490 models will support PCIe Gen 4.

If you plan to upgrade your CPU in the future, why not get a motherboard that will be prepared for the arrival of PCIe Gen 4?

Another improvement that comes with Z490 motherboard models is faster networking speeds. Most high-end and mainstream Z490 motherboards are equipped with 2.5GbE LAN, and some flagship models even up to 10GbE LAN.

However, at the budget level, not all motherboards have 2.5GbE LAN. For our Z490 board lineup, we’re offering at least 2.5GbE LAN for all of our boards. In addition to 2.5GbE LAN, Wi-Fi 6 support is now considered a standard for Z490 motherboards.

For I/O, some high-end motherboards feature support for Thunderbolt 3 and USB 3.2 Gen 2×2 (20Gbps). MSI, Gigabyte, and ASRock all provide Thunderbolt 3 ports; however, ASUS only provides Thunderbolt 3 support with its flagship model.

As frontal Type-C ports are becoming more popular on PC rigs, more and more motherboards are offering front Type-C headers. Among Z490 motherboard vendors, we’re the only one that offers a frontal Type-C connection on all of its Z490 models. It’s something where we’re proud to take the initiative.

Choosing a Premium Motherboard for Your Build

For consumers building an elite system, there’s no such thing as budget. They just want the best. If you’re in this camp, then we recommend picking the motherboard that has the best collection of specifications and features.

Choosing the Most Powerful VRM and Active Thermal Solution

The Intel Core i9-10900K has 10 cores and 20 threads, so you need a powerful VRM in order to take full advantage of the power it can unleash. When it comes to VRM, more VRM phases and high-current MOSFETs are what matters the most for pushing the i9-10900K to its limits. 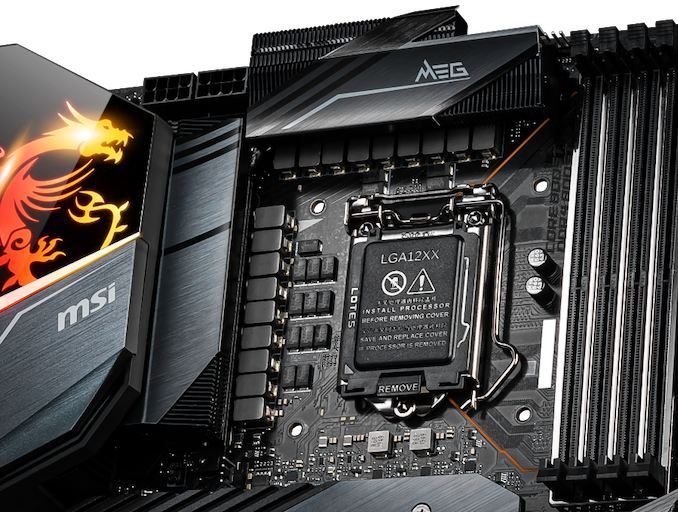 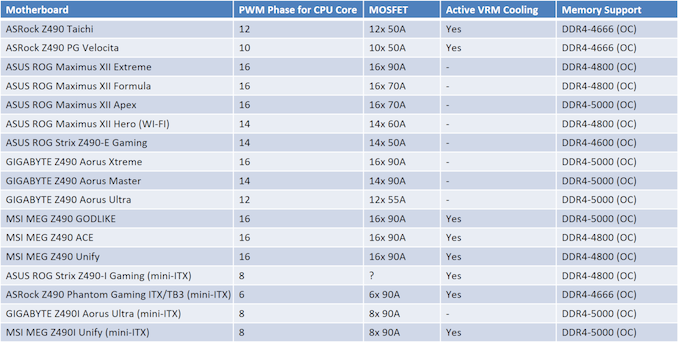 *Information as of May 7th, 2020
*VRM information is from overclock.net. Please visit the link for detail.
***”-“ indicates not available

At the premium level, memory support ranges from DDR4-4666 to DDR4-5000. DDR4-5000 is supported on flagship models and mini-ITX models, and it’s incredible! The rest of the motherboards at this level can support at least DDR-4666. If you plan to get high-frequency memory for your system, choose the motherboard with the best memory support.

When it comes to I/O, you can see the state-of-the-art Thunderbolt 3 and USB 3.2 GEN 2×2 (20Gbps) on some motherboards. We offer onboard Thunderbolt 3 support for on our flagship and mini-ITX models, as do some of our competitors. Meanwhile ASUS goes the other way, bundling a Thunderbolt card for Maximus XII Extreme.

The latest USB 3.2 GEN 2×2 (20Gbps) USB is available on the MSI MEG ACE and Unify motherboards, as well as the ASRock Taichi and ASUS Maximus XII Extreme. In total, we’re offering the most Z490 models that have USB speeds of 20Gbps — it’s even present on our mainstream MPG and MAG products. Furthermore, all of our Z490 boards are designed to be PCIe Gen 4 ready, while ASUS and ASRock are only ready for PCIe Gen 4 on specific models.

Here is our recommendation for a premium motherboard. If you have no budget concerns and are willing to spend whatever it takes to get your hands on the best motherboard around, pick the MSI Z490 GODLIKE. If you want something elite but don’t want to spend $700 on a motherboard, choose the powerful MSI Z490 ACE or Unify. 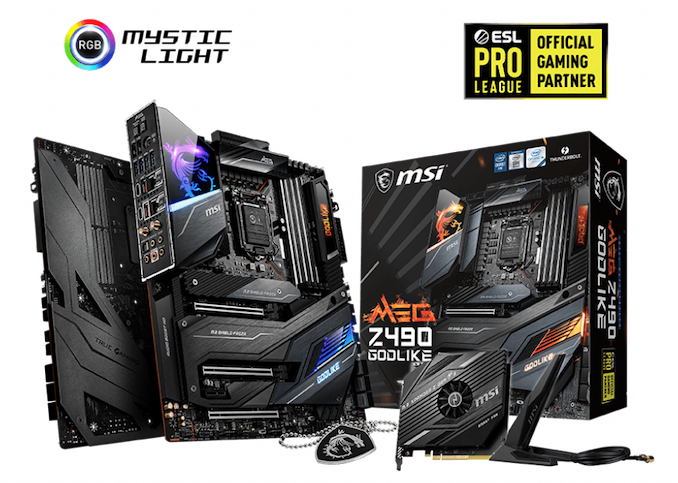 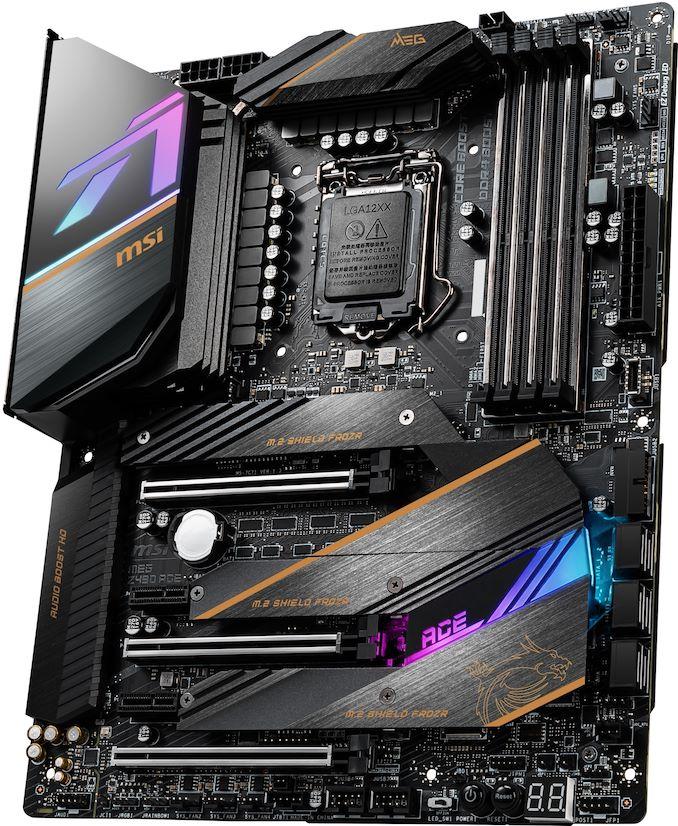 For mainstream motherboards priced around $200-300, the specifications are not as impressive as premium models. The power delivery is not incredible, but it’s still powerful enough for Core i9 and Core i7 processors. The networking goes down from 10GbE to 2.5GbE, and Wi-Fi 6 support is only available on some motherboards like our Z490 Gaming Carbon WIFI and Gaming Edge WIFI.

No motherboard at this level is offering Thunderbolt 3 support, but we are providing USB 3.2 Gen 2×2 (20Gbps) for the Z490 Gaming Carbon WIFI, Gaming Edge WIFI, and Tomahawk. The MAG Z490 Tomahawk is priced at less than $200, yet still competes at this level.

Most motherboards at this price range offer 12-phase VRM, and their MOSFETs are rated from 45A to 60A. Our best recommendation is to choose a board with a MOSFET of at least 55A, such as our MSI MAG Z490 Tomahawk. Though ideally, you should aim for 60A. 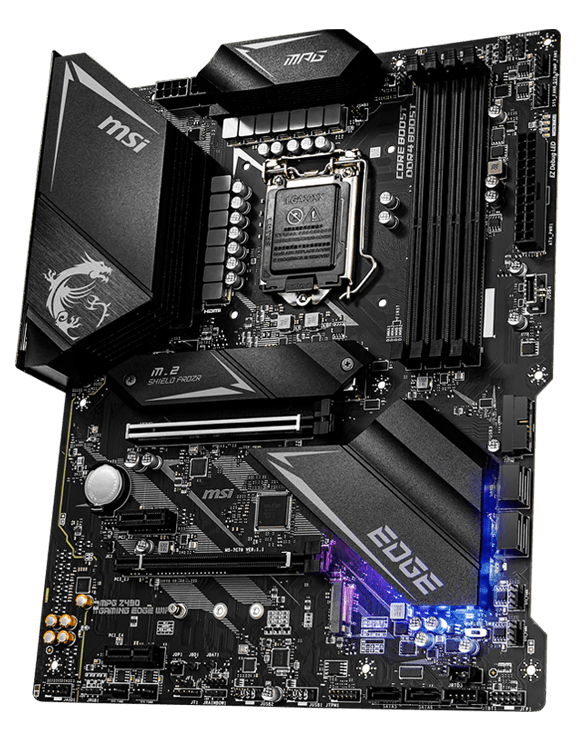 Currently, memory speed support between 3200 and 3600MHz is the sweet spot, balancing performance and price. For this reason, it tends to be the most popular choice for most mainstream buyers. However, we think that most people are going to be willing to push the memory performance by enabling XMP overclocking manually. If you’re one of those people, then we believe that our mainstream boards, all of which support DDR4-4800, will be perfect for your needs.

*Information as of May 7th, 2020
**VRM information is from overclock.net. Please visit the link for detail.

Every motherboard at this level offers 2.5GbE LAN, with the sole exception being the ASUS TUF Gaming Z490-PLUS. As 2.5GbE products have become the mainstream standard, there’s no reason to choose a 1 GbE motherboard at this price. In addition to 2.5GbE, we also offer Wi-Fi 6, while the Z490 AORUS Elite AC offers Wi-Fi AC only. Meanwhile, our MAG Z490 Tomahawk doesn’t offer a Wi-Fi connection, but it has 2.5GbE/GbE dual LAN. 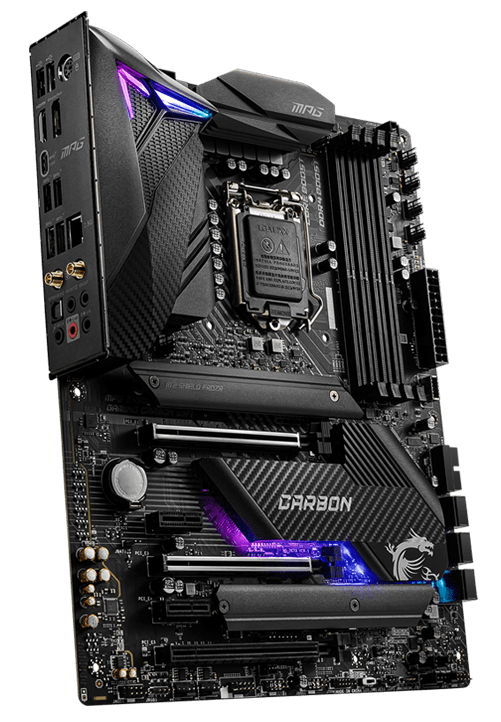 The MSI Gaming Carbon WIFI, Gaming Edge WIFI, and Tomahawk all offer USB 3.2 Gen 2×2. The frontal Type-C connection is another great feature to have. Paired with a PC chassis that has a Type-C panel, it’s very convenient for charging your cell phone and other electric peripherals. We think that it’s awesome to see that nearly every motherboard at this price range offers frontal Type-C connection, aside from the ASUS Strix Z490-H Gaming.

For networking and I/O, we still have the most comprehensive offerings overall, including 2.5GbE LAN, Wi-Fi 6, USB 3.2 Gen 2×2, and frontal Type-C connections. 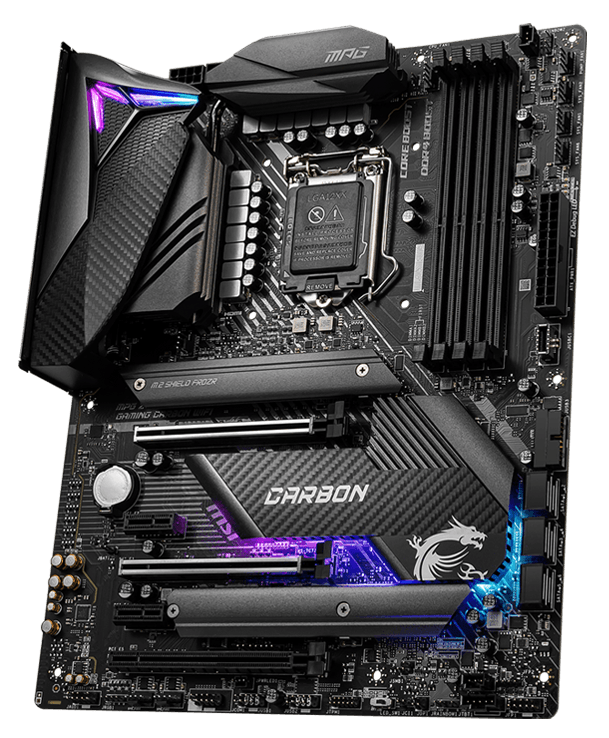 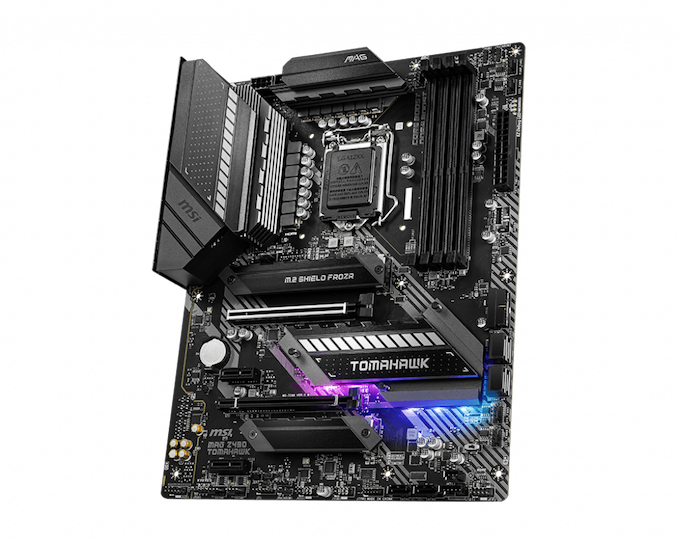 Choosing the Right Motherboard for a Budget Gaming Build

At the budget level, the ratio between features and pricing is what most people focus on.

Firstly, take a look at connectivity. We are among the only vendors that still offers 2.5GbE LAN, even for our budget models. The Z490M Gaming Edge WIFI is packed with Wi-Fi 6 support, and support for frontal Type C connection is provided on all MSI motherboards. 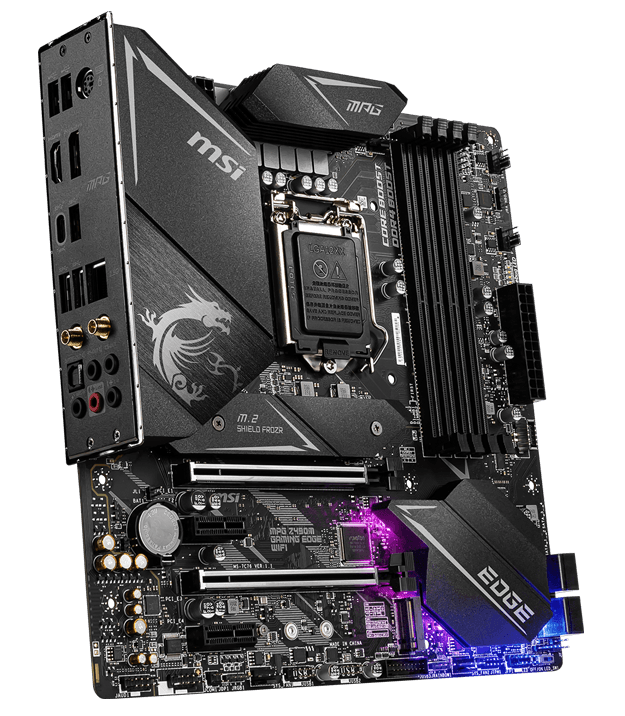 We’re also offering a pre-installed I/O shield for the Z490 Gaming Plus and Z490M Gaming Edge WIFI. This shield is not available on ASUS budget motherboards.

As a result, we believe that the Z490 Gaming Plus, Z490M Gaming Edge WIFI, and Z490-A Pro all stand out compared to the rest of the motherboards in this price range.

Power delivery at this level is not as powerful as more expensive options. We’re using 12 phases for our budget motherboards. As for PCB layers, we’re using 6-layer PCBs, as well as Asus; meanwhile Gigabyte uses 4-layer PCB for some models.

*Information as of May 7th, 2020
**VRM information is from overclock.net. Please visit the link for detail. 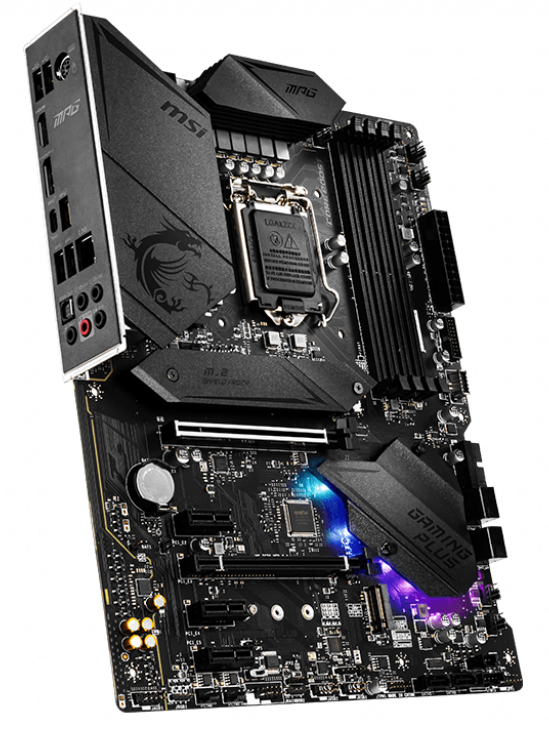