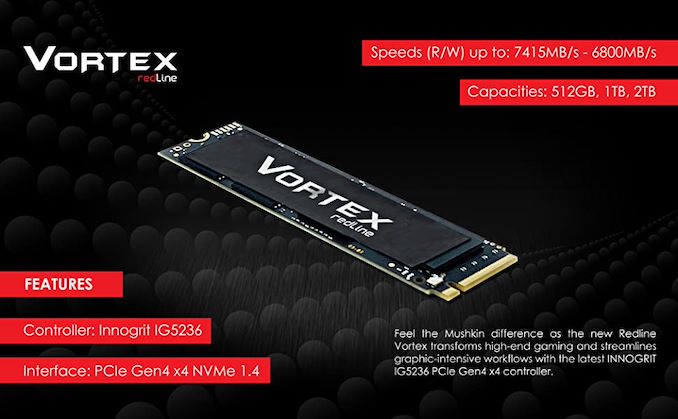 Mushkin’s lineup of PCIe 4.0 SSDs has largely remained a Phison affair. The Delta series was based on the Phison E16 and the Gamma on the Phison E18. Recently, the company launched a new series of PCIe 4.0 SSDs – the Redline VORTEX. The key here seems to be the usage of a new SSD controller – the Innogrit Rainier IG5236. It appears to be taking over the flagship mantle from the Gamma – besting it in both read and write random access IOPS and also sequential read speeds. However, unlike the Delta and Gamma, which came to the market in 1TB, 2TB, and 4TB flavors, the Redline VORTEX series has three capacity points – 512GB, 1TB, and 2TB. Detailed specifications are provided in the table below.

The SSD adopts a graphene heat dissipating label for its thermal solution – typical for the price point targeted. The performance numbers (aided by dynamic SLC caching) make it suitable for content creation and gaming – workloads that typically benefit from the capabilities provided by PCIe 4.0 SSDs.

Mushkin is not the first to market with the Innogrit Rainier controller. The Patriot Viper VP4300 series and the ADATA XPG GAMMIX S70 Blade were introduced late last year. While the Viper VP4300 is priced quite high, the Mushkin Redline VORTEX manages to undercut the XPG GAMMIX S70 blade by $12 at the 512GB capacity point and $5 at the 1TB point (based on current street pricing). The company is yet to announce availability and pricing for the 2TB SKU. The appearance of more affordable PCIe 4.0 NVMe SSDs in the market is good news for consumers.