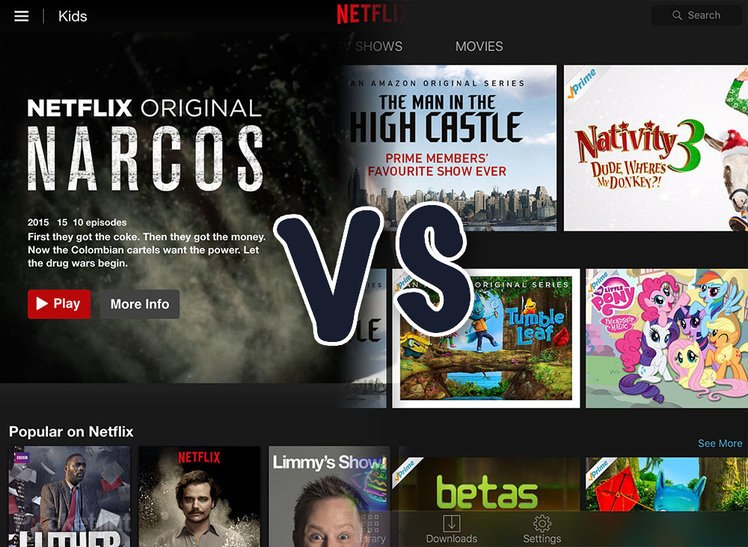 The rise of streaming services has continued at a swift pace over the last few years, with many platforms available offering all sorts of entertainment for all manner of different tastes.

However, there are two that remain the most talked about: Netflix and Amazon Prime Video. They offer similar functionality, with TV shows and movies on tap for you to watch at your leisure, they have both offer 4K HDR content and offline viewing. It makes the choice between them difficult.

That’s why we’ve put them head-to-head to find out. Which is best for you, Netflix or Amazon?

Netflix has a three-tiered pricing system that starts at £5.99 a month, but that’s for its basic package. (We’re just giving the UK prices for comparison, but $ and € prices are above.)

For that fee, you get access to standard definition streams of its films and TV content and can only watch on one device at a time (you can register more).

The next package costs £8.99 a month and gives access to HD content – presented in 1080p – and can be viewed on two devices at the same time. The priciest plan costs £11.99, adds simultaneous viewing for four devices and gives access to Ultra HD 4K content (2160p) with HDR picture tech and Dolby Vision, depending on your TV.

Amazon Prime Video, on the other hand, is part of an Amazon Prime subscription, which costs £79.00 a year. As well as give access to the entire range of SD, HD and 4K HDR content, you also get free next and same-day delivery (on millions of items on Amazon), unlimited cloud storage space for photos, access to Prime Music – Amazon’s audio streaming solution – and the Kindle Owners’ Lending Library, which gives you the chance to borrow an eBook to read on a Kindle or Fire device and a lot more.

Alternatively, if you don’t require the rest of the Prime benefits, you can sign up for £7.99 a month. There is no restriction on how many devices can be registered, you can stream to three separate devices at the same time, but only two can watch the same show at the same time.

Amazon also offers paid for content alongside the “free” subscription offering, whereas on Netflix you get everything for the subscription.

There’s a range of content supporting these formats, with a lot of the Netflix Originals in 4K Dolby Vision.

Amazon also has some Dolby Vision content, starting with Jack Ryan – but Amazon has also backed HDR10+, a rival format to Dolby Vision in addition to standard HDR10. Again, you’ll need to have a TV to support these formats to be able to watch them.

Both services also support 5.1 audio and Dolby Atmos on some titles. Again, you’ll need a sound system that can support these advanced audio formats to benefit from them.

When it comes to streaming services like Dolby Vision, you’ll need to ensure that whatever is streaming the content supports the format. For example, Apple TV supports Dolby Vision, Roku does not.

Netflix seems to have more 4K HDR content, but you do need that top subscription to access it, remember. Some 4K HDR content on Amazon is rotated as it moves content from Prime to pay-per-view.

As well as stream shows or films when you are connected to the internet, both services offer the ability to download titles to a mobile device in order to watch them when travelling. This is ideal if you know you will have no access to the internet – such as on a plane.

Both services provide different quality options for downloads, to help you sacrifice resolution and bitrate in favour of smaller files and therefore save storage space.

When it comes to device support, the list for Netflix is seemingly endless, with almost all brands of Smart TV, media player, games console, Blu-ray player, smartphone, tablet or computer operating system having a Netflix app of some kind. Paid TV set-top-boxes from Virgin Media, BT and TalkTalk (YouView) also have access. You can find out an impressive list here, but we know of others that doesn’t even cover.

Many of the devices are now also capable of viewing 4K content, with HDR or Dolby Vision where possible, although not all devices support Dolby Vision.

For a long time Amazon wasn’t as widely available as Netflix, but that’s mostly changed. Amazon is available through most third devices as well as Amazon’s own hardware – which sells at very aggressive prices. Amazon also recently added Chromecast support too, so you really can get it everywhere. You can see the device list here.

Netflix has some of its own movies, with titles like The Irishman making a big splash on the service. There are a range of Netflix exclusives, but outside those, the movie selection tends to be older – it’s back catalogue stuff really, rather than somewhere you go to watch the latest blockbusters. As everything is part of the subscription on Netflix, there’s no real way out of that.

Amazon has an advantage here. Because it offers content to to rent or buy, you can find things that are newer and pay for them. Some might not want to fork out the cash, but if you wanted to watch something specific, Amazon is will often have that available in some for before Netflix does.

Amazon then tends to offer some movies as part of Prime, but this is the downside of the dual approach – sometimes you’ll see something you want to watch then discover you’ll have to buy it. Netflix never does that to you, so you never have that sense of disappointment.

There are more TV shows on Netflix than on Amazon Prime Video. However, when it comes to TV content, the choice between the two is closer than you think. It’s also quite subjective.

While both have content deals with plenty of broadcasters, with many shows being available across the platforms, Netflix and Amazon have each been investing fortunes into original and exclusive programmes.

Netflix and Amazon original programming is not just making it harder to choose between them, with great shows on each – Punisher, Narcos and Titans on Netflix, Jack Ryan, The Grand Tour and The Man in the High Castle on Amazon, for example – it is also making waves in the more traditional sense.

Essentially, you might make your choice of which to subscribe to through studying which shows are exclusive to which platform, although the general feeling is that Netflix has higher profile TV shows than Amazon offers. For every Jack Ryan on Amazon, there’s usually a couple of decent shows on Netflix to watch.

Netflix vs Amazon Prime Instant Video: Ease of use

When it comes to the applications and front ends, Netflix seems to have it more sussed than Amazon – not least because it has a more standardised approach to presentation. Nearly all of its apps, be they on tablet, smartphone, set-top-box or TV are presented in a similar fashion. There are one or two exceptions, but the content rich user interface is generally identical across formats.

Not so Amazon, which has greater diversity in its approach. Look at the front end of the Amazon Fire TV box and compare it to the Roku channel or Android app, for example. They all present the same content but often in radically different ways.

The Amazon apps can also be confusing for customers in that as well as the content included in a Prime subscription, they give access to paid-for content as we mentioned above. There is now a switch in some places – the Android app for example – so you only see free content which improves the experience no end.

Video on both services works the same way though, with similar quality and variable bitrates depending on internet connections. And you can pause and pick up watching later in a similar way.

Netflix has the ability to set profiles for each member of the family. Each person can have their own profile so Netflix will learn their particular preferences and offer suggestions based on previous viewing. It will also put their current wishlists and watchlists front and centre when they log in.

Kids too can have their own profiles, which can be locked to content appropriate to them. There is a whole kids section, with a dedicated front-end and menu system that can be locked to a child’s profile.

Amazon has only just added profiles in Prime Video and they aren’t universal yet, so not everyone has them. Amazon does offer something that Netflix doesn’t though, and that’s X-Ray. This will provide trivia and facts, so you can see who an actor is, what the song is and find out other little details really easily – it’s a great way to identify that face you can’t quite place.

We’ll say right now that choosing between Netflix and Amazon Prime Video is not an easy task. It will likely boil down to two things though: price and preference.

For preference, you need to take into account what type of movies and shows you most like and compare the output of each – specifically the original and exclusive content. Top Gear fans, for example, will no doubt want to subscribe to Amazon’s service for The Grand Tour, in order to watch the exploits of Jeremy Clarkson and his stooges.

Comics fans would rather choose Netflix, because of the content partnership with Marvel Studios, although there’s now a shift to DC with Disney+ taking Marvel under its own roof. Netflix is probably the best single point access to streaming content – with so many big shows coming through the service, it’s almost essential viewing.

Amazon on the other hand is a much bigger platform – content to rent or buy, additional channels to subscribe to – there’s a lot that Amazon offers beyond just streaming entertainment. Of course, for those who pay for Amazon Prime, the TV service is essentially free.

Could you live with Amazon Prime and not Netflix? Sure you could – you’d have plenty of entertainment. The question is whether you could live with missing out on Netflix, which still dominates the streaming conversation.