Netgear has been building up a portfolio of software-defined networking (SDN) products over the last few years. The introduction of the cloud-based Insight management feature to their lineup of SMB products has made their lineup of routers, switches, and access points appeal to a wider customer base. SMB-focused versions of leading technologies often lag their consumer counterparts by a year or so, and updates to flagship offerings are often spaced apart. However, Netgear’s Wi-Fi 6 WAX630 (introduced in June 2021) is receiving a Wi-Fi 6E upgrade / companion today in the form of the WAX630E.

The Qualcomm-based WAX630E is one of the first reasonably-priced SMB Wi-Fi 6E APs for SMBs and micro-businesses. Many announced and leaked offerings in the Wi-Fi 6E space have been delayed (with FCC certification being a stumbling block), allowing Netgear’s offering to become available for purchase ahead of the competition. The advantages of Wi-Fi 6E have been covered in multiple articles previously – including the original Wi-Fi Alliance announcement coverage, and Netgear’s first Wi-Fi 6E product in the consumer space last year. The availability of a much wider interference-free spectrum in 6 GHz – up to seven usable 160 MHz – means that consumer experience is bound to be much better. The downside is the reduced range due to power limitations (APs at 30 dBm max., and clients at 24 dBm max.). 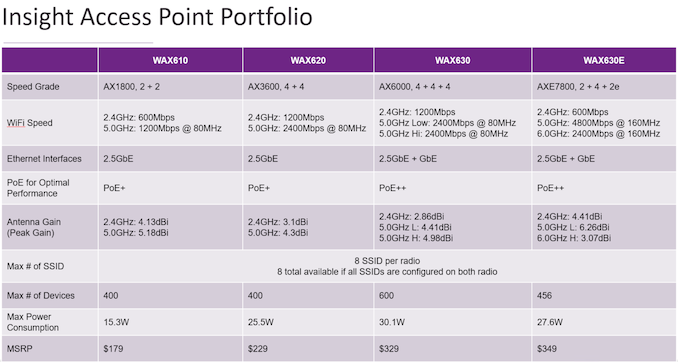 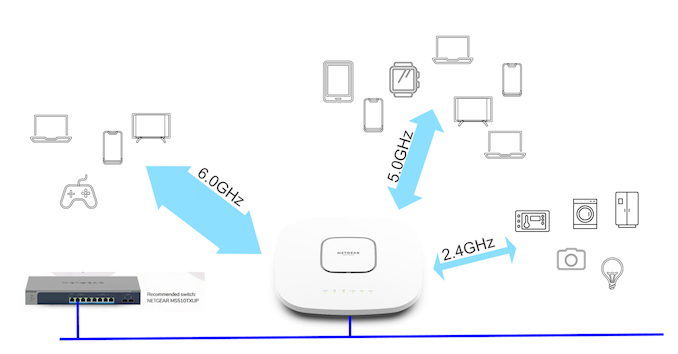 The AP supports PoE++ over the 2.5GbE LAN port (an extra 1Gbps LAN port is also available). Netgear recommends the Insight-managed MS510TXUP NBASE-T PoE++ switch for use with the WAX630E. The introduction of the new AP provides a wider range of options for Netgear’s customers, whose needs with respect to required number of clients and client types to support, speeds, and pricing may vary.

Netgear believes that cloud-based management of Wi-Fi 6E APs will be a must in the long-run. Outdoor APs will eventually need to figure out a solution for ensuring that they do not interfere with other licensed 6 GHz band users. FCC mandates that real-time geolocation database cross-checks need to be performed by APs, which might be a challenge without regular updates to the database. While the WAX630E is not affected by this (due to its indoor nature), cloud-based management / real-time connection to a database maintained by the vendor might become essential moving forward. Netgear’s Insight provides IT administrators with a centralized dashboard for multi-location installations, allowing for both local and remote management. Netgear is touting scalability and easy-to-use multi-location support as advantages over solutions requiring local controllers.

The WAX630E is available for pre-order today – $350 for the PoE variant, and $370 for the one with a power adapter included. The units are expected to ship early next month.