Mesh networking kits / Wi-Fi systems have emerged as key revenue streams for networking equipment vendors in the consumer space. In mid-2017, Netgear brought over this strategy to the SMB / SOHO space with the Orbi Pro 802.11ac (Wi-Fi 5) tri-band Wi-Fi system. Since then, Wi-Fi 6 deployment in the consumer market has achieved critical mass, with almost all modern smartphones and notebooks equipped with support for 802.11ax technology. Most vendors in the enterprise space now have Wi-Fi 6 access points (APs). Netgear’s own foray into the space started with the introduction of the WAX610 series last month. Today, they are launching the second-generation Orbi Pro with Wi-Fi 6 capabilities.

Similar to the last-gen Orbi Pro, the new Wi-Fi 6 model (SXK80 for the kit, with a single SXR80 router and a SXR80 satellite) borrows the internal hardware components of the consumer Orbi Wi-Fi 6 (RBK852), modifies the industrial design and reorients the internal antennae for better stability (rather than the peak performance aspect that is important for the consumer model). The 2.5 Gbps port is configured by default for WAN duties (to go along with Netgear’s recently introduced CM2000 cable modem), but it can be reconfigured for LAN duties also. Two of the 1G LAN ports can also be link-aggregated. The firmware is also tweaked for features required by SOHOs and SMBs. Management is done via the Insight app, rather than the Orbi app used by the consumer version. The product includes a free 1-year subscription to the Insight Cloud Management service. However, it must be noted that Insight app-based management is not a must for the device. It can be configured using a web UI on the local network also.

In terms of improvements over the existing Orbi Pro, the new version supports 1024QAM in 5 GHz, Wi-Fi 6 in both bands, and an increase in the number of radio streams from 8 to 12. Wi-Fi 6 also brings bi-directional MU-MIMO. The new Orbi Pro also supports OFDMA for better channel efficiency and the Target Wait Time feature for improved power efficiency on the client side. On the security side, WPA3 is supported and the unit is Wi-Fi certified Enhanced Open at launch. WPA3-Enterprise is scheduled to become available in a later firmware release.

Firmware features that are specific to the Orbi Pro (and not directly supported in the consumer Orbi) include better network separation and client isolation. The SXK80 supports four distinct SSIDs, each with a dedicated VLAN. Client isolation allows devices within a SSID to have better privacy and security by allowing upstream communication only (not visible to other devices connected to the same SSID). 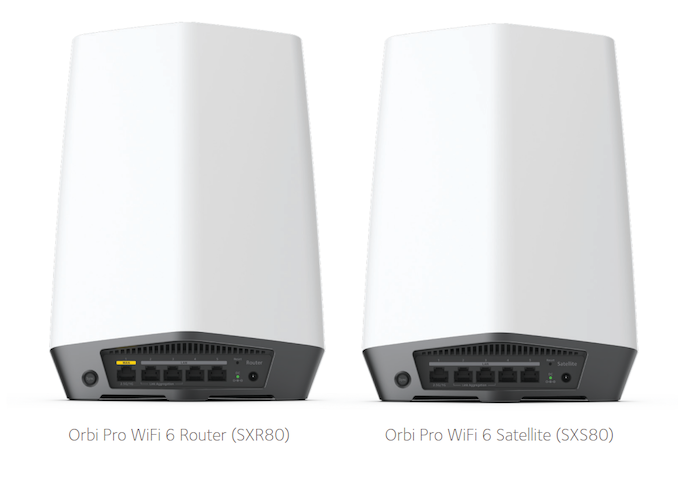 One of the key differentiators in the Orbi Pro SXK80 is the usage of Wi-Fi 6 in the 2.4 GHz band also. Most of the entry-level APs in the Wi-fi 6 space forsake this (and operate at 802.11n speeds in that band) to hit lower price points. On this aspect, the Orbi Pro happens to be more future-proof, as client support for 2.4 GHz Wi-Fi 6 continues to improve with the resolution of various interoperability issues. Netgear refers to micro-businesses as the target for the Orbi Pro, and prefers full-fledged SMBs to go the separate gateway / switch / access point route. Micro-businesses and SOHO setups are likely to benefit more from systems with a robust dedicated wireless backhaul such as the Orbi Pro, as these setups often have to do without Ethernet cables inside walls and/or ceilings for a wired backhaul.

The Netgear Orbi Pro WiFi 6 Tri-band Mesh System (SXK80) comprising of one router and one satellite is available for purchase today at $770 in the US, with European availability later this quarter. Additional satellites are priced at $420 each, with multi-satellite kits offering a discount at $1100 (router and two satellites) and $1490 (router and three satellites).