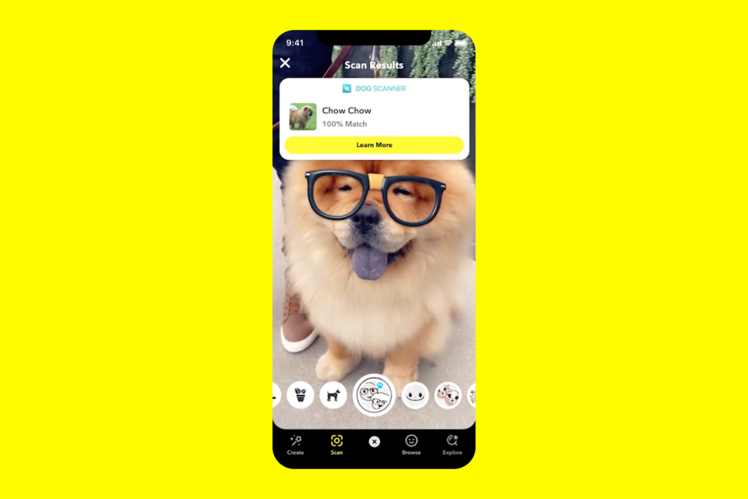 Snap has wrapped up its Partner Summit keynote, where it announced several new features for Snapchat as well as platform updates, partnership deals, and new integration efforts. Everything from AR to wellbeing was touched upon during the event. Here’s a recap of all the announcements that matter, including an explanation of everything new coming to the Snapchat mobile app.

Snap streamed the 2020 Partner Summit on 11 June at 9:45 am PT. Execs from across the company showcased new product features and announced new partnerships at the only-only event. The second-annual summit was originally set live for early April but was postponed by the COVID-19 pandemic. Snap said deep-dive video breakout sessions will be publicly available after the keynote.

Snap announced new navigation tools coming to Snap at Snap Partner Summit 2020, including an Action bar, Places in Snap Map, Topics for Our Story, and Story Replies. It also announced new AR experiences, such as SnapML creations for the Lens Studio, shared Local Lenses, and the ability to identify plants and more with a scan. Snap also announced new Discover content and Snap Originals.

There’s a new Happening Now section in Discover that highlights news, weather, and horoscopes, as well. Other announcements include a slate of wellbeing efforts, such as Here For You hub of resources in profiles. There are a number of platform upgrades, too, from new HTML5 experiences in chat (called Snap Minis) to a Bitmoji 3D avatars in third-party games. Check out the details below.

Snap is introducing a new way to navigate Snapchat, as well as new features for the Snap Map and Stories. 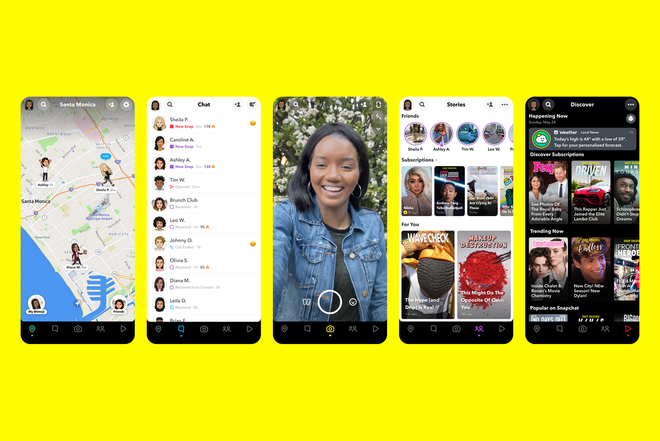 Snapchat has a new Action Bar element, which Snap said is designed to provide “top-level navigation” from the moment you open the Snapchat mobile app. It’s supposed to contextually change based on what you’re doing or watching, as well. 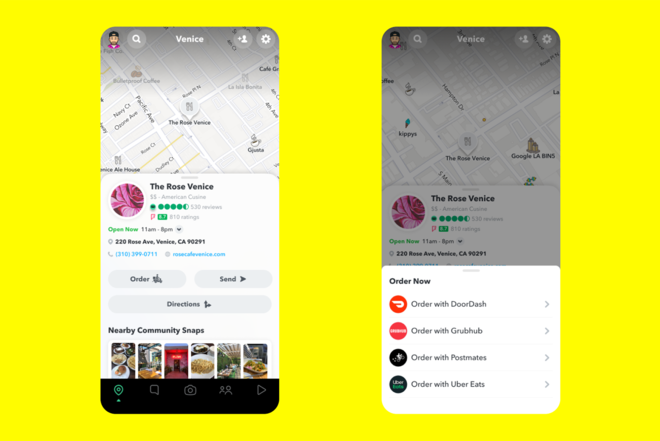 Snap Map, a map feature that shows what your Snapchat friends are up to and highlights stories from the Snapchat community, is getting an update that will add Places. These make it easier to find spots that are popular around the globe.

A Place Profile includes Snaps from the location, the address, hours of operation, and reviews from TripAdvisor and Foursquare. You’ll also be able to order food at Places – through Postmates, DoorDash, and Uber Eats – starting soon in the US. 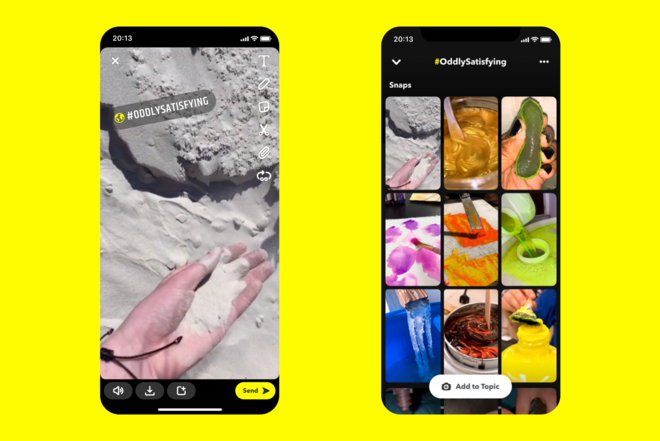 Topics: Our Story gets topical

Our Story is where Snapchat users can submit their snaps and videos about the events happening around them, and other users can see it globally. They are categorised by the Snapchat team to capture the local event. Snap said more than three million snaps per day are shared with Our Story. Now, there’s a new way to use a Topic sticker or submit your Snap to a Community Topic.

Snap said it’s rolling out Story Replies to ‘make it easy to communicate with the Snap Stars you’re following”. These creators and celebrities can then turn your Story Replies into stickers and add them to their stories for things like question-and-answer sessions.

Snap’s main AR product consists of Lenses made by Snap’s own design team and a global creator community. Developers and creators use Snap’s free desktop app – Lens Studio – to build and distribute these AR experiences onto Snapchat.

Snap is updating Lens Studio with new features, including something called SnapML, which lets any developer use their own machine learning models to power Lenses. In other words, developers can create their own Lenses with neural networks that they’ve trained.

Snap said it’s partnering with Wannaby, Prisma, CV2020, and others on the first “SnapML creations”.

Snap is previewing Local Lenses, a new feature, which it said enables “persistent, shared AR world built right on top of your neighborhood”. Soon, Snapchat users will be able to use Local Lenses to enter a virtual space together and “decorate nearby buildings with colourful paint”. 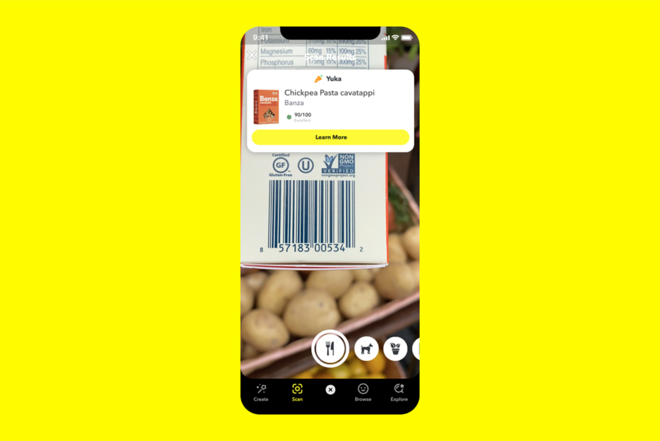 Snapchat users can “press and hold” on the camera screen to unlock relevant Lenses based on what the camera sees.

To improve this feature, Snap has partnered with PlantSnap so the Snapchat camera can identify 90% of all known plants and trees. It’s also partnering with Dog Scanner, allowing the camera to recognise almost 400 breeds. Lastly, later this year, thanks to Yuka, Snapchat will add a Nutrition Scanner, which provides a rating on the quality of ingredients in many packaged foods. 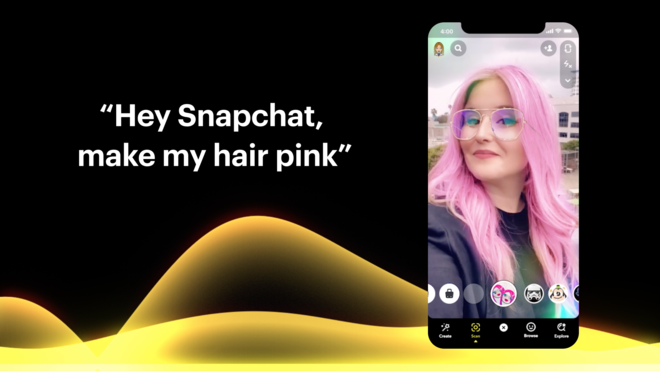 Lens Voice Scan: Apply a Lense with your voice

Snap didn’t provide many details, but a promo video for its new AR-based upgrades indicated users will be able to activate a “Lens Voice Scan” to apply certain Lenses. In one example, Snap showed a woman asking Snapchat to turn her hair pink, and it did just that.

We will update this post when we learn more.

Snap describes Discover as a “closed, curated” platform. But it’s basically a section in Snapchat where you can watch short-form original shows. Snap said more than half of the US Gen Z population watches Snap Originals. Over 35 million Snapchat users, for instance, have watched Will From Home, a new Snap Original where Will Smith shares his stay-at-home experience.

Snap is announcing new partnerships designed to bulk up the amount of informative and entertaining content available to watch in Snapchat’s Discover section. Disney, ESPN, NBCUniversal, ViacomCBS, the NBA, and the NFL have all entered new multi-year deals with Snap that will result in fresh shows and original programming (aka Snap Originals) for Discover.

Snap is also partnering with creators like Laugh Out Loud founder/CEO Kevin Hart, writer and director Catherine Hardwicke, actor and producer Anthony Anderson, and Bunim/Murray Productions. Some of their new Snap Originals are set to premiere over the next year, and they’ll include “unscripted series, character-driven docuseries, and scripted dramas and comedies”.

One of the new shows is set to “help demystify mental health”. Called Coach Kev, it’s produced by Laugh Out Loud and features comedian and producer Kevin Hart sharing positivity and wisdom, “for anyone aspiring to live their best life”. It’ll premiere later this year. 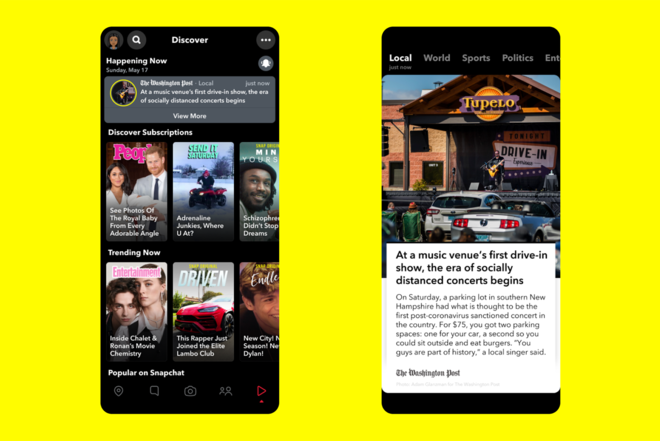 Snap is introducing a news feature in Discover, called Happening Now, so users can consume more breaking news through the Snapchat app. Snap said over 125 million people watched news stories on Snapchat so far in 2020, and that Happening Now turns these stories – whether it’s politics, entertainment, sports, etc – into a new “easy-to-consume format customised for mobile.”

Snap is announcing new features designed to educate and support users struggling with their own wellbeing. Snap surveyed its users and found that, when they experience stress and anxiety, “their friends are the first people they turn to when they need help, more than professionals or even their parents”. So, it’s offering preventative wellbeing resources for users and their friends. 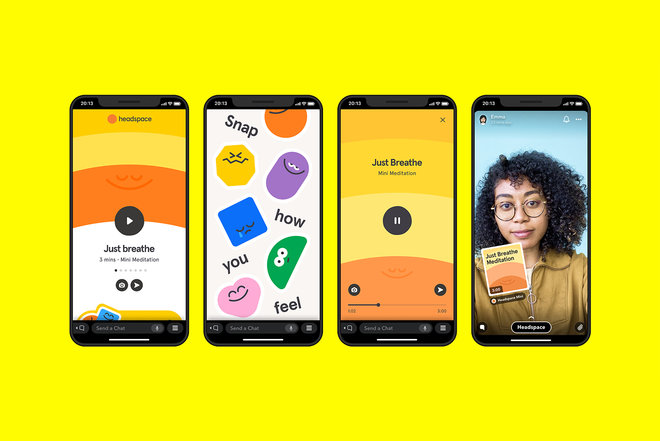 Snap partnered with Headspace, a guided meditation and mindfulness service. As part of another new feature – called Snap Minis, which allows developers to offer their own mini experiences in Snapchat – there will be new Headspace Mini in the coming weeks that will give Snapchat users access to Headspace’s meditations and mindfulness practices. This all happens directly in a chat.

Snapchat has an in-app reporting tool that allows Snapchat users to alert Snap when they worry their friends are at risk for self-harm, and it will then notify that friend of any help available. Snap is updating this experience so that Snapchat users can immediately get connected with emergency services, or they can message the Crisis Text Line or talk to the National Suicide Prevention Hotline.

Snapchat is launching a new safety notification that prompts Snapchat users to review their list of friends and shore up their privacy.

Here For You: New hub in users’ profiles

Snap has a new mental health tool, called Here For You, that’s part of Snapchat’s built-in search feature. It is designed to show “safety resources” from mental health experts – including local experts – when you search for certain topics, such as anxiety, depression, stress, grief, suicidal thoughts, and bullying. Now, Snap is adding a new Here For You Center in Snapchat users’ profiles.

Finally, Snap announced a slew of new updates and partnerships across its SnapKit, Snap Games, Bitmoji, and other platforms. SnapKit includes tools that let developers integrate some of Snapchat’s best features into their apps. Meanwhile, Snap Games is Snap’s gaming ecosystem of mini-games you can launch from conversations. Then there’s the Snap Minis we discussed earlier.

These are just a few of Snap’s platforms and ecosystems. Here’s a look at what’s new across them all.

Snap Minis are HTML5 experiences designed to be used in conversations in Snapchat. Here are a few of the Minis announced so far: 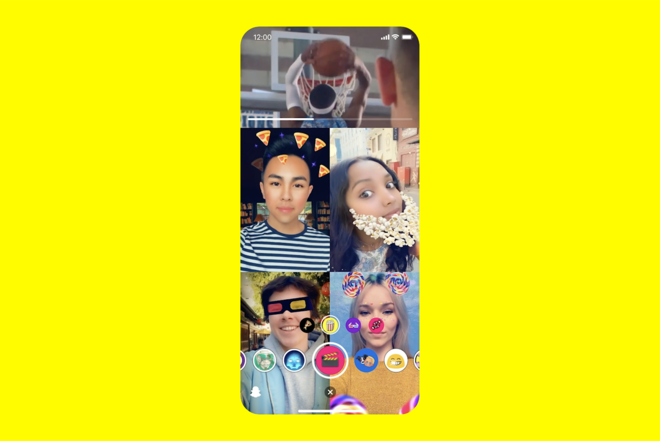 Snap is introducing Camera Kit for developers so that they can bring Snapchat’s AR and camera capabilities to their own apps. Snap said that, through Camera Kit, Lenses built using Lens Studio can now live on their app and Snapchat. Here are partners planning to use Camera Kit:

As an update to Snapchat’s Creative Kit, Snap is introducing Dynamic Lenses, enabling developers to bring real-time information from their apps into Lenses. Users will also be able to share lenses to Snapchat from apps, including Houseparty, Nike, and Yahoo! Fantasy Sports.

Snap is kicking off a new initiative called Bitmoji for Games. It brings 3D Bitmoji avatars to third party games, so users can play as their Bitmoji in various titles on any platform, including mobile, PC, and console. Keep in mind Snap bought Bitmoji years ago and has long offered its users the ability to send stickers and other cute animations with their custom Bitmoji avatars.

A few of the Bitmoji for Games-supported titles at launch include:

Snap has announced a new slate of games from itself as well as from new and existing partners: