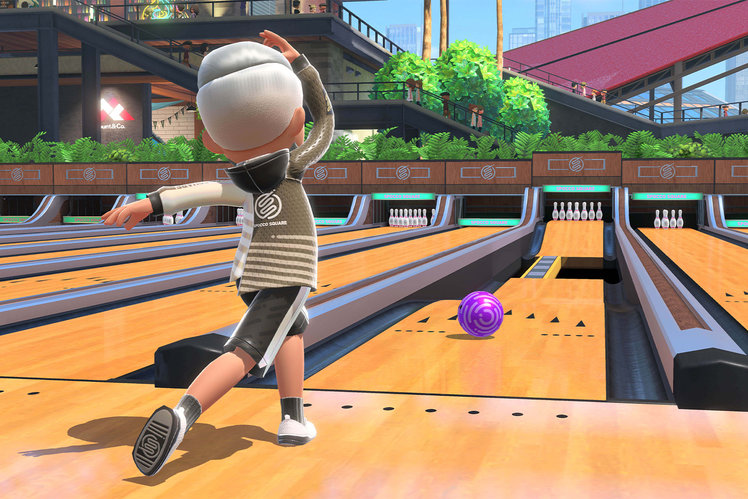 The Nintendo Switch has been on the scene for ages now – with plenty of all-time great games released since its launch in 2017 – but it’s been missing one huge part of the company’s 21st-century success story: a follow-up to Wii Sports.

The party sports game was an integral part of the Wii’s astronomical success, but we’re only getting a Switch equivalent five years into the newer console’s lifespan. We went to Nintendo’s UK headquarters to get a hands-on look at Switch Sports ahead of its release at the end of April. Here’s how it’s shaping up.

A world of sport

The game has a bright and airy look and feel to it, with clean, simple menus that make it easy to get into the fun.

The roster of sports this time around is an interesting one. Classics are on the table in the form of tennis and bowling, while newcomers round out the list – badminton, football, volleyball and chambara (sword fighting).

It’s a fairly diverse set of options, and each takes place in its own distinct environment, with the surroundings more vivid and interesting than ever, making it all the more bearable to watch people play while you wait your turn.

You also get to customise the look of your character, or import a Mii from other games if you’ve already made one. There are a limited set of options when you first make your sports star, but you’ll unlock more outfit choices and accessories as you play the game over time, according to Nintendo. 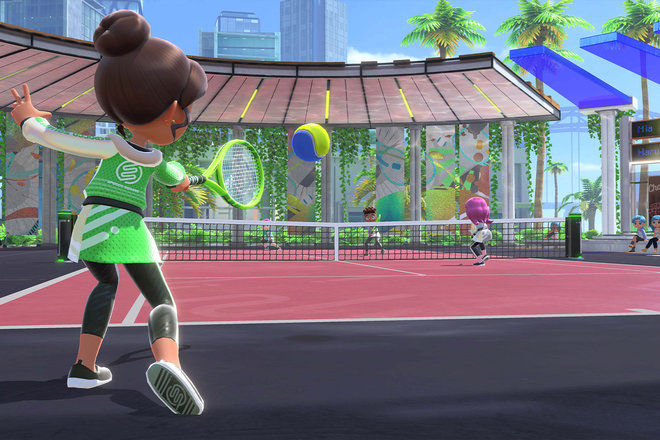 Once again, there’s a fun and zippy soundtrack to the menus, which is something that has become so iconic since Wii Sports’ launch. We’re impressed by the presentation values overall; the game looks solidly crisp on the TV (which is where you’ll be playing it, given the motion-controlled focus).

It’s a real buzz slipping back into the tennis or bowling shoes we’ve left vacant for so many years, and playing the more familiar games in Switch Sports’ roster is a throwback in the best way. Bowling is just as relaxing and precise as it ever was, and tennis has the same variation in speed and intensity as rallies tally up. 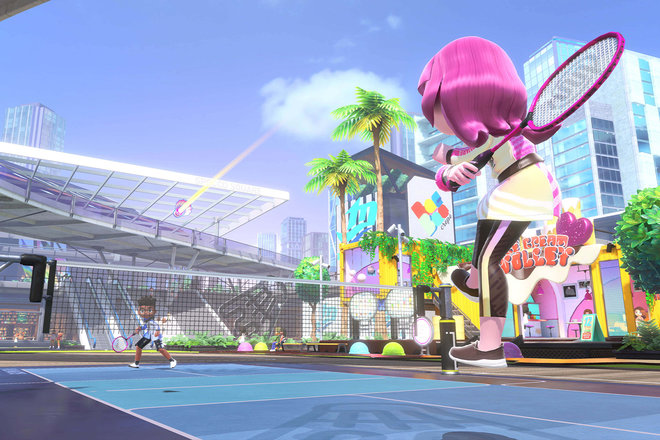 Comparing these two sports to the Wii days is interesting, too. While the precision of the motion controls is demonstrably better – and you can really feel this as you twist your hand to put some spin on a bowling ball – it also feels like nothing has changed when things start getting frantic.

We still found ourselves panicking and waffling our Joy-Con around when we were on the back foot in tennis or badminton (which plays very similar but a bit more quickly) and, most importantly, this still yielded the same breathless sense of fun that Wii Sports spread so far. It’s a really important element for Switch Sports to capture, and the early signs suggest Nintendo’s achieved it.

We got to try all of Switch Sports’ modes, and some of them represent interesting additions. Chambara had some slight issues around our Joy-Cons’ alignment, which made it feel a little jankier than the other games, but it did offer a fun rock-paper-scissors style combat that can be as quick or as tactical as you and your partner like. 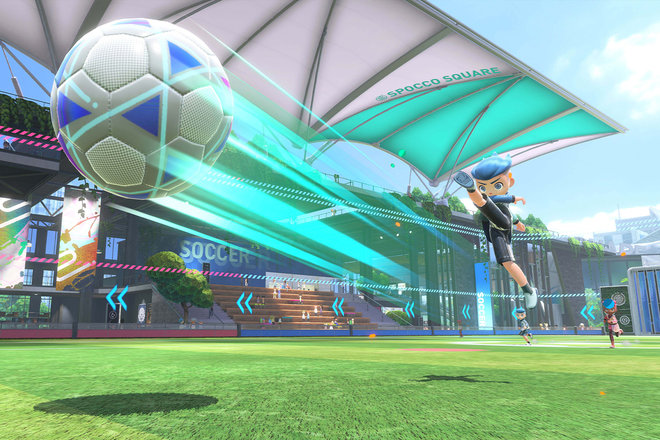 Volleyball, where we started our session, has you trying to string together sets, pops and spikes to speed the ball past your opponents, and its focus on teamwork could be popular for those who don’t want to be in competition with each other.

Football, meanwhile, is a surprisingly in-depth new offering. It’s like Rocket League, but played at a snail’s pace – affording you far more time to react and reposition, but with the same loose potential for off-the-cuff plays, thanks to the oversized ball’s physics properties. Whether it can hold our attention remains to be seen, given its more complex controls (with camera control and full movement options). We have a feeling the upcoming Mario Strikers: Battle League might offer a better alternative.

Most of the sports offer a couple of modes to try out, as well – from obstacle avoidance in bowling to a pure penalty shootout in football (complete with shrinking goals when you’re on a streak). They’re fun extras that should go a long way to keep the games feeling fresh even once you’ve had them a little while. 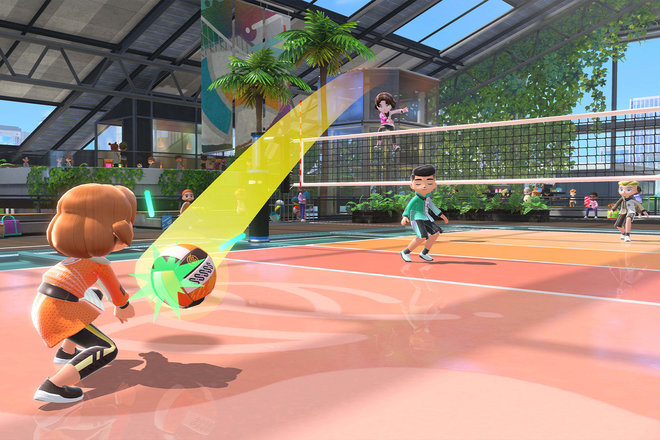 In football’s case, this also meant slipping on the leg strap for some satisfying kicks – something that will only be available in the penalty mode at launch but will come to the game more widely in subsequent updates. There’s good news for those who have Ring Fit Adventure already, too – that game’s leg strap will work seamlessly with Switch Sports.

We played entirely locally, together and against another player, so we can only report back on what it’s like to play Switch Sports with a partner next to you at this stage – and it’s mighty fun.

Nintendo’s made it clear that online play is going to be a huge part of Switch Sports’ longevity, though, and we’ll have to wait until launch to see how this pans out. You’ll need a Nintendo Switch Online membership to play online, of course. 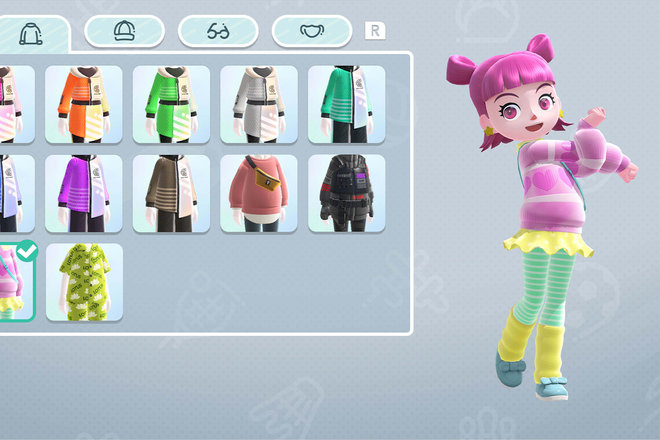 It doesn’t sound like anything else will be locked behind the more expensive Expansion tier of that service, thankfully, and it also seems that logging on to play regularly should net you plenty of cosmetic rewards.

That said, we’re not sure people will be coming to Switch Sports in search of a detailed progression system. It’s going to be a party game for most of those who buy it, and, on that front, what we played holds a huge amount of promise.