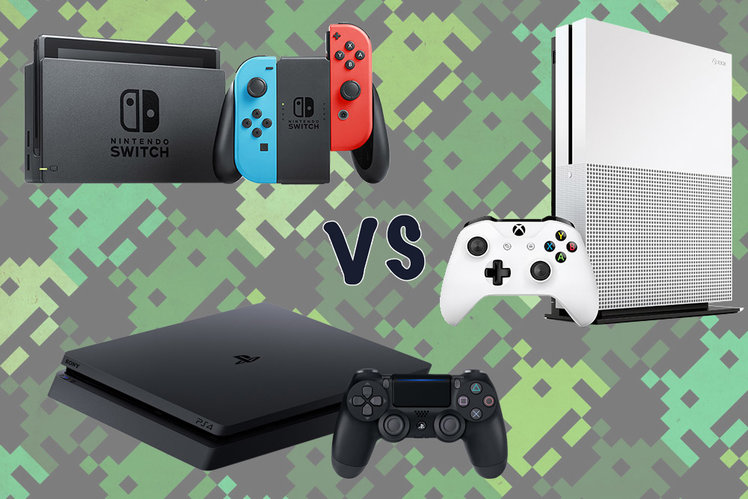 So, you want a new games console but don’t want to go next-gen quite yet. Well, there is still plenty of choice away from the allure of the Xbox Series X/S and PS5. And, thanks to years of game releases and refinements, they are jam packed with gaming goodness.

There’s the groundbreaking Nintendo Switch (plus the Switch Lite), the PlayStation 4 and the Xbox One S. Then, for those with a larger budget, there are the 4K gaming powerhouses, the PS4 Pro and Xbox One X (which has been discontinued but is still available from many retailers).

That’s why we’re running through the major last-gen games consoles right here, to see which would best suit you.

The Nintendo Switch is markedly different from its rivals in hardware terms. It has a modified Nvidia Tegra X1 platform – that’s an ARM-based mobile device processor similar to the chips in high-end phones and tablets – while the PlayStation and Xbox consoles all opt for more conventional computing power.

While the Switch has a 6.2-inch screen, the Switch Lite downsizes this to 5.5-inches. The key difference is the Lite doesn’t have removable Joy-Con controls, unlike the main Switch. It’s also a permanent handheld – there’s no dock to enable you to connect it to a TV as with the main Switch.

On the Switch, games have the potential of running in 1080p 60fps when in docked mode and fed to a TV, 720p 60fps on its own integrated screen when on the move. Most Xbox One S and standard PS4 games run at 1080p these days, with some achieving 60fps.

The PS4 Pro and Xbox One X are capable of stretching that resolution up to 4K at 60fps. All the Xbox and PlayStation consoles are capable of high dynamic range (HDR) graphics too. The Switch can’t match this, nor can it really hold a proper candle to the graphical performance these consoles can manage.

Where the bigger Nintendo Switch has a distinct advantage over its direct rivals is in portability. It doubles as both a home console and handheld games machine so is the only one you can take on your travels with you, to play the exact same games on its built-in 6.2-inch screen. And, as we mentioned, the Lite is for handheld use only.

The Xbox One S, Xbox One X, PS4 Pro and PS4 have physical disc drives, with the Xbox One consoles also able to play 4K Ultra HD Blu-rays. Sony, even as a founding member of the Blu-ray Disc Association, decided against adding a 4K Blu-ray deck to either PS4. They are still able to play conventional 1080p Blu-rays, but not Ultra HD discs.

The Nintendo Switch can do neither. The Japanese firm opted to dispense with discs altogether, with games coming on cartridge instead, much like the 3DS and Nintendo consoles of yore.

Games are also available via download stores, but considering how stingy Nintendo has been with on-board storage, you’ll have to invest in a microSD card to store more than a couple at a time.

The Xbox One S was originally available in a 500GB size, although the 1TB version is the standard model you’ll find in stores these days. The Xbox One X also sports a 1TB drive.

The latest PS4 is available in 500GB and 1TB sizes, while the PS4 Pro is a 1TB console. All Xbox and PlayStation machines have the ability to increase the storage through third-party hard drives – via external USB 3.0 HDDs. In addition, all PS4 models can be expanded through swapping the internal 3.5-inch internal drives.

The Switch, on the other hand, comes with 32GB of built-in storage. Big-name games, especially those from Nintendo itself, often take up at least half of that.

When it comes to quantity of games, the Xbox One and PS4 consoles might win for some thanks to being around for a few more years. The Nintendo Switch is younger by comparison.

The Switch’s line-up is still very healthy though. That’s thanks to much greater support from developers and publishers than Nintendo’s last console, the Wii U, as well as a load of great re-releases from that era.

Quality is more subjective. Nintendo has some bone fide triple-A titles you won’t find on any other platform (save for the defunct Wii U), such as The Legend of Zelda: Breath of the Wild, Mario Kart 8 Deluxe, Super Mario Odyssey, and Animal Crossing: New Horizons.

Of course, both Xbox and PlayStation have their own exclusives, from Forza Horizon 4 and Gears 5 on the Xbox One and Marvel’s Spider-Man and God of War for PS4.

The area where Nintendo Switch would hope to improve is in having some of the same big, multi-platform games as the others.

On the other hand, the Switch does trump its rivals in motion gaming. While the other two have largely shunned the format, the Switch embraces its Wii heritage with its clip-on Joy-Con controllers also doubling as motion remotes. This has brought families back to Nintendo in their droves.

And there’s Ring Fit Adventure, too, which comes with a leg strap into which you insert one of the Nintendo Switch Joy-Cons. It’s a fitness game designed to increase your activity.

All Xbox One and PS4 consoles are great media streamers as well as games machines. They each have Netflix and Amazon Video apps, with the Xbox One S and Xbox One X offering both in 4K HDR – even Dolby Vision on some compatible TVs. The PS4 Pro offers Netflix in 4K HDR too.

BBC iPlayer and other terrestrial TV catch-up services can be found on the consoles too. Apple TV is now available on the Xbox One.

The Nintendo Switch doesn’t have any of these services available. It does have a YouTube app, but there’s currently no sign of Netflix or Amazon anywhere on the horizon.

It’s no secret that when you’re looking to pick up a new console there’s nothing like a great big bundle to get you the best value for money. Whether it’s throwing in an extra controller for multiplayer, a couple of successful games, or anything else, it’s a great way to start from slightly further on than square one.

The good news is that all three of the consoles (and their variants) have great bundles that you can pick from, although the exact selection is changing all the time. Luckily for you, we’ve got a feature for each to make sure that you can choose the best available.

It’s clear that the Nintendo Switch and Switch Lite are very different games consoles to the other machines. In many ways, the Switch could be seen as a second, portable, console for hardcore gamers.

The motion gaming – as seen with Ring Fit Adventure – could be a big draw too, especially if family-oriented games are your sort of thing. This is an area where Nintendo excelled with the Wii and it therefore offered something different to the Xbox 360 and PS3 of the time. The same is true again.

The biggest barrier is price, with the main Switch considerably more expensive than the standard Xbox One S and PS4 thanks to being the newer kid on the block. The Switch Lite, though, does match Microsoft and Sony more squarely on price around the $200/£200 price point.

If you have a 4K HDR TV, however, you really should consider saving those extra pennies for a PS4 Pro or Xbox One X. Games run better on them and those with enhanced graphics are simply awesome to look at, let alone play.

And don’t forget to consider the PS5 or Xbox Series S or X if you want something slightly more future-proof – for us, it’d have to be a Switch or a next-gen console at the moment, assuming you can actually find one in stock anywhere.