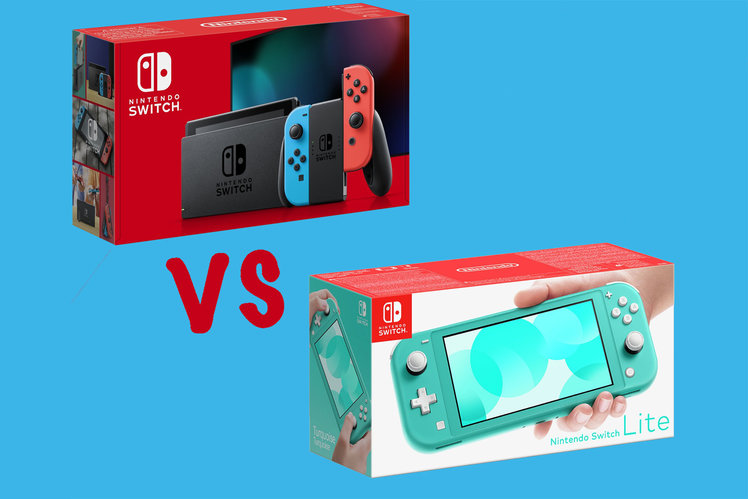 Nintendo released a third member of the Switch console family in late 2021 – the Nintendo Switch (OLED model), with an upgraded display and a new dock.

However, there are still two less new versions you can buy. The original Nintendo Switch is a handheld and TV console in one, while the Nintendo Switch Lite is smaller and more portable, as it’s handheld only.

So, what are the differences between the two consoles and which is most suitable for you?

There are a lot of things that are different about the two consoles. The key similarity is the games they run and the way you control them in handheld mode (because the Switch Lite can only do handheld mode).

They also have the same resolution screen (though not the same size!) and feature the same custom Nvidia Tegra processor (which, like all smartphones, is based on an ARM-derived design).

The key difference is in the fundamental use of each Switch. The standard Nintendo Switch can be used either connected to your TV (or another display) in a supplied dock or as a handheld or stand on a tabletop using its own display, while the Switch Lite can be used only as a handheld.

As it’s handheld-only, the Switch Lite doesn’t have detachable Joy-Con controllers, whereas the standard Switch does – once detached they’re used wirelessly with the main Switch unit, primarily for when it’s attached to your TV or standing up but can be reattached to the main Switch console for handheld play.

For games that do not support handheld mode, you can wirelessly connect controllers to the Switch Lite but if you buy separate Joy-Cons, you’ll also need a Joy-Con Charging Grip to keep them juiced.

The Switch Lite also replaces the four directional buttons on the left Joy-Con with a traditional D-pad.

The main Switch is available in a grey version or the most recognisable version featuring blue and red Joy-cons. However, there have been special editions such as the now-rare Animal Crossing edition (we missed out on that one!) The matte-finish Switch Lite is available in coral (pink), turquoise, yellow or grey. Again special editions have been available, including a Pokémon version.

As we mentioned, both units have a 1,280 x 720 LCD screen, but the size is different. While the main Switch has a 6.2-inch screen, the Switch Lite downgrades this to 5.5-inches with smaller bezels around the display.

The Switch Lite promises around 3 and 7 hours of gameplay depending on what you’re doing, while new standard Nintendo Switches (post mid-2019) promise between 4.5 and 9 hours. Older Switch consoles have markedly worse battery life which can mean 2.5 hours at the bottom range of battery life and 6.5 hours at the top end. So exercise caution when buying second-hand consoles.

It does depend on what you’re playing. Nintendo says the Switch Lite will last for four hours with The Legend of Zelda: Breath of the Wild and 5.5 hours for the standard Nintendo Switch (for the after mid-2019 version).

If you’re driven by budget, there’s only one winner here – the Switch Lite. But the normal Nintendo Switch boasts a lot of extra features and is the only choice if you want to use the Switch as a traditional games console with a TV or another display.

It also boasts the flexibility of the detachable Joy-Cons to use with Mario Kart wheels or Ring Fit Adventure. Mind you, if you’re only going to be using your Switch on the go, then get the Lite – it’s lighter, more pocketable and has decent battery life (even if it doesn’t match that of the standard Switch).