Installing smart home gear can be challenging if you don’t own your home. An inexpensive no-drill doorbell mount makes it trivial to use a smart video doorbell without making altering anything and risking your deposit.

Why Use a No-Drill Doorbell Mount?

Although your landlord might be open to you installing smart home gear, it’s a pretty safe bet for the majority of folks that drilling holes in things, swapping hardware, or making modifications to the wiring of the existing doorbell is out of the question—which makes installed a video doorbell a bit tricky.

Even sticking a smart doorbell to the wall with strong outdoor tape might be asking for trouble, as removing it could damage the facade of your rental.

The solution? A no-drill doorbell mount that attaches to the door itself and not to the structure of the building. Although they come in various shapes and sizes to fit different styles of video doorbells, the basic design is the same.

The mounts are made of metal in a squared-off U shape. One side of the U features a metal box to house the doorbell unit, and the other side of the U has a tension screw to secure the assembly to the door.

You simply charge your video doorbell, put it in the metal box, slide the whole assembly onto the edge of your open door until the base of the U is snug against the door, and then tighten the tension screw down to prevent it from sliding.

The design is great for renters who want to avoid damaging their apartment or rental home, but at the same time, it’s great for anybody who doesn’t want to modify the exterior of their home for whatever reason. Live in a historic home and don’t want to mess with the old wiring or drill holes in the beautiful woodwork or stone around your door? This solution is great for you too.

The design of no-drill doorbell mounts is pretty simple. As long as there aren’t any glaring manufacturing deficiencies like sharp edges, poor welds or joints, or missized doorbell mounting chambers, there aren’t really that many differences between the various models, though a few of them do stand out.

One of the most popular models on the market is the Doorbell Boa. It was early to market, it’s sturdily designed, and a few years ago it went viral on TikTok which helped moved a bajillion and one units. 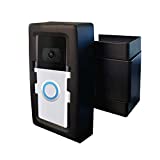 If you’re looking for a solidly constructed mount that’s compatible with Ring doorbells generation 1 through 4 (but not the Pro models), Arlo, Blink, Eufy, and more, it’s a solid pick. As long as your doorbell is physically smaller than 4 inches wide, 6.5 inches tall, and 1.75 inches deep, it’ll work.

In addition to the steel-box style design the Doorbell Boa (and its numerous clones) use, there are also a variety of doorbell-specific models out there, some of them with handy features like angle adjustments.

This doorbell mount, for example, is very low-profile, designed to work only with Blink doorbells, and features a 90° pivot allowing you to adjust the view up to 45° in either direction. 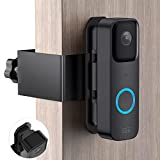 If your door is right next to a wall, that’s a great way to get a better look at your yard or hallway instead of the wall of your garage or such.

In addition to reading the specifications to ensure that the mount is compatible with your doorbell (and sized correctly for the depth of your door), there’s one final consideration.

Because the video doorbell is wireless and not hard-wired into your home’s physical doorbell, you’ll need some way to get notified inside if the doorbell is rung.

If you have smart speakers and they support notifications from your video doorbell, that’s one simple solution. When your Nest doorbell rings, for instance, it’s simple to have your Nest speakers announce, “Someone is at the front door.”

You may also wish to buy a plug-in chime to compliment your video doorbell. Most of the major players in the video doorbell market sell wireless companion chimes for their doorbells. You simply plug the chime in, pair it, and it goes off whenever the doorbell is pressed. You’ll find models for Ring, Arlo, Eufy, Wyze, and others.

The nice part about using a smart speaker or a wireless chime paired with your video doorbell and a handy no-drill mount is that when it comes time to move, you can just pack the whole thing up and take it with you.

The Best Video Doorbells of 2022 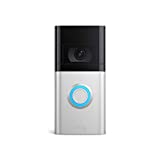 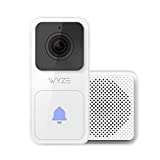 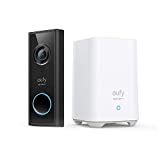 Best Video Doorbell Without a Subscription 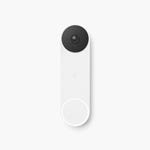