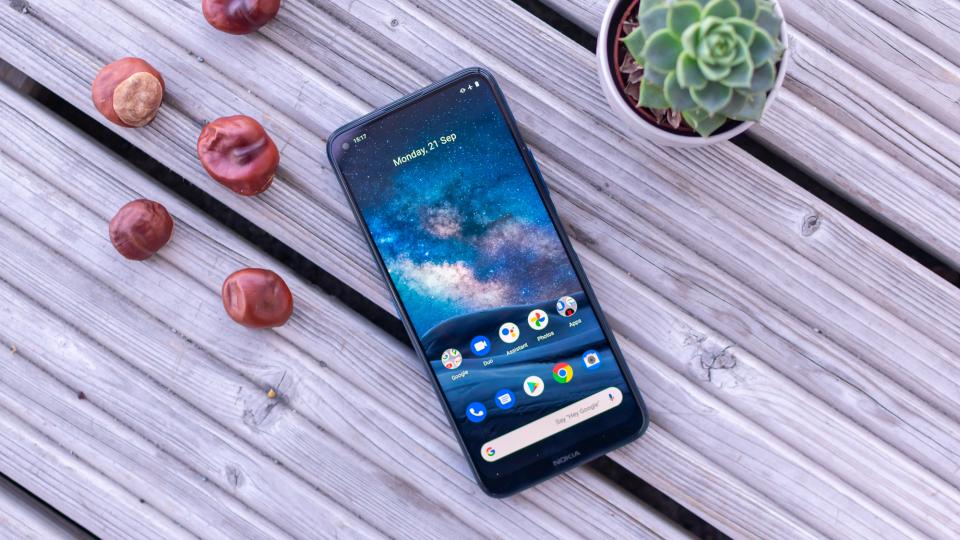 5G comes to the Nokia 8.3, but does it distance itself from the already saturated mid-range market?

If you’re keen to delve into the world of 5G but the prices make you balk, this affordable offering from Nokia is looking all the more palatable. Now with a tidy £100 off in the Black Friday sales.Amazon£500£400Buy Now

Poor Nokia. It’s been a turbulent year for the entire mobile industry but, thanks to the ongoing coronavirus outbreak and subsequent lockdown restrictions, Nokia’s usual flurry of smartphone announcements have somewhat flown under the radar. This is mostly due to the fact that it hasn’t been able to conduct its usual all-singing and all-dancing launch events at packed conference centres, but that’s not really Nokia’s fault.

Still, despite unveiling its newest phones via simple email press releases and low-key livestream announcements, its 2020 smartphones continue to impress. The Nokia 5.3, for instance, is a budget phone with not-so budget specifications and it sits comfortably among the best handsets we’ve reviewed in previous months.

On the other hand, its first-ever 5G phone, the Nokia 8.3 5G, sets its sights on fuller wallets. It’s perfectly poised to steal the mid-priced crown right from under OnePlus’ nose this year, but does it succeed?

The launch of Nokia’s first 5G phone actually happened way back in March, back when we were blissfully unaware that we’d still be under siege from COVID-19 six months later. At the time, Nokia provided a release window of “summer 2020” but Nokia missed its planned release schedule and we’re now into autumn. 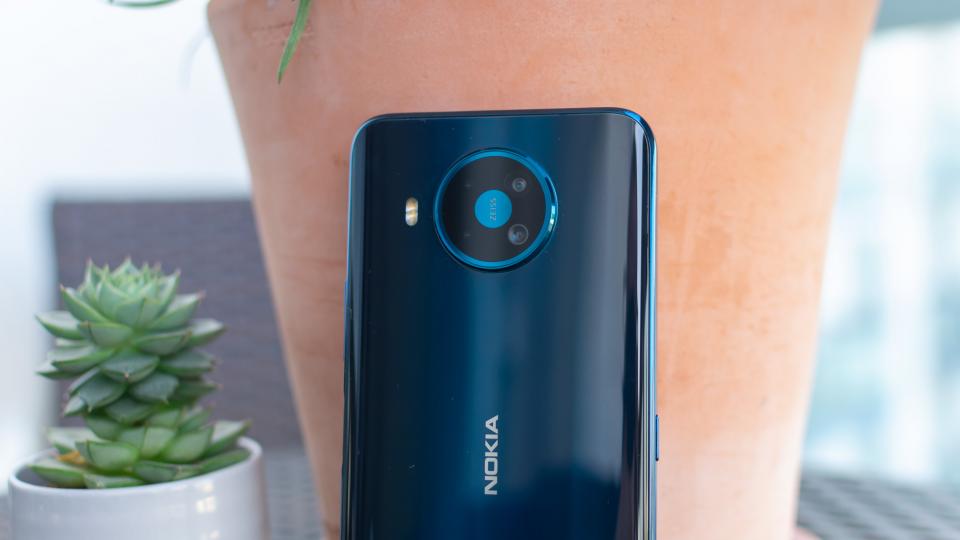 As for the specifics, the Nokia 8.3 5G is priced higher than most of Nokia’s usual offerings, and it has suitably dynamic specifications to match. It uses a beefy Snapdragon 765G chipset for 5G connectivity and processing duties, as well as a choice of either 6GB or 8GB of RAM and 64GB or 128GB of storage, depending on how much you’re willing to spend.

The Nokia 8.3 5G also uses a Zeiss-branded quadruple-camera array on the rear, which consists of a 64MP primary snapper, a 12MP wide-angle unit and a pair of 2MP depth and macro sensors. It’s Android One certified, too, which means it’s running stock Android 10 with the promise of at least two year’s worth of major upgrades (up to Android 12) and three years of monthly security updates.

That’s all pretty standard but the price is where the Nokia 8.3 5G starts to pull away from the competition. Starting at £500 for the cheapest model with 6GB of RAM and 64GB of storage, the Nokia 8.3 5G undercuts recent 5G releases such as the Samsung Galaxy Note 20, Oppo Find X2 Pro and Sony Xperia 1 II. 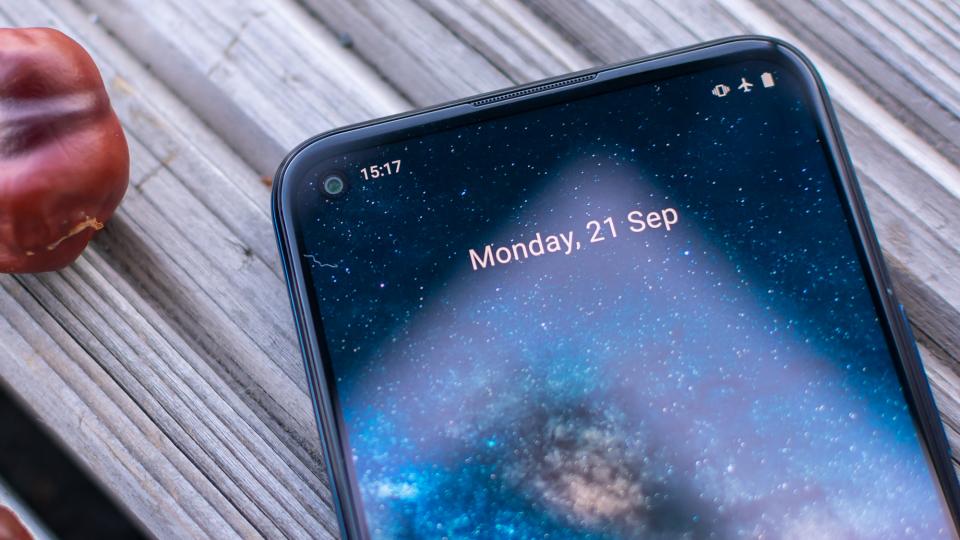 It isn’t quite as cheap as the cut-rate Moto G 5G Plus and Realme X50 5G – which both come in at £299 but it’s still very good value for a 5G phone in the overall scheme of things. Of course, you still have to pay quite a bit for a decent 5G SIM-only contract on top of that, where prices start at around £25/mth.

Design-wise, Nokia says the 8.3 5G continues the firm’s “Nordic design” heritage. As with Nokia’s previous mid-range phones, the Nokia 8.3 5G’s body is precision milled from a single block of aluminium, with a polymer composite layer applied over the top. There’s a fancy-looking reflective pattern on the back of the handset, too, which is supposed to resemble the Northern Lights.

On the front of the phone, you’ll find a simple hole-punch notch situated in the top-right corner of the Nokia 8.3 5G’s screen, which houses a 24MP selfie camera. Slim black bezels run along all four sides of the display, with Nokia leaving just enough space to squeeze its logo at the bottom. 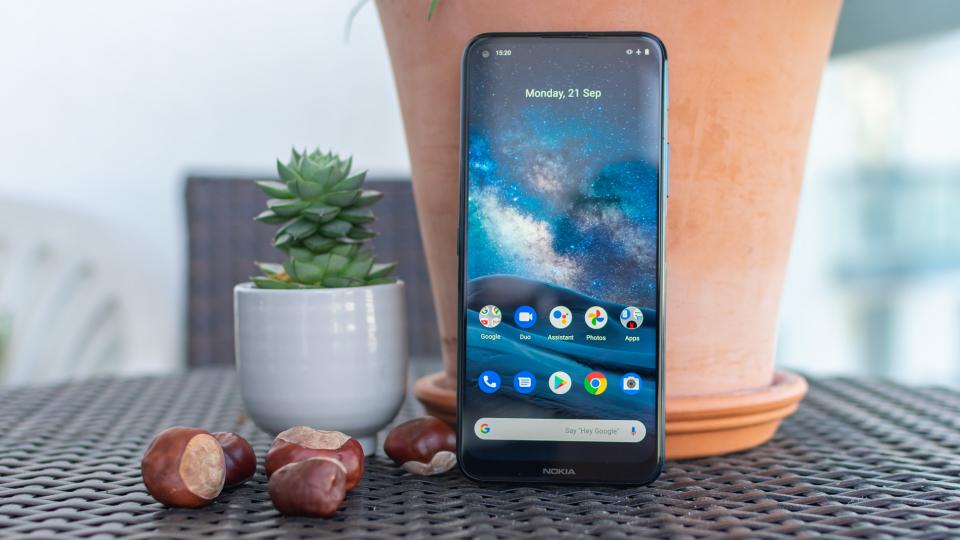 The power button, which can be found on the phone’s right edge below the volume rocker, also works as a fingerprint reader for secure unlocking. On the opposite edge, you’ll find a dedicated Google Assistant key, which can be disabled in the phone’s settings. Finally, a protective layer of Gorilla Glass is applied to the back and front of the phone; there’s no official IP-rated dust- or waterproofing, however.

As for the display, the Nokia 8.3 5G is fitted with an IPS panel measuring 6.8in across the diagonal, with a resolution of 2,400 x 1,080 and a 20:9 aspect ratio. Despite not being an HDR-certified panel, the screen will upscale SDR content to a near-HDR format, using the same upscaling tech that was first introduced in the Nokia 8.1.

Sadly, there’s no option to enable different display modes but what’s on offer here is quite good for the price. The Nokia 8.3 5G’s display covered 98.7% of the sRGB colour gamut in our testing, with a total volume of 122%. Colour accuracy within sRGB is on point, too, with a measured Delta E of 1.75 (lower is better).

Likewise, the screen is bright enough for sunny days, with a measured maximum luminance of 591cd/m² with the automatic brightness setting engaged and a torch aimed at the phone’s ambient light sensor at the top of the screen.

Most 5G-enabled smartphones don’t really have a lot of choices when it comes to base specifications, so you can probably guess what makes the Nokia 8.3 5G tick.

Inside the Nokia 8.3 5G is a Qualcomm Snapdragon 765G chipset, which is a special, gaming-centric version of the mid-range Snapdragon 765 SoC. This particular chipset is clocked at 2.3GHz and is geared towards more high-end graphics processing, using an Adreno 650 (the same GPU as the Snapdragon 865) instead of the Adreno 620 found on the regular 765.

Anecdotally, the Nokia 8.3 5G’s performance is swift enough but the benchmark figures point towards a phone that isn’t quite as powerful as the cheaper iPhone SE (2020) and its beefy A13 Bionic chipset. Likewise, the Moto G 5G Plus costs £200 less and also uses the Snapdragon 765G, delivering similar levels of performance:

Graphics processing was slightly more impressive, but yet again it paled in comparison to both the iPhone SE (2020) and OnePlus 8. Still, an average on-screen frame rate of 49fps in the GFXBench Manhattan 3 test isn’t bad by any stretch and it should do the job for most titles on the Play Store.

The Nokia 8.3 5G has a pretty hefty 4,500mAh battery, although it didn’t really translate to anything exceptional in our battery life test. Switching off all data connections, setting the screen brightness to 170cd/m² and running a looped video, the Nokia 8.3 5G went from full to empty in 12hrs 58mins. It managed to beat the iPhone SE (2020) by an hour and a half, but the OnePlus 8 and Moto G 5G Plus came out on top yet again.

Before moving on, it’s also worth mentioning that the 765G is bundled with a 5G modem, which is handy if you happen to live in an area that’s getting an upgrade in the coming months. Nokia says that this is the world’s first “global future-proofed 5G smartphone” too, supporting more 5G frequency bands than any other smartphone to date. This isn’t something I’ve been able to test, unfortunately, since I don’t have easy access to an area with a reliable 5G signal.

Lastly, let’s talk about the Nokia 8.3 5G’s camera setup. There are four Zeiss-branded cameras on the rear of the phone this year: a 64MP (f/1.9) primary snapper, which works with a 12MP (f/2.2) ultra-wide camera with a 120-degree field of view; a 2MP depth sensor for more effective blurred-background portrait shots, and a 2MP macro lens for close-up photos.

Although the primary camera can technically capture 64MP images, it actually takes 16MP pictures by default via a process called pixel-binning, which combines pixels into a lower-resolution image in an effort to reduce visual noise. It is possible to enable the full 64MP capture in the camera software’s ‘Pro’ mode if you want, though.

For this review, I directly compared with the same images taken using the OnePlus 8, which costs £50 more, and for the most part, I was impressed with image quality. Indeed, the Nokia did a better job at capturing more neutral-looking colours than the OnePlus 8, which has a tendency towards over-saturation anyway. The landscape shots captured from my balcony were filled with detail and the 8.3 5G did a fine job of boosting brightness without adding visual noise when the light began to fade.

The OnePlus gets the edge when it comes to macro photography, however, with the Nokia 8.3 5G struggling to focus and pick up finer details on the test object; for the purposes of this review, this was my rather tired-looking lavender plant. The Nokia 8.3 5G lacks the 2x telephoto sensor on the OnePlus, too, but the wide-angle camera did a good job at squeezing more stuff in the frame without sacrificing much detail.

The 8.3 5G can shoot 4K HDR video at 30fps, and there’s also a special “Action Cam” mode with super-steady stabilisation at 60fps at lower resolutions. I didn’t have an older Nokia phone on hand to directly compare but wind noise reduction is supposed to be more effective this year and you can also apply anamorphic video effects such as lens flare – JJ Abrams will be pleased.

The Nokia 8.3 5G is a noteworthy nudge towards the premium end of the spectrum and another solid addition to Nokia’s 2020 smartphone lineup. With a large display, cracking suite of cameras, eye-catching design and 5G connectivity for less, it should serve you well enough. 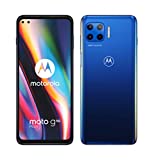 The biggest stumbling block, however, is that it doesn’t really take the crown in sheer value terms. If you’re strapped for cash and don’t mind a slight sacrifice when it comes to looks, then the Moto G 5G Plus is £200 cheaper, uses the same Snapdragon 765G chipset, has a more colour accurate screen and much longer battery life.