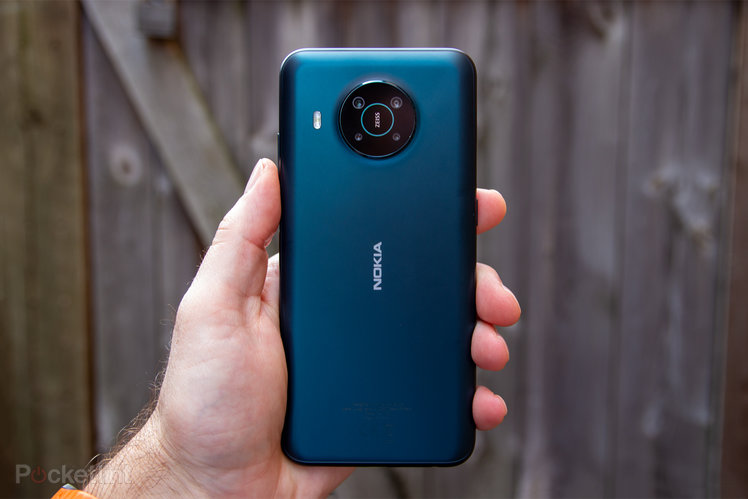 Nokia’s line up of phones was starting to get complicated with numbers and decimals, so in 2021, it decided to simply things with a C, G and X range of devices.

The Nokia X10 is one of these new breed of devices, with an X20 sitting alongside it and slightly higher specced.

Nokia says that the X series pushes boundaries and now represents a sort of top tier for Nokia devices. So what do you actually get?

When Nokia came back to the world of Android phones, it made a big deal out of durability. Phones were cast from aluminium blocks, designed to be solid, or at least, to avoid the plastic build of so many affordable phones. 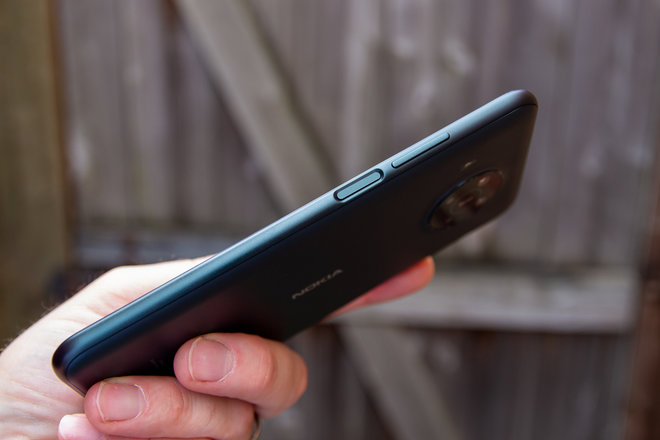 But this phone is plastic on the back, with two colours on offer, Forest (green) and Snow (white). It’s not just a flat colour, there’s some depth to it and it does look good, with a matte finish. There’s some shimmer to it as the light catches it – resulting in a phone that looks pretty good.

The rear of the phone is dominated by that camera array sitting in the centre, with the fingerprint scanner moving to the side of the phone, a la Sony. First impressions are that it works well enough, although we’ll see how that stands up as we use the phone more.

It’s a large phone and pretty heavy, but with a 6.67-inch display, that’s to be expected. There’s still some bezel around that display, especially across the bottom where the Nokia logo sits. 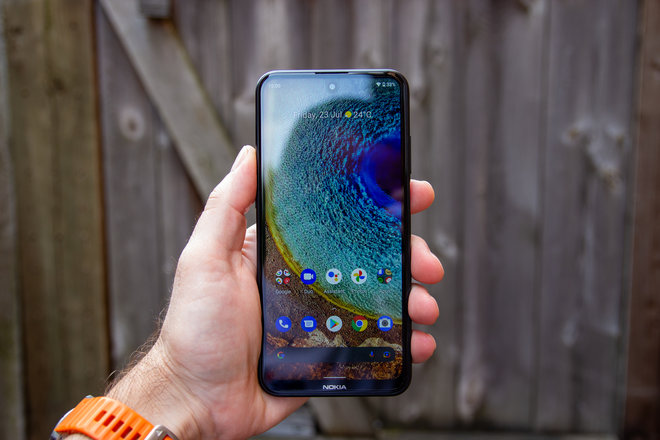 Not reaching to the edges of the phone body does lend a slightly cheaper look to the device and arguably, Nokia could have reduced the overall footprint by doing so.

There’s a factory fitted screen protector, although this appears to be leftover from Nokia’s waterdrop notch devices, as there’s still a notch in the protector, even though it’s a central punch hole here.

First impressions of the display are reasonable: we’ve not put much content through it to see how it performs, but there’s certainly plenty of space. It’s not as vibrant as displays higher up the smartphone food chain, but that’s to be expected. We’ll bring a deeper assessment as we use the phone more. 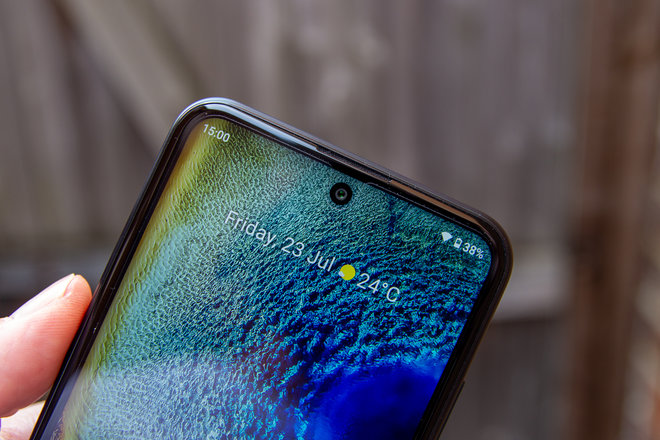 The fingerprint scanner doubles as the power button beneath the volume rocker, the opposite side of the phone sees a Google Assistant button.

On the base of the phone you’ll find the 3.5mm headphone socket which is welcomed for those wanting that ease of connection, while the speaker is also on the bottom. Early impressions suggest that it’s not great and this phone really misses stereo delivery.

It comes with a cable and compostable case in the box, there’s no power adapter supplied, all part of Nokia’s commitment to reducing its environmental impact.

Sitting at the heart of this phone is the Qualcomm Snapdragon 480 5G. This is an entry-level platform designed to give affordable access to the latest connectivity, 5G. The idea is that you don’t have to worry about lagging behind, because you’ll have those faster data rates – if not today, then in the future.

But Qualcomm has 5G offerings at many positions – in the Snapdragon 600 and 700 series – both of which are also used in some more affordable devices too. We’re going to be putting this phone through its paces to see how it performs in daily use, in gaming, in social media and entertainment, to see if it can keep up – but we suspect that lure of similarly-priced phones with higher grade hardware will lure people to other devices. 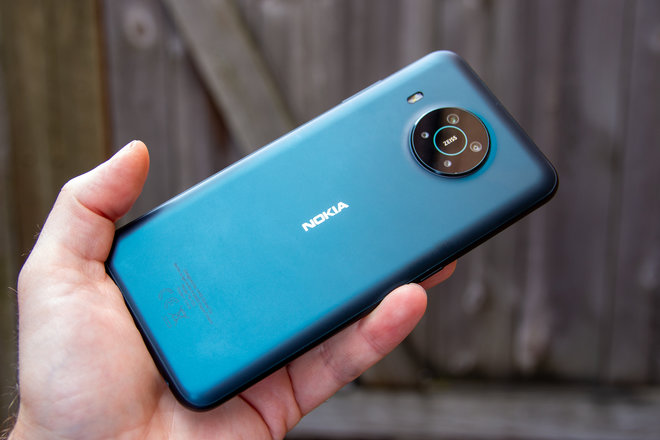 Such rivals include the Redmi Note 10 Pro or the Realme 8 Pro, where it looks like you’re getting more for your money. However, we’ll test exactly how this Snapdragon 480 phone performs in our full review.

The phone is dual SIM, or you can use microSD to boost the 64GB of storage.

There’s 4470mAh battery but we’ve not got to the point of testing its endurance. Once we’ve put this phone through its paces, we’ll have a much better idea of how the battery performs – and we’ll update you.

Nokia’s camera array on the rear of the phone is typical for recent phones at this price point. It leads with a high-resolution main sensor, here it’s 48-megapixels, relying on pixel combining to give you a final result. 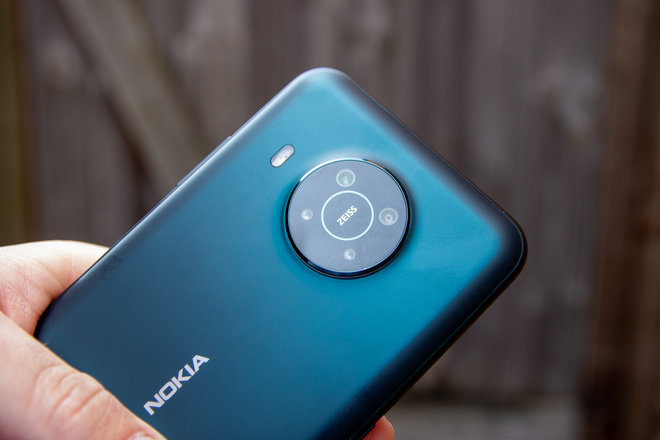 It’s supported by a 5-megapixel ultrawide camera, which might be useful – before you get to a pair of 2-megapixel sensors, one for depth and one for macro. We’re not expecting much from these additional lenses.

Previous experience of this sort of camera loadout doesn’t give us much hope, but we’ll be sure to test it fully and see how it performs.

Nokia used to write Android One on the rear of its phones and wear that as a badge of honour. You’ll still see Android One flash across the display when you start the phone, but the premise of Android One seems to have fallen by the wayside.

The idea was to give people stock Android phones, free from bloat, with fast updates. Nokia hasn’t been the fastest to update its phones over the last year and this phone isn’t free from bloat either – it comes with Amazon, Spotify and Express VPN preinstalled. We’re not even sure if that qualifies as Android One anymore. 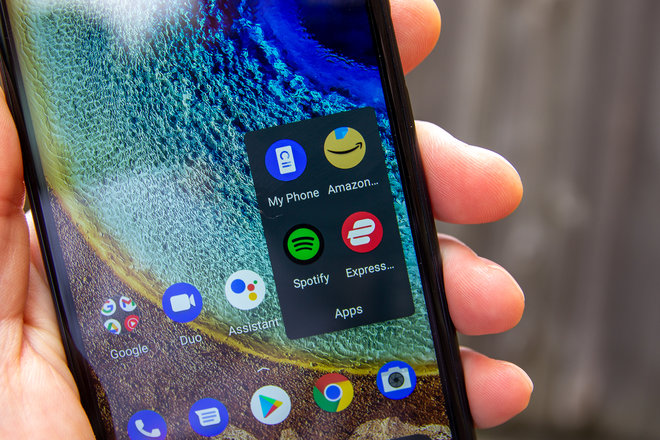 But Nokia is also promising 3 years of software updates for this device, which is good news, because you’ll probably have the software to keep you up to date through the life of this phone.

Exactly how smoothly it performs we can’t yet report, but rest assured, we will.