The OnePlus 10R is the company’s cheapest flagship phone on the market right now. With the recent discounts on the model, the phone has become pretty competitive in its segment, featuring an excellent display, powerful processor, and superfast charging. But how does it stack up against the new rival in town, the Nothing Phone (1)? That’s what we’ll find out in this specs comparison between the Nothing Phone 1 vs OnePlus 10R. 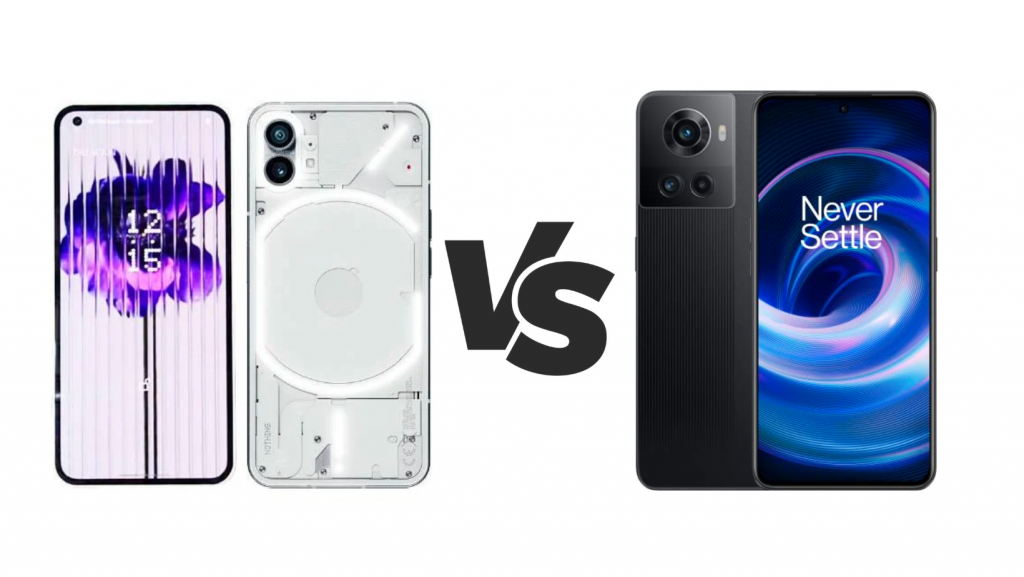 Personally, we feel the OnePlus 10R features a lackluster design, even with the additional elements on its back. On the other hand, the Nothing Phone (1) is arguably one of the best-looking smartphones in this segment.

So is there any room for the OnePlus model to shine in this department? Well, design is often a matter of perspective, and some would like the toned-down profile of the OnePlus 10R. But for most, the Nothing Phone (1) would be an obvious choice in terms of sheer design.

One of the biggest highlights of the Nothing model is the transparent back cover with a matrix of LEDs which the company calls the glyph interface. The white color model, which by the way is in great demand (and out of stock), offers a view of the internals like the wireless charging coils and the LED lights. Note that these LEDs are more than a neat party trick. The company has added a customized LED light-up sequence based on your ringtone and it can even show your phone’s charging progress.

Now coming to the OnePlus 10R, this model takes a very different approach with a boxy design with dual tone finish. To give the brand some credit, the two-tone finish and the camera design make it unique in its lineup. However, personally, we are not a fan of this boxy finish and we’ll leave it up to you to decide which one has a better design. There are two color options for the OnePlus 10R, Sierra Black and Forest Green.

Another drawback for the OnePlus 10R is the lack of any IP rating. What’s even more surprising is that this model also lacks the iconic alert slider found on all OnePlus flagships. In fact, even the cheaper OnePlus Nord 2T comes with the slider button on the side, so its really a shame that OnePlus decided to ditch it on the 10R. In comparison, the Nothing model features an IP53 rating and smartly utilizes the glyph interface for notifications.

The Nothing Phone (1) comes with a 6.55-inch OLED panel with FHD+ resolution. To compare, the OnePlus 10R features a much larger 6.7-inch panel. Both have HDR10+ support with Corning Gorilla Glass 5 protection and come with 120Hz refresh rate.
The OnePlus 10R comes with an excellent screen that gives the Nothing Phone (1) solid competition. In fact, this might be one area where the phone could outdo the Nothing model, but honestly, the difference won’t likely be significant. After all, both have excellent screens.

The Nothing Phone (1) comes with a mid-range Snapdragon 778+ processor. On its own, the chip is sufficient for daily use with occasional gaming. But when you compare it with the processors inside its direct rivals, you get the feeling that the computing power falls short. For example, the OnePlus 10R comes with the MediaTek Dimensity 8100-MAX featuring “AI performance boost”. While the “AI boost” might not translate to any significant performance upgrades in comparison to the standard version, the processor on its own is pretty powerful and will easily outdo the Snapdragon 778+ on the Nothing Phone (1). Especially if you are a gamer and looking for a phone in this budget, the OnePlus 10R would be a better buy for you, with good thermal control. That said, if you are not into heavy gaming, both the phones are going to serve you well.

The Nothing Phone (1) comes with 8GB and 12GB RAM models with up to 256GB of storage. The same is the case with the OnePlus 10R too.

The Nothing Phone (1) features Nothing OS on top of Android 12. On the other hand, the OnePlus 10R features the OxygenOS 12.1 build. Both the phones have limited bloatware with a smooth UI. But like most OnePlus models, you might encounter minor bugs in between. We can’t say the Nothing Phone (1) is perfect either, especially since it’s a first-generation model.

The Nothing Phone (1) comes with a two-camera setup, featuring a 50MP OIS main camera and another 50MP ultra wide-angle shooter. The OnePlus 10R also starts off with a 50MP primary camera but comes with a lower resolution 8MP ultra-wide shooter and adds a 2MP macro camera.
So far, we’ve seen that the Nothing Phone (1) can capture pretty good pictures with its primary and ultra-wide shooters, irrespective of the lighting conditions. The OnePlus 10R also features a pretty good primary shooter but might not be able to match Nothing Phone’s 50MP Ultra wide camera.

Battery is one more area where the OnePlus 10R outshines the Nothing Phone (1) in terms of sheer charging power. The most expensive variant of the 10R has a 4,500mAh battery with a massive 150W charger. Even the cheaper models feature an 80W charger (with larger 5000mAh battery) which makes the 33W charger on the Nothing phone look super slow.

Wireless charging gives a huge edge to the Nothing model since its a rare feature in this segment. One might settle for a 33W charger in favor of an additional and more convenient charging method.

If you care more about performance, display, and charging and are a fan of the OnePlus lineup, the OnePlus 10R would be good bet. On the other hand, if you want something unique with a fancy design, good cameras, IP rating, and wireless charging, the Nothing Phone would be the one to choose between these two.

Note that the Nothing Phone (1) is a first-generation model. The phone is likely to come with a few bugs or even hardware issues, so you need to consider these things when you make the purchase. Even if you are a Nothing phone fan, it’s probably a good idea to wait for a couple of weeks at least to see how the phone fares in real life.

Nothing Phone (1) vs OnePlus 10R: PROs and CONS