You are here: Home / Technology News / Now TV Smart Stick review: Is it still the best-value streamer in 2020? The Now TV Smart Stick finally has FHD streaming support. But is it too little, too late?

Sky’s Now TV Stick was an excellent product at launch, offering cheap and easy access to the Now TV service via a sleek £15 dongle. At the time of our initial review in 2018, it was the best-value streaming stick on the market, even beating out Amazon and Roku devices — in terms of price, anyway. It offered many great features, including an overhauled user interface that improved on the Now TV Smart Box, plus voice search through the bundled remote control. Sadly, the £15 Now TV Stick is no more.

If you want to buy a Now TV Smart Stick today you’ll have to go for the updated version, which costs £25. This model has a new colour scheme but that’s about it. It still comes with bundled remote control but, at £10 more than its predecessor, it’s not the bargain it once was. Has the Now TV Smart Stick had its time, or can its belated Netflix and FHD support keep it afloat?

Now TV Smart Stick review: What you need to know

This is Sky’s second attempt at a Fire TV Stick-like streamer, though as mentioned, there really isn’t much of a difference between this model and the first one. Powered by Roku’s OS, it’s a slender dongle about the size of a memory stick, which can be plugged directly into a spare HDMI port on the back of your TV.

Like its set-top box sibling, the Now TV Smart Box, it lets you watch Sky’s long list of TV shows, movies, kids and sports programming – provided you’re paying for the appropriate packages – and stream on-demand box sets and films. It’s also possible to use other streaming services such as BBC iPlayer, All 4, YouTube and, most importantly, Netflix. This model supports content playback up to 1080p, but there’s a caveat to that statement. When the old Now TV Smart Stick launched, FHD content was meant to be coming soon. It finally became reality in November 2019, in the form of Now TV Boost. Rather than adding FHD to the service as standard, however, Sky is charging an extra £3 on top of its normal pass fees. Without Boost, you’ll still get FHD streaming on other third-party apps that support 1080p playback.

It’s a shame that Sky decided to bump up the price of the Now TV Smart Stick from £15 to £25. Its affordability was previously its biggest selling point, and now it costs roughly the same as its key competitors. If you are set on the Now TV Smart Stick, it’s definitley best to opt for one of the pass bundles to save up to 37% on Now TV’s various entertainment packages. These can sometimes be found cheaper on Amazon. The most obvious rival is the Roku Express, a £30 streamer from the company whose OS powers the Now TV Smart Stick. It has a much wider selection of apps, including every service covered by the Now TV Smart Stick as well as Amazon Prime Video and Google Play Movies. Compared to the Express, Now TV’s stick seems pretty limiting.

At £30 you can also pick up a Google Chromecast, though that does require you to use a phone or tablet as a remote and has no user interface of its own, so it isn’t the most streamlined of options. Amazon’s excellent Fire TV Stick will set you back £40 but, crucially, it does not support Now TV. If you’re keen on Sky’s entertainment packages, that’s surely a deal breaker. If you can stretch to the £40 mark, it’s also well worth considering the Roku Premiere. It gives you everything that the Roku Express does and adds 4K and HDR streaming support on top. It’s the cheapest 4K streamer around, too, costing £10 less than the Amazon Fire TV Stick 4K.

Like the Roku, the Smart Stick plugs directly into your TV’s spare HDMI port and is powered by the supplied USB cable, which can either be attached to your TVs spare USB socket – provided the output is 1A or above – or the bundled mains adapter. There’s no supplied HDMI extension cable like with the Fire TV Stick, so you better make sure there’s plenty of clearance between the TV and your wall if you’re burdened with outward-facing HDMI ports. That said, setup is a doddle. Simply plug in the Stick, boot it up, choose your Wi-Fi network, enter the password and log in to your Now TV account. It’s that simple; you’ll be ready to go in a matter of minutes. The Now TV Smart Stick comes with a compact Wi-Fi remote that can be used to control the power and master volume of your TV. Unless you disable the feature, it will take you straight into the Now TV Smart Stick platform when you press any of its rubberised buttons, saving you the hassle of skipping sources. The remote also includes a similar voice-search feature to Amazon’s Fire TV Stick and the Apple TV. Simply press and hold the microphone button on the face of the remote control and you’ll activate the voice-search features.

Voice search works as you’d expect and, for the most part, it had very few problems correctly identifying my incessant commands. The search isn’t universal, though. You can navigate to specific apps by simply saying their names, but it won’t register requests for shows that aren’t on Now TV, so you can’t ask it to play ‘Pandemic’ or ‘Stranger Things’ even if you’ve logged in to the platform’s Netflix app. Lost your remote? Install Roku’s official app from the Play Store and you can control your Now TV Smart Stick from your smartphone. I had my Google Pixel 3a set up as a secondary remote in, quite literally, seconds. No login is required: you just need to make sure your phone is on the same Wi-Fi network as the Smart Stick – remembering to turn off VPNs – and away you go. I almost prefer using the mobile app, as it really speeds up the process of jumping between apps.

The Roku-powered interface itself is blissfully clean and simple, with a straightforward main menu that has six shortcuts on the left and various pieces of promoted content on the right. Unless you want to change your settings or browse the TV guide, there’s no real need to leave the Home section, as all the Now TV packages and third-party apps are at your disposal from there. It’s all pretty standard stuff, but there’s certainly room for improvement. For instance, the TV guide only displays what’s showing now and what’s on straight after; there’s no way of finding out anything beyond that. Likewise, you can’t use the search function for specific live channels. An improved universal search function would have been most welcome here, as there are so many apps to sift through.

There’s an awful lot of content here, broken down into individual passes that have their own separate costs. The popular Entertainment pass costs £9/mth, the Cinema pass can be picked up for £12/mth, and the Kids pass is £4/mth, as is the Hayu reality TV package. These prices are higher than at the time of our 2018 review, but only marginally.

Elsewhere, the Sky Sports pass remains the cheapest way to access Sky Sports. Currently, you can choose from three flavours of Sky Sports Pass for TV: daily, weekly or monthly at £10, £15 and £34 respectively. That’s perfect if you only want to watch the odd Premier League match and don’t want to get bogged down with a pricey Sky Q subscription. There’s also a mobile-only Sky Sports pass that costs £6/mth. 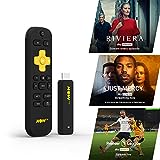 Our biggest criticisms of the original Now TV Smart Stick were all to do with performance. In 2020, some of these problems have been ironed out, but I wouldn’t say it’s crease-free just yet. The first bit of good news is that you can download shows and movies onto the Now TV app on your phone or tablet for offline viewing, something you could not do at the time of the first Smart Stick’s launch. Now TV also gives you the ability to pause and rewind on Sky’s live channels, another feature that has been added since our initial review. 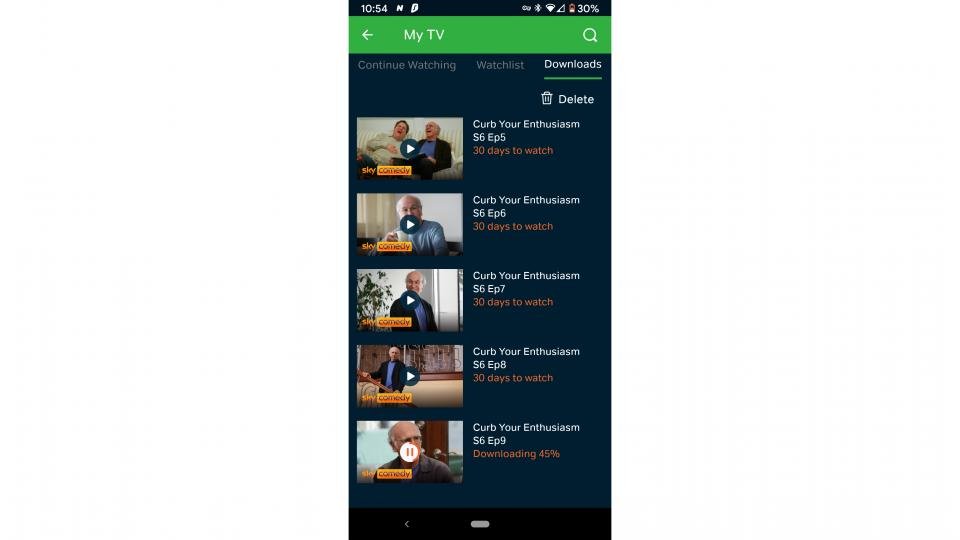 More importantly, it’s now possible to watch Now TV in 1080p by paying for Now TV Boost. At an additional £3/mth, the majority of content will be playable in FHD resolution. Much of this content, mainly movies and recent TV shows, also support Dolby Digital 5.1 for those with a compatible soundbar or surround sound system.

It’s easy to identify the content which supports 1080p or Dolby Digital, as the ‘HD’ and ‘5.1’ symbols will appear alongside the age rating. All Sky Sports channels are now available in 1080p too and, on six of them, you can enjoy playback at 50fps. Unless you have an LG TV, for some reason.

To test out 1080p I watched several movies and shows, including Chernobyl (on the Entertainment pass) and Godzilla: King of The Monsters (Cinema pass), jumping between my Boost account on the Now TV Smart Stick and a separate non-Boost account on my 4K Samsung TV’s Now TV app. Obviously the 4K TV was upscaling Godzilla (sorry) in both cases, but on the Boost account, the action did look that little bit sharper, especially noticeable during the monster close-ups and on the full-screened sweaty brows of the cast.

Is it so stark a difference that it’s worth an extra £3? Maybe, yes. A more pressing issue is the lack of 4K and HDR support for Now TV content. Now that would be worth another three quid. Now TV is still a long way behind the competition when it comes to streaming quality, with Netflix offering 4K HDR playback on its premium subscription and Amazon Prime Video including it as standard.

Now that the majority of smart TV platforms have the Now TV app onboard, you might wonder why you should bother buying a Now TV Smart Stick at all, even if you are keen on Sky’s services. I definitely prefer Now TV’s remote and Roku-powered OS to those of my Samsung TV, but having to exit the Smart Stick to watch 4K HDR Netflix is still a pain. And so is having to pay extra for FHD playback, for that matter.

Who should buy one, then? If you don’t subscribe to Amazon Prime Video or 4K Netflix, it’s a nifty way to browse your content in one place, and if you want Now TV services but your TV lacks the app then it might be worth considering too. Then again, you could always buy the Roku Express for £5 more, granting you all of the same features plus access to Amazon Prime Video and more. Had Sky kept the Now TV Smart Stick at £15, it would be the best-value streamer out there. At £25, it just isn’t.