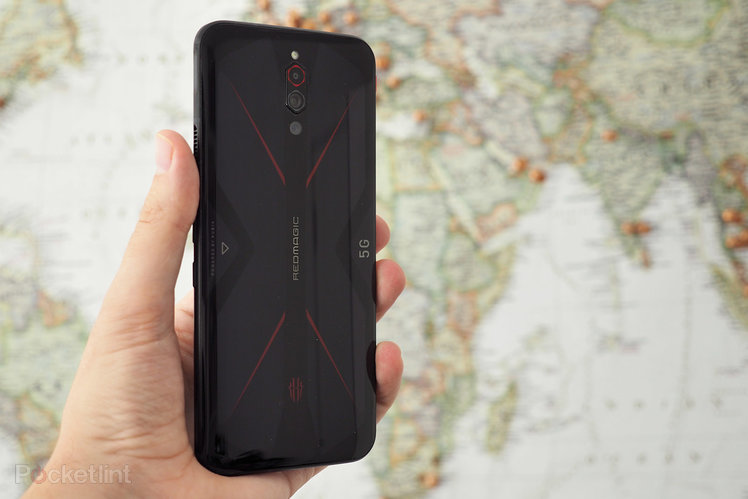 There was a time when phones were designed just to make calls. These days, they’re pocketable personal computers with the power to handle work and play. In the case of the latter, sometimes to the extreme – which is the whole idea behind the Red Magic 5G gaming phone.

Red Magic has been busy in the gaming phones space for some time (we last saw the Red Magic 3). Nubia is the company behind this phone, which in turn makes it a ZTE phone. That’s a name you rarely hear in Europe these days, as the Chinese company has been at somewhat an arm’s length.

There’s no doubt that the Red Magic 5G ticks all the spec boxes – the first 144Hz display in a phone, the top-end Qualcomm SD865 – at a very attractive price point (£539/€579/$579). But beyond its clear gaming credentials, does the company’s lack of experience in the consumer space in this part of the world impact the overall experience?

What’s special about the RedMagic design?

The Red Magic 5G wears its heart on its sleeve. There’s no doubt that this is a gaming phone through and through, what with its light-up logo to the rear, fan vent openings to the side (it’s not waterproof, no surprises there), and red accent marks giving it that established air of ‘gamer’. 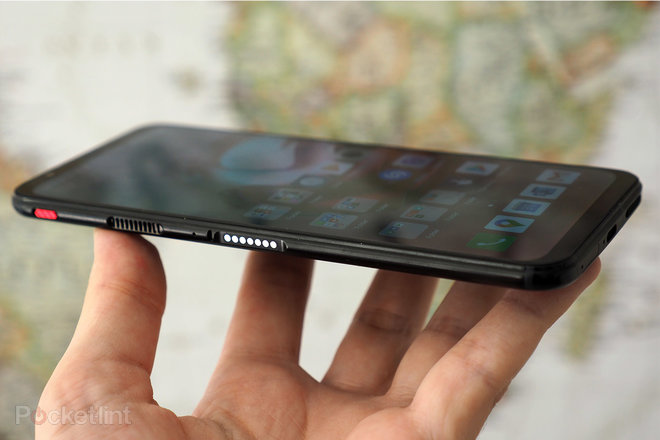 It’s a fairly chunky beast, at almost 10mm, but that’s on account of its fan cooling system, large battery capacity, and big screen size. It’s a little bit of a struggle to reach across the virtual keyboard one-handed, but who realy cares? This phone is all about focusing on two-handed gaming fun.

That’s why you’ll see two flat areas to one side: these are the built-in shoulder trigger buttons, keeping that focus on gaming. It’s a subtle implementation too as, in normal phone use, you don’t notice these triggers – which don’t physically move, they’re only based on forced press contact – proving that the Red Magic can morph between everyday phone and gaming phone no problems.

If you really want to get the most out of the Red Magic 5G then you’ll want to buy into the accessories. There’s a ‘Pro Handle’ protective case, onto which you can connect controllers of the same name. The price isn’t too steep either, meaning this is a great way to turn your phone into a kind-of handheld console. We’ve not had these in for review, however, so can’t comment on their build or practicality. 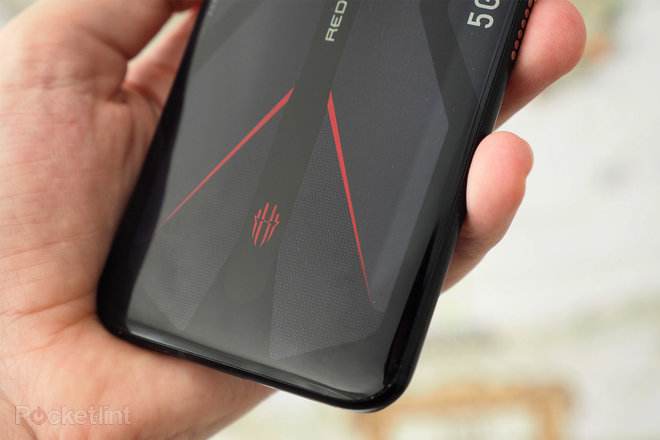 We did have a few teething problems with Red Magic’s software, however, which delayed us getting started on this review. Such software bugs have been ironed out by the company, but the Red Magic OS (v3.0, skinned over Google’s Android OS) always feels a little fussier than a stock Google Android.

Things like notifications are excessive, not customisable to the right extent – and its these details which begin to grate. Furthermore the addition of ‘Colorful Light Effects’ – which can be easily switched off within the settings – becomes a distraction to excess for us. At least it’s customisable, though, so you can decide just how jazzed-up your Red Magic 5G can be. Other points, such as the alarm not sounding when in silent, or the fingerprint scanner being a generation behind in its responsiveness, show the lack of detail in the small-yet-important areas. 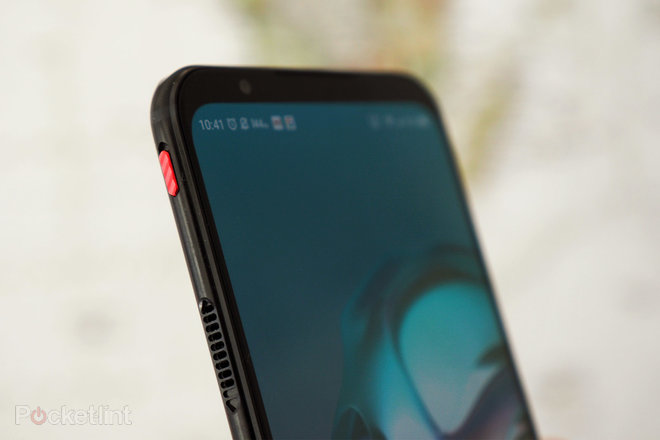 The handling of the gaming side of things is rather eloquent though: there’s a dedicated Game Space physical switch to the top edge of the phone. Simply flick this and, after an unnecessary animation, you’re taken into the Game Space where you can customise notifications, fan control, arrange your games, switch on Do Not Disturb, and such like. That’s the meat and potatoes of a gaming phone, so it’s handled well here.

Is the RedMagic’s 144Hz display noticeable?

A huge part of the Red Magic 5G appeal is its 144Hz screen. Nowhere else on the market will you find a higher refresh rate panel in a phone (although we’re sure it’s only a matter of time). 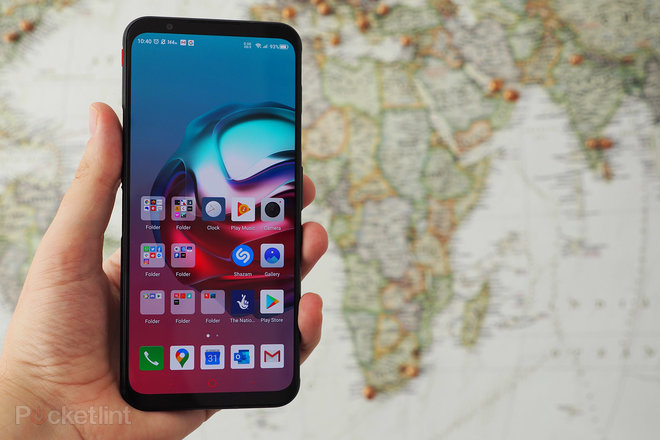 Typically speaking phones have a 60Hz refresh rate, i.e. that’s how many times per second they cycle through a screen. A number of devices, such as the Huawei P40 Pro, up that to 90Hz – which is a 50 per cent boost. Then the OnePlus 8 Pro (among others) went to 120Hz – doubling the typical refresh rate.

Now, here’s the thing. The principle of all this makes theoretical sense, because “more equals better”, right? But, in practical terms, there’s only so much difference that your eyes and, in turn, brain can decipher. For us, therefore, we fail to see the jump from 60Hz to 90Hz or 90Hz to 120Hz. So it’s a bit of a hype train.

At lower refresh rates it’s a different ball game. You watch a 24fps Hollywood movie and it looks distinctive. Watch that processed with frame interpolation at 60fps and it’ll look like a soap opera (hence ‘the soap opera effect’). Watch a 120fps HFR (high frame-rate) movie like The Hobbit or Gemini Man and, well, it doesn’t look Hollywood, it looks like people in fancy dress wandering about in front of you – it’s undeniably smooth. 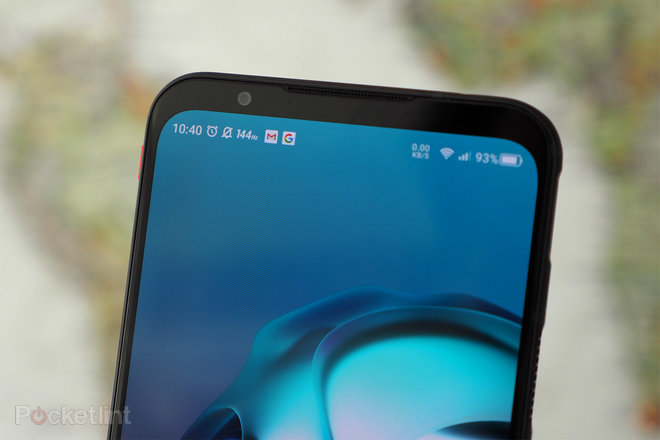 Some people may see a difference in various instances on the Red Magic 5G, but that’s down to individual acuity. We can in some instances, such as when scrolling through a Twitter feed. Certain games – although they need to be able to uphold the running frame-rate, which is no small ask – also offer additional smoothness, but we just don’t notice it. Will you see the difference between 120Hz and 144Hz? No. Will you between 60Hz and 144Hz? Yes, perhaps.

The other argument for high refresh is the response time. Here the screen has a 240Hz touch sampling rate, meaning your touch will be picked up in 2-milliseconds. Assuming the software is then channeling that data and pushing it to a game server as rapidly as possible – here aided by Wi-Fi 6 and 5G connectivity potential – then that could, again theoretically, have a benefit. But, again, we don’t think most people will notice.

All that said, the Red Magic 5G has a decent enough screen. There’s no notch to get in the way. The resolution (FHD+) is ample without going overboard (some will argue it needs more pixels, though, which is fair criticism). The brightness (600 nits maximum) makes for punchy viewing. Colours look decent too. AMOLED means rich blacks. 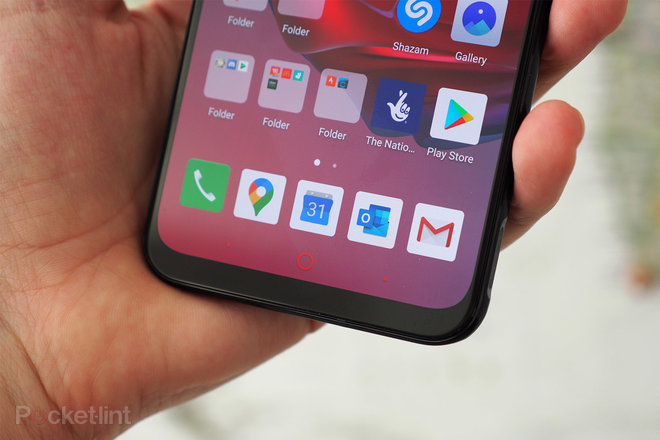 We get the need to promote 144Hz. It’s a big deal because it’s currently a unique proposition – which is a word we don’t get to use often. But it’s the scale, the panel technology itself, the brightness, that are the key aspects here.

Does the RedMagic really perform better at games?

As we’ve touched upon in the above text, the Red Magic 5G really doesn’t cut any corners when it comes to power and, therefore, gaming prowess. The Qualcomm Snapdragon 865 processor at its heart makes sure of that. Our review model comes with 8GB RAM, but a 12GB variant (in Hot Rod Red and Pulse colour options only) is also available – both being LPDDR5 RAM and UFS 3.0 in on-board storage terms. 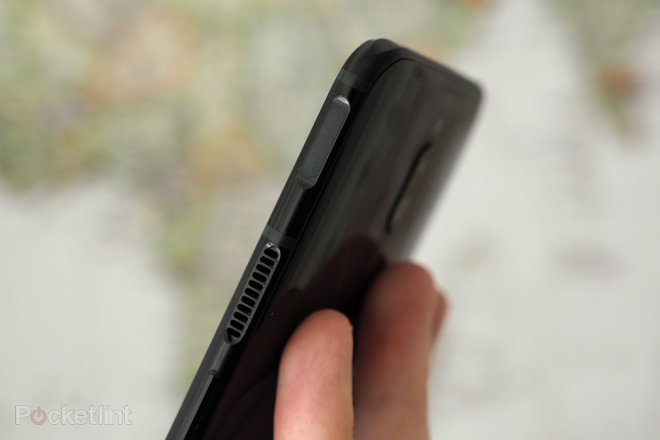 That’s not all, the Red Magic 5G also comes with a fan cooling system. Well, it’s not just a fan, there’s also a liquid cooling pipe to aid the system’s cooling graphite pad, thermal conductive copper foil and thermal gel. Can’t say you’ll get that in many other phones.

This is why the Red Magic 5G is rather thick in build terms though. In order to aid heat dissipation – the result of clocking that processor hard for sustained periods – you need more space, more thermal solutions. It’s a trade-off that you’ll have to consider if a gaming phone is what you want. But this device can still get warm. Oh, and the fan is irritatingly loud when it needs to kick in – no surprise, given its five-figure rotations per minute accolade.

All of this does make for a phone that can handle that bit more. However, a bit like the screen’s one-upping in the refresh rate department, whether you’ll ever really, truly need this much power is up for question. A lot of flagships offer it in a normal-sized body minus the cooling system. We can see that the Red Magic 5G can go one better, it’s just whether you’ll really need it to. 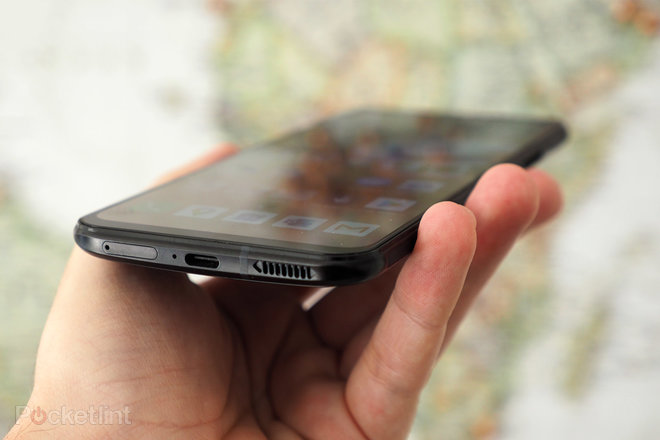 The big benefit of that extra space and cooling, however, can be felt when it comes to battery life. The 4,500mAh cell in this phone is large as these specs go, which is great news. Even with 144Hz turned on all day long, a full day of work, and a dabble in some gaming sessions, we were going to bed with over 50 per cent battery remaining. On a long 18 hour day we still had above 30 per cent remaining.

Go hard on the gaming and, of course, the battery will be drained all the quicker. There’s an 18W fast-charge facility, though, so top-ups are reasonably fast. The Red Magic can recharge much quicker, using a 55W Quick Charge plug, but that’s not included in the box (and in the UK we can’t see it offered on the official website either).

Connectivity is an often overlooked aspect. Here, the Wi-Fi 6 standard is so much quicker to download patches than a lesser system, it’s great to have on board. We’ve been unable to test 5G networks due to our lockdown status at present, as no networks are nearby.

Overall, then, the Red Magic 5G offers masses of power, speedy connectivity, cooling that aids battery life, delivering longevity that easily crunches through a day. Given the asking price, that’s an astounding performance.

What about the cameras?

While a lot of phones are going camera crazy of late, chucking all manner of lenses onto the rear, the Red Magic 5G keeps things a little more simple. Although it’s described as a triple camera system, you won’t see use from the depth sensor from what we’ve seen, while the wide-angle camera is hidden within the Pro settings and therefore also impractical to use (pinch-to-zoom doesn’t activate it).

What you do get is a 64-megapixel main, utilising the Sony IMX686 sensor, which has been used successfully in other top-tier devices. In this instance, however, it’s the processing that lets things down a little. Sure, there’s the resolution to deliver detail (at 16MP, a result of using four-in-one oversampling), but the default contrast is far too high and the optics see things soften towards the edges – which is where detail diminishes.

As a main sensor it’s fairly adept. The autofocus is snappy and live updates on screen. Even limited light isn’t too much of an issue for this sensor, if you can handle a little bit of grain within a shot.

Just don’t anticipate the range of options, the simplicity of additional modes, or a proper zoom lens like you’ll find in many other camera-phones these days. Although, if you’re busy gaming, we don’t see the need for a lot of these added extras anyway – as the main sensor does it job adeptly enough.