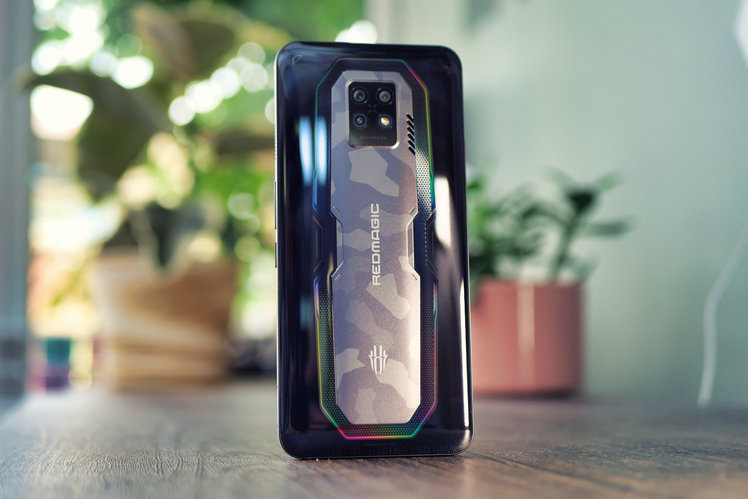 Continuing its tradition of releasing gaming phones at a lightning pace, RedMagic is back with another powerhouse, the 7S Pro.

On the surface, it looks a lot like the RedMagic 7 Pro, but there have been numerous internal updates here – including a jump to the latest Snapdragon 8+ Gen 1 processor.

This means we’re expecting serious performance, but how does it perform in the real world? We’ve been testing to see this latest model to see how it fits in.

As usual, there are a variety of finishes available for the RedMagic 7S Pro, and these different finishes come with different specs. We’re testing the most affordable model, which comes in the Obsidian colourway. The rear has an extremely glossy black finish, with an exposed aluminium strip running down its spine. The strip has a fairly subtle camouflage design, which we’ve not seen on previous models, adding a bit of uniqueness to the 7S Pro. 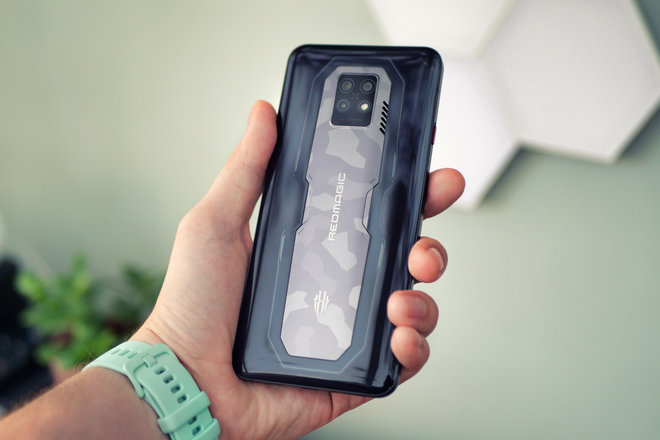 Encircling the aluminium stip is a mesh-effect design with an iridescent finish. In most lighting conditions, it appears to be dark grey, but, when the light hits it just right, it shines in a rainbow of colours.

Speaking of rainbow colours, there are two addressable RGB accent lights at the phone’s waist. These are fairly well utilised in the software and will illuminate to indicate charging status, flash with notifications or phone calls, or just to create some gaming ambience. They may not be as in-your-face as the glyphs on the Nothing phone, but they’re plenty bright enough to get noticed in the majority of lighting conditions. 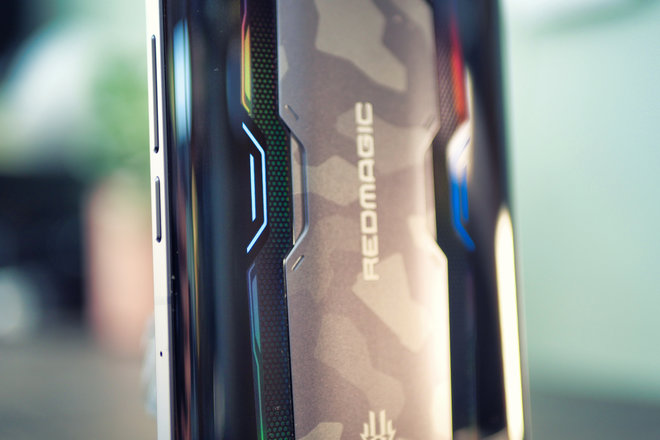 Just like the 7 Pro, there is a flat aluminium bumper around the device, reminiscent of the iPhone 4. All in all, the device feels solid and premium, but it has quite a bit of heft to it – and you’ll definitely feel it in your pocket.

It’s worth noting, too, that the high-gloss rear panel is pretty slippery. So, you’ll need to hang on tight to avoid dropping it or use the included transparent TPU case, which is very grippy. 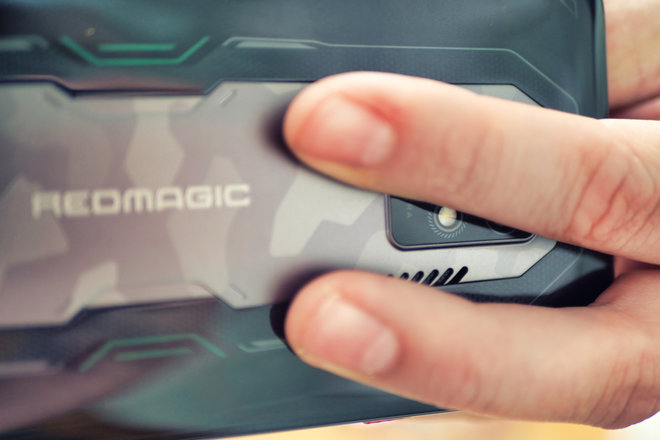 While we’re quite keen on the phone’s looks, the TPU case is less attractive, in our opinion, and you’re unlikely to be finding many third-party options. However, we’re told RedMagic will be releasing at least one premium option through its online store, so look out for that.

One aspect of the design that initially worried us was the placement of the vents. On the RedMagic 7 Pro, we found that the exhaust on the rear panel would blast our ring finger with hot air while gaming, which made it a bit unpleasant to use. The 7S Pro has the vent positioned in a similar location, however, now, it acts as an air intake, with hot air only being ejected from the top of the phone. For us, this is a massive upgrade in terms of usability, and we’re happy to see the issue addressed.

The display on the 7S Pro is the same as its predecessor, and, thanks to the use of under-display camera technology, it offers an uninterrupted full-screen gaming experience. A 120Hz refresh rate keeps things looking smooth and the 600 nits peak brightness, which doesn’t sound overly impressive on paper, was more than sufficient for our daily usage. 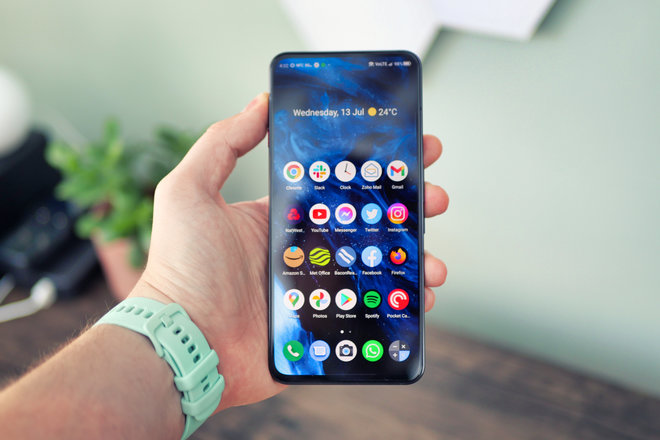 The under-panel camera makes more sense on a gaming phone than most other devices, as a punch-hole camera or large notch can get in the way of your gaming session – and no one wants that. However, it does bring with it some compromises.

You may have noticed that both the 7 Pro and 7S Pro see a slight downgrade in display specs compared to the older and cheaper RedMagic 7, which offers a higher 165Hz refresh rate and 700 nits peak brightness. We can only assume that this is in order to accommodate the under-display camera. 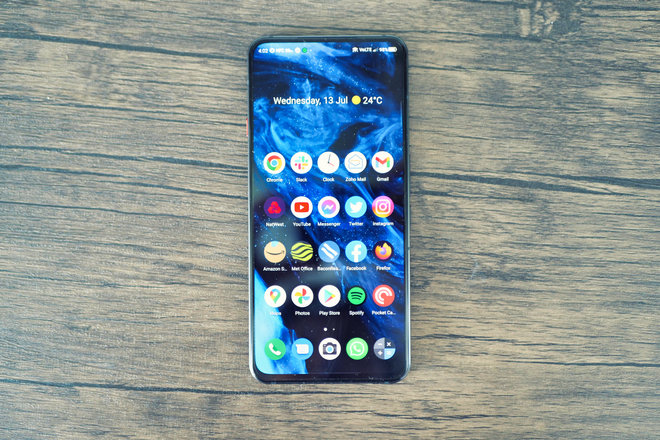 However, in the real world, the majority of titles fail to take advantage of refresh rates exceeding 120Hz, and, as we mentioned, 600 nits is plenty bright for most scenarios. So, the loss is minimal, and the look is undeniably modern and sleek.

The speakers can get incredibly loud, but they lack low end, resulting in a fairly bright sound. They’ll get the job done, and the stereo imaging is welcomed, but after getting used to the impressive speakers on the Black Shark 5 Pro, we were left slightly underwhelmed by the performance.

With the RedMagic 7S Pro, the star of the show is the Snapdragon 8+ Gen 1 processor, and this addition is what sets it apart from its predecessor. It’s one of the first gaming phones to hit the market with this chip, and certainly the first with onboard active cooling, so it’s an exciting model for performance seekers. 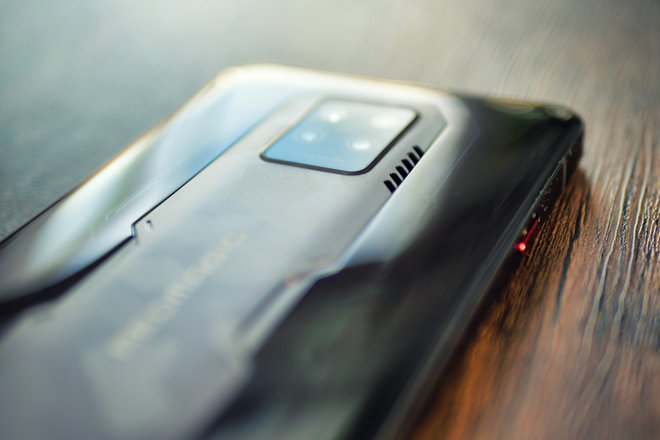 In benchmarks, there’s a notable performance increase with this SoC, but. in practice, we couldn’t tell much of a difference from the Snapdragon 8 Gen 1. Still, it performed flawlessly throughout our testing, allowing us to max out settings on every game that we tried.

The improved cooling, meanwhile, is much more noticeable. While the 7 Pro got very hot during extended gaming sessions, the 7S Pro stays much cooler, making it a far superior gaming companion. 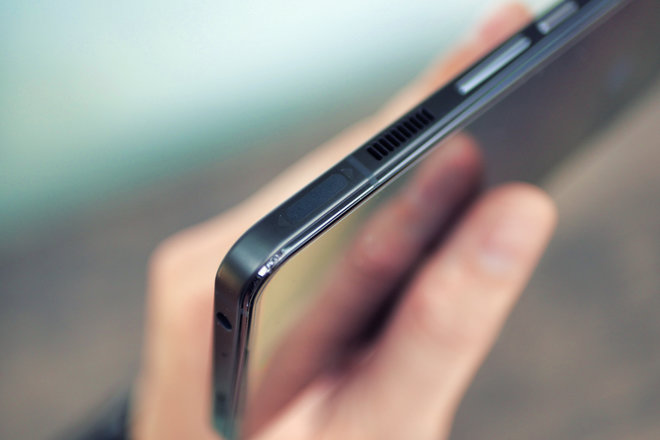 It’s not just performance that the new chipset offers, though – it also brings with it a host of other benefits. One of the most important is increased efficiency, allowing the battery to last longer, which is crucial on a device like this. There are also improved low-latency Bluetooth features thanks to Snapdragon Sound, though the headphone jack is, thankfully, present on this model.

The battery easily got us through an average day’s use, meanwhile, and, on days when we weren’t gaming, we’d sometimes go to bed with 40 per cent (or more) charge left. It’s very serviceable.

Of course, gaming significantly lowers that lifespan, but the included 65W GaN charger gets you back up to full in about half an hour. 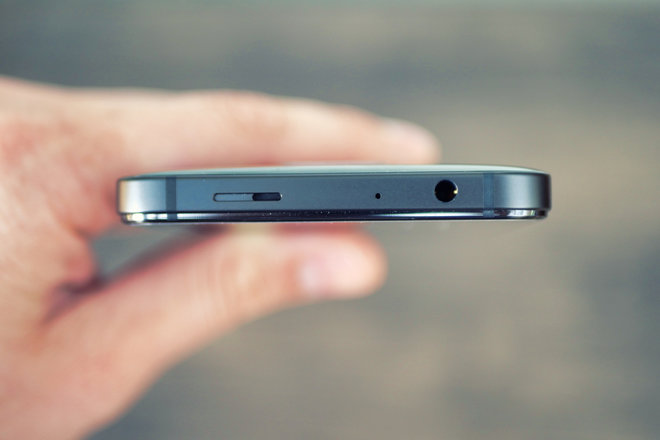 When it comes to software, it’s a similar story to the last few RedMagic phones that we’ve reviewed. The overall experience is a positive one; we didn’t run into any major glitches in day-to-day use, and there’s not much in the way of bloatware.

Meanwhile, the gaming options are among the most comprehensive that you’ll find on a smartphone. If you enjoy tweaking settings, you’ll be delighted at the level of configuration offered here.

The only shortcomings on the software front are the occasionally poorly translated system messages, which do take away from the premium feel but are still usually easy enough to understand. The system also registered our Zoho email app as a game, for some reason, and we struggled to find a way to correct it. This meant that we’d go to read an email and the phone would ramp up the fan and turn on the RGB lights, which was pretty funny, if also a little irritating.

The rear cameras are unchanged from the last few RedMagic phones that we’ve reviewed, and, as is usually the case, don’t seem to be a major priority on this gaming-focused device. 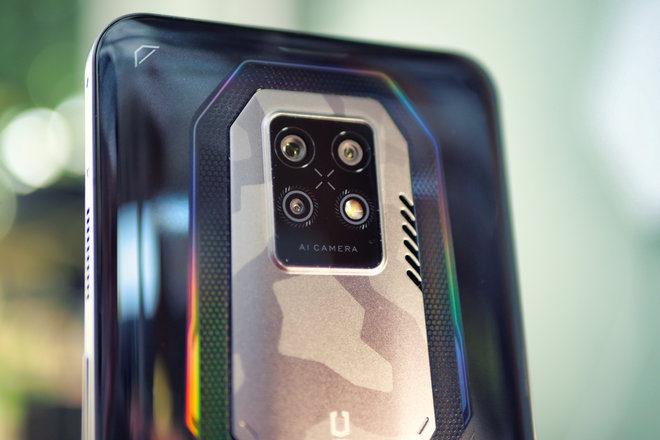 What this means is that you have a decent, capable primary camera that’ll give you satisfying results when the light is sufficient. This is paired with two auxiliary lenses that should mostly be avoided. The macro is extremely low resolution and doesn’t focus as close as you might expect, while the wide lens lacks sharpness, and also struggles to focus on close-ups.

Video, when shot at 4K or 1080p resolutions, delivers good results. There is nice stabilisation and fairly reliable autofocus on the primary camera, and you can even crank it all the way up to a whopping 8K resolution. However, doing so sacrifices image stabilisation and introduces some horrific rolling-shutter, so we’d stick with the standard resolutions.

The selfie camera is the most interesting, we think, thanks to the fancy under-display technology. But, as we found on the 7 Pro, it’s not very usable. When looking at the live view, it appears as if there’s a big greasy fingerprint smudge over the lens. Everything is slightly blurry and light sources bloom.

Of course, no one wants a photo that looks like that, so RedMagic applies some extreme sharpening to combat the muddiness of the camera. It works, but it results in very unflattering images with a kind of cartoonish uncanniness about them. This is, unfortunately, the price you pay for an uninterrupted display.