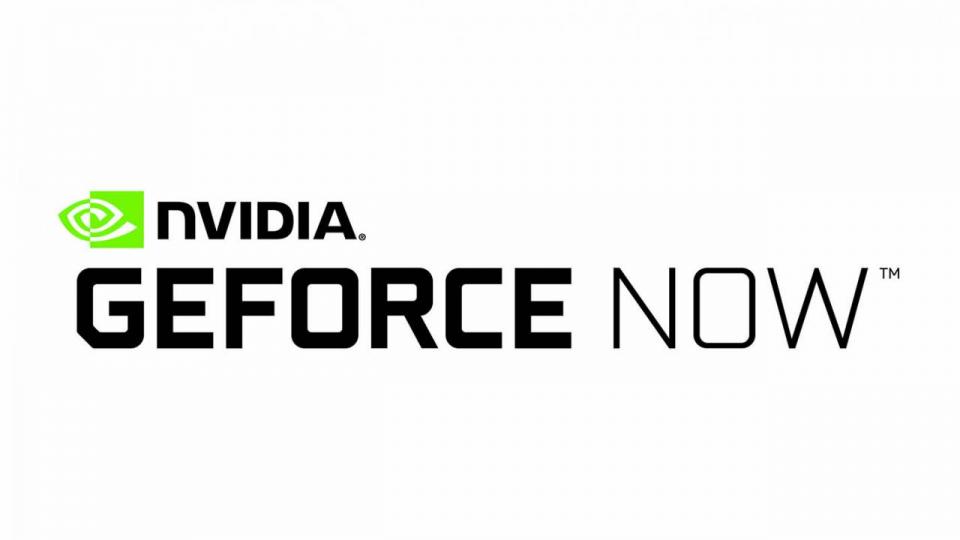 Despite feeling like it’s held together with duct tape, GeForce Now is the only game streaming service avid PC gamers should consider

On paper, GeForce Now is an excellent idea. It’s a cheap game streaming platform built by a well-known PC gaming brand that has access to an impressive catalogue of titles and some unique technology. It should have Google frantically rolling out content updates for Stadia. So why haven’t you heard of it?

The answer is simple: Nvidia hasn’t been crowing about it. GeForce Now has only just exited a two-year beta testing period, during which time Google Stadia has dominated the headlines. It’s available to the general public now, however, which means it’s time to put it through its paces. And one thing is immediately clear: it’s shaping up to be a strong contender in the nascent race for best games streaming service.

Nvidia GeForce Now review: What you need to know

GeForce Now straddles the line between Google Stadia and Shadow in that you’re essentially leasing out an Nvidia gaming PC to stream games to your phone, tablet, laptop or desktop. There are a small number of free games available on GeForce Now, but to play any of the other supported titles you must already own them on Steam, Epic Games or Uplay – this is one of the ways in which it differs from Stadia, which has its own content store.

Working out exactly how many games GeForce Now supports is difficult, but we can say that – at the time of writing – you won’t be able to play any titles published by EA, Activision/Blizzard, Capcom, Square Enix or Bethesda. You can use this page to check whether any of your games are supported. 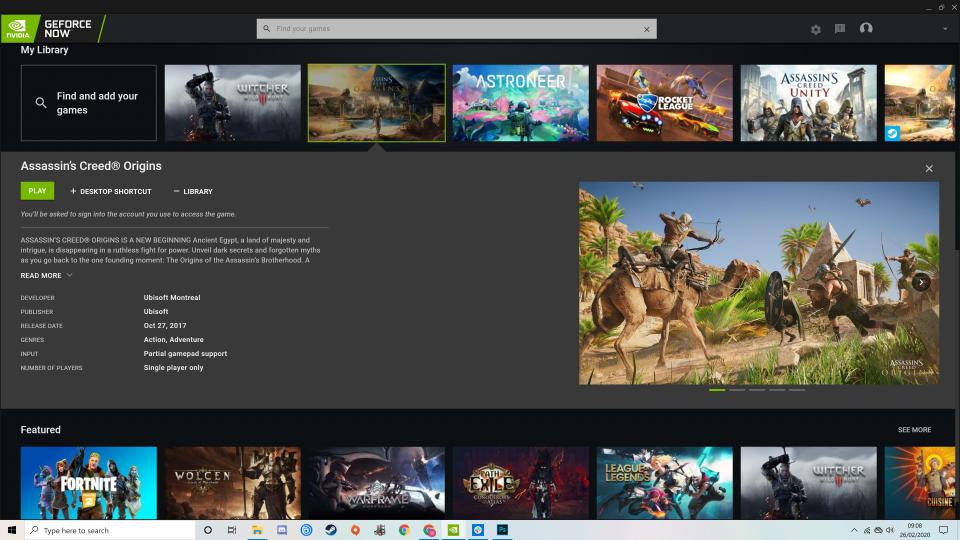 You can download the GeForce Now app on your Windows PC/laptop, Android phone or Mac (no word yet on an iOS app). If you have a Nvidia Shield TV of any variety, moreover, you’ll be able to launch into GeForce Now simply by logging in. Most games support mouse and keyboard and/or gamepad; compatibility lines up with what you’d expect from the game in question on PC.

At the moment, GeForce Now supports streaming games at up to 1080p at 60fps. This will apparently change in the future, with support for higher resolutions planned. You can adjust stream quality settings using GeForce Now on desktop but on mobile apps everything is dealt with automatically.

One of the biggest draws offered by GeForce Now is the price. The regular version is completely free – the catch is you’ll have to queue to access a gaming PC, and can only use said PC for one hour at a time. Once that one-hour period is up, you’ll need to go to the back of the queue and wait for a streaming PC to become available. Oh, and you’ll need to buy games.

The paid “Founders” subscription, meanwhile, currently costs £4.99/mth with a 90-day free introductory period. You’ll gain priority access to queues (meaning you can skip to the front) and six-hour gaming sessions, and Nvidia will enable RTX – its advanced ray-tracing technology – on supported games as well. 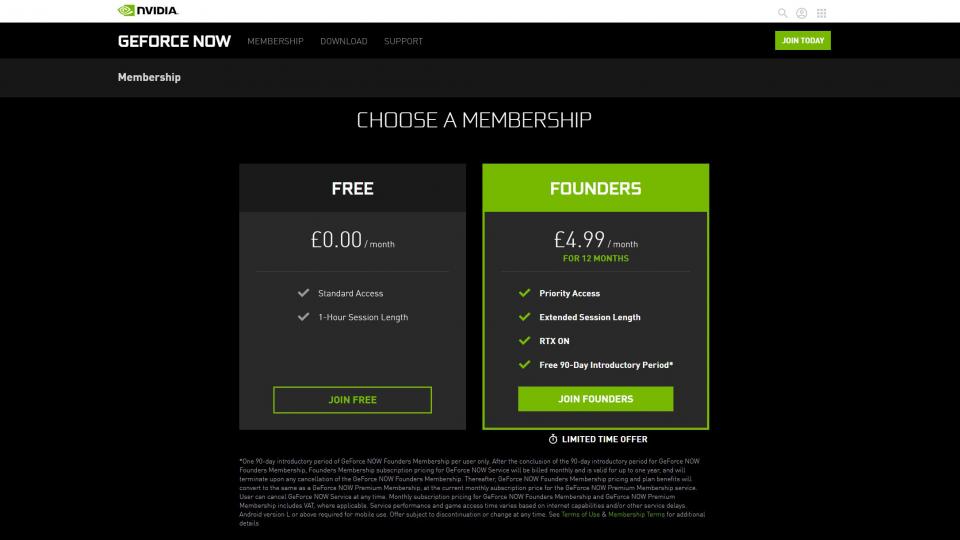 The obvious competition is, of course, Google Stadia. The only version of Stadia currently available is the Premiere Edition: that costs £119 and includes a Stadia controller, a Chromecast Ultra and a three-month Stadia Pro subscription (normally £8.99/mth), which nets you a few free monthly games. Stadia supports a maximum resolution of 4K and a top frame rate of 60fps.

Alternatively, you might want to consider Shadow, a game streaming service that essentially provides an individual high-spec gaming PC from which customers can stream any Windows-compatible games, including those they already own. Prices start at £12.99/mth.

It’s plain to see that GeForce Now is undercutting the competition heavily on the pricing front, which is excellent news. But how does it actually work?

The short answer is: ponderously. Once you’ve downloaded the app and found a game to play, GeForce Now will run a connection test to make sure you’re hitting the minimum requirements: a 15Mbits/sec connection for 720p at 60fps, and a 25Mbits/sec connection for 1080p at 60fps. I’m certainly not the first to point out that this looks like a DSL dial-up progress window, and works about as rapidly as one too. Fortunately, it doesn’t happen every time you play. 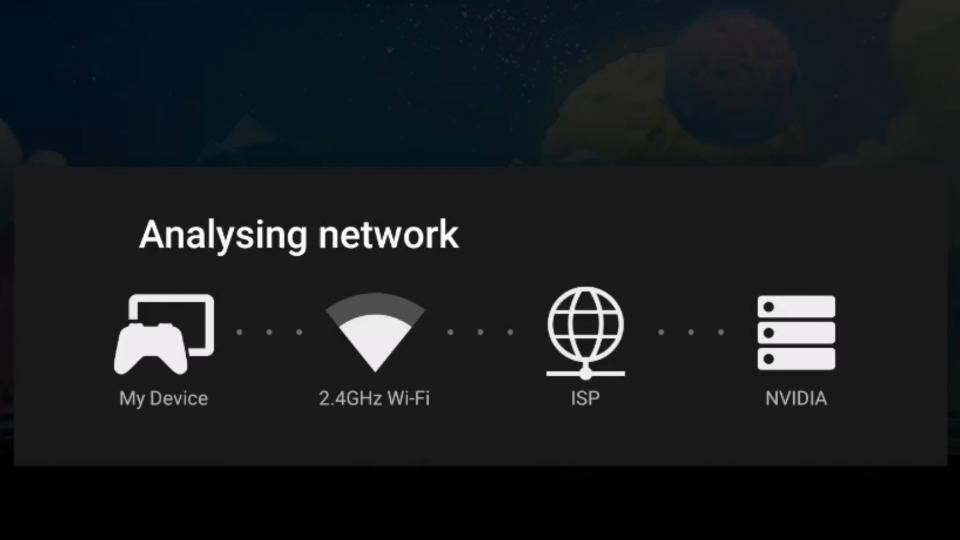 GeForce Now will tell you if there’s an issue but will not stop you from attempting to play, even if your connection is below minimum requirements. If you’re playing one of the free games included with GeForce Now (you can find a seemingly up-to-date list of those here), the game will begin to load with no additional steps.

If you’re playing a game you’ve purchased via one of the many game launchers, however, GeForce Now will run said launcher in a window streaming directly from one of Nvidia’s PCs. That means you’ll need to sign in to your Steam/Epic Games/Uplay account, to prove that you own the game you plan on streaming. Like so: 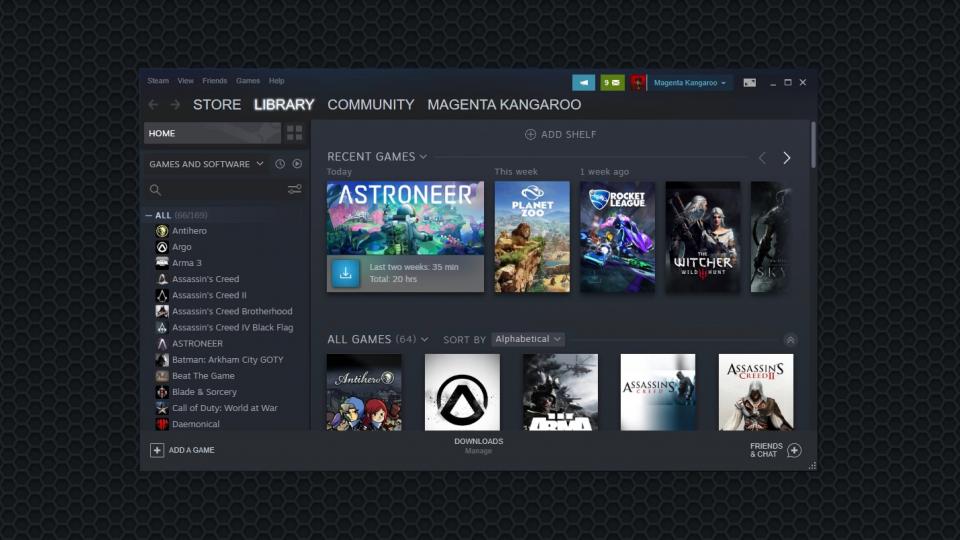 And, as unavoidable as it might be, waiting in a queue every hour to continue playing a game is a pain – not a huge one, but enough to test your patience. As such, plumping for the Founders edition is the only way to save yourself some mild irritation.

I tested GeForce Now in each of its various permutations, booting a variety of games on a custom gaming PC, a MacBook Pro from 2015, a Microsoft Surface Laptop 2, a Nvidia Shield TV 4K and two Android smartphones. Fundamentally, the hardware is irrelevant, as long as it meets the minimum specs; what’s interesting is how poor your internet connection has to be before you experience problems.

Diving straight into The Witcher 3 and Assassin’s Creed on my PC via my 50Mbit/sec plus home broadband, I noticed almost nothing that detracted from the experience: no perceptible input lag, no loss in quality, no stuttering. Gaming at max settings at 1080p might not be mind-blowing but, don’t forget, this is happening over an internet connection. 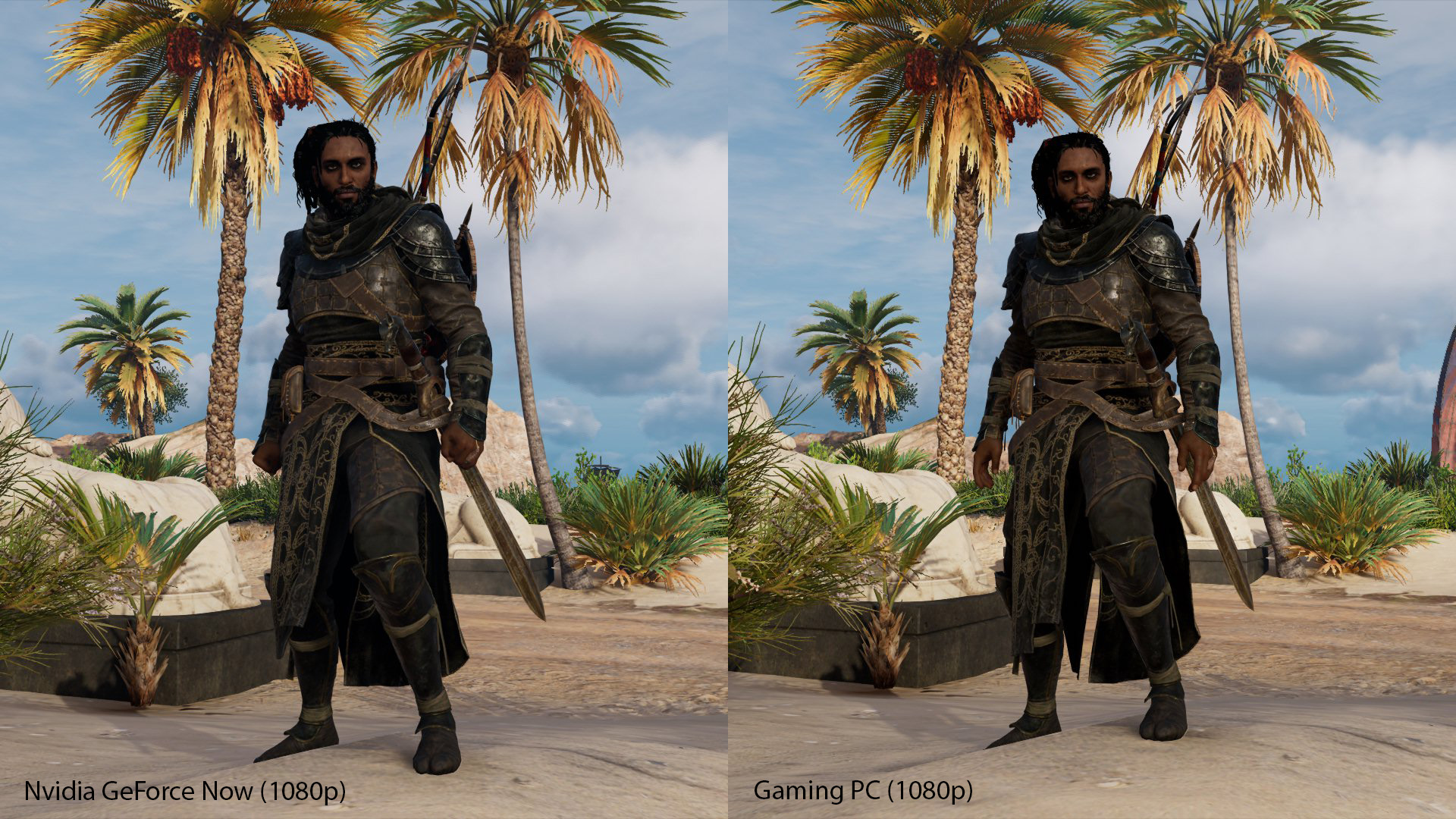 Moving from my stable home fibre broadband connection to the open network at the Expert Reviews offices, however, produced some wildly inconsistent results. Sometimes, streaming quality dipped and input lag soared; on other occasions, the experience was unimpeded. Somehow, streaming Assassin’s Creed: Origins on my Pixel 3 in a packed canteen via the non-secure work network was a pleasant experience.

Unsurprisingly, the situation worsened when streaming Astroneer to my Google Pixel 3XL via an ADSL connection; at a measly 9Mbit/sec, the stream was essentially nonexistent. Interestingly, streaming the same game on my phone via my Three network connection went more smoothly than expected, given the inconsistency of my signal at home.

All in all, my experience was a positive one: streaming a game at 1080p with minimal lag is easily achievable over an uncongested fibre broadband connection (wired or wireless) or even a strong mobile network connection. I had a couple of instances of inexplicable latency issues but these seemed to be anomalies; in fairness, I refused to let the software automatically lower the resolution to suit my connection, so maybe I had it coming.

To be honest, though, the most exciting use case for this technology is streaming AAA titles to your smartphone or ageing laptop and, to that end, graphical quality is far less important than a smooth stream.

The GeForce Now experience is a potentially vast one. While there’s currently no way of seeing the complete list of compatible titles, a browse of my pretty meagre Steam library revealed that just under half of my 64 games were compatible with GeForce Now. Put simply, the library of games is significantly better than that of Google Stadia, even though publishers Activision/Blizzard, Capcom, EA, Square Enix and Bethesda decided to pull their titles from the service after initially supporting it during the Beta programme.

The relatively large number of supported titles is offset a bit by an underwhelming number of free games included with GeForce Now – the sort that don’t require users to prove ownership. Ironically, the fact that you don’t need to wade through clumsy log-in windows and store-fronts makes these few games powerful weapons in GeForce Now’s fight against Stadia. If only they were all like this.

Another weapon in this particular fight is graphics customisation. Compatible games can be fiddled with in as much depth as their non-streaming counterparts, which is a huge boon for gamers who enjoy tweaking settings. The only downside is that if a game requires a restart to apply graphical changes, it’s luck of the draw as to whether your requested settings are implemented once you restart and reconnect to a streaming PC.

Given that GeForce Now has an annoying habit of adjusting (read: lowering) your settings to keep the stream quality high, fussy gamers might find themselves spending a lot of time in graphics settings menus. At the end of the day, though, Stadia offers no such customisation, so I count this as a win for Now.

What Google Stadia does offer, however, is a seamlessly slick experience. In avoiding the endless portals, queues and log-in boxes, Stadia has made the process so effortless that you’ll almost forget there’s a limited selection of games. By comparison, GeForce Now is clunky, the interface dated and the streaming process fraught with mildly irritating complexities.

That’s not really what GeForce Now is, though. It’s simply about taking your existing game library and giving you the opportunity to play it anywhere the internet connection is good enough. Once you do start playing, the GeForce Now experience is at best indistinguishable from that of a gaming PC running at 1080p at maximum graphical settings, which is quite an achievement.

Being able to play games you already own on a laptop or smartphone is something that Stadia is totally unequipped to offer. As a result, and thanks in part to the very affordable pricing model, we’re tentatively recommending Nvidia’s service; Stadia is great for newcomers but for seasoned PC gamers, there’s literally nothing better than GeForce Now. Even if it is a little rough around the edges.