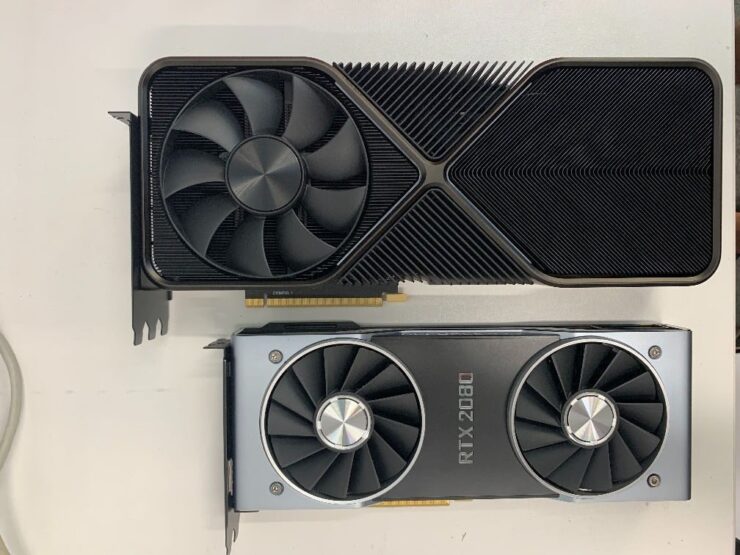 The leak shows NVIDIA’s GeForce RTX 3090 sitting right next to the GeForce RTX 2080. Just looking at the card, the GeForce RTX 3090 looks insanely huge and supports a triple slot form factor. This leak not only confirms the earlier leaked heatsinks and cooling shroud but also confirms several reports that had stated that NVIDIA is going all out with its Founders Edition design on the higher end Ampere GPU based graphics cards such as the GeForce RTX 3090. 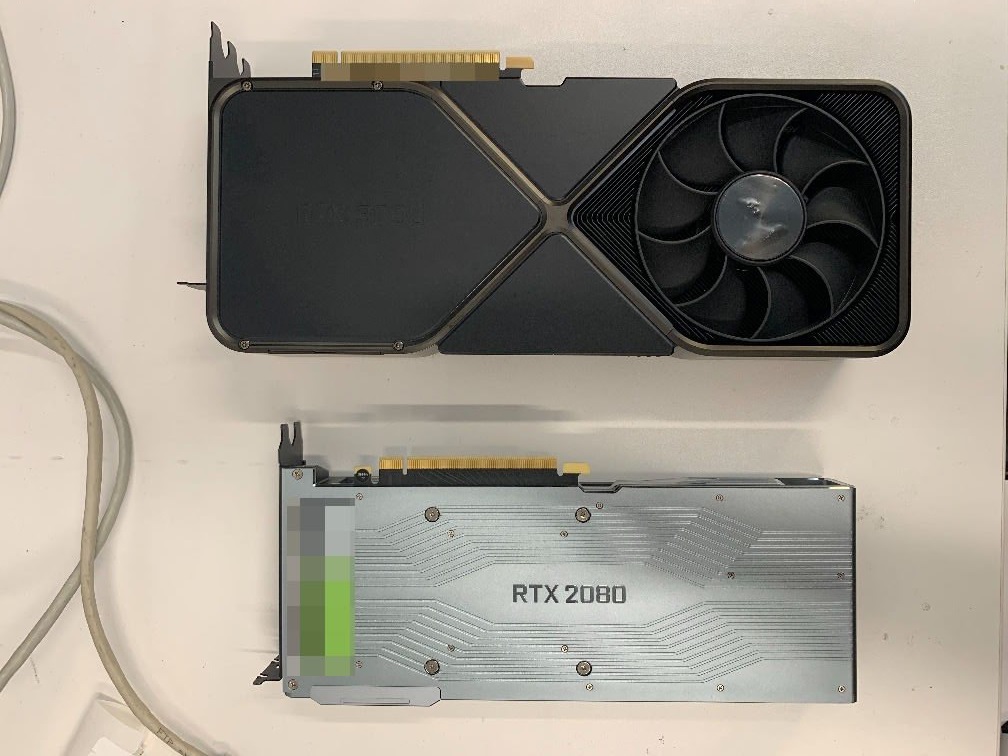 Just looking at the card itself, the GeForce RTX 3090 seems to be the first reference graphics card to come in such a massive shape and size. It’s a triple-slot behemoth with dual axial-tech fans placed on the front and back in a push-and-pull configuration. The front of the card seems to feature the exposed heatsink blocks with several fins placed on top of the PCB. There’s the aluminum bar that helps reinforce the shroud and even features a small NVIDIA logo etched on to the metal frame.

The name of the card has been blurred out and from the looks of it, the card is still in an early test phase given the ‘Config 1’ marking on the PCIe slot. The Founders Edition design is also expected to feature over 20 power chokes which put it is a more premium design than the flagship non-reference RTX 20 series cards. 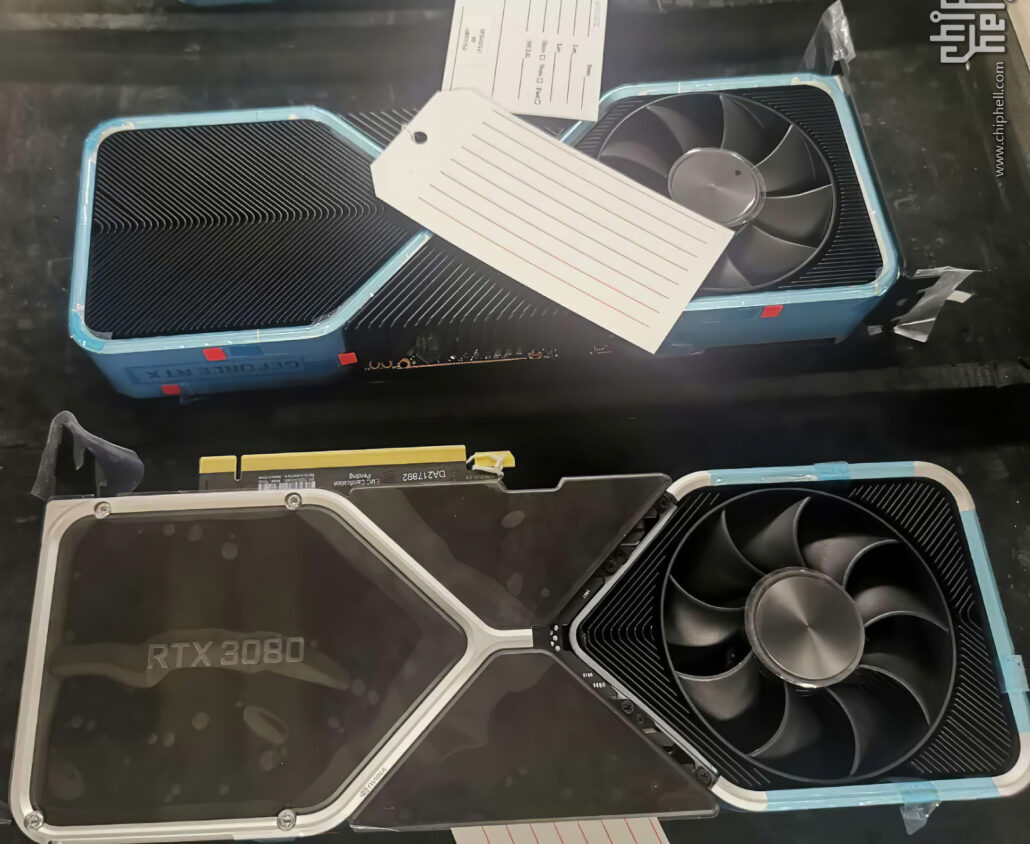 The leaker has also mentioned a price of $1400 US for the Founders Edition graphics card which is close to the rumors we heard last week. The previous rumors had stated that the pricing of the RTX 3090 starts at $1399 US while the Founders Edition would cost an extra $100 US for $1499 US. This remains to be confirmed but either way, the card would be slightly more expensive than the RTX 2080 Ti, based purely on the rumors.

According to leaked details, the GeForce RTX 3090 will feature the GA102-300-A1 GPU. The GA102-300-A1 GPU is said to be comprised of 5248 CUDA cores or 82 SMs. In total, that’s a 20% increase in cores over the GeForce RTX 2080 Ti. No details such as clock speeds, TMU/ROP counts are provided and we can’t take the Ampere A100 die as a reference since gaming & HPC parts share a different configuration hierarchy. 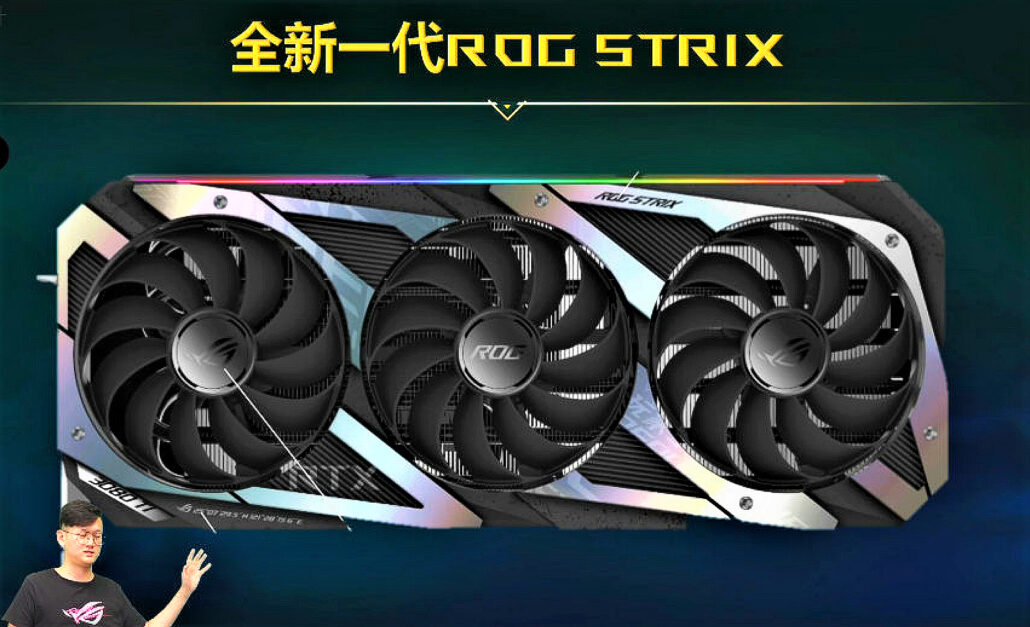 Moving on to the memory side, things start to look interesting as it is stated that the card will get up to 24 GB memory with faster GDDR6X pin speeds. Since that’s a 384-bit bus we are looking at, it will be able to offer nearly 1 TB/s bandwidth.

The NVIDIA GeForce RTX 30 ‘Ampere’ Gaming graphics card lineup is expected to be announced on 1st September at a digital event which will be hosted by CEO of NVIDIA, Jensen Huang. We expect at the very least, three new graphics cards during the event which include the GeForce RTX 3080 Ti (or RTX 3090), GeForce RTX 3080, and a next-generation Titan. There’s definitely a lot more to talk about regarding the Ampere GPUs but we will have to wait until more information comes our way.

Which NVIDIA GeForce ‘Ampere’ GPU are you waiting for the most?