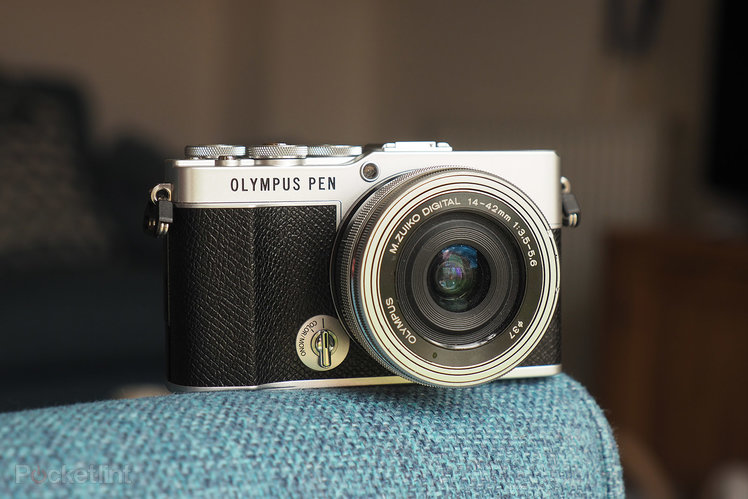 It’s been a full eight years since Olympus released the E-P5 camera, way back in 2013, so why the long wait for this, the E-P7? Well, Olympus sold its camera division to OM Digital Solutions, completing at the beginning of 2021, amid flagging camera sales and a rejig of the original business.

Thing is, just because the sales were down doesn’t mean the cameras weren’t up to scratch. Indeed, we’ve been using an Olympus Pen F for five years to shoot the majority of review images across Pocket-lint’s pages. So for the E-P7 to arrive now is sort-of a perfect fit.

Sure, the ‘proper camera’ market isn’t what it once was – demand is down, but quality is not – so if you’re looking for a small, retro-styled and capable mirrorless system camera then how does the E-P7 hold up? We’ve been living with one for a couple of weeks to find out.

Unusually for any camera these days, the E-P7 isn’t available in black. You can only buy it in silver (as pictured) or white, helping it to stand out from the crowd and enhancing that retro style. Much of the front is covered in a textured black grippy material anyway, so it’s not an outlandish look, and we’re rather fond of its visual appeal. 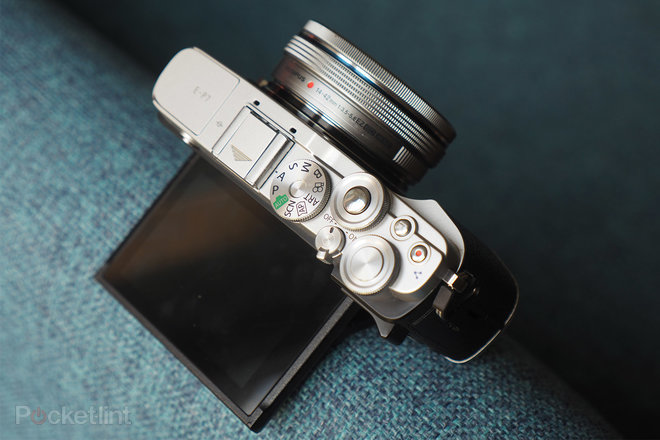 With the included pancake lens (14-42mm) attached, it’s a rather small camera by any mirrorless standard too. That particular lens does extend electronically when switching the camera on – its zoom is electronically barrel controlled too – to make it somewhat larger, but stowed away it’s pretty neat.

As a Micro Four Thirds camera, any MFT lens is compatible, and we’ve been using the much larger 12-35mm with the camera as it’s got a much better close-focus distance and wider aperture (f/2.8 at wide-angle) compared to that fairly limited 14-42mm, which has an f/3.5 aperture at the widest, dropping to f/5.6 at the longest zoom point. That just limits the amount of light that can enter the camera to make an exposure, so isn’t ideal in low-light conditions, as one example.

Fortunately there are heaps of MFT lenses available on the market, and likely a bunch available on the second hand market too, so you’ll never be short of expansion options – if you see this as that kind of camera. Many will, we suspect, want to stick with the small-scale and pancake lens to keep things simple. The choice is yours, though, go simple or go complex with a whole raft of lenses. 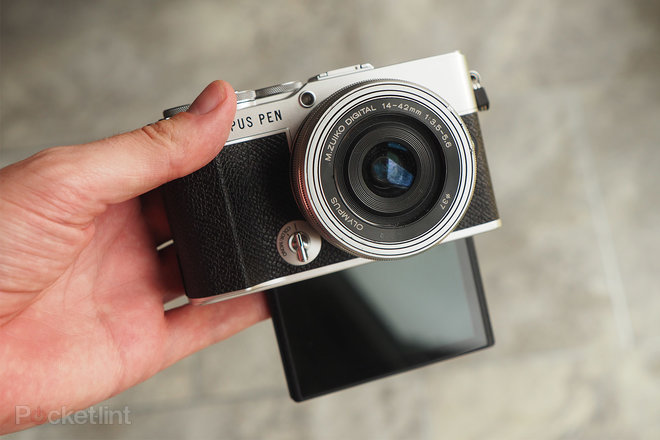 The E-P7’s screen, which is 3-inches on the diagonal, is mounted on a tilt-angle, meaning it can pull upwards into a horizontal position, or be pushed downwards so it’s a full 180-degrees and facing forward – but it hangs ‘under’ the camera in this position, so it’s a bit fiddly for using for selfies and such like. It’s useful to have a tiltable screen, but we would much prefer a full vari-angle option, largely because – as with the Pen F – it’s possible to stow the screen in on itself to avoid scratches (something that E-P7 lacks entirely).

In terms of layout there are a bunch of dials and controls. Up top is a mode dial, an on/off click switch, plus two thumb dials to quick-adjust various controls such as aperture and shutter speed. There’s also a one-press record button, next to which is a quick-access menu button (a duplication of the one in the d-pad on the rear, which seems unnecessary really). Speaking of the rear, there are direct buttons for ISO, focus point, flash, burst mode, exposure lock, main menu, info, play and pause. It’s quite a busy arrangement of buttons. 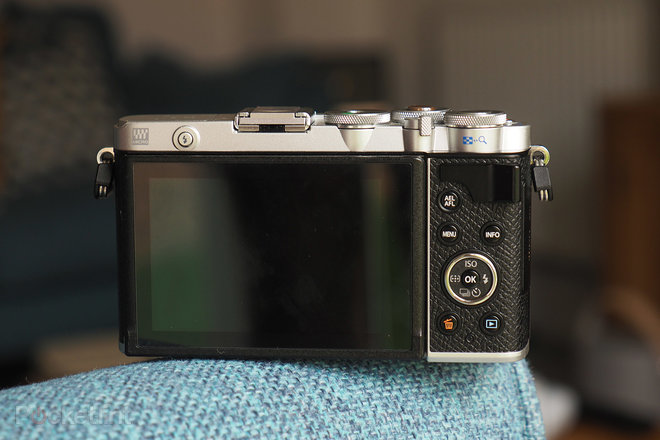 Thing is, Olympus has always had this busy set of buttons, so it’s actually familiar if you’re a familiar user. If you’re not, however, it’s undoubtedly busy. The menu access is also typically Olympus: i.e. deep, to the point of also being busy. But at least you can control the minutiae of various settings, you might just have to dig around a bit.

In performance terms, the E-P7 does perfectly well, but compared to 2021’s best-of-best it’s not quite on par. So it’ll depend on what you want to use this camera to shoot.

The autofocus system, for example, is a 121 point setup, with each area individually selectable if you wish, or auto/group selectable in single or continuous focus. It’s fine, fairly quick, but it’s not a patch on, say, Sony’s ultra-fast current system, nor does its -2EV low-light focus get anywhere close to the current Nikon or Canon best (which is now somewhere around -7EV, in the ballpark of moonlight). 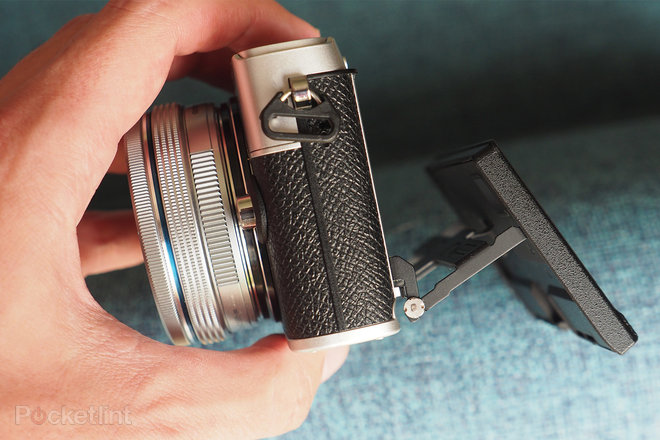 Premier to the E-P7’s feature set is Olympus’ 5-axis image stabilisation system, just as you’ll find in the earlier Pen F, which is designed to counteract pitch, yaw, roll, and vertical/horizontal shift. You can actually hear it “fizz” into action in use; a sound that lets you know for sure it’s operational. It’s good for up to 5-stops, which you can really ‘feel’, especially in video mode, or when shooting in lower-light conditions and aiming for that sharp snap. (Note, however, this system cannot work in tandem with lens-based stabilisation.)

The E-P7’s 20.3-megapixel sensor doesn’t go overboard like so many modern alternatives do; it’s actually a rather conservative resolution by 2021’s standards – but that brings its own benefits as each sensor diode (‘pixel’) is larger and this helps with overall image quality.

OM Digital Solutions hasn’t really massively moved Olympus’ prowess forward in the past five years, though, as you’ll be able to get this kind of quality out of the also-20MP Pen F.

But that’s not to say it doesn’t fare very well indeed. Get the right lens on the front – which, as we alluded to before, isn’t really the 14-42mm kit lens – and the E-P7’s images bring detailed results. Sensitivity kicks off at ISO 200 – there’s still no ISO 100 proper option – where the results are crisp and clear. Sure, there’s some slight grain present if you inspect images at close detail, but nothing problematic.

The higher ISO results are also very reasonable. We typically capped at ISO 1600, as beyond this the visible grain is pronounced to a more noticeable degree, particularly at ISO 6400 and up – despite colour noise being largely absent, even in raw files. 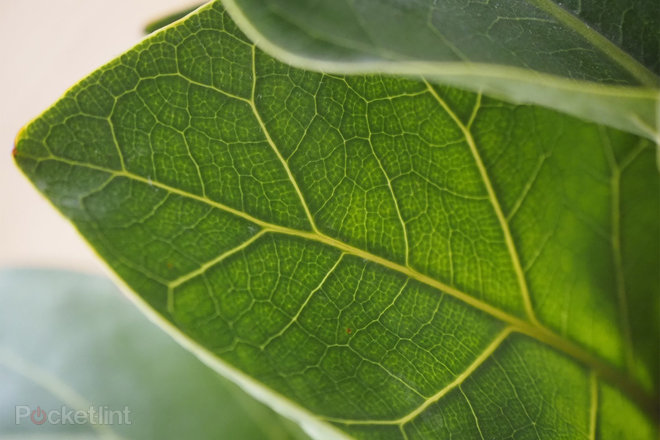 One thing that helps set Olympus apart from the competition is the abundance of in-camera adjustments available. There are 31 Art Filters, which you can either ignore or go to town with, while at the front of the camera there’s a Color/Mono switch to quickly jump into black and white. This feels like the Olympus approach: to be more playful, for more focus to be about digging deep in camera and setting up filters and profiles just as you want things to look.