Asian phone brands releasing themed/branded alternate versions of an existing device is nothing new. But while phones like the Samsung Galaxy Fold 2 Thome Browne Edition, the Samsung Galaxy S20 Ultra BTS Edition, or the OPPO Reno Ace 2 Gundam Wing version are mostly just the original devices in a fresh coat of paint, OnePlus has put in a little more effort with its OnePlus 8T Cyberpunk 2077 Edition, in that the phone actually features a new design that uses different materials.

The internals remains the same, but at least the look and in-hand feel of the phone is a new experience. The phone is only sold in mainland China, but some units have made its way south of the border to Hong Kong’s bustling import phone scene, specifically Trinity Electronics, the most popular shop in Hong Kong for such imports. 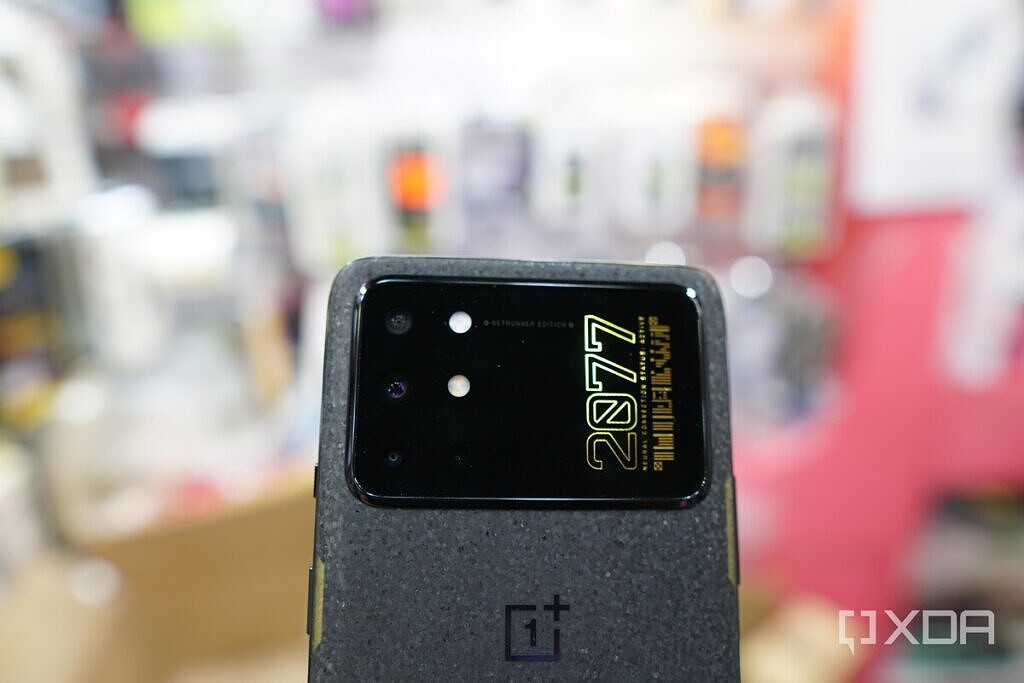 This special edition phone is in high demand in Hong Kong — the first batch of devices sold out within a couple of hours of arriving — but we managed to get our hands on the second batch for a quick hands-on. Special thanks to Trinity Electronics for letting us demo the device.

Packaging: With a twist of Cyberpunk 2077!

The OnePlus 8T Cyberpunk Edition comes in a slightly complicated yellow and black packaging that involves a yellow cardboard outer sleeve, a black box cover, and then a dual-layered yellow box housing the device and all the goodies. 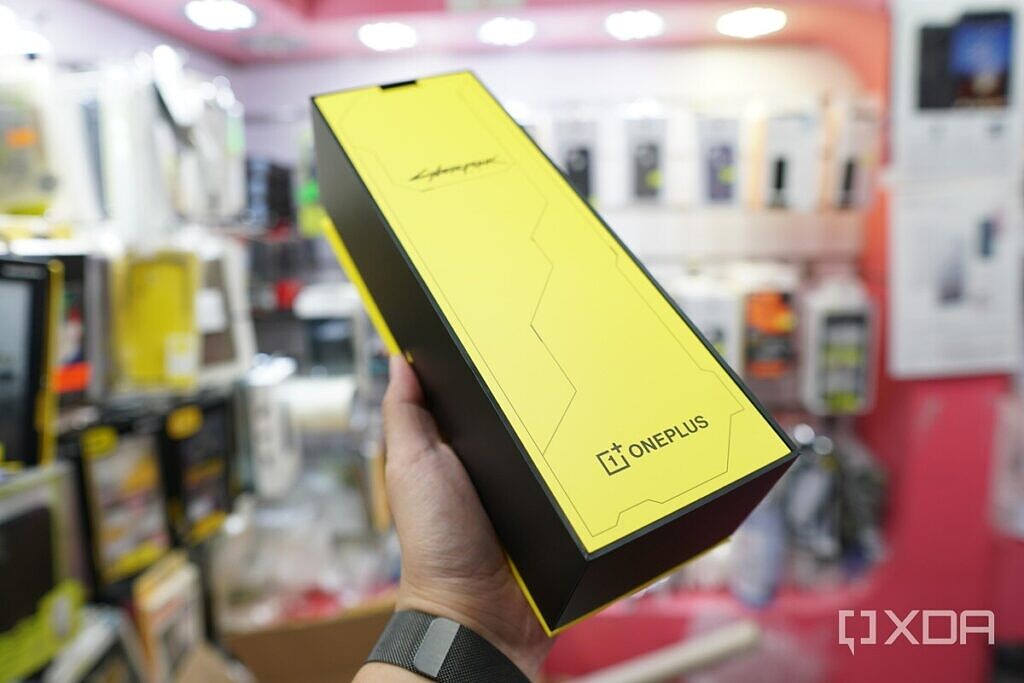 These include a pin featuring graphics from the game (the unit I opened had a “Night City” pin, but there are other designs); a kevlar case that’s one of the best looking freebie cases I’ve seen; a poster, along with the usual OnePlus fares like logo stickers and white Warp Charge brick and red USB-C cable. 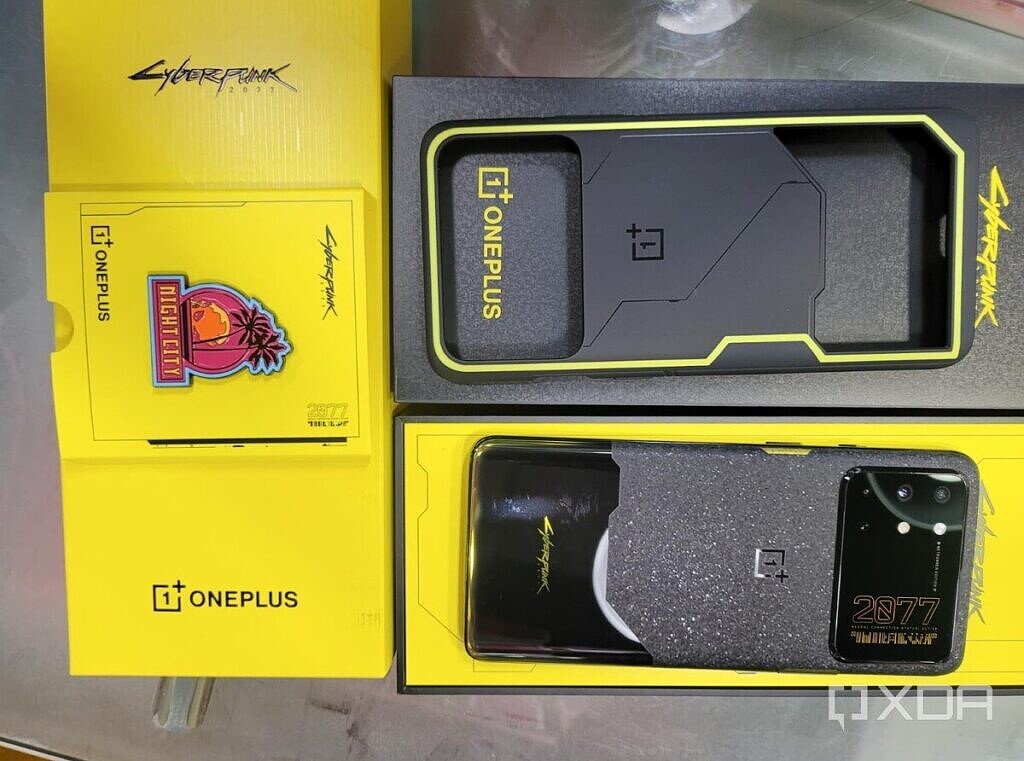 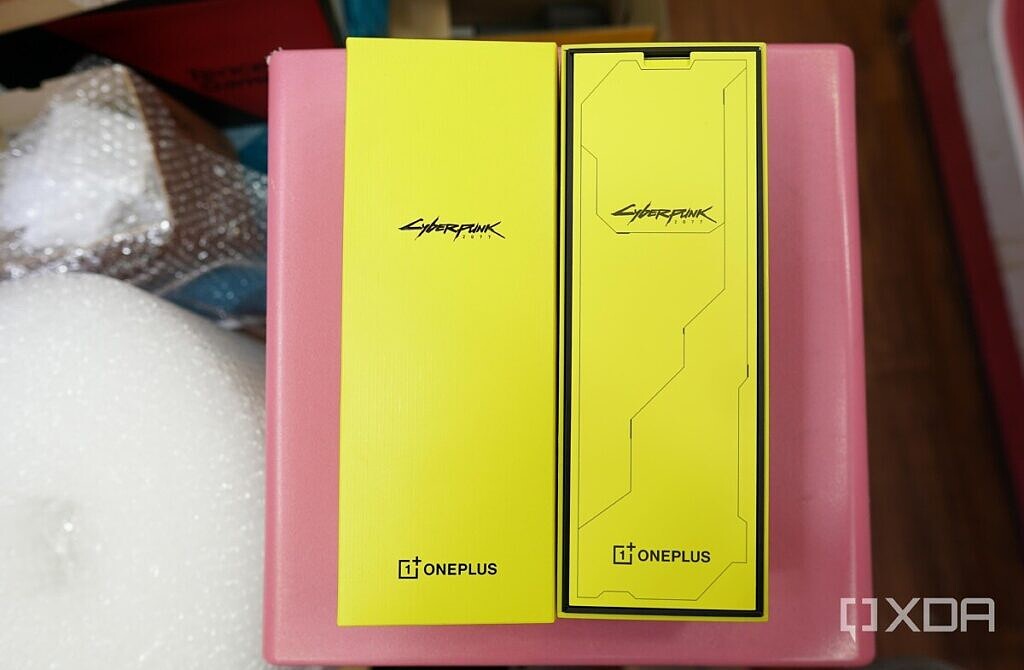 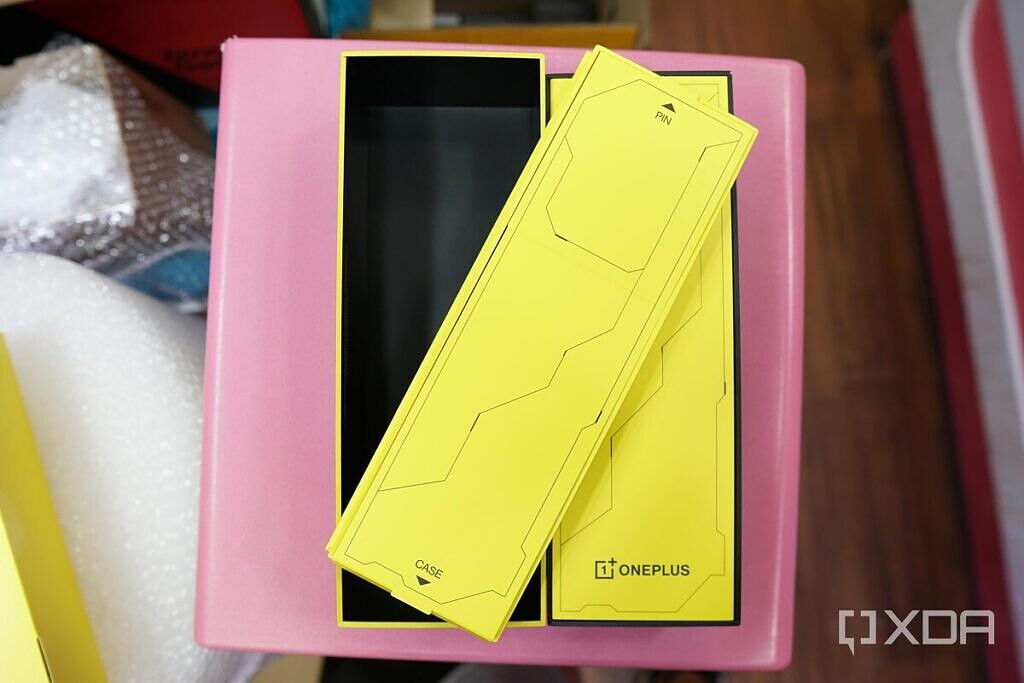 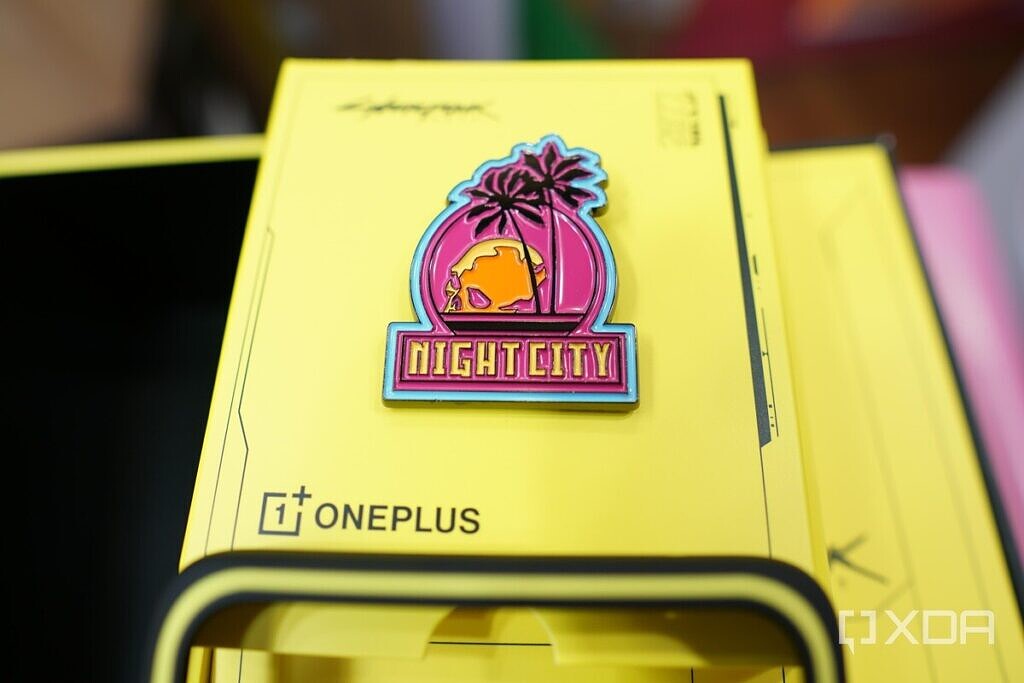 The case wraps around all four corners but leaves two giant openings in the back to accommodate the large camera module and leaving the Cyberpunk logo on the bottom visible. The OnePlus logo along with the grooves that run across the back of the case has a subtle texture that provides extra grip. 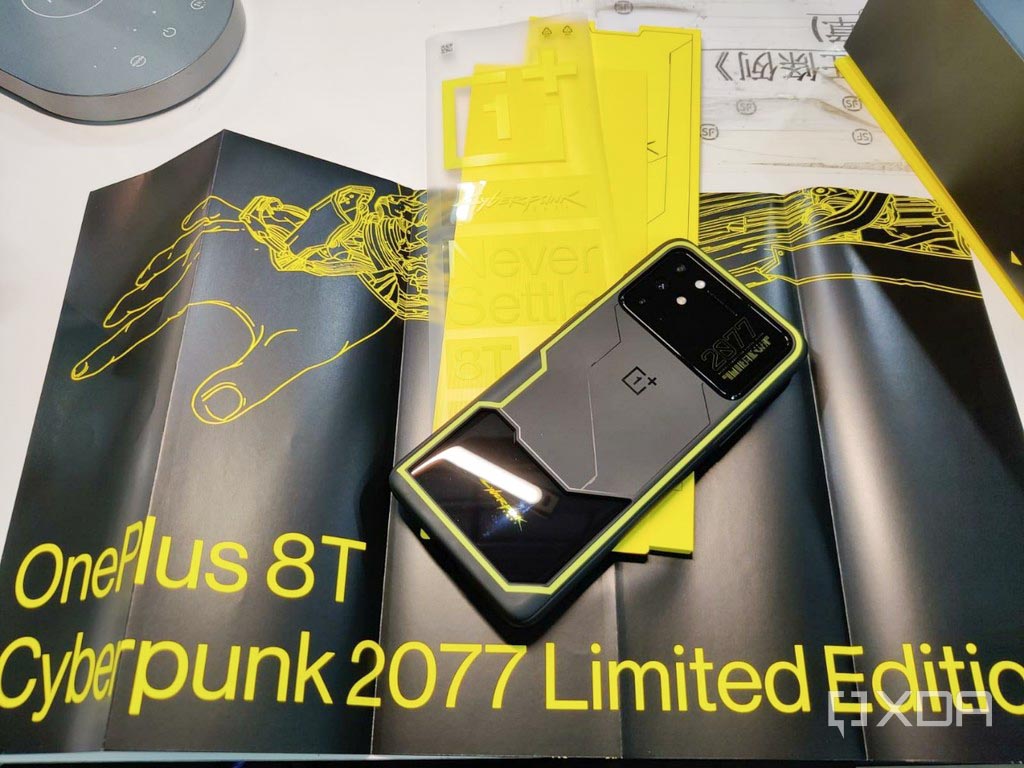 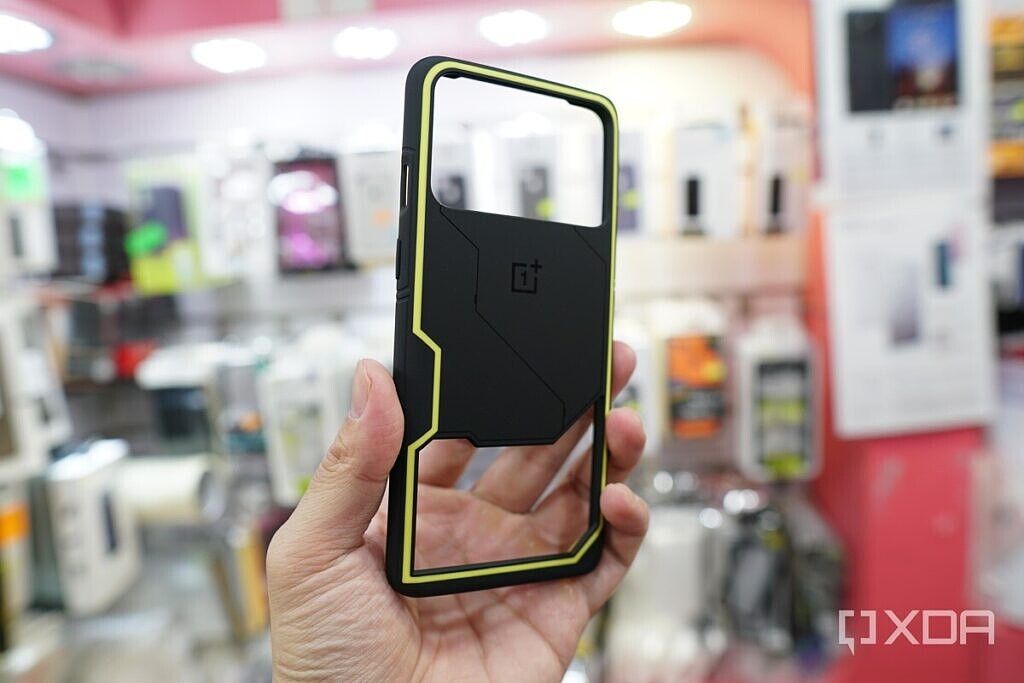 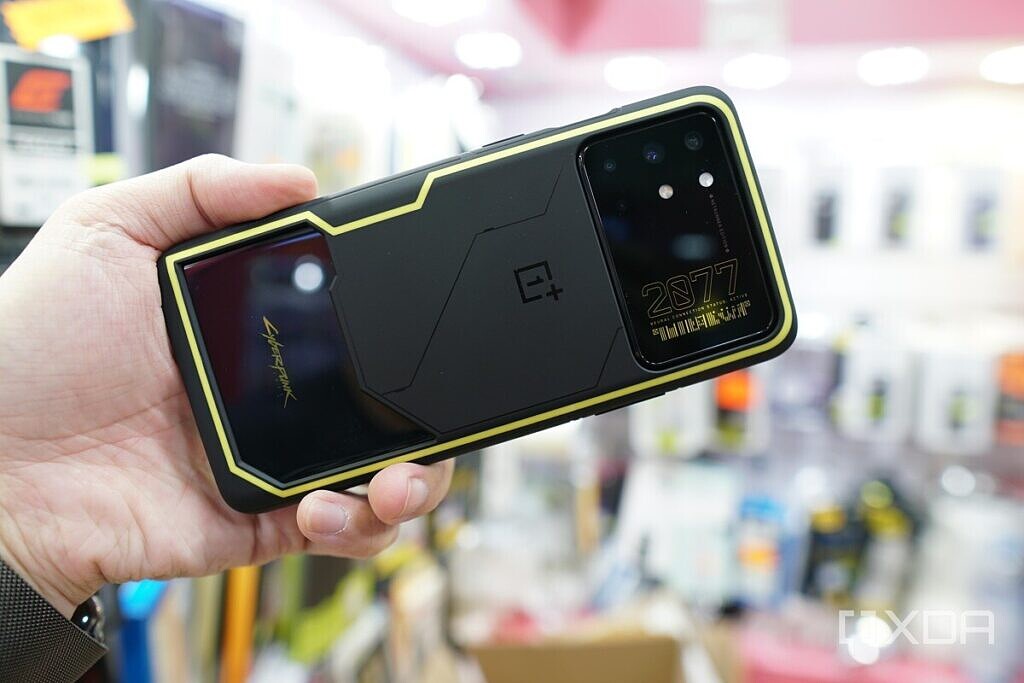 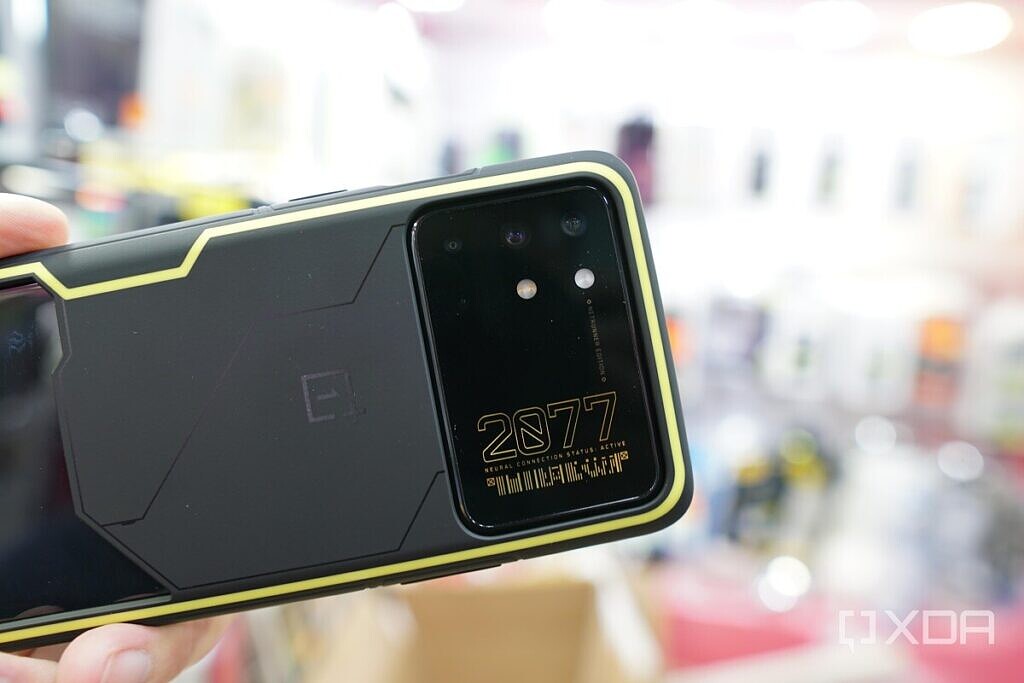 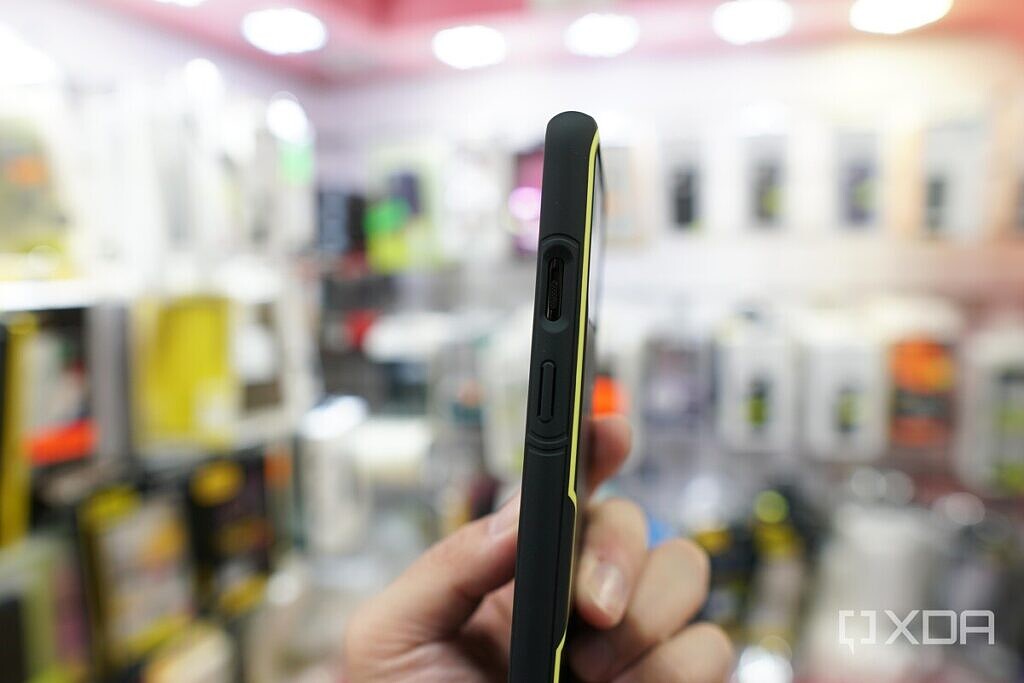 Overall, the packaging provides a departure from the usual OnePlus unboxing experience and fits the aesthetics of the video game well. 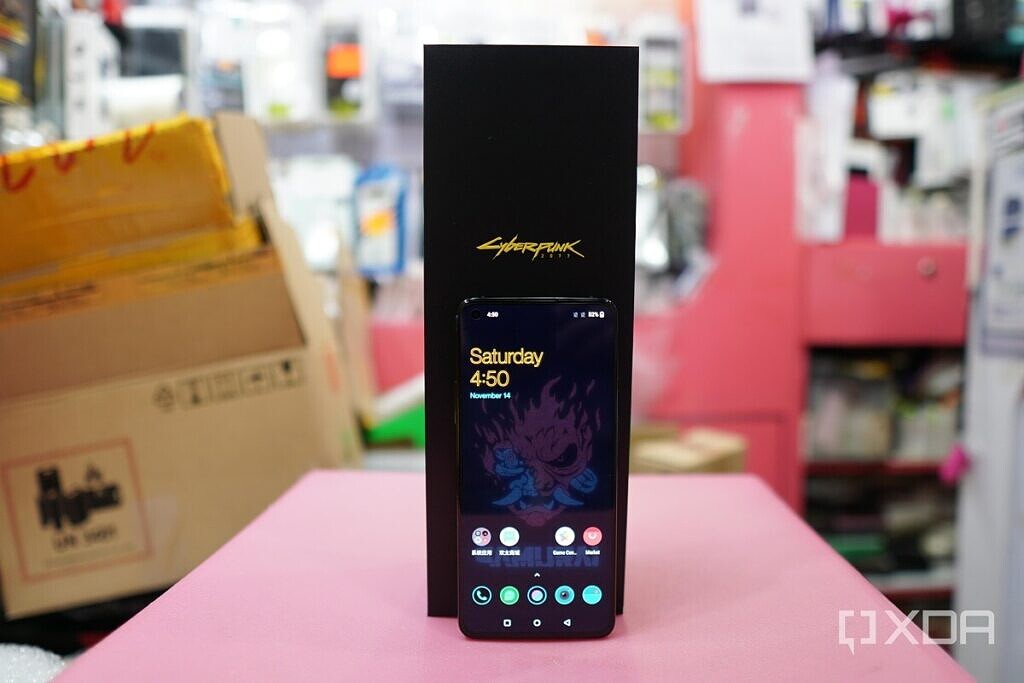 Design: Adds some much needed style to the bland OnePlus 8T

This is totally a subjective point, but personally, I thought the standard OnePlus 8T‘s back design looked really bland. The Cyberpunk Edition 8T completely changes this with a unique and stylish look. The first thing most will notice is the giant camera module that spans almost the entire top third of the device’s back, with 2077 printed below the glass that shimmers under the light. This change is all stylistic, however, as the camera system remains the same as the OnePlus 8T. 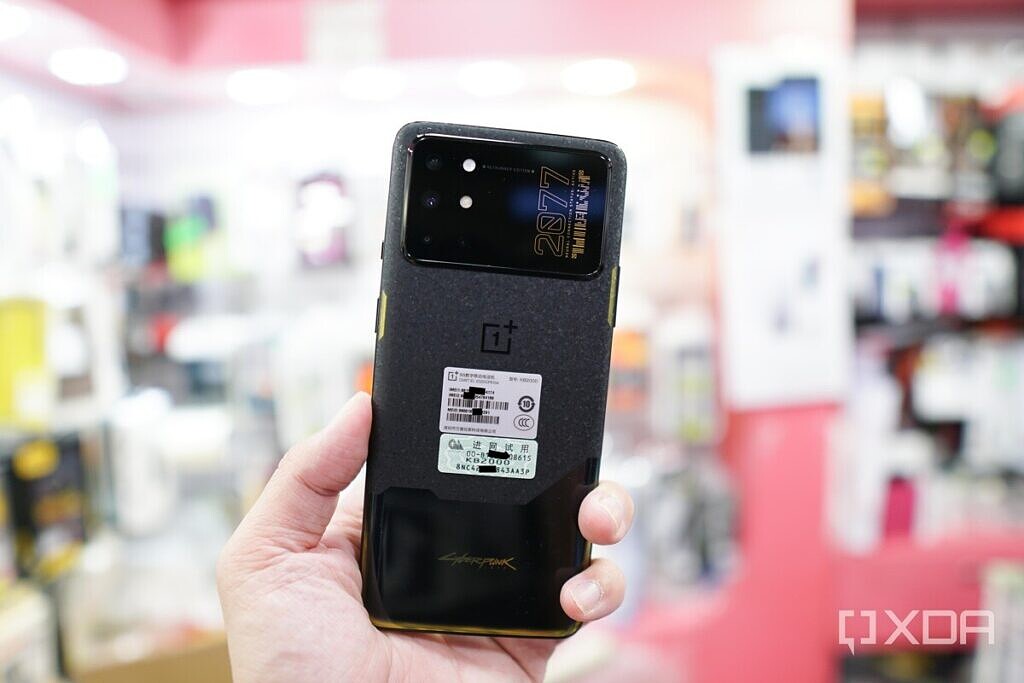 The middle part of the phone uses anti-glare glass and is painted to look like sandstone. The texture feels like it too. The bottom part features a shiny carbon black finish. The bottom edges of the glass feature a subtle neon yellow gradient coating that becomes brighter when light is reflected off it. There are also two additional yellow markings near the placement of the power button and volume rockers. 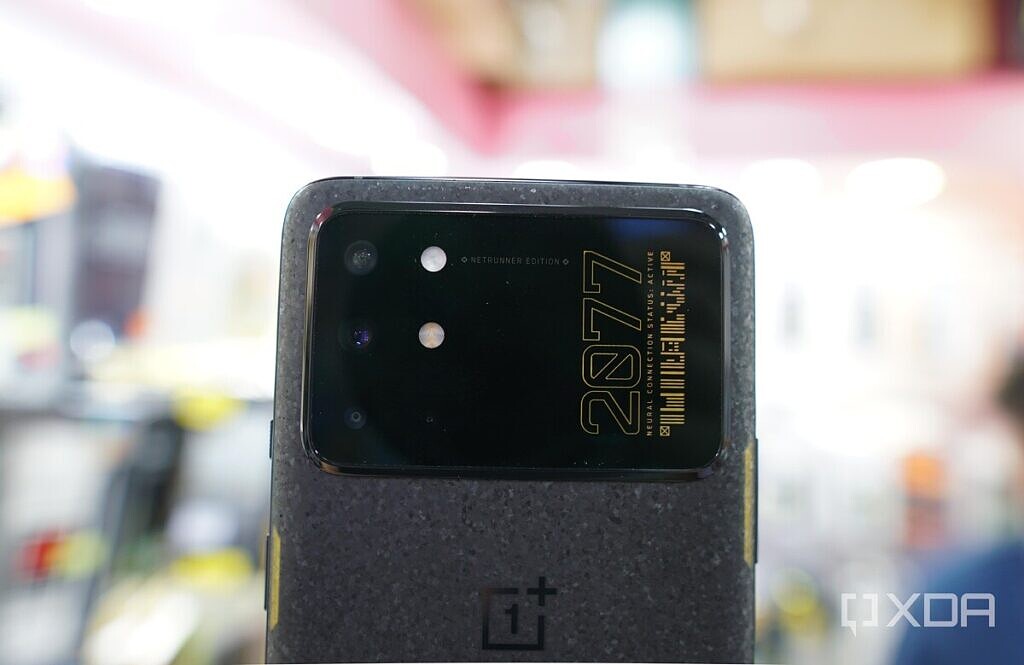 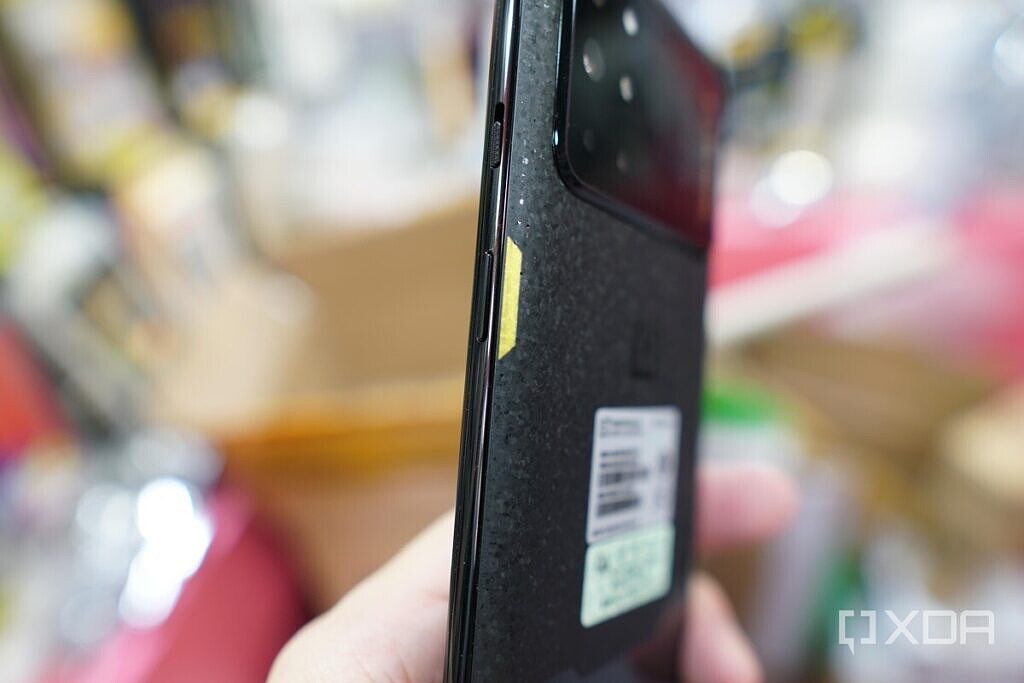 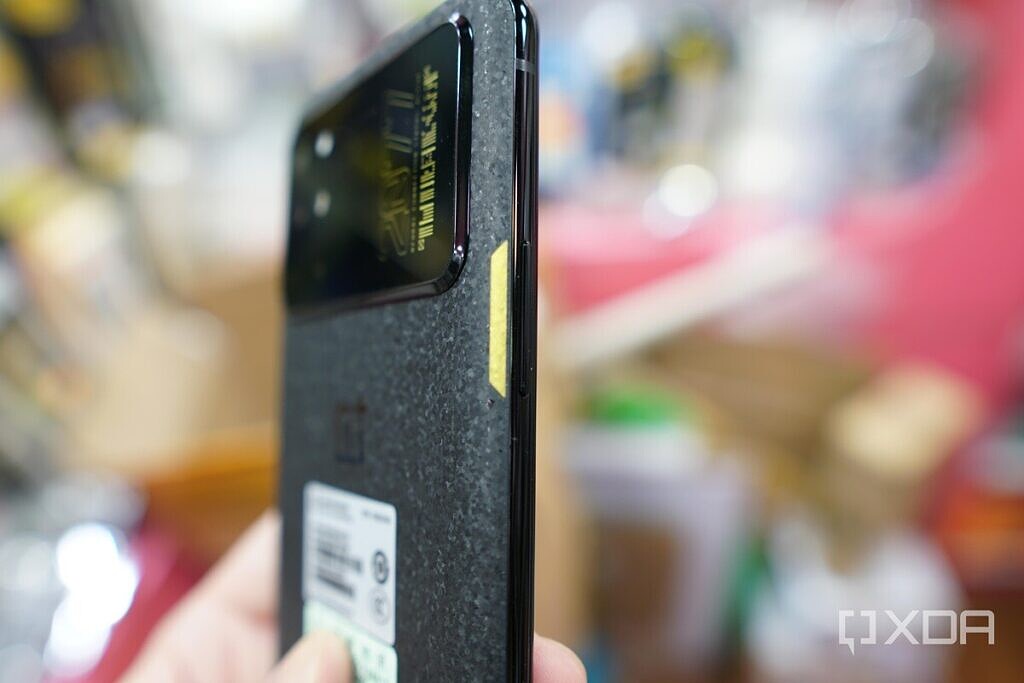 The Cyberpunk 2077 theme isn’t just limited to the outside of the phone. Boot up the device and you’re greeted with a special animation as if it’s being hacked (see video below).

Once you’re in the homescreen and you have a neon wallpaper that starts out dim but lights up when you swipe or scroll on the screen. App icons and fingerprint scanning animations all get the Cyberpunk 2077 theme treatment too. 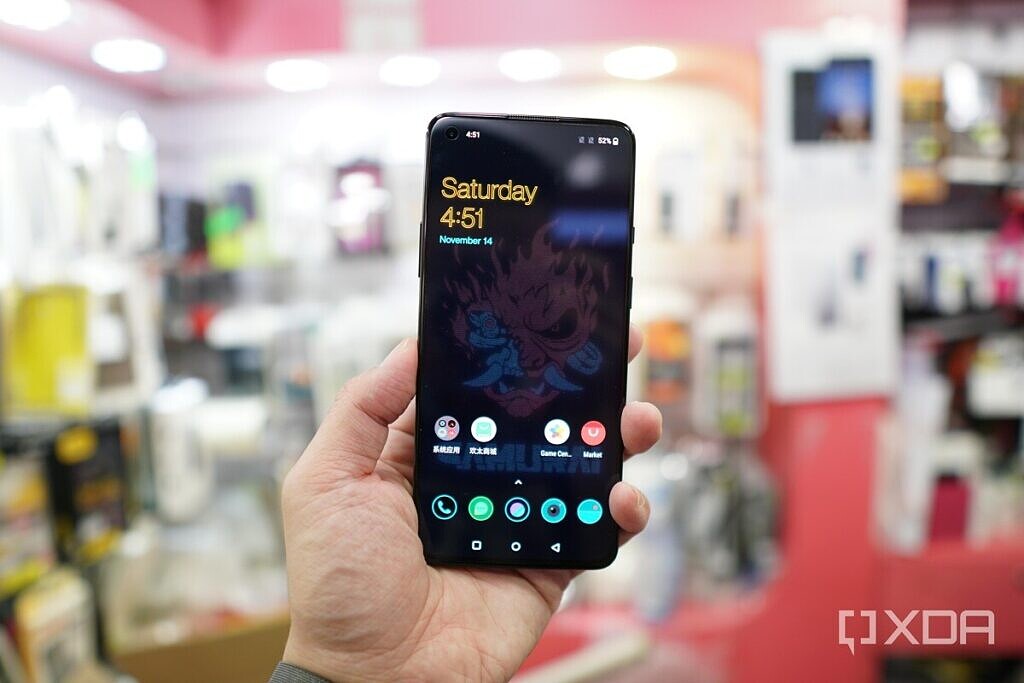 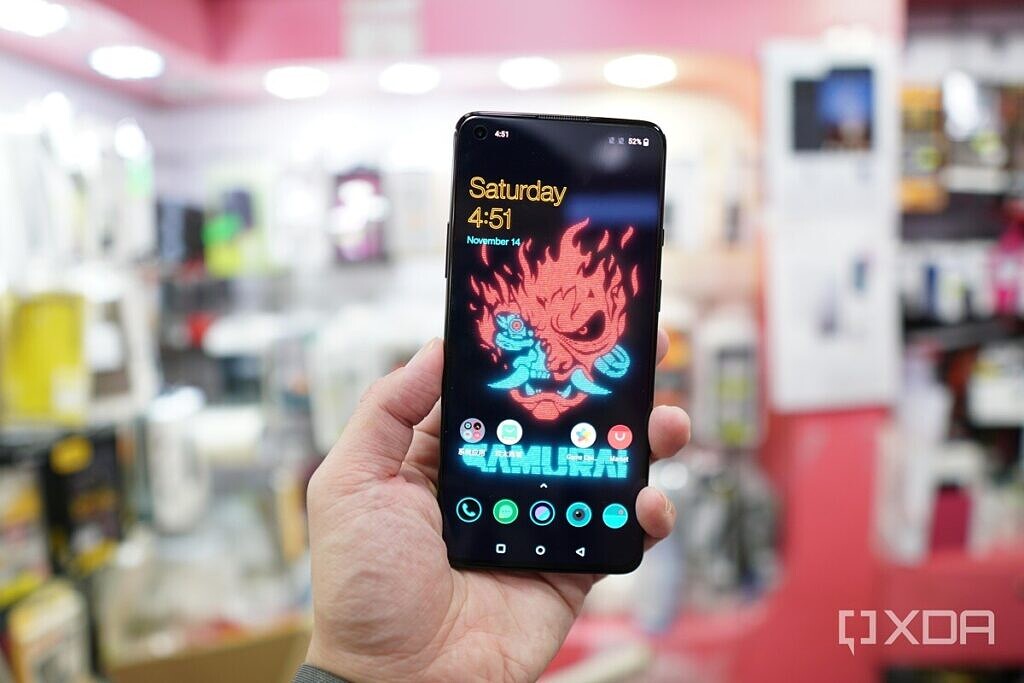 There are also new notification and unlock sound effects from the upcoming game. Other than that, the phone’s settings panel on HydrogenOS appears to be identical to the OxygenOS running on the OnePlus 8T. Of course, all of these new icons and wallpapers are just themes, so if you want to change back to the standard OxygenOS/HydrogenOS look and feel, that’s only a couple of taps away. 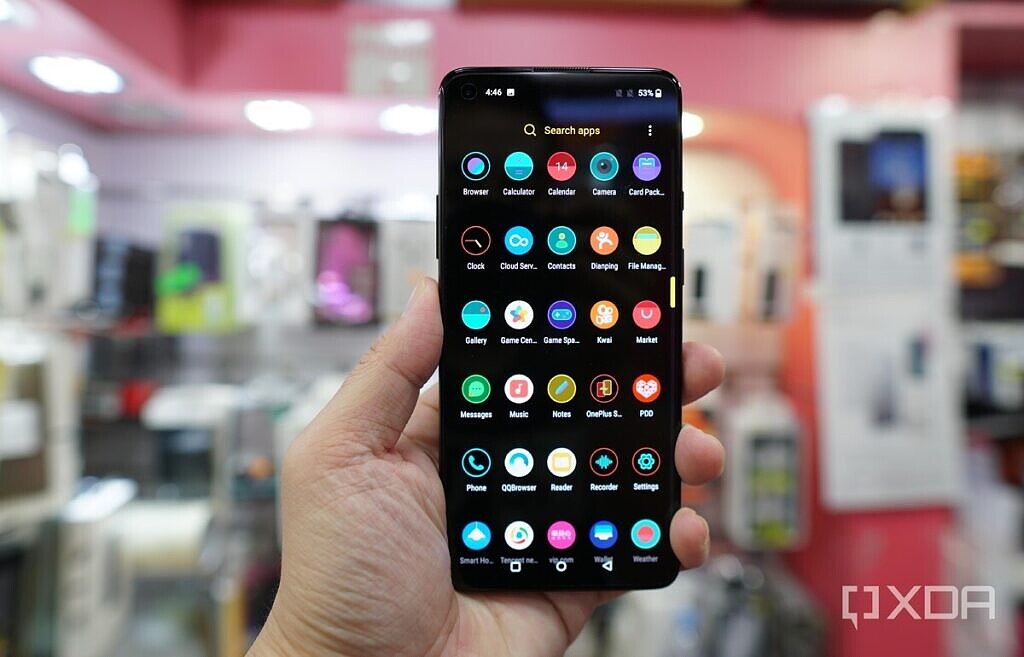 Since this is a China-only phone, the device does not come with Google apps out-of-the-box, but these can be side-loaded easily. The OnePlus 8T Cyberpunk 2077 Edition is on sale in China for CNY 3999 (~$599).