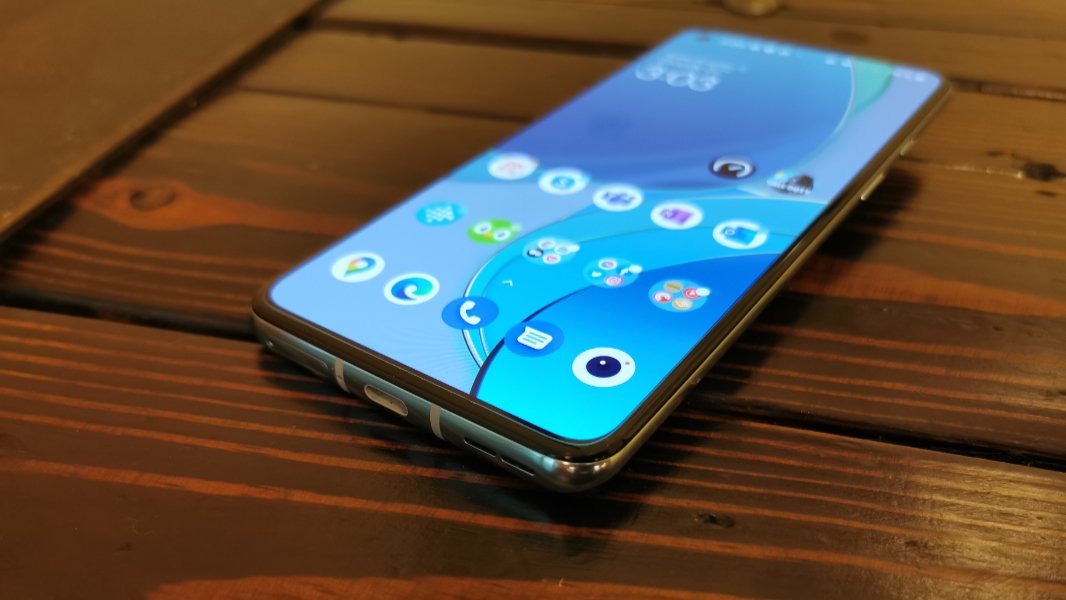 The OnePlus tagline is “never settle,” but despite some major advances, the OnePlus 8T is another frustrating exercise in compromise: The camera system is middling at best and there’s no wireless charging or water resistance rating.

The issue here seems to be one of positioning: In the past, OnePlus would release one flagship in the spring and then upgrade it in the fall with a “T” release. But in the past two years, OnePlus has dramatically expanded its product lineup and raised its prices.

On that note, the OnePlus 8T is just one of several handsets that OnePlus released this year, and it’s not even an update to its highest-end handset, the OnePlus 8 Pro. Instead, it’s an update to the standard OnePlus 8, which OnePlus is still selling for some reason. Confused yet? Welcome to the club.

Like previous flagship-class OnePlus handsets, the OnePlus 8T arrives in an attractive all-glass and aluminum form factor. There are only two colors on offer—a matte Lunar Silver and a glossy and reflective Aquamarine Green—and my review unit is the former, which I prefer. 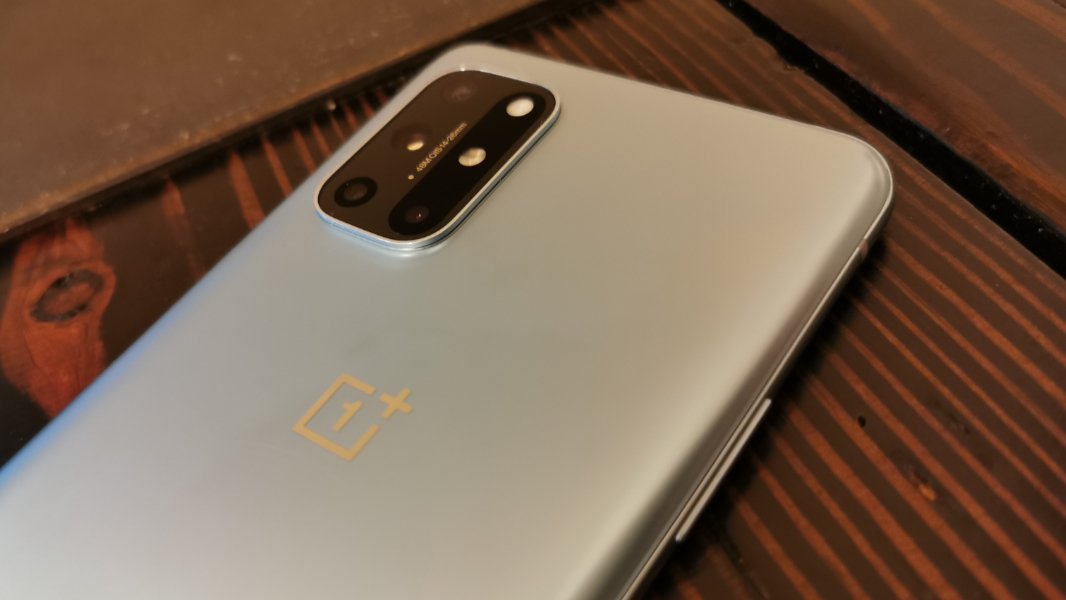 Compared to its predecessor, the OnePlus 8T differs mostly in its redesigned rear camera array, which is no longer centered in a vertical column but rather takes up a larger, Samsung-like rounded rectangle. Thankfully, the camera bump is minimal, as it was on the OnePlus 8. 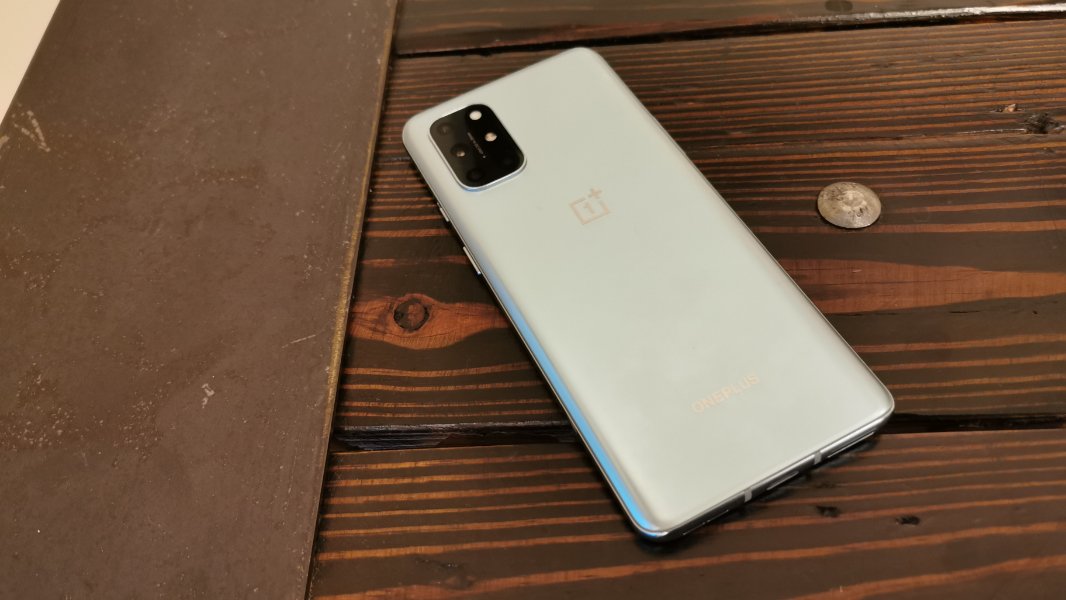 Beyond that, the OnePlus 8T is almost identical to its predecessor from a size, shape, and weight perspective. It’s a great design.

The OnePlus 8T display is the first major upgrade from the OnePlus 8. It’s still 6.55-inches on the diagonal, with a tall and thin 20:9 aspect ratio that I find nearly perfect, and it still sports the same 2400 x 1080 resolution and 402 PPI dot pitch. But the OnePlus 8T Fluid AMOLED display is flat, and not curved at the edges, and I very much prefer flat displays. It also offers a fast 120 Hz refresh rate, as opposed to the more standard 60 Hz, enabling smoother scrolling and animations. 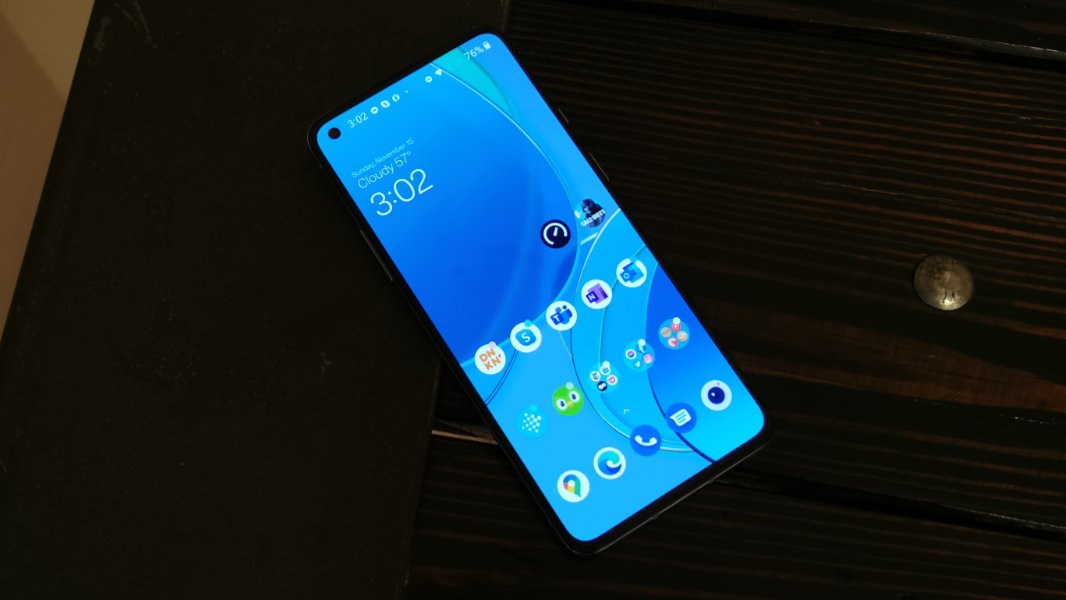 As good, the display is wonderful in day-to-day use, with deep blanks and pleasant HDR color pop. It has tiny bezels, a non-distracting hole-punch selfie camera, and none of the reliability issues that plague even the best curved displays. 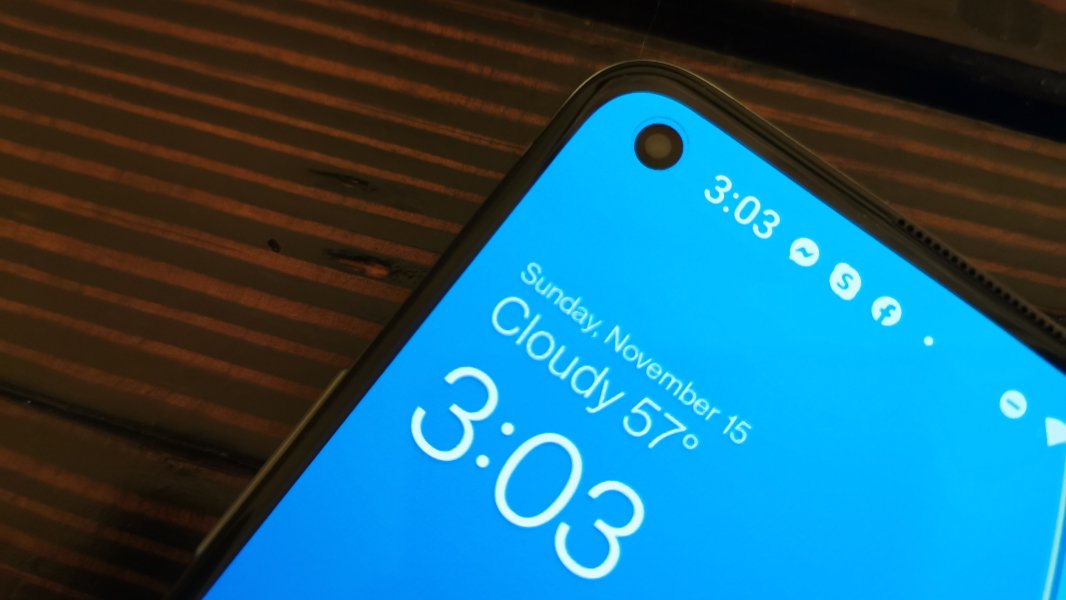 Put simply, the OnePlus 8T display is just about perfect. 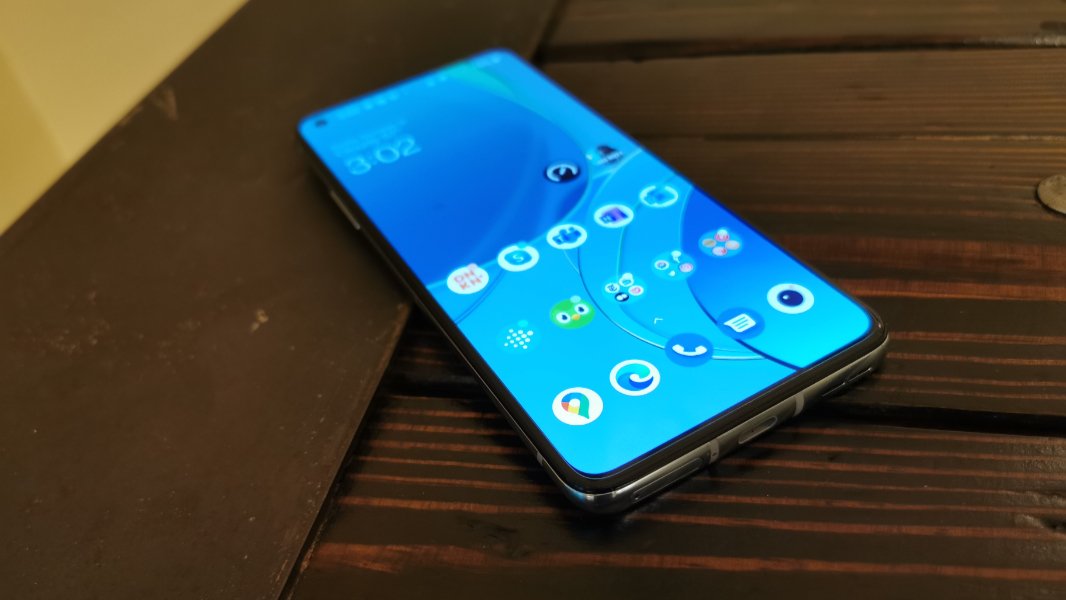 Internally, the OnePlus 8T is powered by mostly modern components, including a Qualcomm Snapdragon 865 processor, Adreno 650 graphics, 12 GB of LPDDR4X RAM, and 256 GB of very fast two-lane UFS 3.1 storage. As with the OnePlus 8 and 8 Pro, the OnePlus 8T also comes with Qualcomm’s Snapdragon X55 and its second-generation 5G modem, enabling worldwide 5G compatibility, plus Wi-Fi 6, Bluetooth 5.1, and NFC.

This is mostly excellent, of course, and should be viable for years to come. But I’m surprised OnePlus didn’t upgrade the processor to the newer and slightly faster 865+, and there’s no storage expansion to be had. 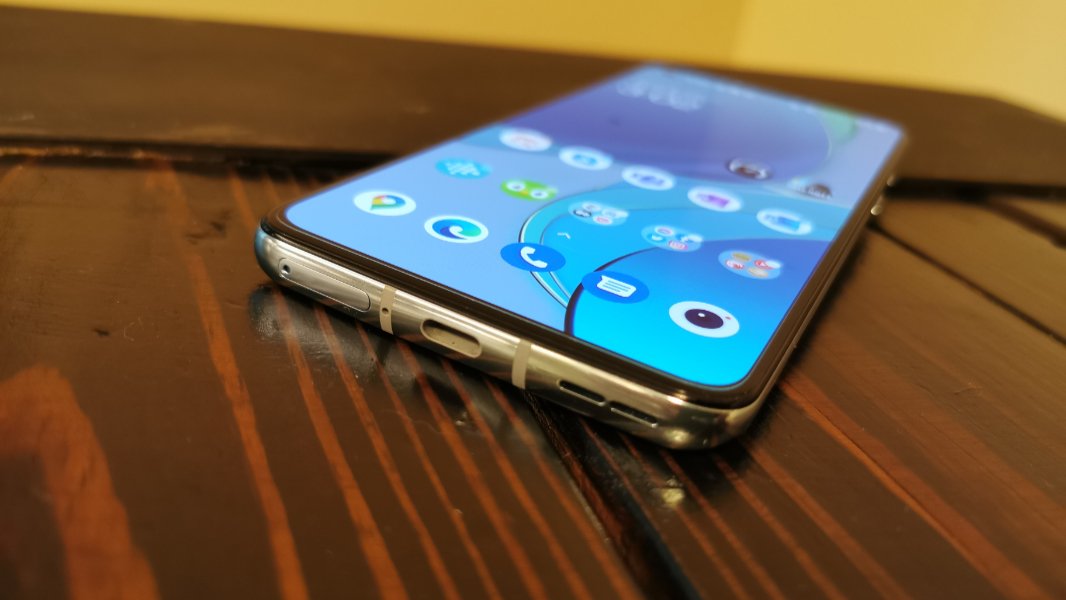 The AV experience is excellent. Between the device’s gorgeous display, the strong stereo speakers, and Dolby Atmos support, it’s easy to get lost in video content, especially. And it was a joy using this handset to watch movies on the elliptical trainer at the gym. That said, there’s no headphone jack, if that’s an issue for you. (I’ve long since moved on to wireless earbuds.)

Call quality is also excellent, but the OnePlus 8T doesn’t come with an IP rating for water and dust resistance. My guess is that it’s actually pretty resistant given that the version sold through T-Mobile only does have an IP68 rating. But … there’s no guarantee. That’s a weird omission.

With its very large 4,500 mAh battery—really, two 2250 mAh batteries, and a step up from the 4,300 mAh unit in its predecessor—the OnePlus 8T had no issues getting me through entire days of uptime and then some. As good, this is the first OnePlus handset to ship with a 65-watt Warp Charge 65 fast charger. That upgrade, combined with the 8T’s unique dual-battery design, means you can fully charge the battery from flat dead to 100 percent in under 40 minutes. I’ve charged it from 40 percent to 100 percent in under 25 minutes. 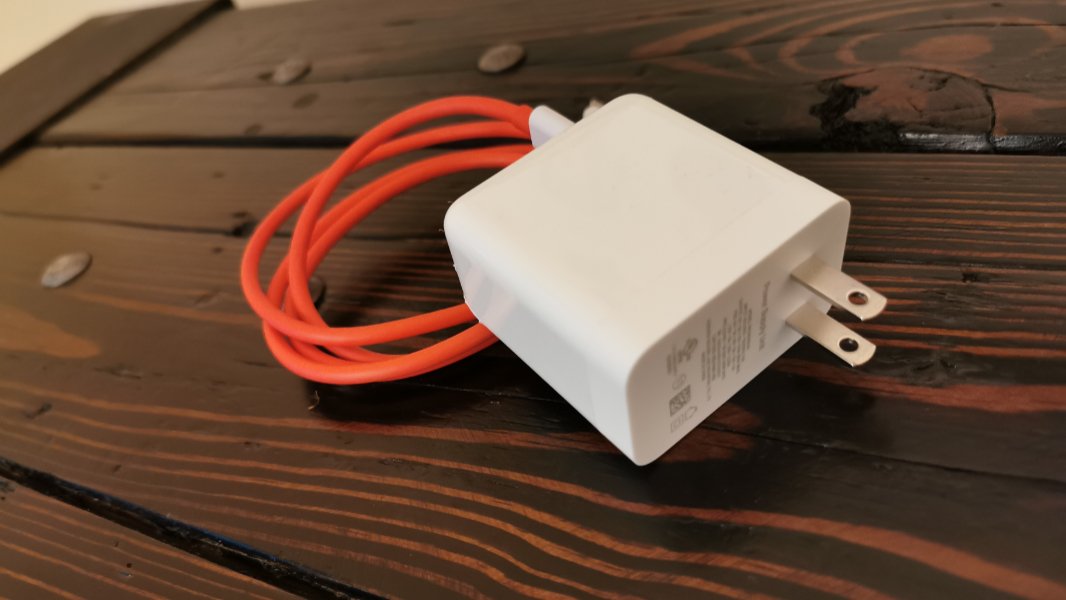 And if you’re away from home and have to use a third-party charger, there’s more good news: You can still get up to 27-watts of charging power depending on the charger, OnePlus says. In the bad news department, the OnePlus 8T inexplicably does not include wireless charging of any kind, a curious omission.

As I wrote previously in Inconsistency (Premium), the OnePlus 8T camera system is the Achilles heel of this product, with inconsistent shot quality. It’s unclear to me why OnePlus can’t offer a better camera experience than it does, but I suspect it’s a combination of the wrong hardware, unexceptional software, and a lack of computational photography expertise. Whatever the problem, it’s real: Oftentimes, I’ll look at my shots on the web later with a bigger screen and realize that many of them are unacceptable. 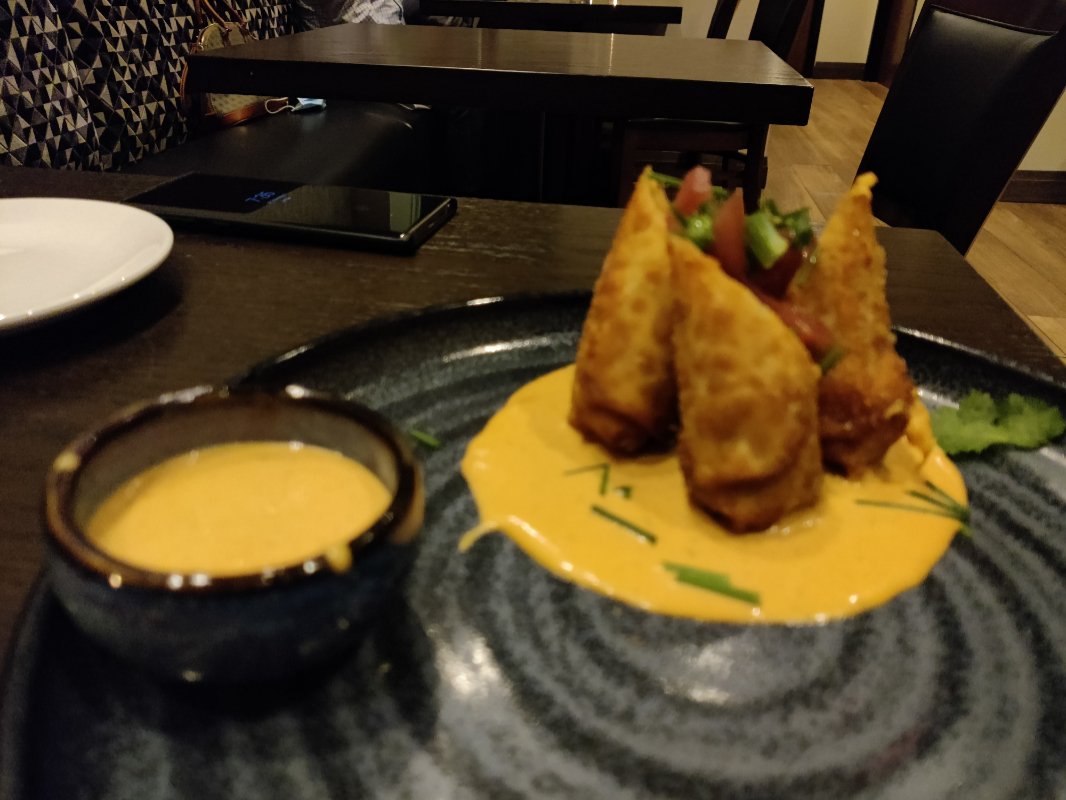 I guess it focused on the background for some reason

From a hardware perspective, the OnePlus 8T provides what I think of as a two-lens camera system: There’s a 48 MP main (wide) lens with an f/1.7 aperture and optical image stabilization (OIS) and a 16 MP ultra-wide lens with a 123-degree field of view and an f/2.2 aperture. 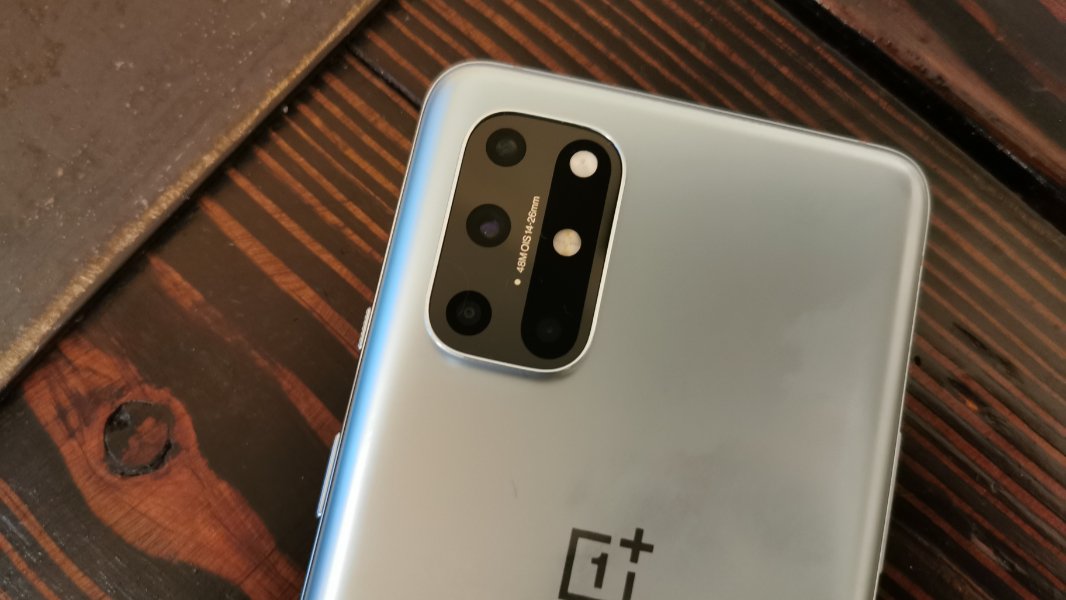 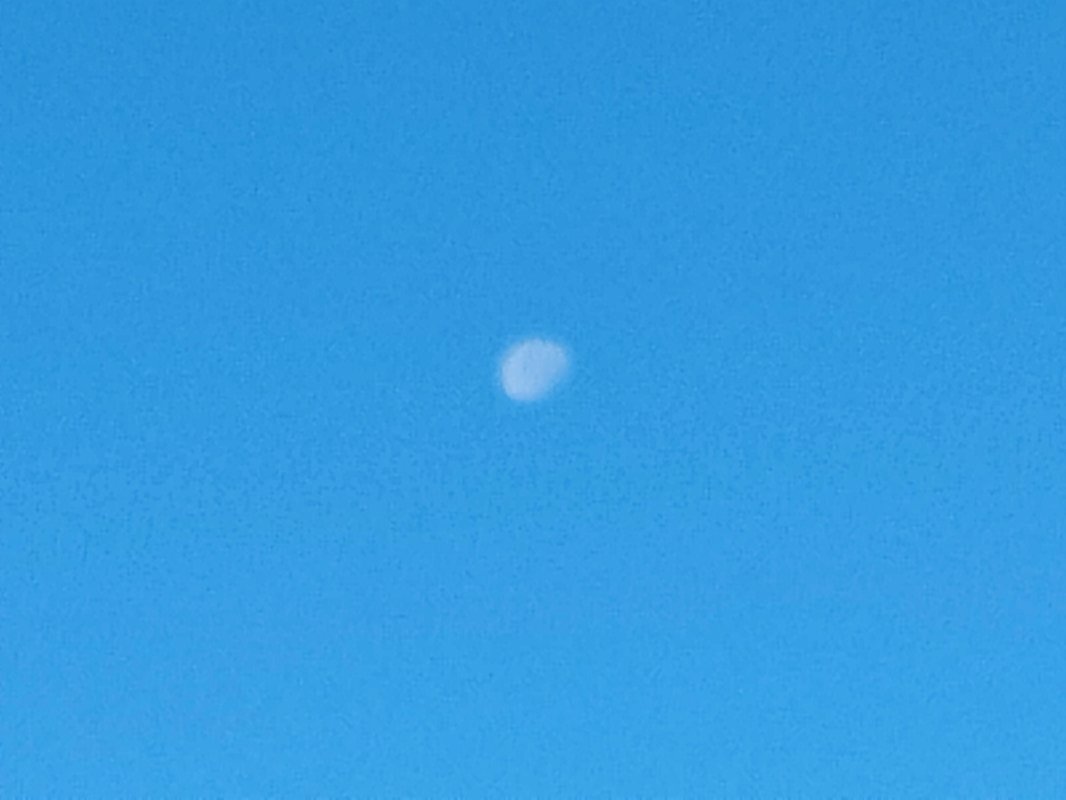 I would normally spend a lot of time on the camera system, but in this case it’s a waste of time. Because of the inconsistencies, I stopped using the OnePlus 8T for photos about halfway through my normal testing process. It was just too disappointing, considering the high-quality shots one could get with the similarly priced Samsung Galaxy S20 F3, Google Pixel 5 and 4a (5G), and Apple iPhone 12/12 Mini. 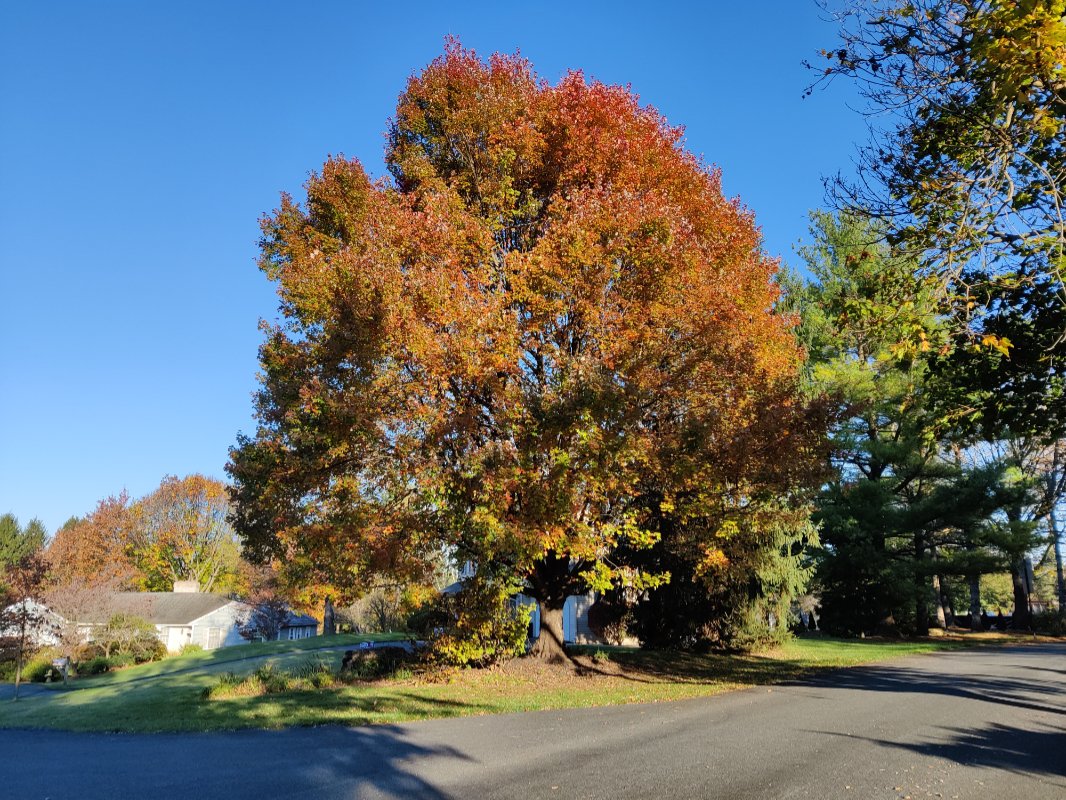 Yes, many of the shots came out of fine, or even very good in the right conditions. But the unpredictable quality really sunk the camera experience for me. 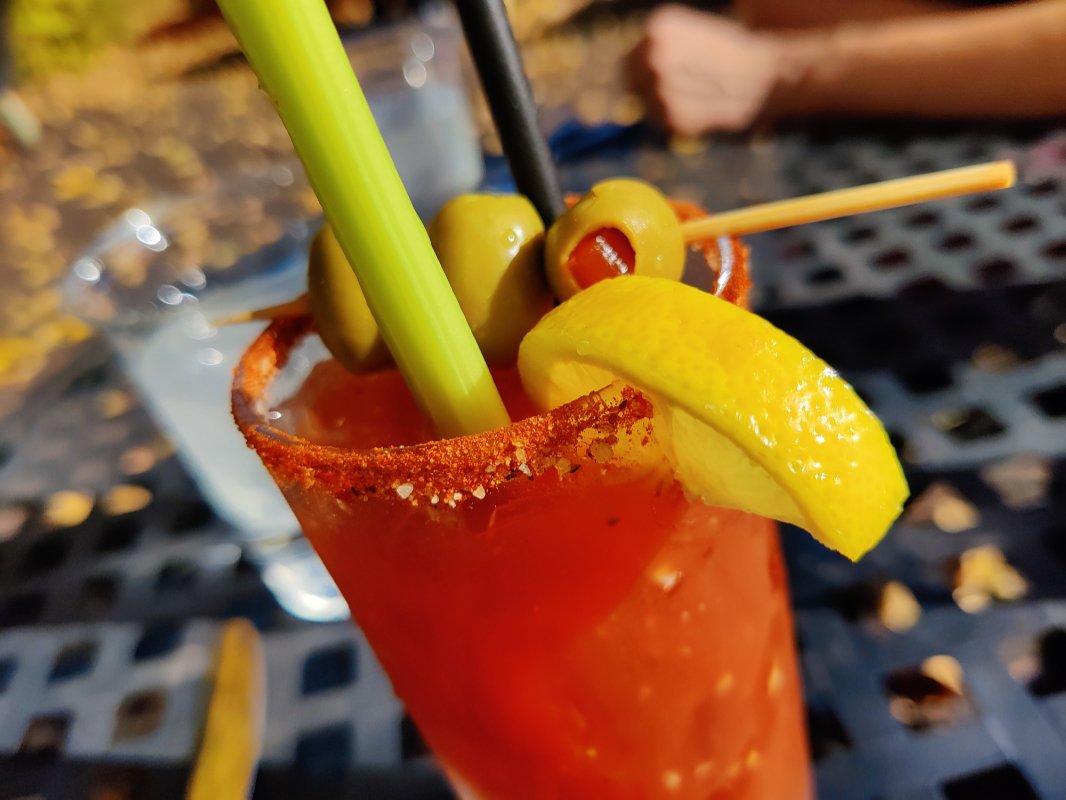 As with the OnePlus 8 and 8 Pro, the OnePlus 8T features a super in-display fingerprint reader that I find to be among the fastest and most reliable available. This is particularly handy in 2020, when a pandemic has forced us all to wear facial recognition-defeating facemasks. But even in normal times, I really like this system.

As with previous OnePlus handsets, the OnePlus 8T provides a unique OnePlus alert slider that sits above the power button on the right side of the device and lets you toggle the phone between three alert modes—ring (the default), vibrate, and silent—without needing the device to be on or signed-in. I wish every Android handset had this feature. 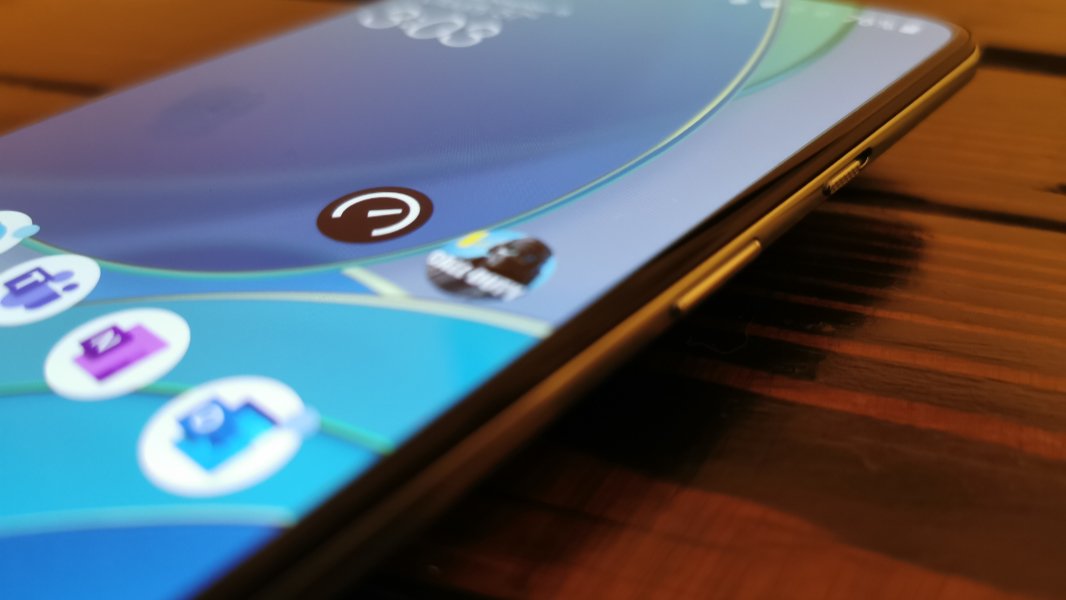 The OnePlus 8T is the first non-Google handset to ship with Android 11, in this case in the form of OxygenOS 11, OnePlus’s optimized take on the platform. OxygenOS is a key differentiator for OnePlus and its customers, and it’s even better than the Pixel version of Android that Google provides on its own handsets.

Of course, OxygenOS has always offered a highly-optimized and efficient experience. But with this latest version, OnePlus is doing more than ever before to visually differentiate its software when compared to stock Android. So in addition to all of the normal customization options, OxygenOS 11 also provides a new look and feel in select apps—like Gallery, Weather, and others—that provides Windows Phone-like layouts in which there is a lot of white space and the selectable on-screen items are all towards the bottom of the display where they are easier to reach with one hand. 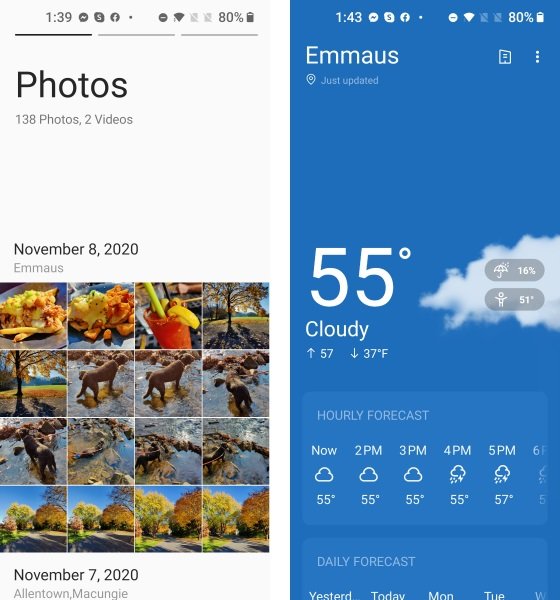 I normally like this kind of thing, but because OnePlus doesn’t even try to replace most of the built-in Android apps with its own like, say, Samsung does, the experience is inconsistent. And with OnePlus using more stock Android apps in this handset—the phone and messaging apps are now Google’s, which I prefer—this feels even more confusing.

OnePlus also added a selection of what it calls clock faces for the handset’s Always On Display (AOD), providing you with new customization options for what you’ll see when the display is otherwise off and the device isn’t actively being used. There’s an Insight AOD that visually shows you how often you’ve unlocked the phone that day in an effort to get you to do so less often, a Canvas AOD that requires you to use a photo of a person as your lock screen and home wallpaper so that it can create a line-sketch version of the image for the AOD, and a Bitmoji AOD. I like the idea of customizing the AOD, but neither of the current options is particularly compelling at the moment.

The OnePlus 8T is available in just one configuration in the U.S.—with 12 GB of RAM and 256 GB of storage—and costs $749. It is widely available now.

I wanted to love the OnePlus 8T, and there is certainly a lot to recommend here, from its epic fast-charging capabilities to the gorgeous and flat OLED display and the incredible optimized performance. But if camera quality and/or wireless charging matters to you, the OnePlus 8T is a non-starter. Its camera system is middling at best, with inconsistent results and no optical zoom. And while 65-watt fast charging is a breathtaking peek at the future, the lack of wireless charging is an embarrassing throwback to the past.

If those two features don’t matter much to you, then the OnePlus 8T is an interesting stutter-step forward from the original OnePlus 8, thanks to its superior display and fast-charging. Whether it’s enough of a step forward, given that the 8T arrived a scant 6 months after its predecessor, is debatable. But the OnePlus 8T falls short of the OnePlus 8 Pro, for sure, and offers no real competition to the Apple iPhone 12.

Overall, there are just too many compromises and missteps here.